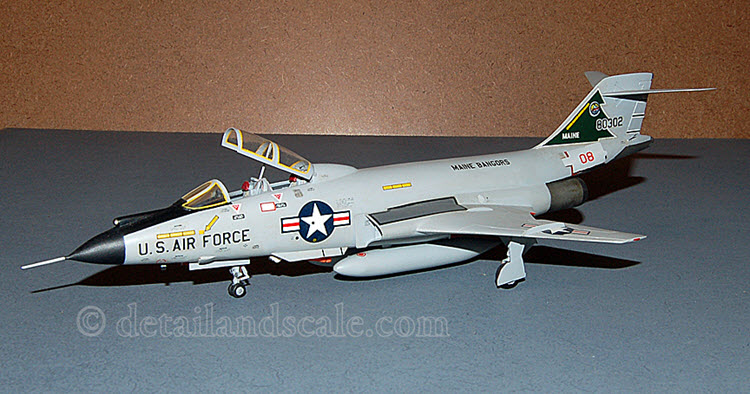 This model was built in the 1970s before the Revell 1/72nd scale kit of the F-101B was released.  The basic kit used was the Hasegawa RF-101C, and the canopy from an Airmodel conversion kit was used to vacuform a thinner and more clear canopy from clear plastic card.  The part from the Airmodel kit was used for the fairing aft of the canopy.  All other changes were made from scratch or by modifying kit parts.  Two Hasegawa RF-101C kits were used in the process.

The nose was removed from the Hasegawa RF-101C kit forward of the fuselage, and the nose from an old Revell near-1/72nd scale F-101A kit was used as the basis for the rework of the forward fuselage.  A considerable amount of building up and reshaping was required, particularly on the sides of the nose to have it mate seamlessly with the fuselage.  A pitot probe was added to the front of the nose using thin plastic rod, and the IR sensor was added to the top of the nose section.  This was fashioned out of a 1/72nd scale Sparrow missile body.  The blade antenna forward of the nose gear was made from very thin plastic card.  The small scoop on the lower left side of the nose was made from thicker plastic card, and thin card was used to make the strakes on either side of the rotating missile door.  A hole was cut in the left side of the fuselage below the aft cockpit, and clear plastic was added to make the identification light.

The cockpit from a second Hasegawa RF-101C kit was used to add the basis of the aft cockpit after the fuselage was cut out to accept it.  The rear instrument panel, including the large radar scope, and other details in the aft cockpit were made from scratch using plastic card and rods.  The front cockpit was also modified to represent the one in the F-101B, and details were added.  Hinges were added to the canopy to display it in the open position, and a plastic rod was used for the support that holds it in that position.  Two AiM-4D Falcon missiles were added beneath the forward fuselage.  These were obtained from a Hasegawa F-4E Phantom kit.  The missiles were reworked to add detailing for the control fins and the hinges that attach them to the wings.

The fuel tanks from two Hasegawa RF-101C kits were assembled and then cut in different places.  One set was cut about at the midpoint, while the second set was cut aft of the midpoint.  The longer forward sections from the second set of tanks were then glued together to aft section of the first set to form the longer external fuel tanks used on the F-101B.  Under the engine areas, the cooling scoops for the engine compartments were made from layers of plastic card and added in the appropriate places.  The flaps were cut off the wings, and the interiors were detailed so they could be displayed in the open position.  The longer afterburners used on the F-101B were made by using two RF-101C afterburners for each new can.  One RF-101C burner can was shortened at the aft end, while the second was opened at the forward end, so that the interior of the can would be open into the shortened can when the two were joined.  The two were then glued together, and the fairings for the convergent/divergent nozzles were removed.  This resulted in an accurate representation of the F-101B’s afterburner cans.

In completing this conversion, two changes were not made.  First, the engine inlets on the F-101B are a bit different from those on single-seat Voodoos.  They angle aft from top to bottom, as does the inlet ramp.  This could not be accomplished effectively without major plastic surgery, so they were left as is.  The other change that was not done was that the main landing gear has a wider wheel and tire on the F-101B, and as a result, there are bulges in the gear doors and the area around where they close on the fuselage.  This would be rather small in 1/72nd scale, and a suitable substitute wheel and tire could not be located.  So the landing gear was not modified.

With the Revell 1/72nd scale kit now available, it’s possible to build a much better F-101B model more easily than doing this conversion, but this old conversion effort remains a favorite in the Detail & Scale Collection.

A photo of this model appeared in both the original small 48 page version of “F-101 Voodoo in Detail & Scale,” and the expanded 72-page reissue of the same title.  The latter release was Detail & Scale Series, Volume 21. 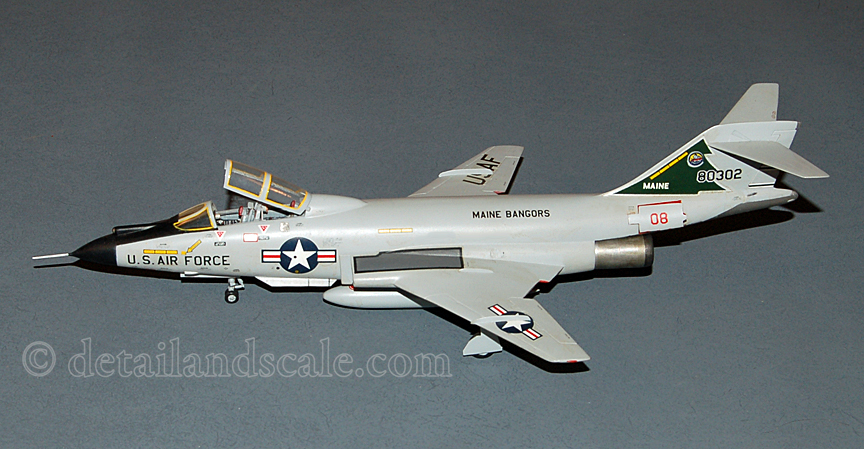 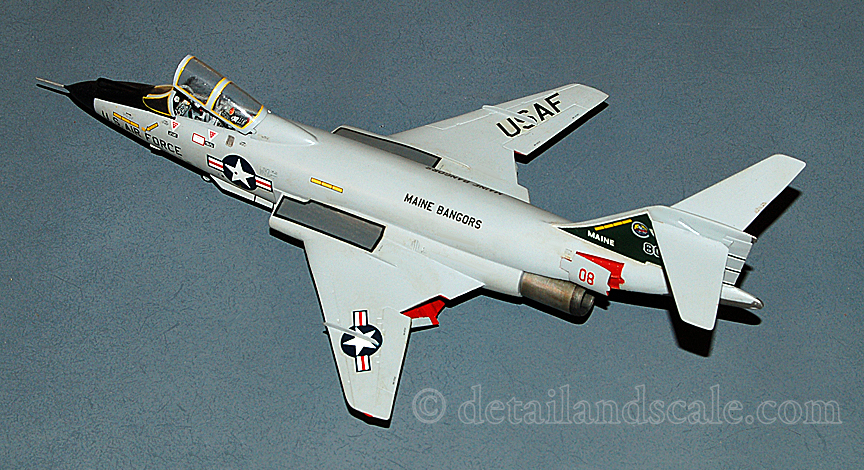 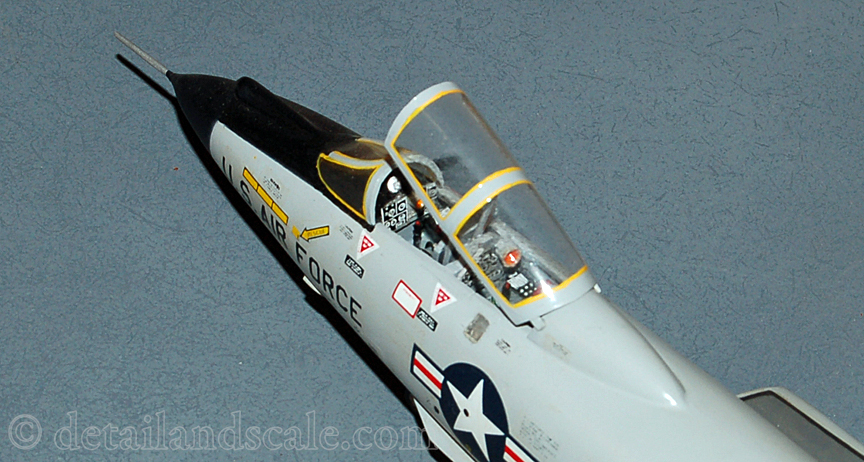 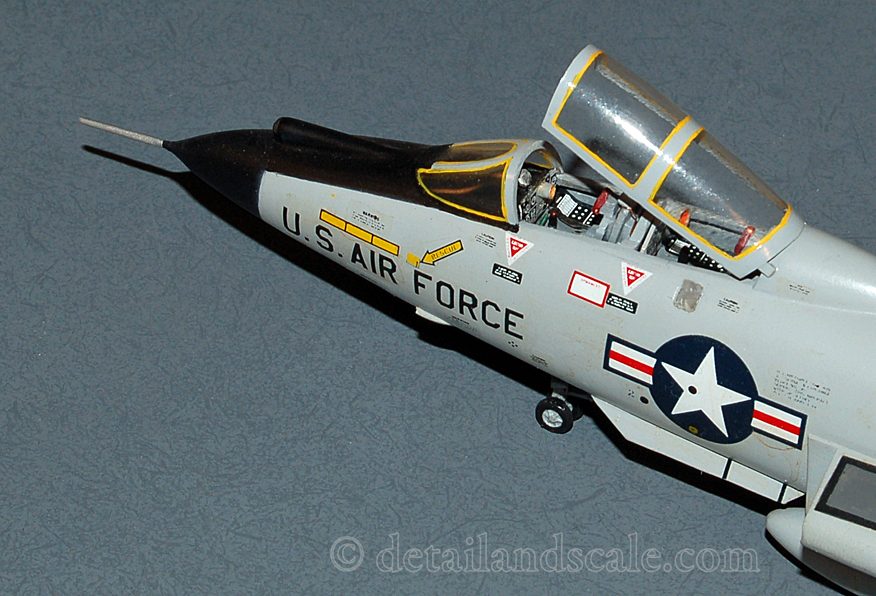 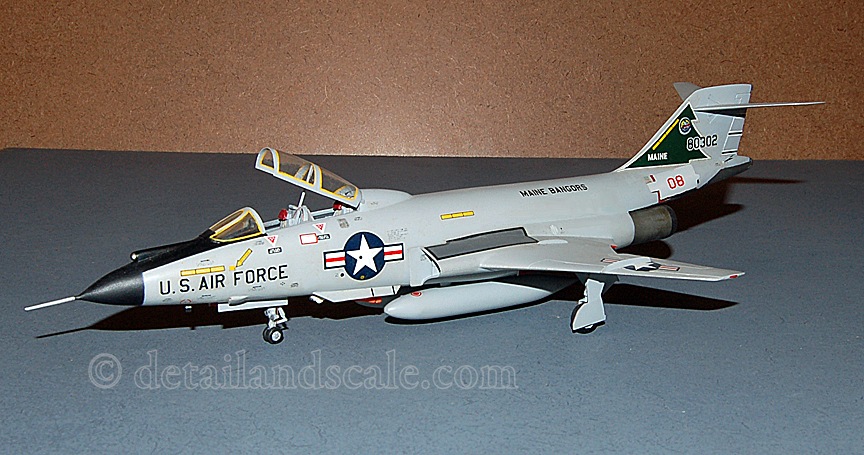 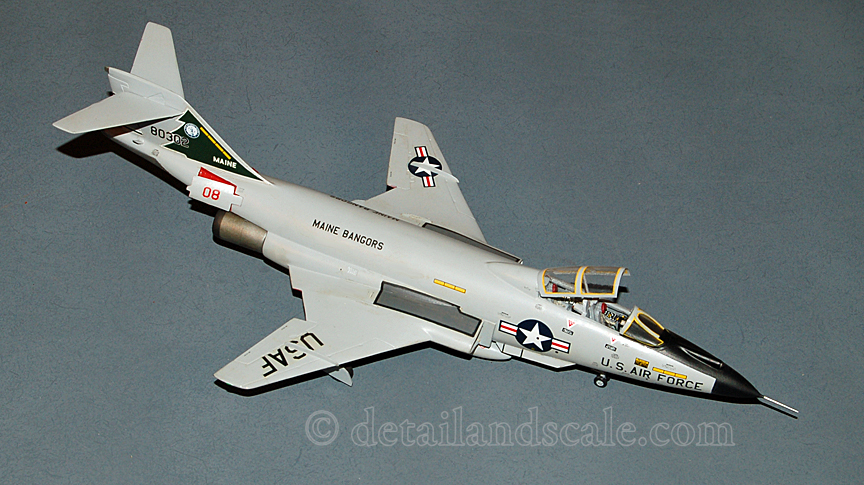 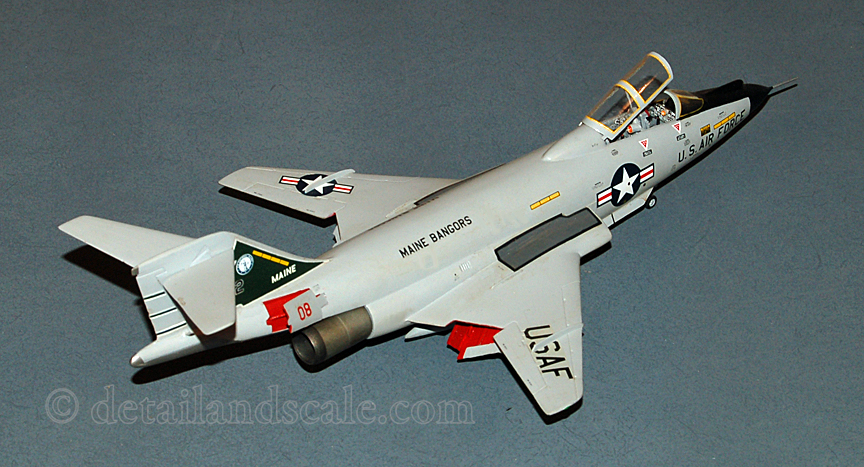 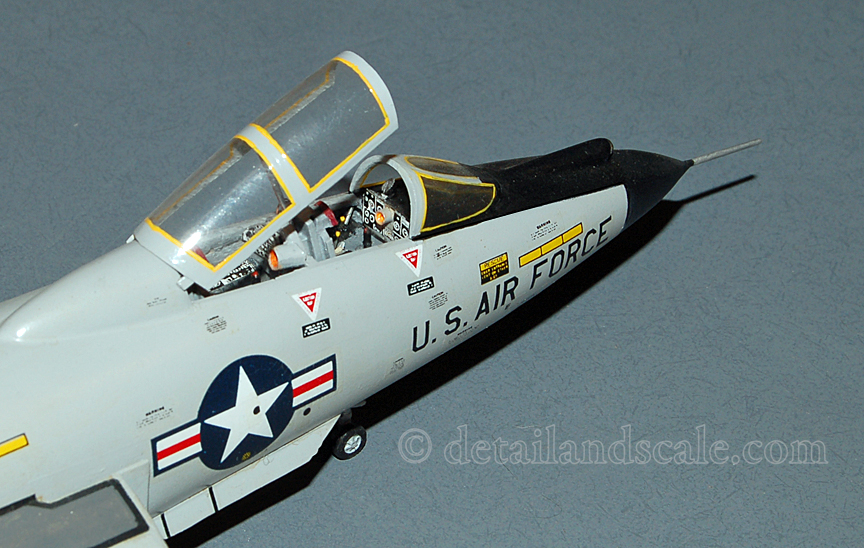 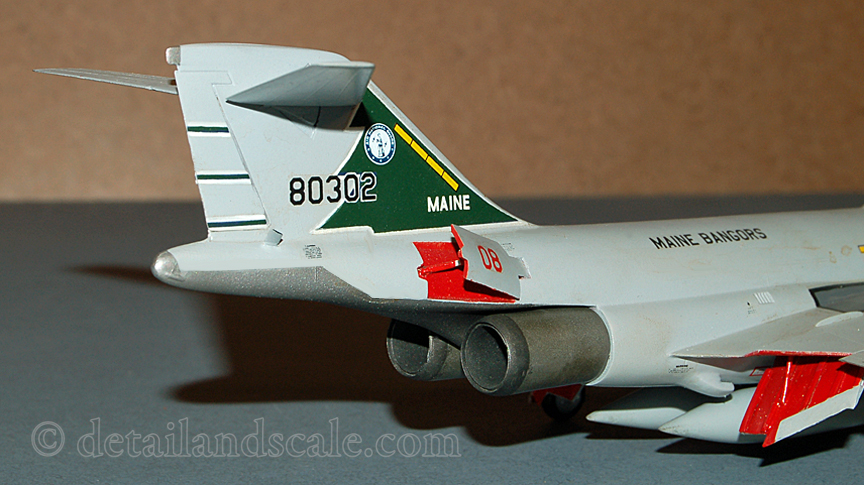 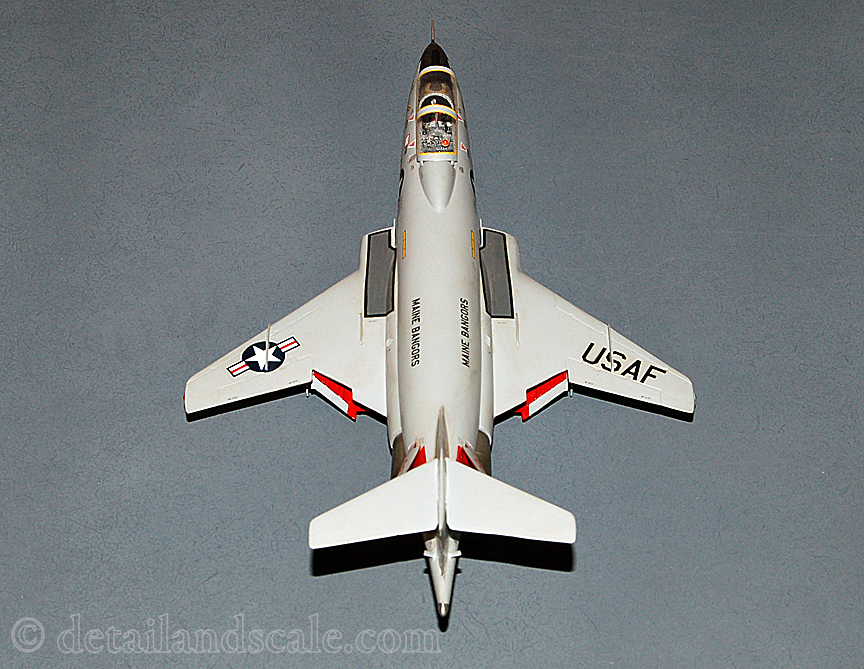 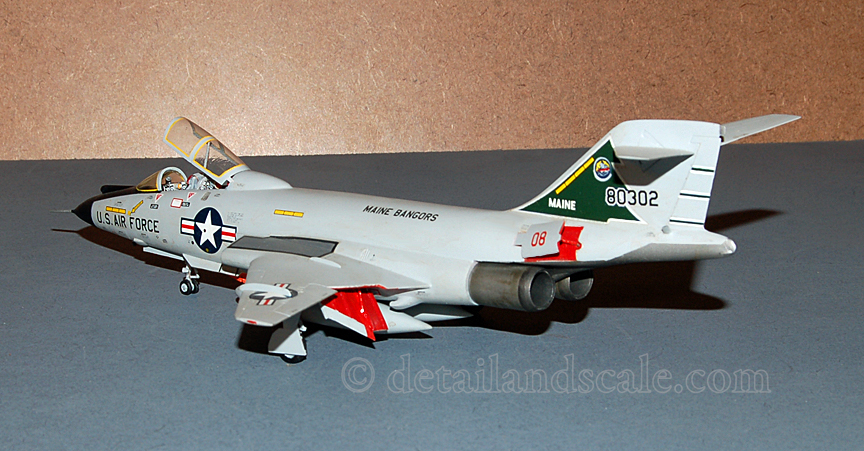 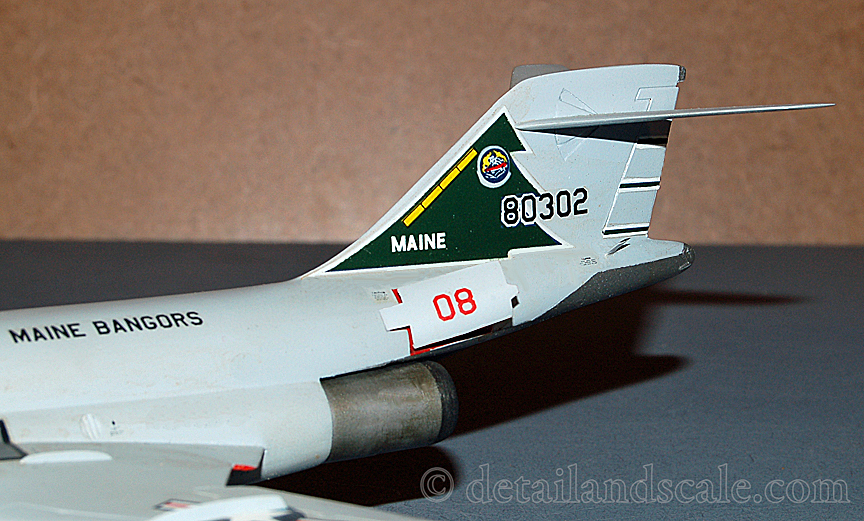 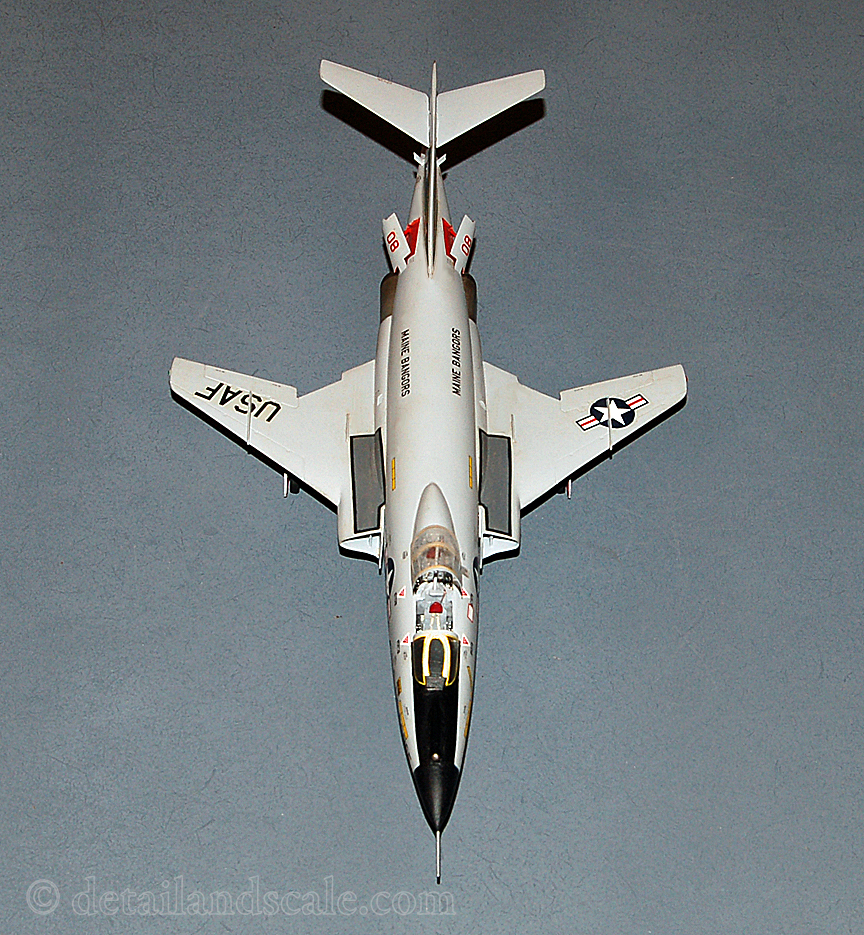 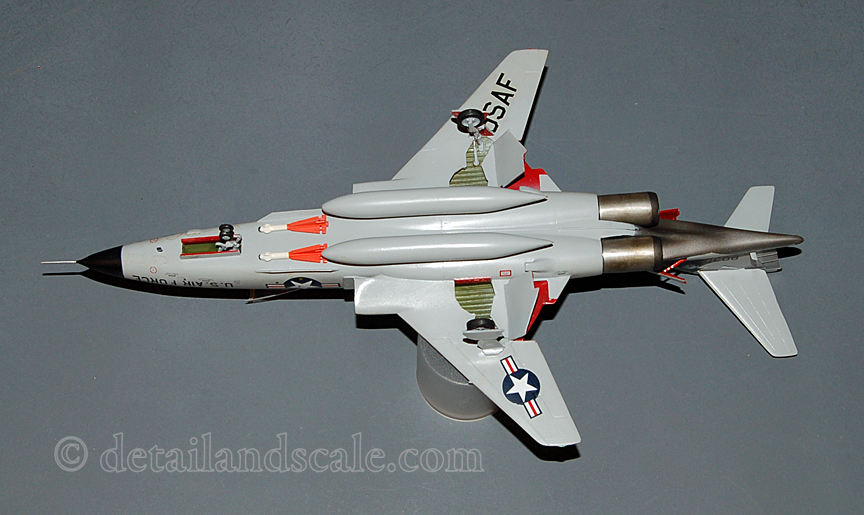