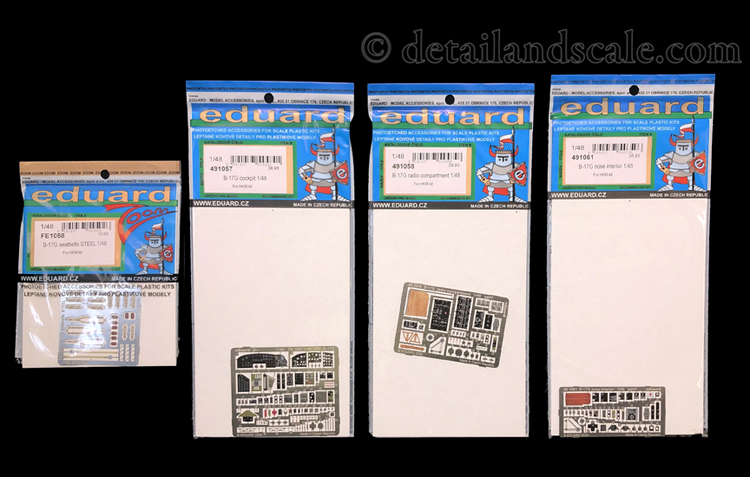 In 2019, the first new-tool 1:48 B-17G Flying Fortress kit in over 40 years was released by HK Models.  While it is not flawless, it indeed outshines the classic Monogram and Revell Flying Fortress kits in many ways (and you can read our detailed review of the HK Models 1:48 scale B-17G HERE.)  In customary fashion, Eduard developed and released a range of detail sets to bring a really exceptional level of detail to the HK B-17G.  We have divided these fourteen different photoetched metal and cast resin detail sets into five separate reviews, starting with the forward fuselage, covering here the bombardier and navigator’s stations, cockpit, seatbelts, and the radio operator’s compartment.  For various reasons, we cover the massive PE set for the bomb bay in another review with the even larger PE metal landing flaps set in Part 3 of this review series which you can read HERE.

Eduard # 491061 B-17G Nose Interior (MSRP: $26.95):  The bombardier and navigator’s stations are right up front and highly visible in 1:48 scale, and this set will add a high level of detail where it really matters visually.  This set contains two photoetched metal frets. One is pre-painted with 40 parts, and the other fret is unpainted with 73 parts.  Parts are provided between the two frets for the Norden bombsight, the bomb rack and salvo release controls, and bombardier’s control and instrument panel.  The navigator’s wooden tabletop is provided as a beautiful pre-painted part, and the navigator’s various tools (e.g., a dead-reckoning analog computer, a large course-plotting protractor) feature amazingly fine pre-painted detail.  Various details for the .50-caliber machine guns include ring sights, ring latches, ammunition belts (or cartridge chutes, more properly), and ammunition boxes.  Many other small details range from headsets to the First Aid box cover, and many other small structural details such as gear associated with the astrodome, data placards, and so forth.  Do note a few of the links of the cartridge chutes were a little bent in my sample, but a little careful attention with a PE metal folding tool should fix that right up.

Eduard # 491057 B-17G Cockpit (MSRP: $36.95): the HK B-17G kit cockpit is okay for injection molding, but there are a lot of details that could either be better or that are simply missing.  Further, the kit instrument panel, in particular, is fairly basic.  This set contains two frets.  One is pre-painted and contains 99 parts, while the other fret holds 41 unpainted parts.  This set offers a very impressive upgrade for the cockpit.  The pre-painted parts are up to Eduard’s high standard of pre-painting, both in quality and detail.  The instrument panel is the centerpiece of this set.  The detail here is exceptional, and also includes Eduard’s “raised glass” dial effect.  The throttle quadrant on the center console is included, as well as a complete set of the pilot and co-pilot sidewall details, the cockpit ceiling controls, the center console, throttle quadrant, throttles, rudder pedals, trim wheels, and the automatic flight control equipment.  Various handles, levels, the cockpit floor, headsets, and even the “Boeing” logo on the center of the yokes are provided.  Other details cover the flight engineer’s station and the top turret. It is all quite extensive and very impressive.  Just note that a few of the smallest parts are very small.  Handle with care.

Eduard #FE1058 B-17G Seatbelts (MSRP: $10.95): the HK kit could have done a lot better in representing seatbelts, and that is where this STEEL seatbelt set comes in.  Here, 37 parts provide all the seatbelts/harnesses/lap belts for the entire Flying Fortress interior.  These, of course, include the bombardier and navigator’s seats, the pilot and co-pilot’s seats, the radio operator’s seat, and even the tail gunner’s seat.  The quality of this set is typical for a pre-painted Eduard set and features their signature pre-painted work, right down to fine stitching details and some shading effects.  They look great and compare very well to my references.