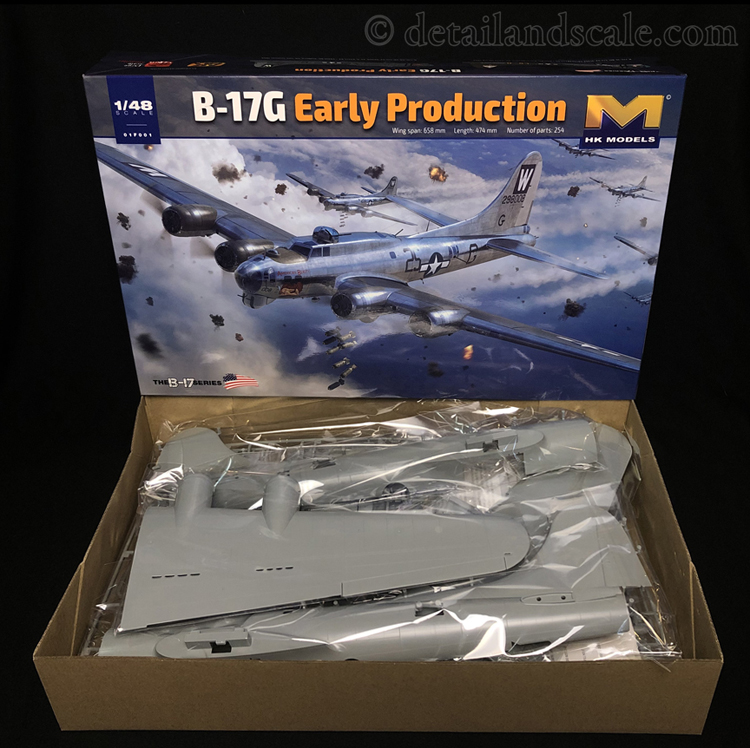 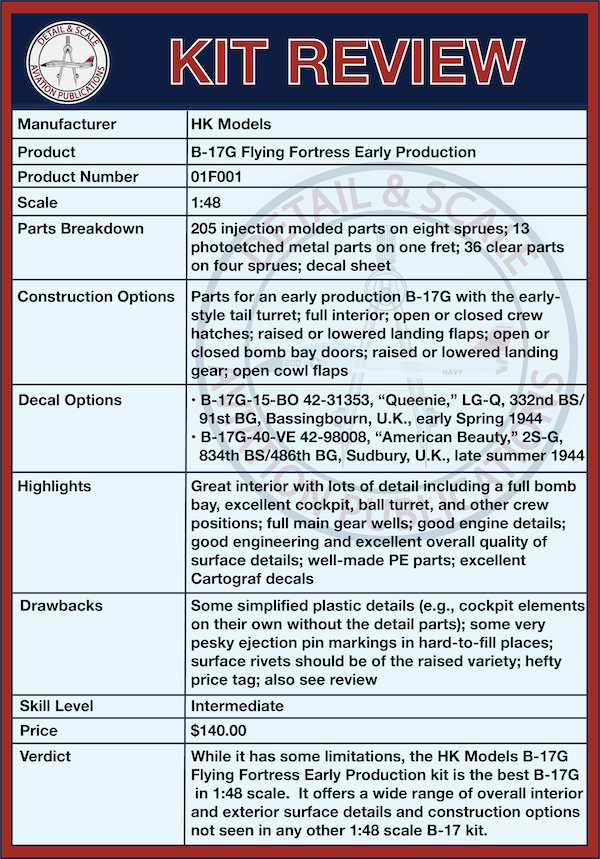 The Boeing B-17G Flying Fortress was one of the most iconic and legendary aircraft of all time.  Its singular role in the Second World War shaped the course of the conflict.  There have been many kits of the mighty Flying Fortress over the years.  Of these, the 1976 Monogram 1:48 scale B-17G is one of the most classic plastic scale models in history.  It is surely iconic, but it has not aged well.  With a lot of work, one can still do great things with that kit, but your starting point compares poorly to the design, engineering, detail, and molding technology seen today’s best kits.  Following many years of scale modelers asking the industry to produce a modern 1:48 scale B-17, Hong Kong Models (or HK Models) finally released a new-tool B-17G in late 2019.  Here, we review this new kit in what promises to be the first in a family of releases.

The B-17 Flying Fortress was a four-engine heavy bomber developed in the 1930s for the United States Army Air Corps.  It evolved from the prototype Model 299 to the YB-17, YB-17A, B-17B, B-17C, and B-17D.  Taking to the skies in September 1941, the B-17E represented the first major upgrade beyond those early versions.  The fuselage was extended by 10 feet while the vertical and horizontal stabilizers were significantly enlarged and the B-17’s famous tail profile was achieved.  A tail gunner, top turret, and a manned ventral ball turret were added.  The larger size and greater weight were offset by significantly upgraded Wright Cyclone engines.  The B-17F was a further improved derivation of the -E.

During the early days of WWII, the B-17E and -F saw combat in the Pacific attacking Japanese shipping, airfields, and other targets of opportunity.  In Europe, the B-17Fs were soon employed by the USAAF in daylight strategic bombing against German industrial and military targets.  In the face of intense German resistance and initially devastating losses, B-17 and B-24 bombing progressively contributed to the degradation of German industrial activity, war production output, and overall warfighting capability all the way to VE-Day.

The B-17G was the definitive Flying Fortress, incorporating improvements upon the B-17F.  Crews of ten men were carried aloft by four Wright R-1820-97 Cyclone turbosupercharged radial engines.  The B-17G could reach speeds up to 287 mph, though it cruised about 100 mph slower.  The Fort had a range of about 1,700 miles with a full bomb load of 4,500 pounds and a service ceiling of 35,000 feet.  Externally, the B-17G was characterized by its distinctive Bendix twin machine gun chin turret, bringing defensive armament to 13 M2 Browning .50-caliber machine guns distributed across nine positions around the airplane.  Late production blocks also featured a revised tail gun position known as the Cheyenne turret that provided a reflector sight and an expanded field of fire.  In all, 12,731 B-17s were produced, and nearly 8,700 of them were B-17Gs.  Today, less than 10 B-17Gs remain airworthy, but the Flying Fortress will forever hold an unforgettable place in the history of aviation and air warfare.

Strengths:  First things first: while the classic 1:48 scale Monogram B-17G will always have a place in our hearts, the HK Models B-17G kit is indeed a better B-17G in multiple respects.  HK Models also appears have drawn significantly on their earlier design work with their the 1:32 scale B-17F/G kits, and they have applied here an analogous approach to design, parts breakdown, and detailing.

Overall shape and size good (but see below).  Surface detailing is complex and rich (though technically it features one major inaccuracy; also see below) with beautifully executed recessed panel lines and rivet/fastener detail.  These exterior details will make many builders’ hearts go “pitter-patter” as they recall all the times they had wished the old Monogram kit had better and more accurate surface features.  Another very nice feature is the slide-and-lock mechanism for attaching the wings.  I test fit the wing-fuselage fit, which surely has a tight fit and produces the proper wing angle and alignment.  Also, I initially thought that the entire left and right wing were each some kind of whiz-bang slide molded single-piece part. When I opened the parts bag to inspect the wings, they were indeed upper and lower halves, but fitted together in a nearly airtight fashion.

The interior of the HK Models B-17G is rather excellent.  It offers a fidelity of detail and accuracy absent in the old Monogram kit.  This spans a complete and highly detailed interior from the Norden bombsight and bombardier and navigator’s stations to the flight deck, cockpit, a very well-detailed top turret, a full bomb bay, and the radio operator’s compartment.  Photoetched metal seatbelts add to the detail.  In the rear fuselage, you have a full Sperry ball-turret assembly and rig, nice waist gunners positions including the floor planking, the tail wheel well, and the tail gunners position that features ammo boxes, guns, and the gunsight.  The forward crew access hatch and tail entry door can also be positioned opened or closed.

The four Wright R-1820-97 Cyclone engines look good, from the shape of the props to the cylinder details, superchargers, and cowl flaps which are molded here in the open position (closed cowl flaps are not an option in this kit).  Both main gear wheel wells are provided as complete assemblies – which is a major improvement over the old Monogram kit.  While the detail in the main gear wells are simplified in terms of plumbing, all the basics are there, including the big engine oil tank.  Alternate main landing gear parts are provided for either a wheels-up or wheels-down configuration.  Landing flaps can also be positioned up or down.

The clear parts are optically flawless and just perfectly manufactured.  The nose glass is actually on its own sprue and has a clear, protective self-adhesive covering on its surface to make sure it doesn’t get damaged in the box.  The marking schemes and decals look great, with one olive drab-over-gray and one natural metal B-17G to choose from.  Cartograf printed the decals.  Decal quality is fantastic, and the nose art especially is printed to their high standards.  Of course, if you don’t like Queenie or American Dream, there’s a seemingly endless set of alternative markings that can be found on the aftermarket decal scene.

Weaknesses:  This is a really good kit with a multitude of advantages that supersede the old Monogram kit.  Still, it’s not perfect.  It’s not cheap, and with an MSRP of $140, that can be off-putting.  Still, I have seen this kit go for around $110 with some retailers.  Shop around…

The shape of the aft fuselage may be a little off in that it may be too spherical in cross section rather than oval as it tapers back toward the tail. Watch out for unsightly ejection pin markings on several parts, most visibly on the undersides of the bomb bay doors and on the upper and lower surfaces of the landing flaps.  In these cases, the ejection pin marks are deep inside and between raised structural elements which makes eliminating them pretty time consuming and a pain in the backside.  Also – because the fuselage halves were not molded on a sprue but as single injection-molded parts, there are a lot of physical plastic injection points still attached the to the upper fuselage halves.  These extend over to the inside surfaces of the seams between halves and need to be cleaned up and sanded smooth to achieve anything even nearing a proper fit.  Take your time here.

The Browning .50-caliber machine guns are pretty good, but the perforated cooling jackets around the barrels are a little simplified and, in some cases, they are quite shallow.  There is also a total lack of ammo feed belts to the guns.  They could have been good to include as photoetched metal parts.  The shell collection bags fitted to the top turret appear to be missing.  Photoetched details are provided for two oil cooler intake screens per wing, but if memory serves, the other air intakes on the leading edge of the wing also featured screens.  Here, those other intakes simply open to the hollow wing interior (pardon me while I cringe).

The instrument panel provides nothing for the detail painter to work with, as you only get raised instrument bezels with a featureless sunken instrument dial face.  I think they are trying to steer most builders to either use the instrument panel decal in the kit or to purchase an aftermarket photoetched metal set.  Also, the throttles are visibly absent. It’s nice to see details such as the large bottles of compressed breathing oxygen included here on the cockpit sidewalls, but they appear to be a bit undersized and inaccurately molded onto the sidewalls as a half-bottle.  I also think that the latrine (basically, a small, floor-mounted bucket between the tail gunner and waist gunners) was omitted here.

Of course – the one big thing, at least to me.  As someone who has worked a little on B-17s (about 12 years ago volunteering on the restoration of Champaign Lady, which is still ongoing in Ohio), I can say with first-hand experience that the surface of the B-17’s skin is covered in many thousands of raised dome-headed rivets.  While recessed rivets look great on the kit and are a de rigueur of modern kits, recessed rivets here are 100% inaccurate.  The same problem can be seen in HK’s 1:32 scale B-17s, various Trumpeter offerings such as their Dauntless kits, the Kitty Hawk T-28 Trojans, and more…

While the assembly instructions are very well printed and easy to read in grayscale, I am not a fan of the markings guide printed in grayscale.  Sure, these are not complex multi-color schemes, but still, color would make the painting and decaling process a lot more user-friendly.

Overall, the HK Models B-17G Flying Fortress Early Production kit is the best B-17G in 1:48 scale as it offers a wide range of overall excellent interior and exterior surface details and construction options not seen in any other 1:48 scale B-17 kit ever before.  Still, it has some limitations to consider.  Given the modular design of the nose and tail sections, we are quite likely to see future issues of this kit involving late production B-17Gs with the Cheyanne tail turret and the earlier, non-turreted noses of the B-17F and maybe even -E.  Already, aftermarket detail sets for this kit are coming out from Eduard and others, and there are a lot of decal sheets already available.  For many of us, this is the 1:48 scale B-17G that we’ve been waiting for all these years.  It’s not perfect, but opportunities and possibilities abound with the HK Models B-17G.

Sincere thanks are owed to Scott Bricker the review sample.  You can hopefully find this kit at your local hobby shop or from online retailers as Sprue Brothers, Hannants, Lucky Model, and others.