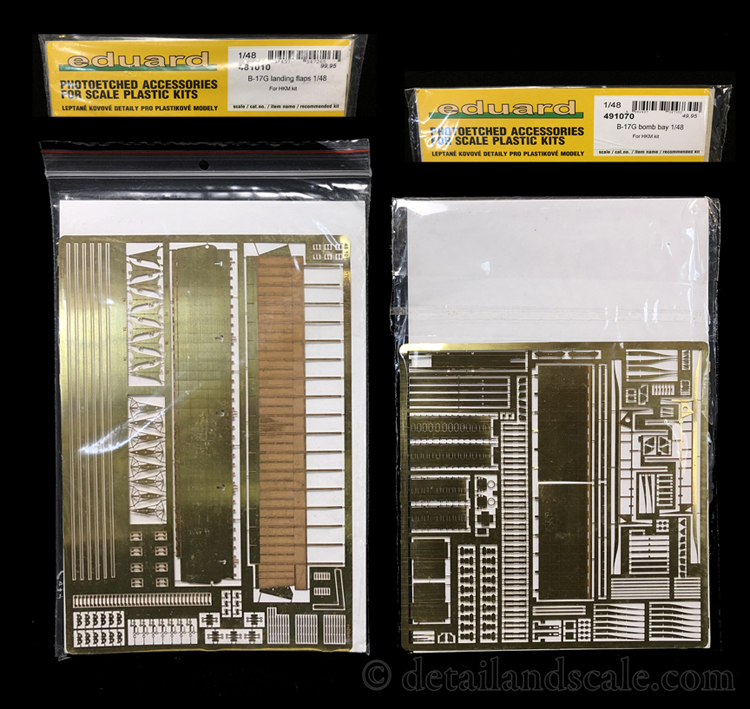 In 2019, the first new-tool 1:48 B-17G Flying Fortress kit in over 40 years was released by HK Models.  While it is not flawless, it indeed outshines the classic Monogram and Revell Flying Fortress kits (and you can read our detailed review of the HK Models 1:48 scale B-17G HERE).  Eduard developed and released more than one dozen detail sets to bring a really exceptional level of detail to the HK Models B-17G, and we have divided our reviews of these sets into five separate installments. Here in Part 3, we check out what could be called the “heavy metal” detail sets for this kit – Eduard’s massive landing flaps and bomb bay sets that pull out all the stops in terms of what photoetched metal detail parts can provide.

Eduard # 481010  B-17G Landing Flaps (MSRP: $99.95):  the B-17’s prominent landing flaps took up about half the span of most of the lower inboard section of the wing.  The kit has the option to drop the flaps – a nice touch, indeed – but the flap and wing detail is about as basic as it could be.  There are also some ejection pin marks between the wing spars.  Here, the detail-oriented scale modeler has an exceptionally extensive complete replacement for the flaps and inner wing details.

The detail here is a tad mind-bending and goes far beyond the kit.  The set is huge, physically, and in terms of parts count (over 400 parts for both sets of flaps).  It contains three frets, two of which are of the largest format size of photoetched frets that Eduard produces.  The set provides all the structural elements including the back end of the dozens of wing spars, the flap hinges, and the inner and outer surfaces of the flaps themselves.  The quality of manufacturing is matched only by the detail.  It is really outstanding.  When Eduard does a big set like this, they take the work quite seriously.  Note that the scale modeler will need to have their own supply of 1.5mm plastic rod to simulate the flap driveshafts.  Also note that the entirety of the kit’s upper wing flap detail will need to be removed (obviously) to accommodate this set. Furthermore, there is a lot of bending, shaping, and gluing of many very fine parts in this set.  I would consider the “skill level” of this set to be for the advanced scale modeler.  Experience working with photoetched metal parts is going to be important to pull this one off.  Use of a large photoetch metal bending tool will be invaluable during construction.

Eduard # 491070 B-17G Bomb Bay (MSRP: $49.95): the HK Models B-17G is the first 1:48 scale Flying Fortress kit that has a detailed bomb bay, and the bomb bay doors can be displayed in the open position to show off what’s inside.  The kit bomb bay is decent for injection molding, but there is definitely more detail that can be added.  That’s where this very extensive set comes in. It contains two photoetched metal frets.  The first is unpainted and holds 143 parts by my count, while a second, smaller, pre-painted fret holds another 73 parts.  There is a wealth of detail here from the front and rear bomb bay bulkhead details to a major upgrade to the bomb bay catwalk.  However, the real attractions are the details for the two V-shaped bomb racks.  There are parts for the inner and outer rack surfaces, the bomb rails, the bomb shackles, and the bomb hoist bracket.  Another highlight of the set is the PE metal bomb bay doors whose inner surface spars and ribs each build up out of about 22 individual parts.  The color PE parts represent the various data placards arrayed on the bomb racks and elsewhere in the bomb bay interior.  Again, experience with photoetched metal parts will help the scale modeler get the most out of this set, but it is not as involved or as daunting as the wing flap set.

Both of these sets will bring some high-level detail to your 1:48 scale HK B-17G.  Used together, they will enhance the potential of this kit in some very significant ways.  When I build my HK Flying Fortress, both of these sets will be used in this project.  As someone who enjoys working with photoetched metal detail parts, I really look forward to the challenge – and also the payoff – of building the wing flap set, especially.