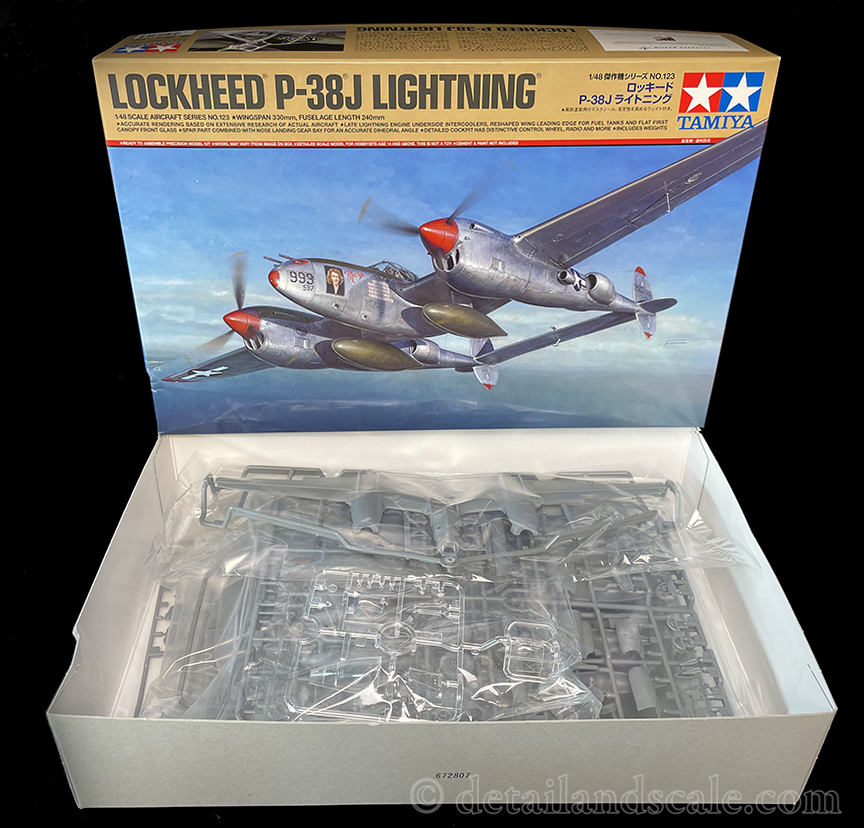 The Lockheed P-38 Lightning was one of the great fighter aircraft of World War II.  It also found renown as a fighter-bomber, night fighter, reconnaissance platform, a long-range escort fighter, and a pathfinder for bomber formations.  Many kits of the P-38 have been produced over the years.  Today, Monogram’s 1:48 scale P-38 can be cherished as a true “classic.”  Since the early 1990s, Hasegawa’s family of Lightnings represented the best P-38s in 1:48 scale.  Then, in 2019, Tamiya released a new-tool P-38F/G Lightning.  This kit was far superior to the Hasegawa P-38s.  It became an instant favorite, and it won the Detail & Scale Reader’s Choice Award for the best kit of that year.  In 2022, Tamiya’s second 1:48 scale Lightning was released: the P-38J.  During the development of this kit, Detail & Scale shared research materials with Tamiya.  Let’s see what Tamiya has come up with here.

The Lockheed P-38 emerged from a February 1937 request by the United States Army Air Corps (USAAC) for a twin-engine, high-altitude interceptor.  The Lockheed team, directed by Hall Hibbard and Clarence “Kelly” Johnson, developed an unconventional design featuring twin tail booms, tricycle landing gear, and central nacelle that housed the cockpit and the armament.  A pair of turbo-supercharged 1,000 hp counter-rotating 12-cylinder Allison V-1710 engines powered the new aircraft.  The first XP-38 first flew in January 1939.  It was the fastest production airplane in the skies at the time, reaching airspeeds in excess of 400 mph.  The first combat-ready production version was the P-38E.  Early Lightnings went into service with the USAAF, RAF, and the Free French Air Force operating in England.  The P-38 claimed its first air-to-air kills in August 1942 against a pair of Kawanishi H6K Mavis flying boats in Alaskan airspace.  Later variants made their way to both the European and Pacific theaters.  For various reasons, the P-38 was not well suited as a fighter in the European theater.  It was eventually phased out in favor of the P-51 Mustang, but it still served prominently in the photoreconnaissance role.  In the Pacific, the P-38 found its niche and thrived.  Lightnings were credited with destroying more Japanese aircraft than any other USAAF fighter – amounting to approximately 1,800 kills and included the famous shoot-down of Japanese Admiral Yamamoto in 1943.  More than 100 Lightning pilots achieved ace status.  Over 10,000 Lightnings were manufactured across the entire production run, and 2,790 were P-38Js.

The 2,790 J-models were built between 1943 and 1944.  This version overcame the engine cooling issues that limited the performance of earlier Lightnings with the incorporation of enlarged intercooler intakes and radiators.  The intercooler intakes, previously on the wings, were relocated to the lower front of the engine nacelles giving them a “chin.”  The earlier M1 20mm cannon in the nose was updated with the AN/M2-C 20mm cannon.  Other incremental improvements emerged across five production blocks.  The P-38J-5 introduced fuel tanks inside the leading edge of both wings.  A new canopy configuration and the Lynn-3 gun sight were put into production with the P-38J-10.  Block 15 and 20 production added improved radios and turbocharger regulators.  The P-38J-25 was fitted with dive brakes and was the first fighter with hydraulically boosted ailerons.

Strengths:  Tamiya has been at the top of the scale model manufacturing industry for many years now, and with every new release, they seem to define another standard or benchmark in the hobby.  Their first 1:48 scale P-38F/G was a resounding hit (and you can see our review of this kit HERE).

What’s new in this edition of Tamiya’s Lightning?  There are multiple new parts that represent the P-38J.  The most obvious features are the new engine nacelle parts on Sprue N that feature the engine nacelle “chin” intercooler inlets. The enlarged radiator assemblies on the tail booms are also included.  The kit parts are there to build complete ducts that connect the intercoolers to the oil coolers.  New parts for the J-model’s B-33 turbosuperchargers replace the B-13s in the earlier edition of the kit.  The leading edges of the wings (parts M14 and M15) are retooled to depict the refueling caps that accompanied the internal wing tanks.

The cockpit of the P-38J saw a number of changes, and they are beautifully represented here.  A gun-grip type stick replaced the P-38’s earlier-style steering wheel, and it is accurately captured here.  Also included are the Lynn-3 gunsight and the updated radios behind the pilot seat.  The slide-molded canopy parts covers the later canopy style associated with the P-38J-10/15/20/25.  It correctly features a re-contoured windscreen with the flat center section and the two-piece aft canopy.  The nose landing gear strut is also reworked representing the P-38J’s fork configuration, and the main landing gear correctly depicts the reinforced upper struts.  Overall, the P-38J has been expertly captured, with both accuracy and precision.

Beyond these new parts for the P-38J, all the accolades and praises for the earlier P-38F/G apply here as well.  To recap: the quality of molding is both sublime and exquisite.  The recessed panel, rivet, and fastener detail are among Tamiya’s best work.  The parts breakdown is carefully conceived, and it is all to ensure the complex and unconventional airframe comes together seamlessly – literally.  The top of the cockpit pod and upper wings are molded as a single part.  The ceiling of the nose gear well leads into a single internal wing spar extending well into the interior of both wings.  This feature will ensure perfect wing alignment.  Another real tricky spot could be the fit between the booms, tail assembly, and engine nacelles.  Here, the booms and nacelles lock precisely into place such that the horizontal stabilizer will then slide right into position.  The P-38 is a natural tail-sitter, but the three metal ball bearing counterweights to be placed with within precisely positioned cradles buried deep (and are invisible) inside the nose and both engine nacelles remedy this problem.

The cockpit features outstanding detail.  It is perhaps just about on par with what a cast resin set could offer.  The cockpit builds up as a complete unit (firewall, sidewalls) with the control column, throttle quadrant, mixture controls, side consoles, and stick all very well represented.  Instrument dial faces are represented by decals.  The seat and headrest/armor plating assembly also look great, but shoulder harnesses and lap belts are also represented by decals.  A well-sculpted and molded pilot figure is provided.  The parts for the radio stack on the cockpit decking behind the pilot are impressive, and even the small map case is included.  The gunsight assembly also seems just about perfect.  The boarding ladder can be positioned either extended or retracted.  Detail on the nose guns is also quite good.

The gear wells and landing gear are another highlight of the kit.  The wells possess an unusual degree of detail for an injection-molded kit.  They include various large pipes gear door actuators, linkages, and other features.  While the finer wiring and cables are absent, these parts will satisfy most builders in terms of detail.

External stores are provided in the form of two 150-gallon or two 300-gallon external fuel tanks.  If tanks are not fitted, the covers for the stub pylons are included (a thoughtful touch).  While the rudders and ailerons are separate parts, they are designed to go straight-in via mounting tabs.  An even slightly enterprising scale modeler can modify them and make those control surfaces positionable.

The clear parts are absolutely beautiful.  Their optical quality is flawless, and I would be almost afraid to dip them in future or polish them any further.  There is an extended fairing around the windscreen to make painting and masking easier.  Speaking of masking, the kit-supplied masking set is there to assist that task.  Just be aware that it is not a pre-cut masking set.  Cutting the masks out is up the builder.

Tamiya printed the decals in-house and they appear to be technically flawless.  The markings options are interesting.  The choice for the ace of aces, Captain Bong’s airplane, is historically notable.  The red, yellow, and blue striping on the spinners and tail booms of “Putt Putt Maru” provide another really appealing color scheme for the P-38J.

Weaknesses: There only are very few potential shortcomings, some of which boil down to my own personal preferences.  For example, I wish there was something on those instrument panel parts for the detail painter, rather than simple raised instrument dial bezels.  Optional dropped landing flaps would have been a nice touch, too.  I’m also not a huge fan of decal seatbelts or the tail boom’s radiator grills as being represented as decals.  Belts and grills work better as photoetched parts for most builders – but decals are better than nothing.  While the pilot figure is very well made, he is also sitting in a fairly non-dynamic pose, with hands resting on the tops of his legs and looking blankly ahead in what I can only call a “meditative gaze.”  Finally, do keep your eyes out for ejection pin markings.  There are not all that many in this kit, but there are some shallow pin markings on the inside surfaces of the main gear well walls.  They will be hard to see in the completed model, but they will be there, nonetheless.  Of course, while your reviewer might ponder these points, they really do not detract from how thoroughly excellent this kit is.

The Tamiya 1:48 scale P-38J Lightning is yet another instant classic from this manufacturer.  It is expensive, but this is a case were the cost translates into quality.  Maybe do a little shopping around to find sellers who are offering this kit below MSRP.  Those who have built it have universally commented to me on the kit’s outstanding fit and the high level of pure enjoyment.  Here’s hoping that Tamiya might next release a kit of P-38 reconnaissance variants sometime in the future.  Furthermore, if you wish to add even more detail, various aftermarkets detail sets have now been released for this kit by a number of companies.  However you choose build it, it is certain that you will really enjoy this great kit.

Many sincere thanks are owed to Tamiya America and George Canare and Fred Medel for their generosity in sharing this review sample with us.  You can find them on the web at https://www.facebook.com/TamiyaUSA on the web at www.tamiyausa.com.