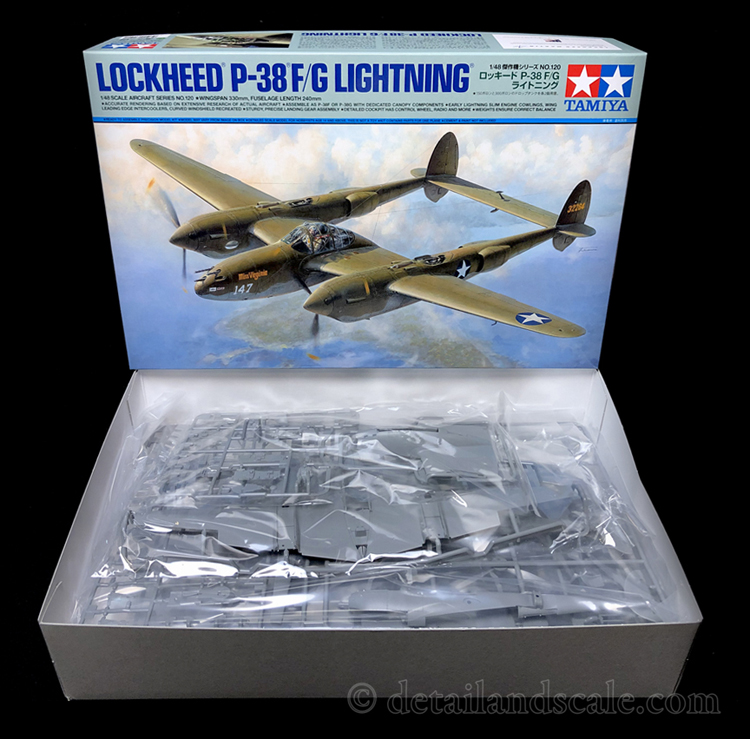 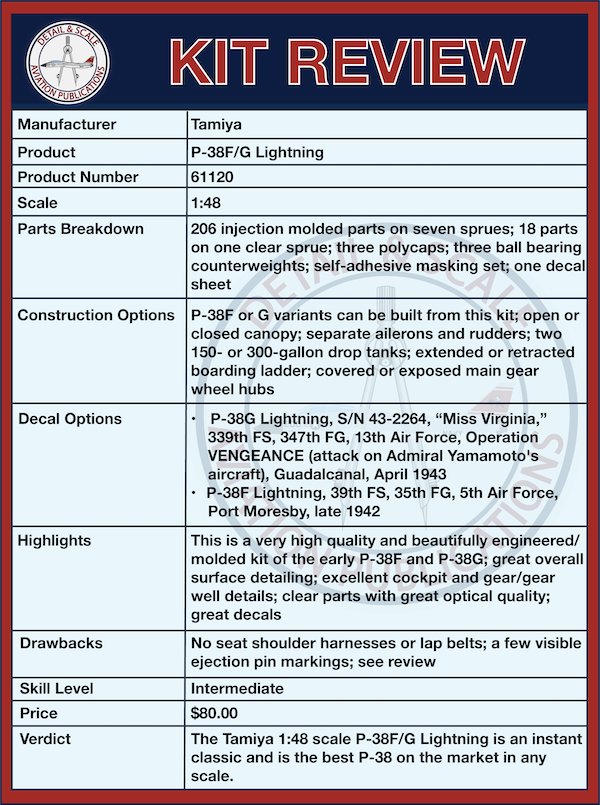 The Lockheed P-38 Lightning was one of the great fighter aircraft of WWII.  It also found renown as a fighter-bomber, night fighter, reconnaissance platform, a long-range escort fighter and a pathfinder for bomber formations.  Many kits of the P-38 have been produced over the years and Monogram’s 1:48 scale P-38 can be enshrined as a true “classic.”  Since the early 1990s, Hasegawa’s family of Lightnings have represented the best P-38s in 1:48 scale.  In August 2019, Tamiya teased the scale modeling world with a limited released of their new-tool P-38F/G Lightning at the IPMS/USA Nationals.  The kit was formally released in October 2019 and it became an instant favorite, including winning the Detail & Scale Reader’s Choice Award for the best kit of 2019.  A review sample reached us recently and we’re excited share our formal review of the kit here.

The Lockheed P-38 emerged from a February 1937 request by the United States Army Air Corps (USAAC) for a twin-engine, high-altitude interceptor.  The Lockheed team, directed by Hall Hibbard and Clarence “Kelly” Johnson, considered a range of twin-engine configurations.  They eventually chose an unconventional and exotic design featuring twin tail booms, tricycle landing gear, a pair of turbo-supercharged 1,000 hp counter-rotating 12-cylinder Allison V-1710 engines, and a central nacelle that housed the cockpit and all the armament.  The first XP-38 first flew in January 1939.  It was the fastest production airplane in the skies at the time, reaching airspeeds in excess of 400 mph.  Among the early prototypes, aerodynamic and structural problems arose involving buffeting and tail flutter, but were eventually sorted out.  Other issues plagued the early P-38 powerplants from basic reliability problems to catastrophic failures.

The first production version was the P-38E, and early Lightnings went into service with the USAAF, RAF, and the Free French air force operating in England.  In the U. S., early Lightnings provided West Coast defense from California to the Aleutians.  There, the P-38 claimed its first air-to-air kills in August 1942 against a pair of Kawanishi H6K Mavis flying boats in Alaskan airspace.  Later variants made their way to both the European and Pacific theaters.  In Europe, P-38s accumulated more than 130,000 sorties and it was clear that the Lightning’s greatest virtues were its long range, heavy payload, high speed, climb rate, and firepower.  Yet, for various reasons, the P-38 was not well suited to the European theater.  It was eventually phased out in favor of the P-51 Mustang but remained prominent in the photo reconnaissance role.  In the Pacific, the P-38 found its niche and thrived.  It was credited with destroying more Japanese aircraft than any other USAAF fighter – approximately 1,800 kills and more than 100 Lightning pilots achieved ace status.  P-38s perhaps most famously were credited with the shootdown of Japanese Admiral Yamamoto in 1943.

Over 10,000 Lightnings were manufactured across the entire production run.  By February 1942, the design had matured significantly into the P-38F.  This early variant spanned 527 airframes, and it was considered to be the first truly combat capable Lightning.  It incorporated a 20 mm cannon and four .50 caliber machine guns in the nose along with hardpoints inboard of the engines for fuel tanks or bombs.  From the P-38F-15 onwards, modifications to the Fowler flaps provided key improvements to combat maneuverability and turning performance.  The P-38Fs also had uprated engines.  Then, in June 1942, the P-38G emerged.  More than 1,000 of these were built.  The -G had even more powerful Allison engines producing 1,400 hp along with better radio gear.

Strengths:  Tamiya has been at the top of their game for many years now, and with every new release, they seem to define another standard or benchmark in the hobby.  In this kit, Tamiya has produced the best P-38 in 1:48 scale, or in any scale, for that matter.  This is better than any Hasegawa, Academy, or Hobby Boss P-38.  Here, comparisons will be naturally made with the Hasegawa Lightnings, which are closest in quality to Tamiya’s P-38.  Hasegawa’s kits were a bit notorious regarding their tricky fits of the nacelles, wings, and tail booms.  Here, Tamiya has figured out the intricacies of P-38 kit design and assembly.  More on this below.

The quality of molding is both sublime and exquisite.  The recessed panel, rivet, and fastener detail is among the best we’ve ever seen from Tamiya.  The parts breakdown is carefully conceived, and it’s all done to make sure the complex and unconventional airframe comes together seamlessly – literally.  The top of the cockpit pod and upper wings are molded as a single part.  The ceiling of the nose gear well extends to a single internal wing spar extending well into the interior of both wings.  This feature will ensure perfect wing alignment.  Another other real complicated spot could be the fit between the booms, tail assembly, and engine nacelles.  Here, the booms and nacelles lock precisely into place and the horizontal stabilizer is then added and will slide right into position.  The P-38 is a tail-sitter, but the three metal ball bearings are intended to be placed with within carefully positioned cradles buried deep (and which are invisible) inside the nose and both engine nacelles.

Tamiya also appears to have nailed the different features of the P-38F and P-38G.  Here, these involve alternate parts for the instrument panels and turbosuperchargers.  The cockpit is really very nice and features awesome detail, just below the level of detail that a cast resin set could offer.  The cockpit builds up as a complete unit (firewall, sidewalls) with the control column, throttle quadrant, mixture controls, side consoles, and the P-38’s uniquely configured control column all being very well represented.  Instrument dial faces are represented by decals.  The seat and headrest/armor plating assembly look great, and shoulder harnesses and lap belts are also represented by decals.  And a well-sculpted and molded pilot figure is provided.  The parts for the SCR-274 radio stack on the cockpit decking behind the pilot are impressive, and even the small map case is included.  The gunsight assembly also seems just about perfect.  The boarding ladder can be positioned either extended or retracted.  Detail on the nose guns are good, too.

The gear wells and landing gear are another highlight of the kit.  The wells possess an unusual degree of detail for an injection-molded kit.  They include various large pipes, gear door actuators, linkages, and other features.  Sure, the finer wiring and cables might be absent, but what’s in the box gets most builders pretty far along in terms of detail.

External stores are provided in the form of two 150-gallon or two 300-gallon external fuel tanks.  If tanks are not fitted, the covers for the stub pylons are included (a nice touch!).  There are also two styles of main wheels: covered or exposed wheel hubs.  Also, while the rudders and ailerons are separate parts, they are designed to go straight-in via mounting tabs.  An even slightly enterprising scale modeler can modify them and make those control surfaces positionable.

The clear parts are absolutely beautiful.  Their optical quality is flawless, and I would be almost afraid to dip them in future or polish them any further.  There is also an extended fairing around the windscreen to make painting and masking easier.  And speaking of masking, the kit-supplied masking set is there to assist that task.

The decals were printed in-house by Tamiya and they appear to be technically flawless.  The markings options are fairly similar in overall look and paint scheme, but the option for “Miss Virginia” is historically quite notable.

Weaknesses:  There are very few potential shortcomings, and some of which boil down to my own personal preferences.  For example, I wish there was something on those instrument panel parts for the detail painter, rather than simple raised instrument dial bezels.  Optional dropped landing flaps would have been a nice touch, too.  I’m also not a huge fan of decal seatbelts or the tail boom’s radiator grills as being represented by decals.  Both work better as photoetched parts for most builders.  While the pilot figure is very well made, he is also fairly undynamic, sitting there with hands on his legs and looking blankly ahead in what I can only call a “meditative gaze.”  Finally, do keep your eyes out for ejection pin markings.  There are not all that many in this kit, but there are some shallow pin markings on the inside surfaces of the main gear well walls.  They will be hard to see in the completed model, but they will be there, nonetheless.  Though do please note: while your reviewer might ponder these points, they really do not detract from how thoroughly excellent this kit is.  I’m rather in love with this thing.

The Tamiya 1:48 scale P-38F/G Lightning is an instant classic.  It is plain to see that it outdoes the fidelity of detail and engineering of any other 1:48 scale P-38 on the market.  I’ve received feedback from some of those who have built it, and they universally comment on the kit’s outstanding fit and the high level of pure enjoyment the build brings.  While I try not to “read the sprues” too much, parts breakdown here does plainly reveal that Tamiya has planned for additional releases.  We have high anticipation for what those may be, such as later model P-38s or reconnaissance variants.  Furthermore, if you wish to add even more detail, Eduard has now released a series of detail sets and we will bring you reviews of those detail sets shortly.  In the meantime, enjoy this great kit.

Sincere thanks are owed to Tamiya America and George Canare for their generosity in sharing this review sample with us.  You can find them on the web at https://www.facebook.com/TamiyaUSA on the web at www.tamiyausa.com.