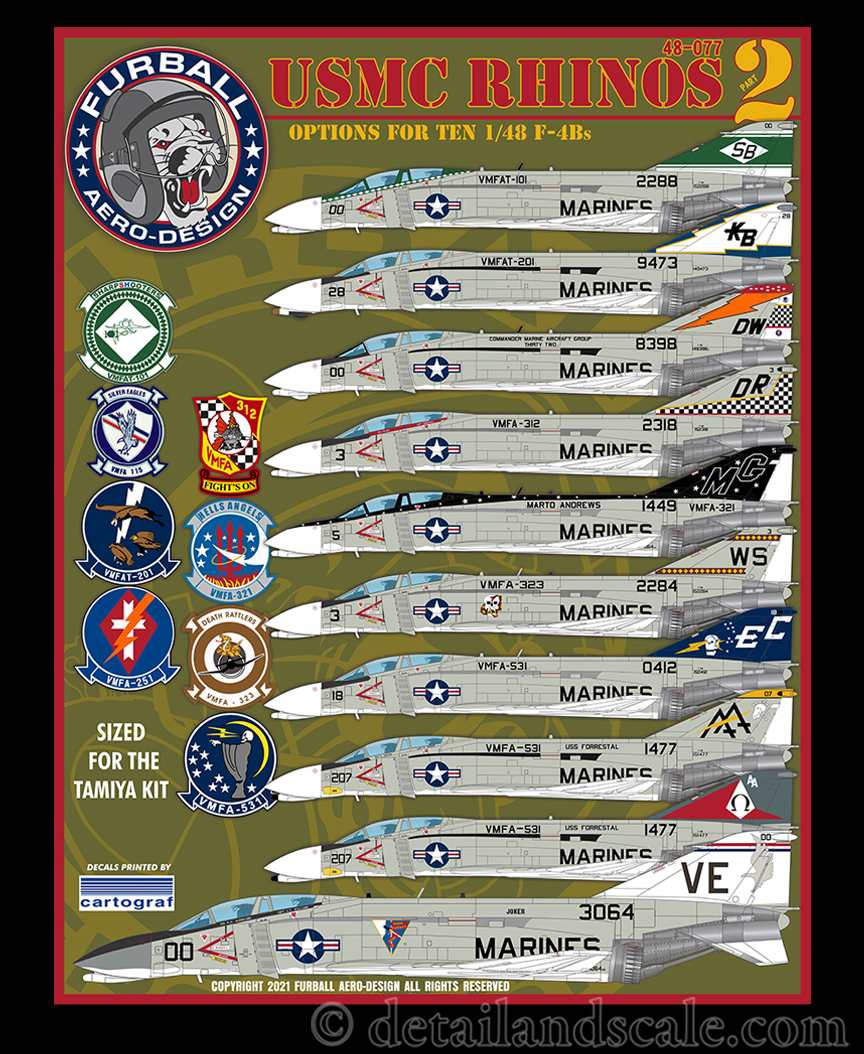 Furball Aero-Design has developed an indisputable reputation involving their elite-level of research, artwork, and printing.  As is to be expected, these decals are “standard Furball” and are among the highest quality decals available.  The markings are carefully sized to precisely fit on the Tamiya kit, but some of these could conceivably be adapted with some effort to fit on the Academy, Esci, or Hasegawa kits, if one so desired.

The quality of both the decal design/artwork by Furball and the printing by Cartograf is equally superlative.  The high standard of research also shines through on the accuracy of these decals.  The assortment of schemes is both diverse and notably unique.  As a big fan of both USMC Phantom schemes and the Tamiya F-4B, your reviewer is delighted with this decal set.  The markings options are all very inviting and represent “classic” USMC F-4B schemes for a lot of scale modelers.  Perennial favorites on this sheet include a VMFAT-101 “Sharpshooters” jet with white-over-green diamond tail markings, the VMFA-251 “Thunderbolts” with orange thunderbolt and black-and-white checkerboard tail, and the VMFA-312 “Checkerboards” even more conspicuous checkerboard tail art.  To you reviewer, any F-4 wearing the colors of VMFA-115 “Silver Eagles” looks dazzling, and this 1974 scheme is no exception.  Another absolute classic is the VMFA-321 “Hell’s Angels” scheme with the star-spangled gloss black tail, spine, and forward upper fuselage as worn by the jets stationed at Andrews AFB.  The “Death Rattlers” of VMFA-323 and the “Hawks” of VMFAT-201 also make an appearance on the sheet.

Three remaining schemes cover two aircraft and three paint schemes from the “Grey Ghosts” of VMFA-531 between 1969-1973.  Their skull art on the vertical stabilizer is rather iconic, but perhaps is overshadowed by the VMFA-531 F-4B that got “zapped” by the Royal Navy.  In 1973, this USS FORRESTAL-based squadron was conducting training with U.K. forces, cross-decking aboard HMS ARK ROYAL.  BuNo. 151477 broke and was temporarily stuck aboard the British carrier.  Its vertical stabilizer was repainted in the colors of the Royal Navy’s 892 Squadron while it awaited repair.  Such mischief can happen when a visiting airplane stays aboard someone else’s carrier for too long… and it resulted in one of the most recognizable USMC F-4B paint schemes of all time.

In conclusion, Furball Aero-Design has done another great job assembling an impressive ensemble of USMC F-4B schemes for the Tamiya kit that a lot of scale modelers will really enjoy.