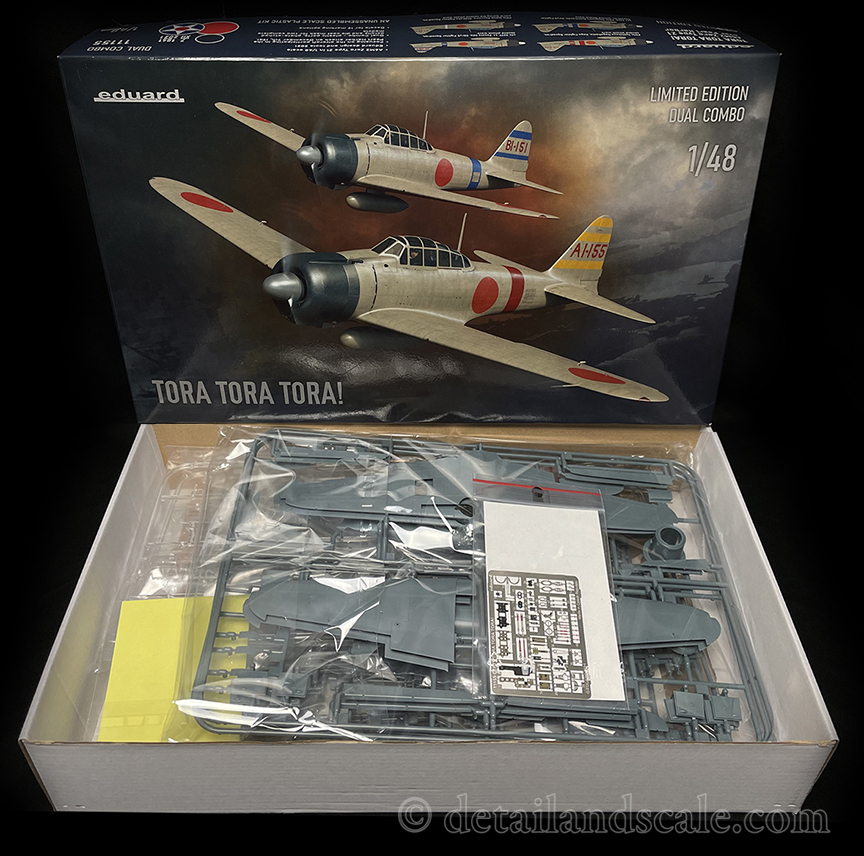 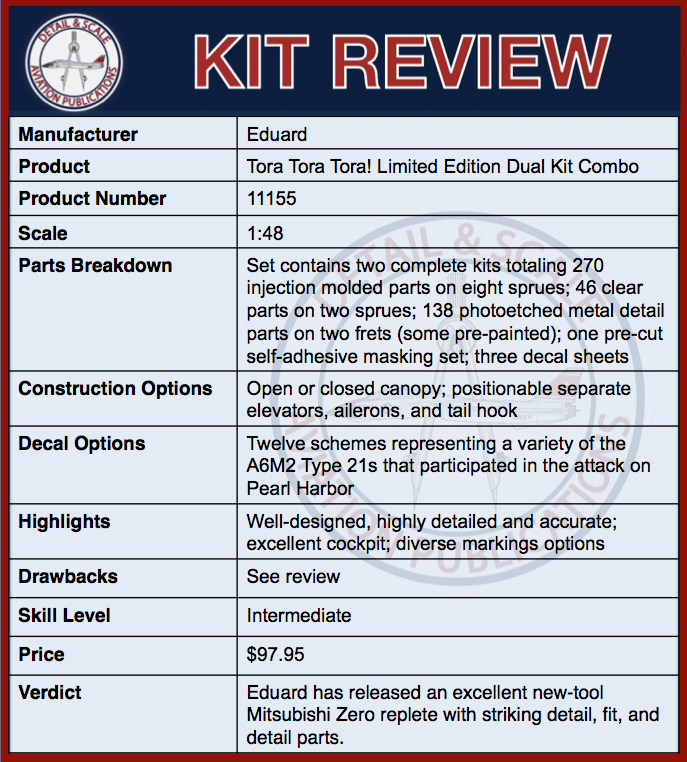 Few aircraft have achieved either the renown or infamy as the A6M Zero.  It was the premier Japanese naval fighter of the Second World War and is forever associated with the attack on Pearl Harbor.  In late 2021 (and to commemorate the 80thanniversary of the Pearl Harbor raid), Eduard launched their brand-new family of 1:48 scale Zero kits with the limited edition dual kit boxing Tora Tora Tora!  Let’s sit down with Eduard’s newest release.

The origins of the A6M date back to late 1937 when the Imperial Japanese Navy issued a request for a highly ambitious, high-performance carrier-based fighter.  Mitsubishi Heavy Industries responded with low-wing cantilevered monoplane built from the lightest aluminum alloys.  Powered by a Sakae engine, it was armed with two 7.7mm machine guns in the engine cowl and a 20mm cannon in each wing.  The first Zero flew in April, 1939.  It was called the Type 0 carrier fighter, taken from the last digit of the Imperial year 2600 when it entered service, but its official designation was “A6M.”  The formal Allied code name was “Zeke.”  The Zero’s production run lasted until 1945, with 10,939 Zeros built across nine major variants.

The Zero was the lightest, most maneuverable, and longest-range single-engine fighter of the war.  The first Zeros went into combat against Nationalist Chinese I-15s and I-16s in 1940.  Against these two aircraft, the A6Ms were virtually untouchable and boasted a 12:1 kill ratio.  This gave the IJN such confidence that the Zero’s perceived superiority was instrumental in building Japan’s justification for the attack on Pearl Harbor.  On that day of infamy, Zeros indeed wreaked havoc and death.  Its maneuverability, climb rate, and armament was unlike anything the Allies faced in the European Theater.  Practically overnight, the West changed its view of the Zero from that of an inferior knock-off of Allied technology to an exotic “mystery ship.”  As no one could out-turn an A6M, new tactics were developed, such as “hit and run” slashing gun attacks and the famous “Thach Weave.”  Between 1943 and 1944, the F6F Hellcat, P-38 Lightning, and F4U Corsair became operational and all outclassed the Zero in terms of armor, armament, and speed.  Regardless, proficient airmanship still made the Zero a deadly opponent, but the numbers of experienced Japanese aviators dwindled.  Production likewise could not keep pace with unrelenting combat losses.  By the end of the war, the A6M had established its place in history, but was simultaneously vanquished and obsolete.

Eduard’s 1:48 scale limited edition dual kit set Tora Tora Tora! contains TWO complete A6M2 Type 21 kits.  Each kit consists of 135 injection molded parts on four blue-grey sprues (about 31 parts go unused in this version of the kit), and 23 clear parts on one clear sprue (ten of which are not used in this version of the kit).  Two sets of photoetched metal parts (some pre-painted) each contain 69 parts.  There is also a pre-cut self-adhesive masking set used for the windscreen, canopy, and wheel hubs.  The full-color instruction booklet organizes the build over 18 pages.  The instruction booklet also features a detailed and very well illustrated narrative about the Zero’s participation in the attack on Pearl Harbor written by Jan Bobek.  Decals come on one primary sheet with all the primary aircraft markings, and two individual airframe stencil sets provide markings options for the following one dozen aircraft:

Strengths:  There have been many injection-molded kits of the Zero over the years in 1:48 scale, and many have been quite good.  Going back to 1970, the Otaki A6M kits are still relatively respectable. Tamiya’s 1:48 scale Zeros ruled the roost in the 1980s.  By the mid-1990s, new-tool A6Ms by Hasegawa became the best 1:48 scale A6Ms but were outshined by Tamiya’s newest Zeros beginning in 2008.  Here, the new Zeros by Eduard, however, might surpass some elements of these earlier kits.

Eduard’s new 1:48 scale Zero is a very well-designed, precisely fitting kit with an overall excellent level of detail.  It is consistent with their many excellent releases over the last few years, such as their Spitfires, Mustangs, and Würgers.  Exterior surface details are just sublime, from the perfectly recessed panel lines to the thousands of rivets and fasteners that no other A6M kit captures in this way.  Raised surface features are represented where they should be, such as on the drop tank.  Many other small details, from the radio mast to the direction-finding antenna, mass balancers on the wings, and the 20mm cannon ports are well represented.  I test fit the fuselage and the wings and encountered an excellent fit.

The kit has a few construction options, including a positionable canopy, rudder, and tailhook, along with separate ailerons and elevators (positionable with a little work).  An optional centerline drop tank is included.  The main gear wells build up out of several parts and are well detailed, missing only the plumbing details that were pretty minimal in the actual airplane.  The landing gear and wheels share a crisp level of relief.  The twin rows of the Sakae engine are very nicely done.  One unique feature of this kit involves building the engine cowling out of six pieces around a kind of hollow construction jig that provides a precise fit and geometry.  The jig also doubles as the seamless inside surface of the engine cowling that mounts around the engine.  Indeed, it is the little things…

The kit cockpit, on its own, is quite excellent.  Under most circumstances, I personally gravitate towards some form of cockpit detail set, but here I might just build it right out of the box.  The injection-molded cockpit parts are quite good in terms of their complexity, fidelity, and detail.  Still, this issue of the kit does include photoetched metal parts of the instrument panel, side consoles and sidewalls, seat harnesses, the throttles, and multiple handles, switches, and assorted details.  That is to say that the photoetched metal parts in the box only further elevate the detail and accuracy of the cockpit.  However, if you are not a fan of PE parts, alternate instrument panel dial faces are provided as decals.  The clear parts for the windscreen and canopy are optically flawless and crystal clear.

The decals appear to be water-slide decals, unlike Eduard’s newer wet-transfer style that we have been getting used to over the last year and a half.  The decals appear to have been printed in-house by Eduard.  They look great, with excellent color, resolution, and they have a thin restrained carrier film.  All these A6M2 Type 21 Pearl Harbor raiders wore overall gray-green schemes, but among them are multiple distinctive variations on that theme (e.g., white, red, and blue fuselage stripes and yellow tail stripes indicating various commanders) among other unique markings.  The one dozen aircraft included here do represent a very good cross section of the markings seen among the Pearl Harbor attackers.  Note that the particular shade of gray-green is one that is not necessarily commercially available and is suggested as a 70:30 mix between Gunze or Mission Models gray green and gray.  Detail & Scale’s book, Attack on Pearl Harbor, Japan Awakens A Sleeping Giant, contains color profiles and information on the markings used on thirteen different Zeros used in the attack, and it explains the markings used on them by the three carrier divisions and by various group, division, and section leaders in the attack.  The smaller decal sheets contain complete maintenance stencils for both kits.  Likewise, the pre-cut self-adhesive masking set is another highlight here.  Especially for a multi-frame windscreen and canopy, as found on the A6M, Eduard’s masks will be your best friend while painting to produce, sharp and clearly delineated frames on those gorgeous clear parts.

Weaknesses:  No substantive critiques of this kit set are immediately apparent.  Unlike the latest generation Tamiya Zero, the Eduard Zero has the landing flaps molded shut. It would have been a nice construction option to have out of the box.  Use of an Eduard detail set (#481076) is required to represent this feature.

Eduard’s 1:48 scale new-tool A6M Zero is very impressive and receives overall very high marks.  The level of detail is excellent, and the kit design and relatively low parts count mean that it should be a rather quick build.  Furthermore, Tora Tora Tora!, as the inaugural release of Eduard’s Zero, is impressive thanks to two kits in the box, all the markings options, detail parts, and masking set.  With an MSRP just shy of $100.00, this set does include the equivalent of two complete ProfiPACK kits, so the consumer is actually paying a little bit less and saving some money.  If you only want or need one, a single kit of the A6M2 Type 21 has now been released, with plans for A6M2-N, -K, Model 11, 22, 52, and 63 Zeros coming throughout 2022 and 2023.  For those interested in adding even more detail, Eduard also offers a range of additional detail sets for their new Zero.  Keep an eye out for those reviews, coming soon, right here at detailandscale.com.