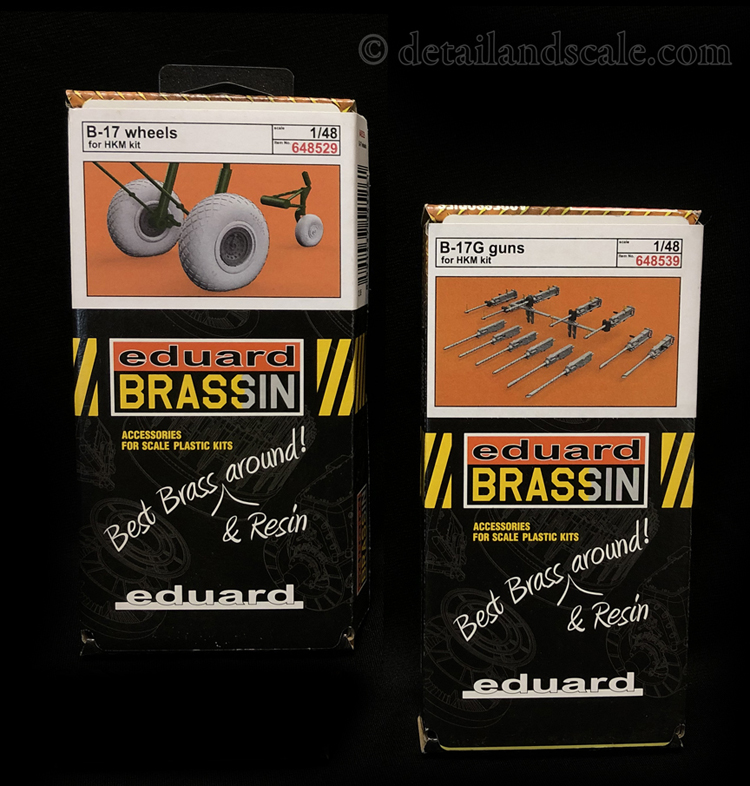 In 2019, the first new-tool 1:48 B-17G Flying Fortress kit in over 40 years was released by HK Models.  While it is not perfect, it indeed outshines the classic Monogram and Revell Flying Fortress kits in some key ways (and you can read our detailed review of the 1:48 scale HK Models B-17G HERE.)  Eduard developed and released a range of detail sets to bring an exceptional level of detail to the HK B-17G.  We divided these 14 different photoetched metal and cast resin detail sets into five separate installments, and here in Part 5, we take a look at two Brassin sets for this kit.

Eduard Brassin # 648529  B-17G Wheels (MSRP: $12.95): this offering contains seven cast resin parts and a pre-cut self-adhesive masking set.  The resin parts cover the two single-piece main wheels, a single-piece tail wheel, and separate inner and outer main wheel hubs.  The casting here is typical Eduard: high-detail, high-fidelity, and flawless quality from a manufacturing perspective.  Highlights include the diamond tread on the main wheel tires, the Goodyear imprimatur and other tire sidewall data as raised details, and very intricate wheel hub details.  The bottoms of the all the tires are slightly flattened and ever so slightly bulged, which is accurate for the weight of a B-17G sitting on its wheels.  The wheel hub masks are greatly appreciated, as they save time and make for a very accurate exercise in masking what otherwise would be a very challenging tight compound curve.

Eduard Brassin # 648539 B-17G Guns (MSRP: $24.95):  The extensive defensive armament of the B-17 led to its name. The day before the prototype Model 299 flew for the first time, a reporter for The Seattle Times remarked that the multiple machine guns arrayed around the aircraft was reminiscent of a “15-ton flying fortress.” Boeing quickly trademarked the name.  This set contains 13 cast resin versions of the Browning .50-caliber M2 machine guns for the B-17G. This set contains 39 cast resin parts and 16 photoetched metal detail parts on one fret.  Everything is here: the chin turret, the navigator and bombardier’s guns, the top turret armament, the radio operator’s gun, the ball turret guns, the waist guns, and the tail guns.  The detail is excellent from the gun bodies to the perforated barrel cooling jackets.  Other items include the cocking bolts, pivot mounts, aiming reticles, and sights.  After reviewing the original M2 manual, it seems that there is really nothing that Eduard missed.  The set has the multiple variations of barrel tips and the early-style waist gun mounts appropriate for this kit (and not the K6 gun mounts of the later B-17G Block 40/50s).  One potential error is that the instructions describe the tail guns as being for the Cheyanne tail turret which was not fitted to the early B-17G configuration supplied in this kit.  That said, these tail gun parts should work just fine with the early-style tail turret in the HK Models kit.  Another glitch is that a few of my barrels were a bit warped. This can happen with such thin resin parts. A little hot water will likely be all that is needed to bend them back into position.

In summary, Eduard provides another two very nicely executed Brassin detail sets that go way beyond the detail in the 1:48 scale HK Models B-17G.  I will be using both of these sets in my upcoming build of this kit.