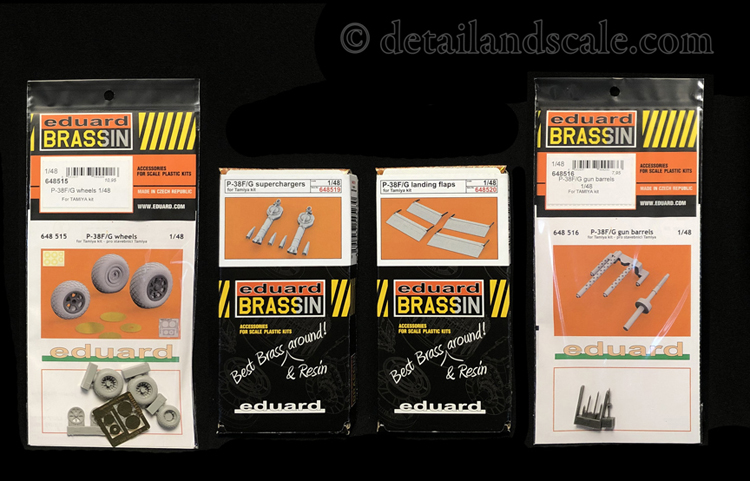 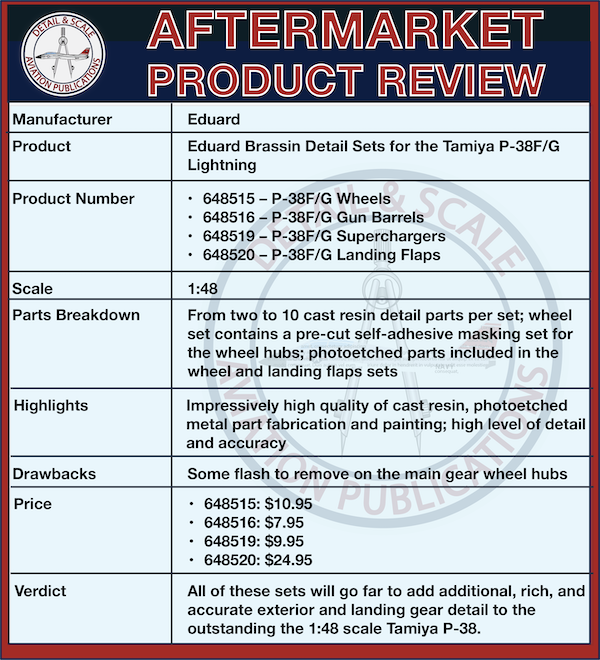 In October 2019, Tamiya released their outstanding 1:48 scale P-38F/G Lightning kit.  It won the Detail & Scale Reader’s Choice 2019 Kit of the Year Award (and see our review HERE).  Not long after, Eduard started to release a range of detail sets for the Tamiya Lightning.  Here, we take a look at four of the sets that they’ve produced for this kit in the Brassin line.

648515 – P-38F/G Wheels:  the kit wheels are nice, but these resin replacements are exceptional.  You get the main nose wheel, both main gear wheels, the outboard hub, and optional photoetched metal hub covers.  The oval tread on the nose wheel tire and diamond tread on the main wheel tires are gorgeous.  There’s also a slight bit of flattening on the tire surfaces which sit on the ground, and the effect looks just great.  It’s not overdone. Eduard has also included a small masking set to paint the hubs.  I’m a big fan of these time-saving masks which produce great results, too.  Just note that there’s some casting flash that needs to be removed between the main gear wheel bug spokes.

648516 – P-38F/G Gun Barrels:  gun barrels in the kit are a weak point – a bit simplified and are decent for injection-molded parts, but this replacement set consisting of two cast resin parts (the .50-caliber gun assembly and 20mm cannon) is far superior.  The real takeaway here is the quality of the recessed perforations of the gun barrel cooling jackets.  This one detail is quite valuable to achieve a realistic looking set of gun barrels extending out of your Lightning’s quite prominent nose.

648519 – P-38F/G Superchargers:  the Lightning had a pair of superchargers that forced extra compressed air into the Allison V-1710’s combustion chamber to produce its impressive power output and performance especially at higher altitude.  Again, the kit parts are nice, but Eduard’s six-piece resin set possesses another level of detail.  These are exquisite castings, and they are virtually drop-in replacements for the kit parts.  Also included here are the four small air scoops (two per supercharger) and they look great.  These scoops are appropriately deep.

648520 – P-38F/G Landing Flaps:  One of the only things you can criticize about the Tamiya P-38 is the lack of positionable control surfaces.  This set provides the landing flaps.  It is the most complex and involved of the four Brassin products reviewed here.  It involves a fair amount of surgery to the kit’s wings, but it is not at all daunting.  There are 12 cast resin parts (eight flap hinge actuators, two inboard single-piece flaps, and two outboard single-piece flaps) and two identical frets containing 18 photoetched parts each.  The PE parts provide the internal upper wing surfaces and look great.  The detail on the cast resin parts is excellent as well.

Overall, each of these Brassin sets individually brings something very nice to the Tamiya P-38F/G.  Used together, they are a seriously impressive combination.  I plan on using them all for my future Tamiya Lightning build.

We extend our sincere thanks to Eduard for the review sample. You can visit them on the web at http://www.eduard.com  and on Facebook at https://www.facebook.com/EduardCompany/