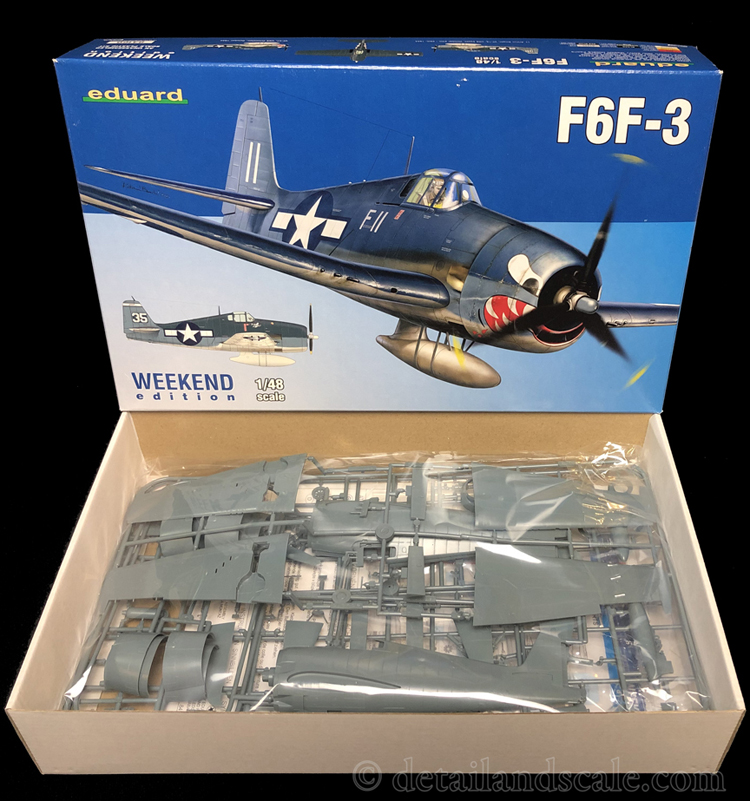 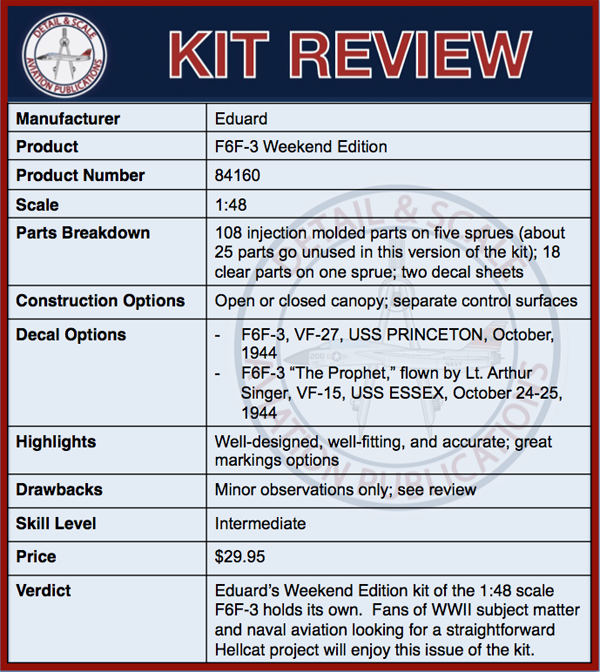 The Grumman F6F Hellcat achieved a singular impact in World War II.  Operating from U. S. Navy carrier decks, the Hellcat played a crucial role in turning the tide of the Pacific war.  The Hellcat was the subject of a recent Detail & Scale publication (which you can find HERE http://www.detailandscale.com/F6F_Hellcat_in_Detail_and_Scale_Book.html). There have been many kits of the Hellcat over the years and Eduard 1:48 scale kits are among the best.  In late 2020, they reissued their 1:48 F6F-3 as Weekend Edition kit.  Let’s sit down with this kit and see what we’ve got.

Even before Pearl Harbor, it was clear that the Mitsubishi A6M Zero outclassed the Grumman F4F Wildcat, which was the U.S. Navy’s primary carrier-based fighter of the time.  Work on the Wildcat’s successor began in 1938.  By June 1941, the contract for the first Grumman F6F was signed.  The Wildcat’s “Big Brother” certainly resembled the F4F, but was in reality a totally new airplane.  Following its flight test program, the F6F made its combat debut in September 1943.  The F6F quickly gained a reputation as stable gun platform, rugged, survivable, easy to fly, and easy to maintain.  Perhaps most importantly, it was superior to the Japanese Zero.  As a testament to Grumman and their workforce, a total of 12,275 Hellcats were built in just over two years.  F6Fs were operated in considerable numbers by the U.S. Navy, U.S. Marine Corps, and Great Britain’s Fleet Air Arm.

Hellcats were powered by a 2,000 hp Pratt & Whitney R2800 Double Wasp engine as used in the F4U Corsair and P-47 Thunderbolt fighters.  While optimized for air combat, it was also a versatile multirole fighter.  Hellcats were armed with six .50 cal. M2/AN Browning air-cooled machine guns with 400 rounds per gun.  A centerline hardpoint under the fuselage could carry a 150-gallon drop tank or a bomb.  Later Hellcats also had wing bomb racks allowing the airplane to carry up to 2,000 pounds of air-to-ground ordnance that could also include six HVAR rockets.

The Hellcat was a deadly opponent.  Over the course of the Pacific campaign, Hellcats were credited with destroying a total of 5,223 enemy aircraft with only 270 combat losses (a 19:1 kill ratio).  There were 305 Hellcat aces, and at the top was Captain David McCampbell who scored all his 34 victories in the Hellcat.  Following the Japanese surrender, Hellcats rather rapidly found themselves turned into trainers or target drones as the Grumman F8F Bearcat came on the scene, but some F6Fs remained in front-line service until 1954 still serving admirably in the night fighter role.

Strengths:  In our recent book on the Hellcat published in 2020, Detail & Scale conducted a through examination of the Eduard Hellcat kits, along with all the other contemporary F6F kits in all the major scales. To recap, and to give this kit its due in this review:

Eduard’s 1:48 scale F6Fs are based on their original 2008 tooling.  It might not be as stunning in terms of recessed surface detail as Eduard’s more recent Mustang, Tempest, or Spitfire kits, but it is still quite impressive by any standards.  The kit itself is fairly simple.  It’s not over-engineered or overly complex, so there’s a lot here for both a beginner and an expert modeler.

It is generally quite accurate. A small sprue J (attached to a second set of fuselage halves not used here for this Hellcat variant) contains the correct engine cowling for the F6F-3. One feature I really like is the slightly raised, overlapping trailing edges of the panel lines on the fuselage.  This was a feature on the 1:1 scale Hellcat, and here, Eduard did a nice job simulating that feature.  You can kind of see it, but you can definitely feel it when you run your finger over the parts. Separate flaps, ailerons, elevators, and rudders are also featured.  However, when the power was off, do note that these features were spring loaded, so unless something broke, the F6F’s control surfaces returned to the neutral position.

The kit cockpit, on its own, is somewhat basic and simplified in several respects.  It is really intended to be gussied up with the photoetched metal detail parts made by Eduard (and available separately if one wishes to use them with the Weekend Edition kit). Still, if a quick build is the aim, decal versions of the instrument panel, side console details, and seatbelts are provided. The engine is also relatively good as an injection-molded item.

Eduard Weekend Edition kits contain only two markings options.  Of all the attractive or historic Hellcat schemes to choose from, the most iconic might be markings option A: the shark mouth and eyes applied to the airplanes of VF-27 in 1944 before their carrier, the USS PRINCETON, was lost.  VF-15’s “The Prophet” is also quite distinctive.  The both the primary decal sheet and the airframe stencil decal sheet was printed in-house by Eduard, and they look great.  I can see no technical errors in printing.

Weaknesses:  The main gear wells ae a bit shallow, and the gear wells and the gear themselves are “soft” in overall detail, but Kazan Model Dynamics has a great detail set to attend to this. The shallow gear wells means the gear extend out too far, and that makes the finished model sit a little high. Note also that there are no alignment aids for the fuselage halves.

Eduard’s Weekend Edition kit of the 1:48 scale F6F-3 continues to stand up well.  Fans of WWII subject matter and naval aviation looking for a straightforward Hellcat project will certainly enjoy this issue of the kit.