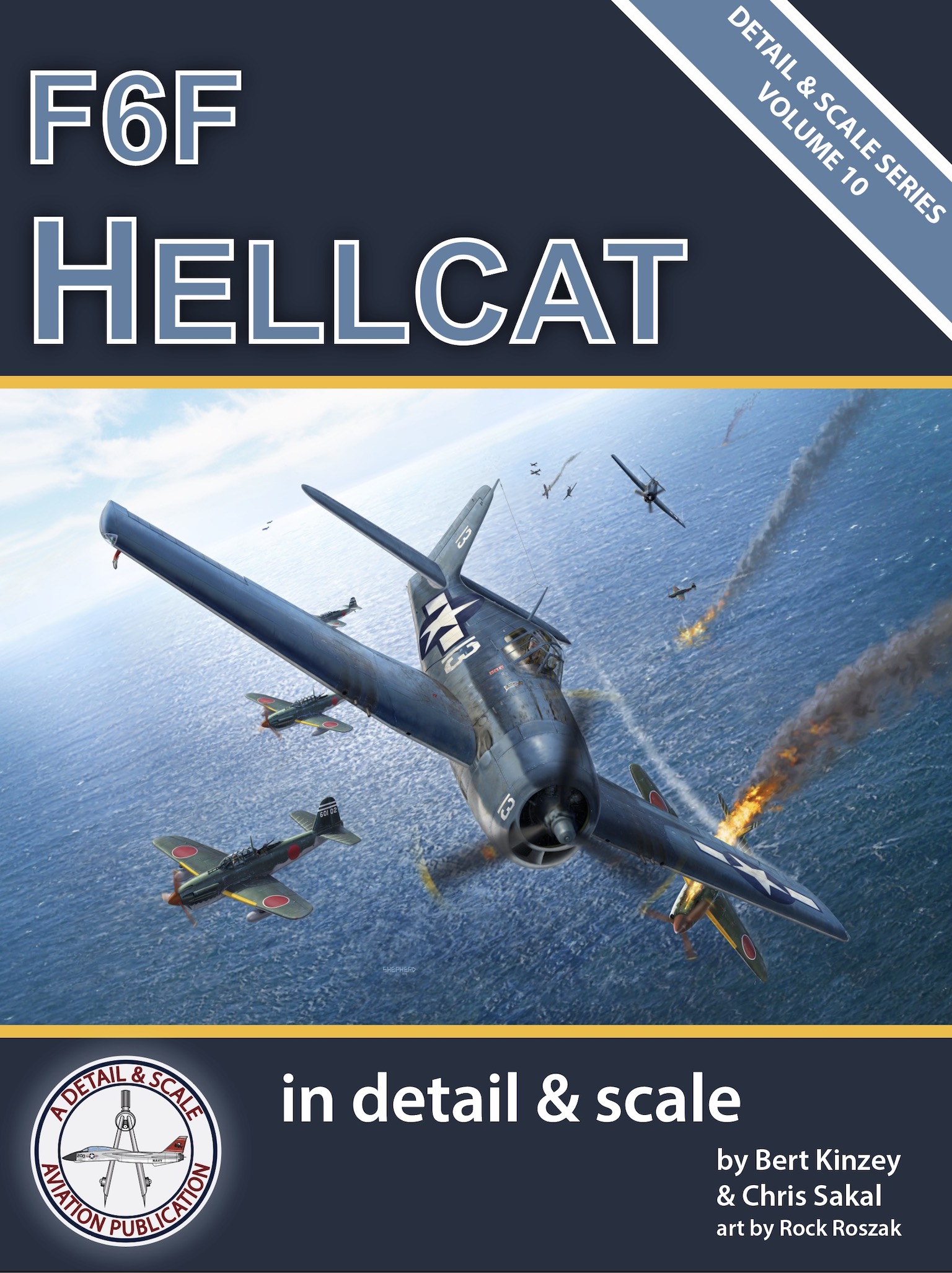 F6F Hellcat in Detail & Scale is the tenth volume of the expanded Detail & Scale Series of military aviation and modeling books.  The Grumman Hellcat is one of the most famous fighters in the history of military aviation.  This new book covers every aspect of this significant aircraft, from its developmental history through its use as the first type flown by the iconic U. S. Navy aerial demonstration team, the Blue Angels.  Hellcats utilized as drones and drone controllers are covered, as is its service with foreign nations.

Detail & Scale previously published volumes on the Hellcat in 1987 and 1996.  The original work in 1987 was improved nine years later with greater coverage of aircraft details than was previously possible.  Now, in this expanded volume, even more detailed coverage is provided.

F6F Hellcat in Detail & Scale is a detailed study of one of the most successful fighter aircraft designs to see combat during the Second World War.  Historical text has been written for each variant of the Hellcat.  The Hellcat Details chapter has been greatly expanded using new color photos almost exclusively.  Additionally, many new vintage color and black and white photos have been added to better tell the Hellcat’s story.  But one feature, the fascinating and informative interview with Captain David McCampbell, remains in this new edition.  Finally, the Modelers Section has been updated to include reviews of all of the kits that are available as of this writing (March 2020).

The book begins with a comprehensive developmental and operational history of the Hellcat and follows that with an all-inclusive chapter on the various Hellcat variants.  Every variant of the Hellcat is covered, including the XF6F-1/-2/-4/-6 prototypes and the F6F-3/-3E/-3N and F6F-5/-5E/-5N operational variants.  These are followed up with sections on the use of the Hellcat as the aircraft of choice used in the very first and early exhibitions put on by what would become the U. S. Navy Blue Angels precision flight demonstration team.  The use of the Hellcat in the drone and drone controller roles, both in combat and in peace time is covered next, as is a survey of its use in foreign service by the United Kingdom, France, and Uruguay.  Next, is a reprise of a favorite element of the earlier versions of this book, the interview with David McCampbell, the Navy’s all-time leading ace, where he discussed the Hellcat, his own experiences, and the markings of his personal aircraft.

A comprehensive chapter on Hellcat details, long the hallmark of the Detail & Scale brand, follows.  This chapter contains eight sections covering the cockpit, windscreen and canopy, fuselage, wing, landing gear, tail, engine, and armament and external stores details.  Complete coverage of almost every square inch of the Hellcat is provided through 129 high resolution photographs, 119 of which are in full color.

The comprehensive details chapter is followed by a colorful look at the paint schemes and markings used by the Hellcat during its operation life.  The well known wartime paint schemes are all covered, as are the colorful post-war utility schemes seen on Hellcat drones and drone controllers.

As with all Detail & Scale Series books, the final chapter covers the scale modeling history of the Hellcat, from the early kits that are now only collector’s items, to the wide range of kits that have been available for half a century, including the recent Airfix 1/24th kit, which is the most detailed and accurate Hellcat ever released.  The most popular scales of 1/144th, 1/ 72nd, 1/48th, 1/32nd, and 1/24th are treated as separate sections, and the available models in each are reviewed.

F6F Hellcat in Detail & Scale is the most comprehensive book on the Grumman Hellcat ever produced. 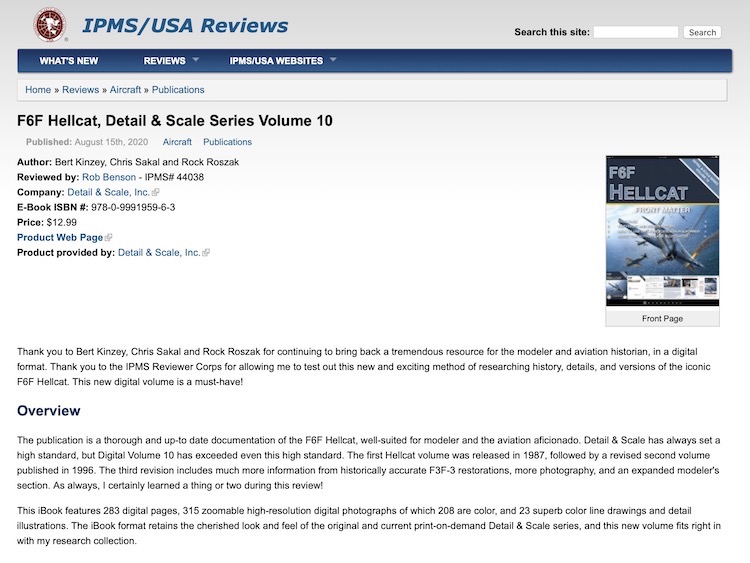 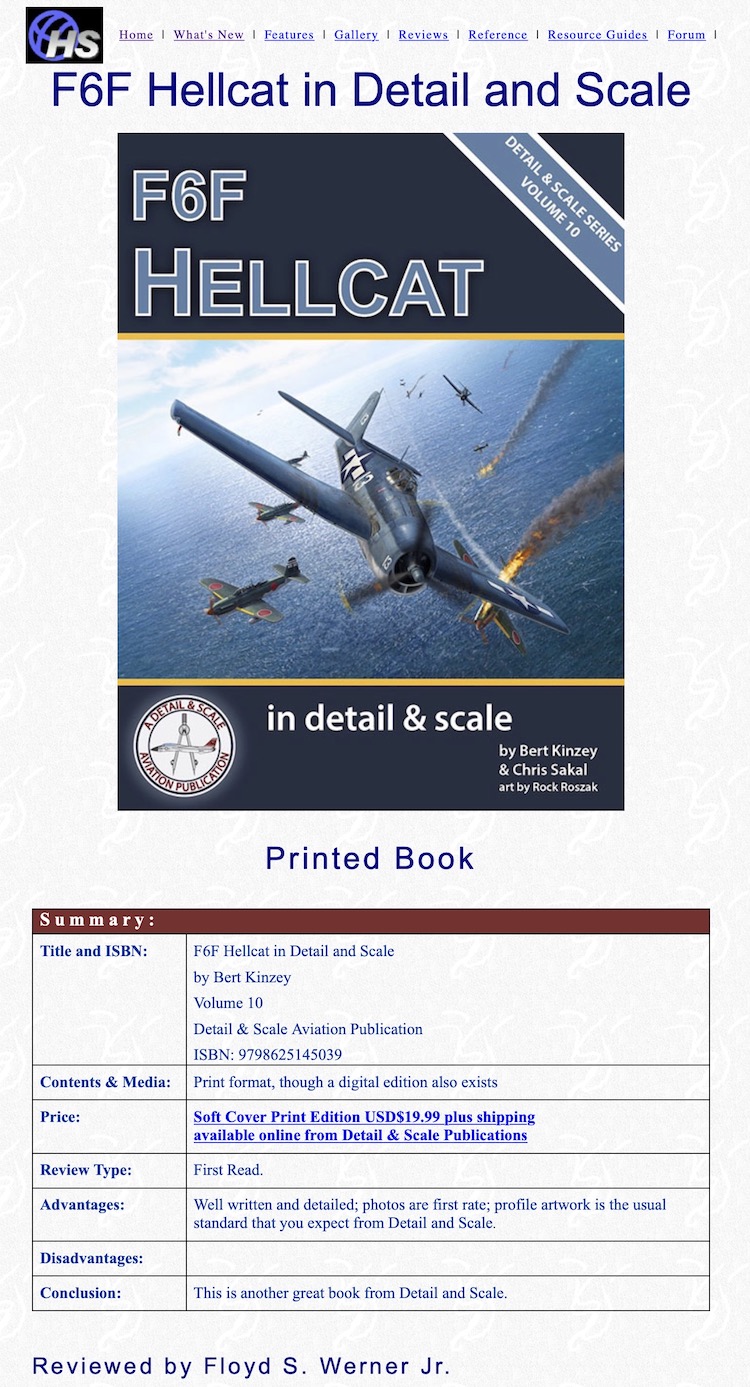