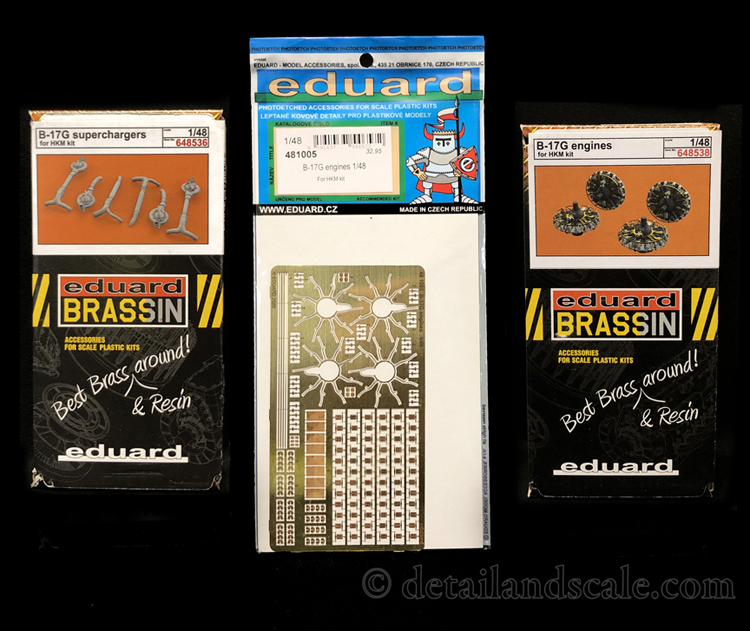 In 2019, the first new-tool 1:48 B-17G Flying Fortress kit in over 40 years was released by HK Models.  While it is not flawless, it indeed outshines the classic Monogram and Revell Flying Fortress kits in some important ways (and you can read our detailed review of the HK Models 1:48 scale B-17G HERE.)  Eduard developed and released more than one dozen detail sets to bring a really exceptional level of detail to the HK Models B-17G, and we have divided our reviews of these sets into five separate installments.  Part 4 takes a look at three sets designed to enhance the kit’s four Wright R-1820 Cyclone engines.

Eduard # 481005 B-17G Engines (MSRP: $32.95):  This is a purely photoetched metal detail set designed to enhance the kit-supplied engine faces.  It contains one fret that holds 164 parts (which breaks down to 41 parts per engine).  The most prominent items here are the engine ignition harnesses, front spark plug lead wires, and rear spark plug lead wires.  Other items provide detail for the interior surfaces of each of the cowl flaps and the engine mounting ring and the attachment brackets on the front of each cylinder head.

Eduard Brassin # 648538 B-17G Engines (MSRP: $54.95):  The previously described detail set is to dress up and enhance the kit-supplied engines.  If that’s not enough for a scale modeler, this multimedia Brassin set represents one further step up in the form of a complete replacement for the kit engine parts.  It contains 92 cast resin parts, 35 photoetched metal parts on one fret, and a small decal sheet.  The cast resin parts include the Wright R-1820 engines, each one cast as single part, front and back.  Crankcase covers are separate items, ancillary gear (e.g., the engine oil sump and pump, propeller governor), and each one of the engine pushrods are separate parts (72 in total, and with a few spares in there if you need them).  In my sample, a few of the pushrods had broken off their delicate casting block connections but were otherwise in perfect shape.  Overall, the casting of the resin parts is flawless, and the engine detail is solid.  The PE parts cover mostly the engine ignition harnesses and spark plug leads with some other small items such as oil lines and the propeller governor drive belt are included as well.  The decals provide engine block data and other placard markings.

Eduard Brassin # 648536 B-17G Superchargers (MSRP: $12.95):  The conspicuous engine superchargers are provided in this Brassin set, consisting of a total of six cast resin parts.  The differing configurations for the inboard and outboard engines are perfectly captured here, and the cast resin detail is exceptional, especially on the turbine assemblies.  They are just perfect.  These supercharger parts also just about drop into the kit, with only a tiny bit of modification needed to fit the turbine sections of the Number 2 and 3 (inboard) engines.

In conclusion, Eduard provides some really impressive detail parts here for the HK B-17G in 1:48 scale.  Whether one wishes to gussie-up the kit’s engines or exchange them for cast resin and metal aftermarket replacements, the first two sets have you covered for whichever option the builder wishes to pursue.  Beyond that, the supercharger set is a highly recommended as a beautifully detailed replacement for the kit parts.