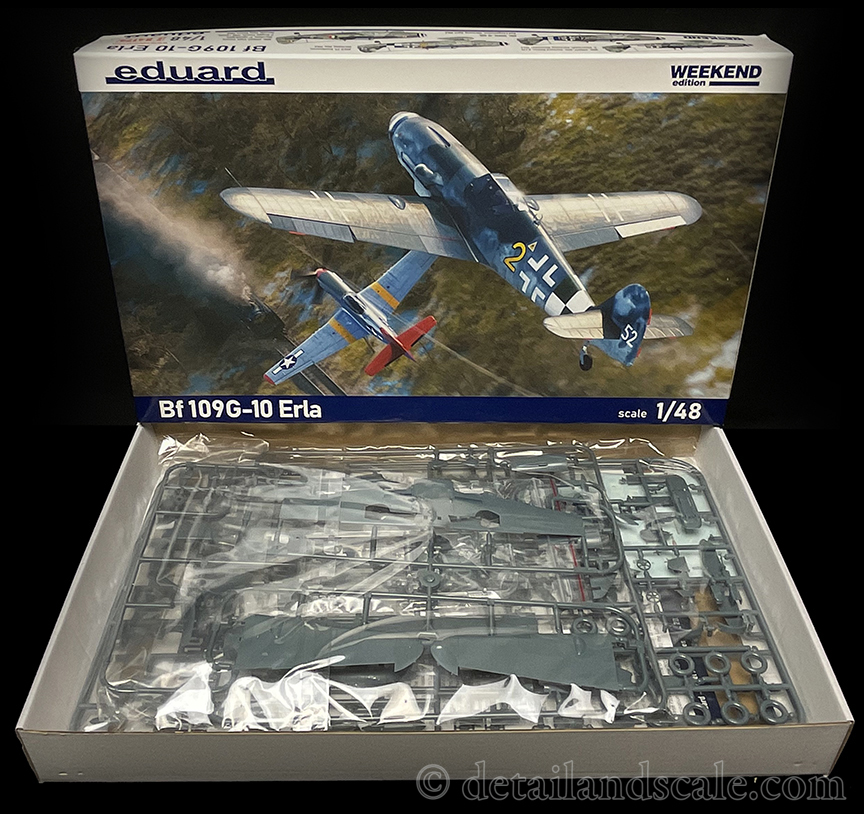 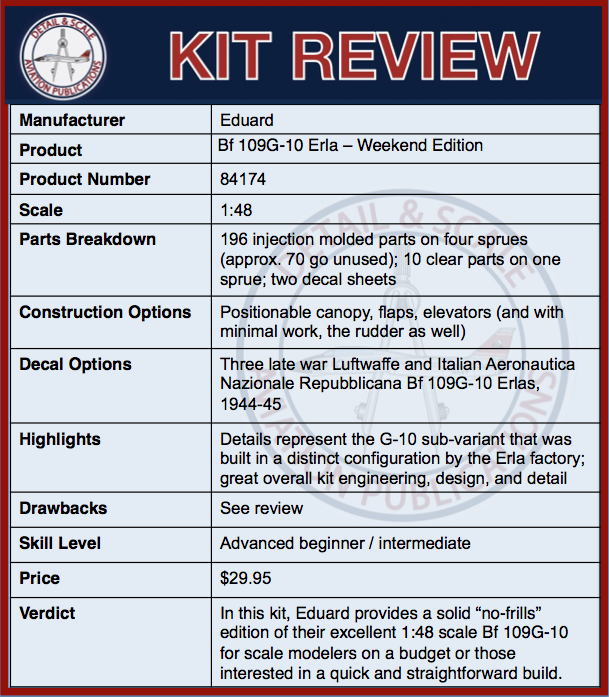 The Messerschmitt Bf 109 was one of the defining combat aircraft of World War II.  The Eduard second-generation of 1:48 scale Bf 109 kits is prolific, and it continues to grow. These are also among Eduard’s best 1:48 scale kits, and they feature great overall quality and detail.  In this review, we take a look with their Bf 109G-10 Erla Weekend Edition offering.

The Bf 109 was one of the two front-line single-seat German fighters of the Second World War.  The prototype flew in 1935 and marked the start of a production run of 33,984 airframes spanning dozens of variants and sub-variants.  It was a highly advanced fighter for the mid-1930s, featuring all-metal monocoque construction, a closed canopy, and retractable landing gear.  Ten years later, in the final days of the World War II, Bf 109s remained deadly opponents.  While many other aircraft came and went, late model variants of the Bf 109, technologically speaking, could hold their own even against the most modern Allied opponents.  Losses by then were high, however, owing to pilot attrition, as it proved impossible to replace the experienced, veteran, German aviators.

The Bf 109G, also known as the Gustav, was an evolutionary development of the Bf 109F-series.  The Bf 109G featured stronger wing structures, the windscreen was bulletproofed, and the fuel tanks were surrounded by light armor.  Other changes included tweaks to the outer wheel bay shape and the addition of air inlet scoops on both sides of the forward engine cowling for the newest Daimler-Benz engines.  Three different manufacturers produced the Bf 109G-10 at three different facilities: Messerschmitt in Regensburg, Wiener Neustädter Flugzeugwerke (WNF) in Ostmark, and the Erla Machine Works in Leipzig.  Each facility manufactured slightly different, idiosyncratic versions of what should have been the same aircraft.  The first to go into production was the Erla G-10, which was an interim variant.  These G-10s were a standard new build Bf 109G airframe paired with the DB 605 D-2 engine that was destined for the Bf 109K.  Since, the -K model was not quite ready for production, these engines were fitted into the Erla-built Gs.

Erla-built Bf 109G-10s further differed from other G-10s visually with an aerodynamic bulge of the engine cowl, but only on the left side.  They were missing the full, standard wide cowling (which the Germans evidently called the “Horse’s Ass cowling”) riveted to the rest of the fuselage.  Also, the bottom of Erla engine cowls had no bulges under the oil pumps unlike the Regensburg and WNF G-10s.  Erlas also had the longer gun troughs on the upper engine cowl.  The Erla factory produced 1,709 Bf 109G-10s before the end of the war.

Eduard’s Weekend edition of their 1:48 scale Bf 109G-10 Erla consists of 196 injection molded parts on four dark blue-grey sprues (about 70 parts go unused in this version of the kit), 10 clear parts on one clear sprue, and two decal sheets.  The decals provide markings for the following four aircraft:

Strengths:  The retooled Eduard Bf 109s are all superlative kits by any standards.   They hold their own against the exquisite Tamiya Bf 109 kit.  Further, all the good things that I said about their G-6, G-14, and Regensburg-built G-10 and the G-10 WNF kits (see these and related reviews HERE) apply equally in this case as well.  Further, Eduard offers a complete trilogy across ProfiPack and Weekend Edition issues of Regensburg, WNF, and Erla Bf 109G-10 kits in 1:48 scale.

This is the “no-frills” Weekend Edition of the Eduard Erla Bf 109G-10, and it differs from the earlier ProfiPACK Edition (reviewed HERE) in that it does not include the photoetched metal detail parts or masking set, and it has a different set of markings.

To recap: the unique Erla G-10 features described above are well represented here.  The attention to sub-variant details impressive.  Additionally, the kit has a range of construction options, including the positionable canopy, separate leading edge slats, flaps, ailerons, elevator, rudder, and radiator flaps.  Cockpit detail is relatively good, all the way down to the clear-cast fuel pipe.  Instrument dial faces are provided on the decal sheet. Exterior surface details, including the recessed panel lines, rivets, and fasteners are all simply sublime.  The builder can position the flaps as desired.  While the instructions show the separate elevators going straight-in, you can easily modify them if you want them dropped.  There is an even larger mounting pin for the rudder, so to deflect the rudder (if that is the look you are going for) just a tiny bit of work hacking off that mounting pin will get the job done.

Other details include the Erla canopy, standard and tall rudder, long and short tail wheel, optional 20mm underwing cannon pods, alternative propellers, different main wheel hubs, and choices of oil cooler housings, masts, bomb racks, and an optional centerline 300 liter drop tank.  These options are extensive and thorough, though again, not all are used in or are appropriate for this version of the kit.  The instructions indicate that only external fuel belly tank(s) are used here.

The wet-transfer decals are printed by Eduard and look great with excellent color, resolution, and thin, restrained carrier film.  The kit comes with rather diverse and very well-researched schemes to choose from (I really like the unusual Italian option, with over-painted German national insignias on the wings).  The second, smaller decal sheet contains a complete set of maintenance stencils for the airplane.

Weaknesses:  I cannot offer any substantive critiques of this kit (but of course 109 experts may be aware of minor issues I might not catch).  As is customary for an Eduard Weekend Edition kit, instrument faces and seatbelts are provided as decals.  Personally, I prefer them as photoetched or 3-D printed parts, but if a builder is happy with these items in decal form, you are all set.

Once again, Eduard provides another consistently great 1:48 scale Bf 109G-10 Erla in this Weekend Edition kit.  It is aimed at the scale modeler on a budget or the scale modeler looking for a quick, no-frills build.  Still, Eduard also produces a very wide range of additional detail sets for further detailing opportunities should the builder seek those as well.

We thank everyone at Eduard for the review sample of this kit.  You can visit them on the web at http://www.eduard.comand on Facebook at https://www.facebook.com/EduardCompany.