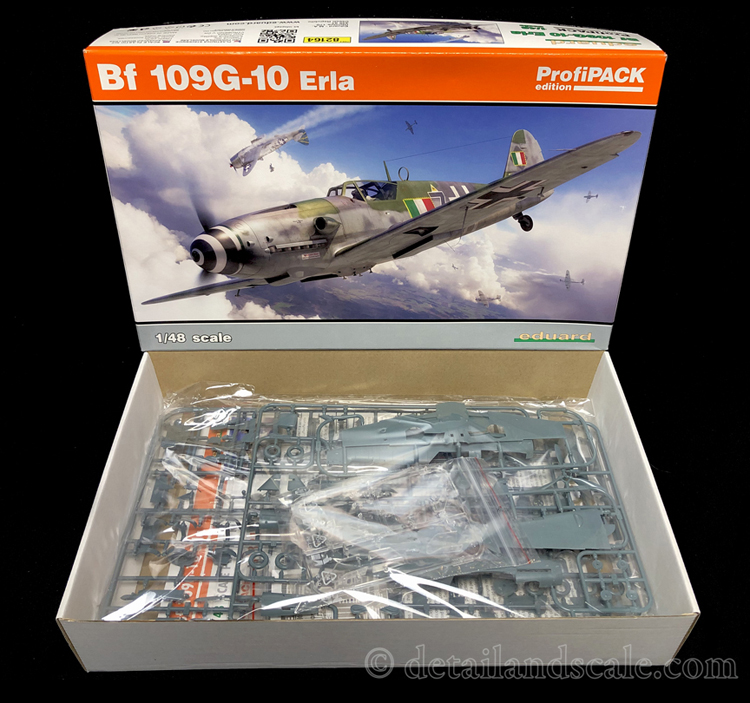 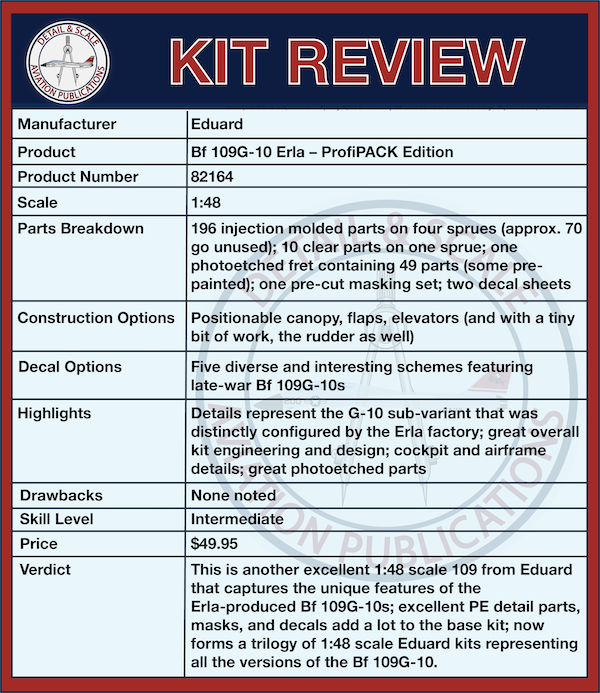 The Messerschmitt Bf 109 was one of the most iconic warplanes of WWII and one of Eduard’s best 1:48 scale kits.  Eduard’s latest second-generation of 1:48 scale Eduard Bf 109s is prolific and continues to grow with newly released versions every other month, or so it seems.  In this review, we take a look with their Bf 109G-10 Erla ProfiPACK edition.

The Bf 109 needs little introduction as one of the two premier single-seat German fighters of the Second World War.  The prototype flew in 1935 and marked the start of a production run of 33,984 airframes spanning dozens of variants and subtypes.  It was a highly advanced fighter for the mid-1930s, featuring all-metal monocoque construction, a closed canopy, and retractable landing gear.  Yet, Bf 109s were still deadly opponents ten years later.  While many contemporaries came and went, late model variants of the highly capable Bf 109 were still in the fight as jet fighters came onto the scene.

The Bf 109G, also known as the Gustav, was an evolutionary development of the Bf 109F-series.  Externally, 109Gs started off being nearly identical to the earlier -F model.  Internally, the wings were reinforced, the windscreen was bulletproofed, and the fuel tanks surrounded by light armor.  Other changes included outer wheel bay shape changes and the addition of air inlet scoops on both sides of the forward engine cowling, so as to accommodate newest of the Daimler-Benz engines.

Three different manufacturers produced the Bf 109G-10 at three locations:  Messerschmitt Regensburg, Wiener Neustädter Flugzeugwerke (WNF), and Erla Leipzig.  Each facility manufactured slightly different versions of what should have been the same aircraft.  The first to go into production was the Erla G-10, which was to be an interim variant.  These G-10s were a standard new build Bf 109G airframe paired with the DB 605 D-2 engine that was destined for the Bf 109K.  However, the -K model was not quite ready for production. So, instead of sitting around gathering dust, the engines were fitted into these -Gs.

Bf 109G-10s from Erla differed from other G-10s visually with the aerodynamic bulging of the engine cowl only on the left side.  They were missing the full, standard wide cowling (which the Germans evidently called the “Horse’s Ass cowling”) riveted to the rest of the fuselage.  Also, the bottom of the Erla engine cowls had no bulges under the oil pumps unlike the Regensburg and WNF G-10s.  Erlas also had the longer gun troughs on the upper engine cowl.  The Erla factory produced 1,709 Bf 109G-10s before the end of the war.

Eduard’s ProfiPACK edition of their 1:48 scale Bf 109G-10 Erla consists of 196 injection molded parts on four dark blue-grey sprues (about 70 parts go unused in this version of the kit), 10 clear parts on one clear sprue, 49 photoetched metal parts (some pre-painted) on one fret, a pre-cut masking set for the windscreen and canopy, and two decal sheets.  The decal sheet covers the following five airframes:

Strengths:  The retooled Eduard Bf 109 family are all superlative kits by any standards.  They hold their own against the exquisite Tamiya Bf 109 kit.  Further, all the good things that I said about their G-6, G-14, and Regensburg-built G-10 and the G-10 WNF kits apply equally this case as well.  In fact, with the three Bf 109G-10s now available, Eduard has completed their trilogy of G-10 kits in 1:48 scale.

The unique Erla G-10 features described earlier are well represented here.  The attention to sub-variant details is impressive.  Additionally, the kit has a range of construction options, including the positionable canopy, separate leading edge slats, flaps, ailerons, elevator, rudder, and radiator flaps.  The cockpit, especially with the photoetched metal instrument panel, belts, and clear-cast fuel pipe, is a real highlight.  In other words, the plastic parts for the kit cockpit are very good on their own, but the photoetched metal parts in the ProfiPACK set elevate it to a whole new level.  Exterior surface details including the recessed panel lines, rivets, and fasteners are all simply sublime.  You can position the flaps as desired.  While the instructions show the separate elevators going straight-in, you can easily modify them if you want them dropped.  There’s an even larger mounting pin for the rudder, so to deflect the rudder (if that’s the look you’re going for) just a tiny bit of work hacking off that mounting pin will get the job done.

The Eduard 1:48 scale Bf 109E-3 Weekend Edition is a no-frills boxing of this kit.  If that’s what you’re looking for, you can’t go wrong.  Still, if you wind up wishing for more detail, Eduard produces an entire range of photoetched metal and Brassin sets for their 1:48 Emil, from seatbelts to landing flaps and just about everything else in between. 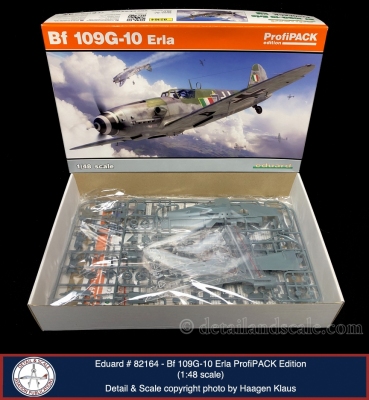 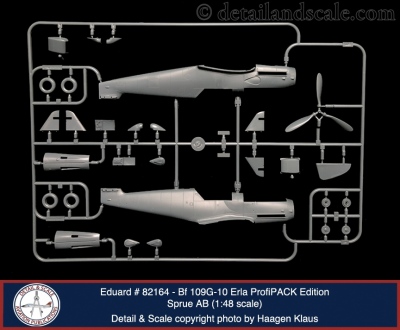 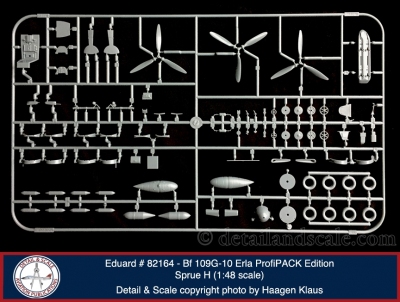 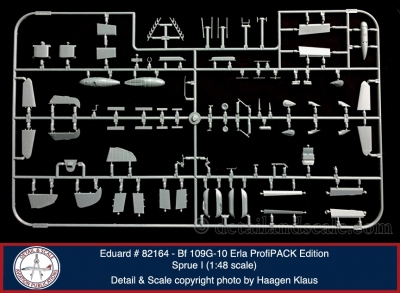 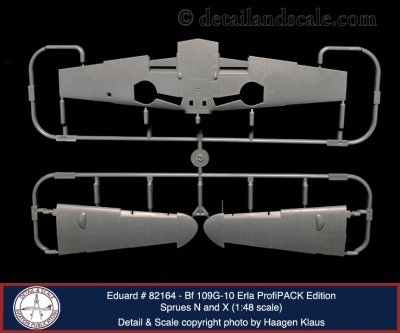 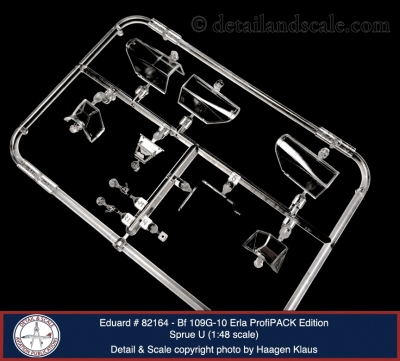 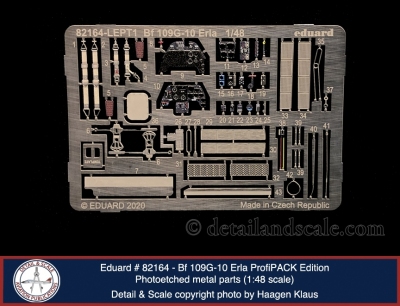 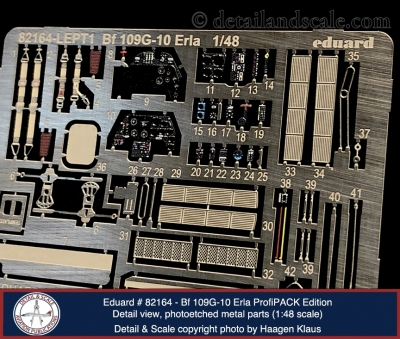 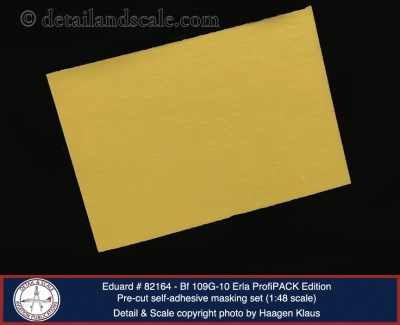 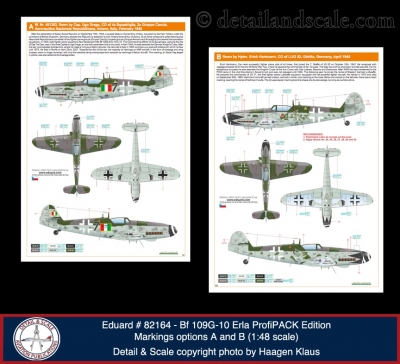 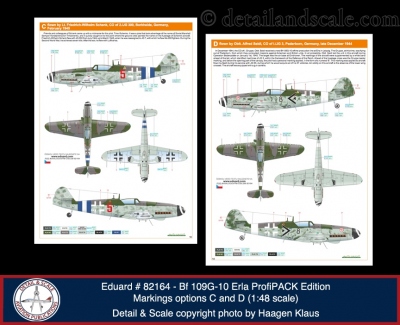 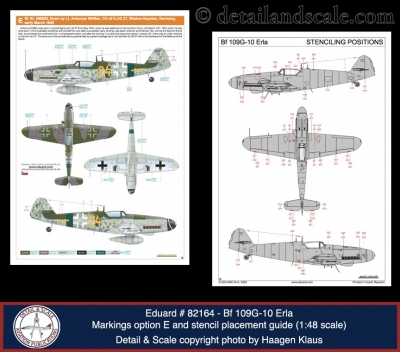 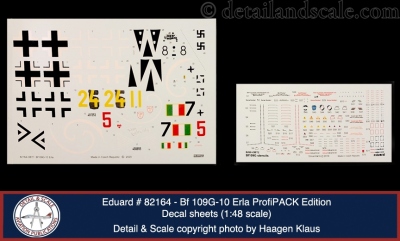 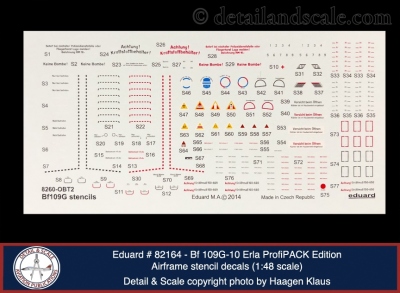 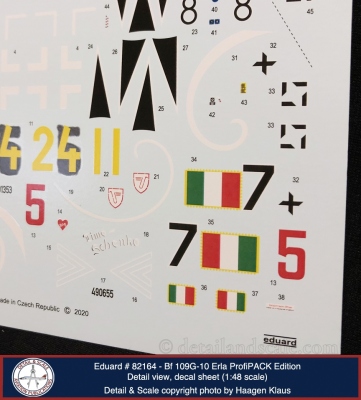