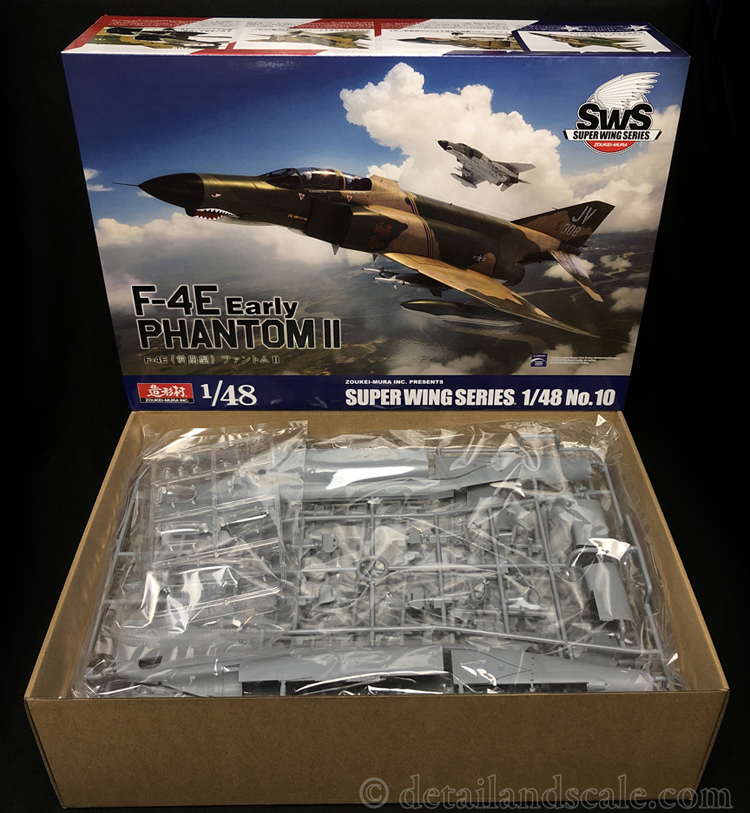 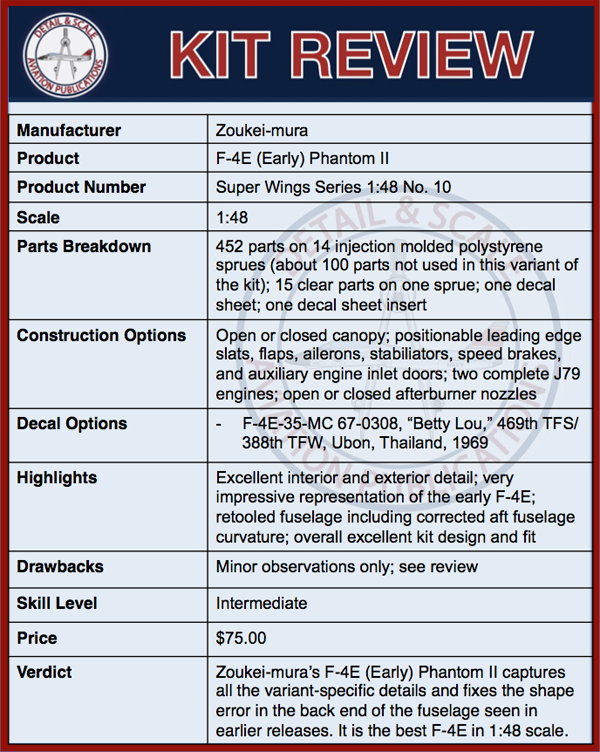 Zoukei-mura’s phamily of 1:48 scale F-4 Phantom IIs just keeps on growing. Building on their earlier F-4C, D, J, and S kits, the long-awaited and highly anticipated F-4E has recently been released. A sample of their 1:48 F-4E (Early) Phantom II kit arrived on our review bench last week, and we are happy to provide a look at this early gun-nosed Phantom II operated by the U.S. Air Force.;

The F-4 Phantom II is one of the best-known aircraft of the 20th century, originally developed for the U.S. Navy by McDonnell Douglas in the late 1950s as a two seat, dual engine, all-weather interceptor.  Then known as the F4H-1, it beat out the Chance Vought XF8U-3 Super Crusader to become the Navy’s principal carrier-based fighter of the 1960s.  As the Vietnam War intensified, the versatility of the F-4 was demonstrated as it served in interceptor, fighter-bomber, battlefield interdiction, recce, and FAC roles with the Navy, USAF, and USMC.  However, it did have some faults, and especially in the air combat arena.  The absence of a gun put the F-4 at a serious disadvantage.

When it was first designed in the 1950s, McDonnell Douglas engineers and the Pentagon were overly optimistic with the promise of the guided air-to-air missile age.  It was envisioned that the days of the close-in dogfight were over, and that all air combat would take place with missiles shooting down hostile aircraft at standoff distances.  This doctrine was challenged by reality over Vietnam.  The early generation radar-guided and heat-seeking missiles were far from reliable.  Long-range intercepts frequently degenerated into close-in knife fights, either because missiles failed or that the rules of engagement required visual identification of a bogey.  At that point, cannon-armed MiGs pressed short-range attacks while all an F-4 could do was to go defensive.

Externally mounted gun pods represented an interim solution, but the definitive response appeared in the USAF’s F-4E that featured the internally mounted 20mm M61A1 gatling gun.  The First F-4E flew in late August 1965.  Beyond the gun and lengthened nose to accommodate it, the F-4E included an additional internal fuel tank, updated avionics (including a vibration-resistant AN/APQ-120 radar), leading-edge slats for increased maneuverability, and the new J79-GE-17 turbojet engine.

The first F-4Es arrived in southeast Asia in 1969 and represented a major improvement in capability over the earlier F-4Cs and Ds.  A total of 1,389 were built, including orders (with others built under license) for 428 F-4Es that were operated by Japan, Israel, Iran, Greece, and Turkey.  The first F-4E was delivered to the Air Force in October 1967 and arrived in southeast Asia 13 months later.  By the mid-1970s, the F-4E started to be progressively replaced by the F-15 Eagle at which point the F-4E shifted from front-line USAF, USAFE, and PACAF service into roles with the Air National and the Air Force Reserve through the early to mid-1980s.  The last F-4Es in USAF service were four QF-4Es retired in 2016.

Zoukei-mura’s 1:48 scale F-4E (Early) Phantom II model kit comes on 14 injection molded polystyrene sprues totaling 452 parts (about 100 parts of which are not used in this variant of the kit).  Fifteen clear part comes on one clear sprue.  The detailed instruction booklet guides the build over 43 steps, a full-color, double-sided painting and markings guide and a very detailed stencil placement guide.  Markings for one airplane is provided:

Strengths:  Zoukie-mura’s 1:48 scale Phantom Phamily has been very well received over the last several years, and their 1:48 scale F-4E is a very welcome addition to what is planned as a subfamily of F-4Es, F-4EJs, and F-4Gs.  These kits are significantly better than the earlier generation Hasegawa 1:48 scale F-4s (which are still good kits!) that previously ruled the roost as the best kits of their kind in this scale.

Of particular note, this F-4E kit is mostly all new.  Of the 14 main sprues, 11 are brand new and represent totally new tooling never before present in earlier Z-m Phantom IIs.  Some of this is obviously because the long-nosed fuselage, wings, and cockpit details of the F-4E differ from earlier Phantoms.  The gun-nosed -E features look very well represented and quite accurate here, down to the muzzle and the gun gas purge system air intake, and the early leading edge slats that were blown down by engine bleed air.  The WSO’s flight controls are there, as is the nose landing gear taxi light and the low-pressure (200 psi) main wheel tires used on the USAF Phantom IIs.

Other key features in this kit are an open or closed canopy (the latter provided by an optional single piece windscreen/canopy part), an extended or compressed nose gear strut, positionable leading edge slats, flaps, and ailerons, open or closed speed brakes, open or closed variable geometry exhaust nozzles, and horizontal stabilators that can be positioned at one of three angles (upward, downward, or neutral). The design of the air inlet splitter plates has also been reworked as separate parts to making assembly easier.

A key observation:  some controversy surrounded earlier Zoukei-mura F-4s where it had been pointed out that the curvature of the aft end of the fuselage was a bit incorrect.  Indeed, it was.  For some, it was a major accuracy error.  For others (including your reviewer), the shape issue was noticeable but not egregious.  In this new F-4E, Zoukei-mura responded to the critique and re-worked the aft end each fuselage half to represent the correct degree of curvature.  It appears to be accurate in comparison to my references and the Hypersonic Models correction set applicable to the earlier F-4C/D/J/S kits.  Way to go, Z-m!

All the accolades that I have previously stated regarding other Zoukei-mura 1:48 scale F-4s apply to the F-4E kit as well, owing to shared design.  The kit itself features an excellent overall accuracy and fidelity of detail.  The parts are gorgeous just sitting on the sprues.  The cockpit’s instrument and console details, along with other parts such as the wheel hubs, are on par with most resin detail sets.  The Martin-Baker Mk. 7 ejection seats are also nearly perfect for an injection-molded seat (but see below).  Each seat pad, backpad, and parachute pack are all separate parts.  This approach allows for the most accurate and detailed seat that injection molding can produce.  The shape of the ejection handles, which is sometimes quite badly done in other F-4 kits, is accurate here.  There’s also a choice to build an extended stowable boarding ladder or larger external boarding ladder that hooks onto the cockpit sill.

The cockpit and nose gear well assembly are integrated, such that the floor of the cockpit and gear well roof are shared by the same part.  This greatly simplifies the fit and provides precise alignment.  The beautifully detailed cockpit sill, which normally is best represented with a photoetched metal detail part, is a single plastic part that drops down on top of the cockpit’s sidewalls.  The two sets of clear parts allow for either open or closed canopies.  The auxiliary air intake doors on the bottom of the fuselage can be positioned open.

The airframe exterior is rich with detail, such as that seen with the thousands of small perforations on the intake splitter plates (which vented boundary air overboard) and are beautifully represented.  There’s also a great set of flapper doors on the back portion of the forward Sparrow missile wells.

The complete intake trunking leads to a pair of complete J79 engines that appear accurate in shape and layout but are still fairly basic.  There’s a fair amount of plumbing and the prominent lever assemblies on the side of the motor are omitted.  But of course you’ll never see the J79s between from their first stage compressor blades to the afterburner nozzles in the completed model, since the engines buried inside the fuselage – except for what you can see when the auxiliary engine intake doors are open (which is anytime the F-4 is sitting on the ground).

Other notable high points include features such as the separate inboard and outboard flaps, open or closed speed brakes, two 370-gallon outboard wing drop tanks, one 600-gallon centerline external fuel tank, two TERs, two MERs, good sway braces, and a very nicely made set of four AIM-7E Sparrows and AIM-9E/J Sidewinders.  However, do watch out for the fine seam lines on the missile bodies that you’ll want to sand down.

Cartograf of Italy produced the decal sheet and it is beautifully made.  The “Betty Lou” carried the classic SEA camouflage paint scheme with a shark mouth that was first applied before its deployment to southeast Asia at Eglin AFB.  There’s also a TON of stenciling for both the airplane and the missiles, and they all look right.  The stenciling is very impressive as it is so incredibly thorough.

Weaknesses:  this is a superlative kit by any measure, but there are a few perceived shortcomings to ponder.

The ejection seats lack shoulder harnesses and lap belts, but aftermarket belts are inexpensive and easy to obtain.  Similarly, the plumbing in the nose gear well is pretty basic and sparse, and even one of the two really large bleed air pipes is absent.  Also, if the model is built without the Sparrow missiles, blank off the inside of the slots where the missile’s fins extend from the missile well into the fuselage.  Otherwise, you’ll be able to look right into the model’s interior. The engine display stand/cradle is technically inaccurate. The instructions call it “a simplified display stand” and that’s fair enough.  J79s were removed by a hydraulically powered cart and maintained on a standard wheeled cart.  The stand in the kit does not represent either cart.

Zoukei-mura’s first F-4EJ kit has arrived in the form of this limited edition F-4EJ Kai commemorating the final operational flight of the Phantom II JASFD service.  It is the best F-4EJ in any scale, and they nailed the variant-specific details.  We look forward to their future release of F-4EJ kits starting in 2021.

If you’re hoping to acquire this kit, I suggest acting quickly.  Zoukei-mura is only producing a finite number of them, and most have already been spoken for through their pre-order process, which you can find through Volks USA HERE or the Zoukei-mura site HERE.  Their U. S. preorder deadline is December 13, 2020, and shipping will occur by early February 2021.

Sincere thanks are owed to Mr. Hideyuki Shigeta, the president of Zoukei-mura and their staff providing this sample.  You can find out more about them at http://www.zoukeimura.co.jp/en/  and follow Mr. Shigeta’s blog at http://www.zoukeimura.co.jp/en/sentiment/oyajiblog_108.html, which is a good way to follow development of their kits and other activities of interest.