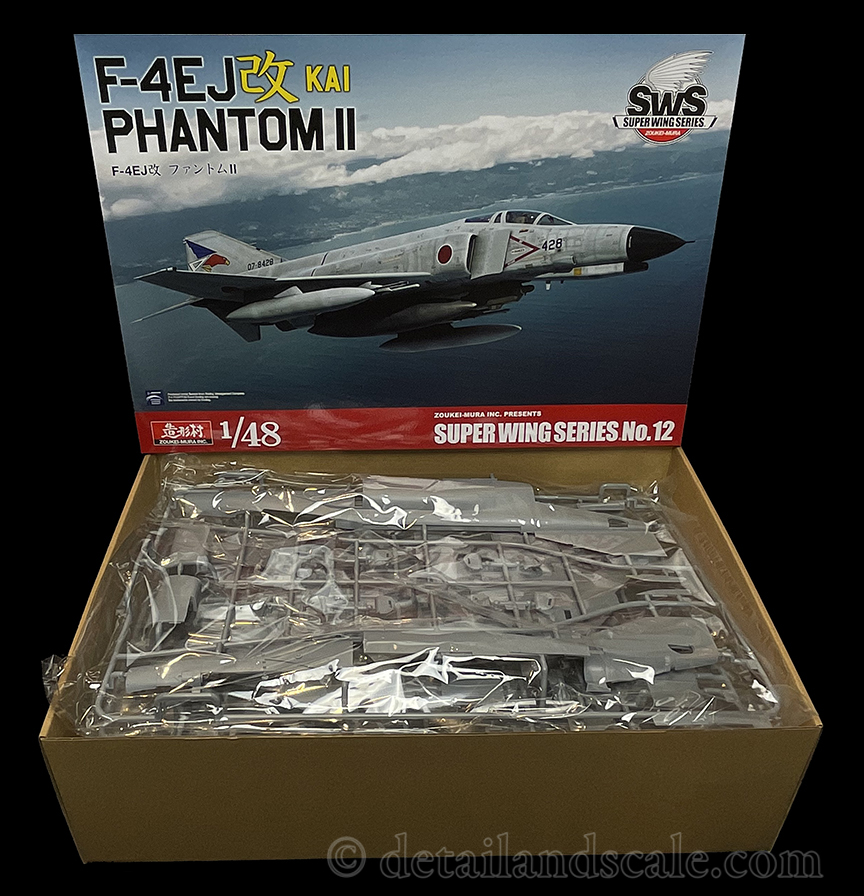 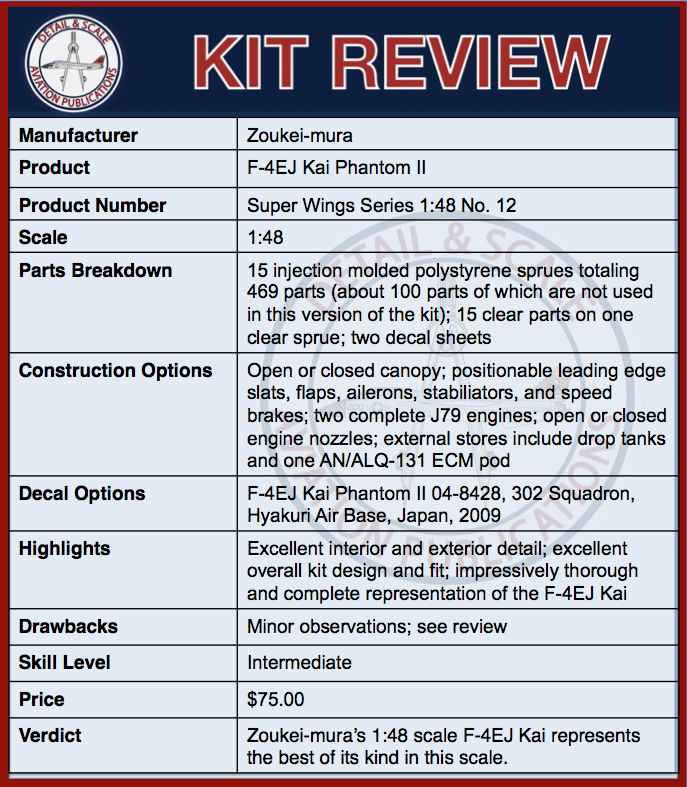 Japanese kit manufacturer Zoukie-mura continues to roll out new kits of the F-4 Phantom II in 1:48 scale.  Their “Phantom Phamily” already features issues of the F-4C, F-4D, F-4E (Early), F-4EJ, F-4J, and F-4S (all of which you can read reviews about HERE).  In this 2021 release, it looks like we now have their mainstay kit of the F-4EJ Kai, which was an F-4E variant developed and flown by the Japanese Air Self Defense Force.  A sample of the kit just arrived from Kyoto on our review bench.  Let’s sit down with Zoukei-mura’s Kai and see what they have for us.

The F-4 Phantom II was originally developed for the U. S. Navy by McDonnell Douglas in the late 1950s as a two seat, two engine, all-weather supersonic interceptor.  The versatility of the F-4 was demonstrated in both peacetime and at war as it served in interceptor, fighter-bomber, battlefield interdiction, recce, Wild Weasel, and FAC roles with the U. S. Navy, USAF, and USMC into the early 1990s.

In 1968, the Japanese Air Self-Defense Force (JASDF) purchased 140 F-4Es, designated as the F-4EJ Phantom II.  They differed from the USAF versions and lacked aerial refueling and ground attack capabilities.  Mitsubishi Heavy Industries built 138 of these F-4EJs under license in Japan, with the final aircraft delivered in 1981.  Later, 90 of these JASFD Phantoms were modernized by Japan as the F-4EJ Kai.  These jets featured restored aerial refueling and ground attack capacity, the APG-66J radar, carriage of the AN/ALQ-131 ECM pod, the addition of blade antennas on the spine, and the J/APR-6 radar warning receiver system mounted on the top of the vertical stabilizer and wingtips.  The JASDF operated the venerable Phantom II for 48 years.  The final operational squadron flying the F-4EJ Kai retired its last airplanes in late 2020 and began the transition to the F-35A.

Zoukei-mura’s 1:48 scale F-4EJ Kai Phantom II model kit comes on 15 injection molded polystyrene sprues totaling 469 parts (about 100 parts of which are not used in this variant of the kit).  Fifteen clear parts are found on one clear sprue.  The detailed instruction booklet guides the build over 40 steps.  A full-color painting and markings guide includes a very detailed stencil placement guide.  Markings for one airplane is provided:

Strengths:  Zoukie-mura’s 1:48 scale Phantom Phamily has been very well received over the last six years, and their 1:48 scale F-4E and EJ are very welcome additions to a subfamily of F-4Es, F-4EJs, F-4Fs, and F-4Gs that are now in the process of release over the next few years.

This kit is based on the 2020 Zoukei-mura F-4E (Early) kit.  It was followed by a limited edition F-4EJ Kai kit that commemorated the aircraft’s retirement in late 2020.  This issue of the kit is intended to serve as the primary F-4EJ Kai release by Zoukei-mura.

Overall, these F-4E/EJ Kai kits feature significantly new tooling that shares little in common with their earlier F-4C and F-4D kits.  Most notably, they have a retooled aft fuselage (the earlier F-4C/D/J/S kits did not have quite the full degree of curvature that it needed).

The parts specific to the F-4EJ Kai can be found on Sprue P.  They include the Kai’s updated front and rear cockpit displays and control consoles, the new pilot’s instrument coaming with the HUD, the distinctive ribbed radome, new wingtips and a vertical stabilizer cap, the spine blade antennas, and even a new drag chute cover with the relocated position light.  To my knowledge, nothing has been overlooked here.  It’s excellent.  Other specific F-4EJ parts (e.g., gun muzzle, stabilator stiffeners, cockpit rear-view mirrors) are distributed across a few other sprues.

All the accolades that I have previously stated regarding other Zoukei-mura 1:48 scale F-4s apply to this kit of the F-4EJ Kai as well.  But, just to recap: the kit itself features an excellent overall accuracy and fidelity of detail.  The parts are gorgeous just sitting on the sprues.  The cockpit’s instrument and console details, along with other parts such as the wheel hubs, are on par with most resin detail sets.  If cockpit painting is not your thing, alternate decals are provided.  The Martin-Baker Mk. 7 ejection seats are also nearly perfect for an injection-molded seat (but see below).  Each seat pad, backpad, and parachute pack are all separate parts.  This approach allows for the most accurate and detailed seat that injection molding can produce.  The shape of the ejection handles, which is sometimes quite badly done in other F-4 kits, is accurate here.  There’s also a choice to build an extended stowable boarding ladder or larger external boarding ladder that hooks onto the cockpit sill.

The cockpit and nose gear well assembly are integrated, such that the floor of the cockpit and gear well roof are shared by the same part.  This greatly simplifies the fit and provides precise alignment.  The beautifully detailed cockpit sill, which normally is best represented with a photoetched metal detail part, is a single plastic part that drops down on top of the cockpit’s sidewalls.  The two sets of clear parts allow for either open or closed canopies.  The auxiliary air intake doors on the bottom of the fuselage can be positioned open.  The clear parts are optically beautiful – crystal clear, flawless, and no seams.  An optional single piece windscreen and canopy part is provided should one choose to build their Phantom II kit with the canopies lowered.

The airframe exterior is rich with detail, such as that seen with the thousands of small perforations on the intake splitter plates (which vented boundary air overboard) and are beautifully represented.  There’s also a great set of flapper doors on the back portion of the forward Sparrow missile wells.  The complete intake trunking leads to a pair of complete J79-GE (IHI)-17 engines as used in the F-4EJ Kai.  They appear accurate in shape and layout but are still fairly basic.  There’s a fair amount of plumbing and the prominent lever assemblies on the side of the motor are omitted.  But of course, you’ll never see the J79s between from their first stage compressor blades to the afterburner nozzles in the completed model, since the engines are buried inside the fuselage – except for what you can see when the auxiliary engine intake doors are open (which is anytime the F-4 is sitting on the ground).  Optional open or closed afterburner nozzles are included.

Underwing stores are provided in the form of drop tanks and an AN/ALQ-131 ECM pod.  While Sidewinder and Sparrow missiles can be found on the sprues, some represent older versions of the weapons not used on the Kai in 2009.  For the sake of accuracy, do not use the missiles especially on Sprue F.

Cartograf printed the decals, and they are technically superlative.  Markings come on two sheets.  The larger sheet contains nearly all airframe and pylon stencils.  It is a very comprehensive set of fine maintenance markings from nose to tail.  A nice touch involves the set of decals that simulate the windscreen and canopy seals.  Also, a set of alternative decals is provided for the instrument panels and side consoles.  The smaller sheet proves the primary set of aircraft-specific markings.  It also looks like it has a bonus set of markings for at least a few other Kai operators, and the sets of individual tail numbers that are provided means that one can cobble together complete tail numbers for just about any specific F-4EJ Kai that you could wish to build.

Weaknesses:  This is a superlative kit by any measure, but there are a few perceived shortcomings to ponder.  The ejection seats lack shoulder harnesses and lap belts, but aftermarket belts are inexpensive and easy to obtain.  Similarly, the plumbing in the nose gear well is pretty basic and sparse, and even one of the two really large bleed air pipes is absent.  You will also want to blank off the inside of the Sparrow missile well slots.  Otherwise, you’ll be able to look right into the model’s interior.  The engine display stand/cradle is technically inaccurate.  The instructions call it “a simplified display stand” and that is fair enough.  J79s were removed by a hydraulically powered cart and maintained on a standard wheeled cart.  The stand in the kit does not represent either cart.

Zoukei-mura’s F-4EJ Kai is the best F-4EJ in any scale, and they nailed the variant-specific details.  We look forward to their future release of more F-4Es and their eagerly anticipated F-4G kit coming soon.

Sincere thanks are owed to Mr. Hideyuki Shigeta, the president of Zoukei-mura and his staff for providing this sample.  You can find out more about them at http://www.zoukeimura.co.jp/en/ and follow Mr. Shigeta’s blog at http://www.zoukeimura.co.jp/en/sentiment/oyajiblog_113.html which is a good way to follow development of their kits and other activities of interest, including the latest developmental work on their 1:32 scale Fw 190A and Bf 109G kits.