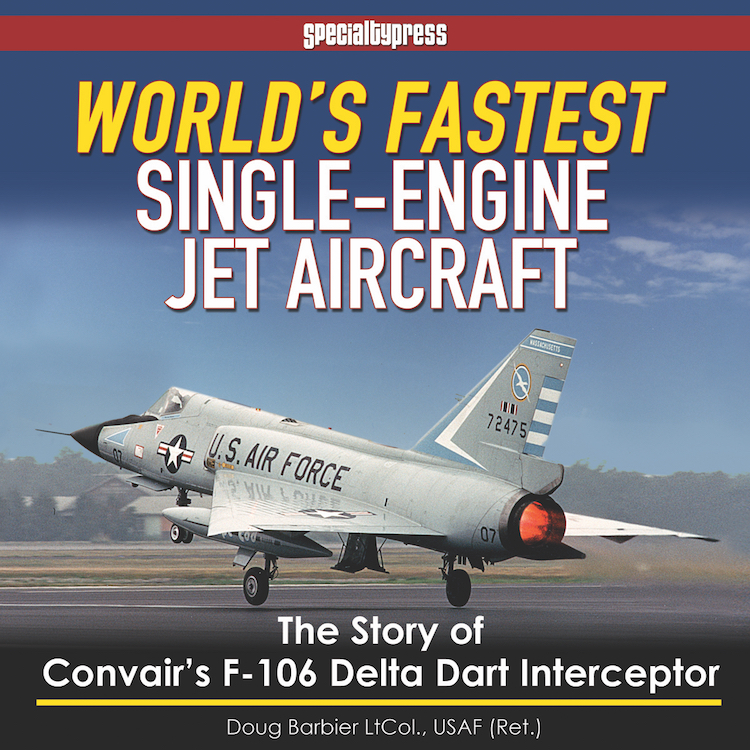 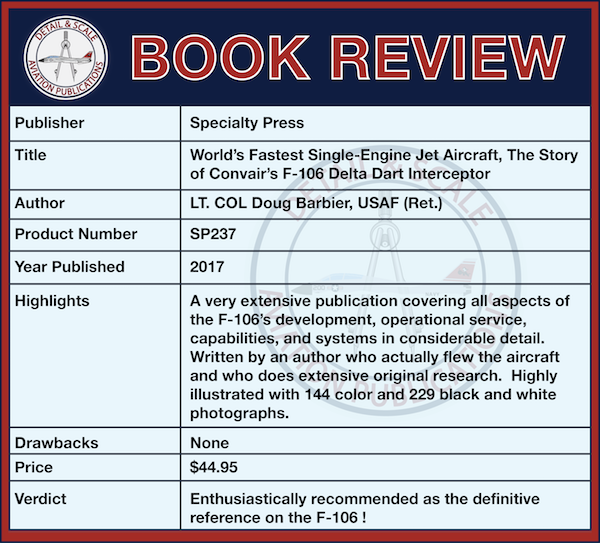 Reviewer’s note:  In the interest of full disclosure, I have known the author, Doug Barbier, for many years, and I was a contributor of photographs to this book and am credited with doing so in the Acknowledgements.  In the time I have known Doug, he has always been a meticulous, detailed, and objective researcher, and his efforts and abilities as such are very noticeable in this publication.  The fact that he actually flew the F-106 Delta Dart during his years with the Air National Guard only adds to his excellent coverage of this historic aircraft.

Billed as the “Ultimate Interceptor” by the U. S. Air Force, Convair’s F-106 Delta Dart was the last U. S. aircraft developed specifically to serve as a fighter-interceptor with the mission of defending airspace against enemy bombers, and it was used in operational service with the U. S. Air Force and the Air National Guard.  It was developed from the F-102 Delta Dagger, and its gestation period was long and difficult, but when the aircraft was finally built, it exhibited amazing performance.  In December 1959, it set a world’s speed record of Mach 2.4, and that record has never been broken by a single-engine jet aircraft.  This feat is reflected in the title of this new publication.

In his book, Doug Barbier covers every aspect of the F-106’s development, service, and retirement with the U. S. Air Force and Air National Guard.  The information and illustrations presented are so extensive that they are sure to please any historian and military aviation enthusiast.  Doug begins with three chapters that trace the aircraft’s development from its origins as the F-102B, which it was originally designated, through its design and flight testing.  Difficulties encountered as engineers tried to push the envelope and achieve the speed and other performance specifications stated in U. S. Air Force requirements are discussed.  This all took place during a time of rapidly changing high-speed aerodynamic designs and jet engine development.  Problems that surfaced as the aircraft began flight testing and fixes that solved them are discussed in the extensive text.

Next are several chapters that provide an in-depth look at the aircraft, its avionics systems, and the weapons it carried to perform its mission of intercepting bombers in any weather, day or night.  Not only is the hardware covered, but the test programs associated with each are discussed.  Later chapters are dedicated to the improvement programs that took place during the Delta Dart’s operational service, and enhancements like the in-flight refueling capability, clear canopy and addition of the Vulcan cannon, as well as other items are illustrated and explained.

Other chapters cover the squadron use of the F-106 in both active Air Force and Air National Guard units.  This includes a look at the command structure of the Aerospace Defense Command and the Air National Guard.  A brief unit history of each squadron that flew the Six is provided, including base assignments and any deployments.  Even the use by NASA is included.  Information about alerts, exercises, competitions, and deployments add to this interesting and informative part of the book.  Photographs provide a look at some of the markings used by each of the squadrons.

Finally, the QF-10g Pacer Six drone program is covered in a chapter called “A Warrior’s Death.”  The twenty-three chapters are followed by five appendixes that provide valuable data about the Six.  From Chapter 1 through Chapter 23, the coverage is detailed, extensive, and thorough.

There are none when it comes to the book itself, but it is only available at this time in hardback.  Hopefully, a softcover edition will be forthcoming.

Simply put, this is the most extensive, thorough, and insightful publication available on the F-106 Delta Dart.  It examines every aspect of the aircraft, its systems, development, and operational service imaginable.  It is a must-have reference for anyone interested in this important Century Series fighter.  It receives our highest recommendation.

You can find World’s Fastest Single-Engine Jet Aircraft, The Story of Convair’s F-106 Delta Dart Interceptor available at amazon.com, hopefully at your local hobby shop, and at the Specialty Press website (HERE) where you can also browse their other titles.