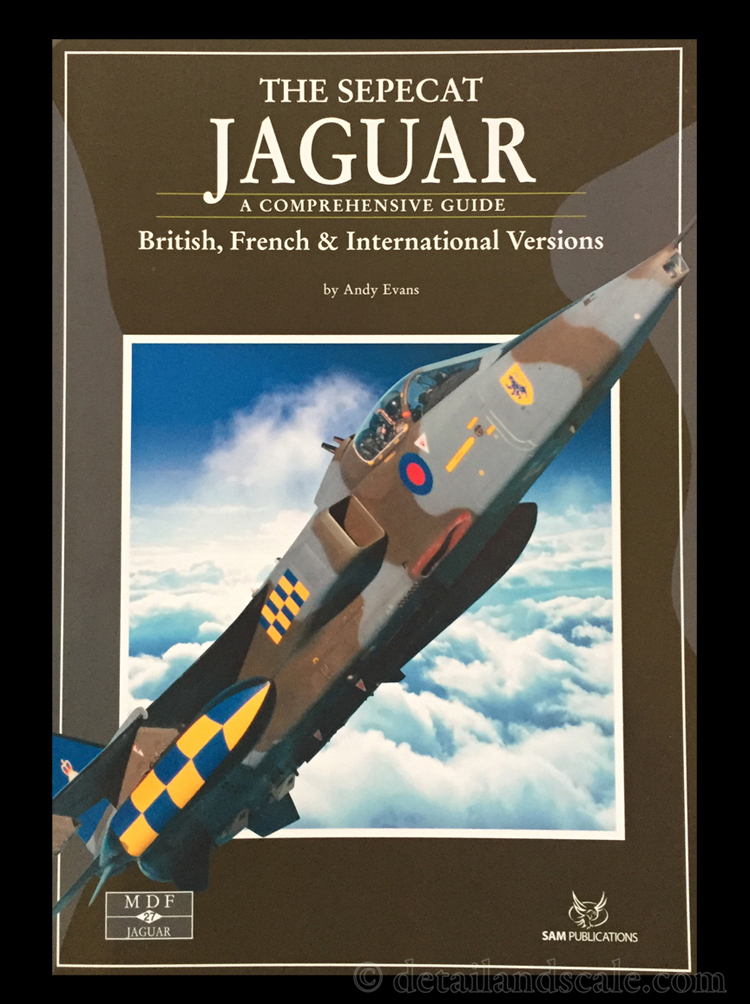 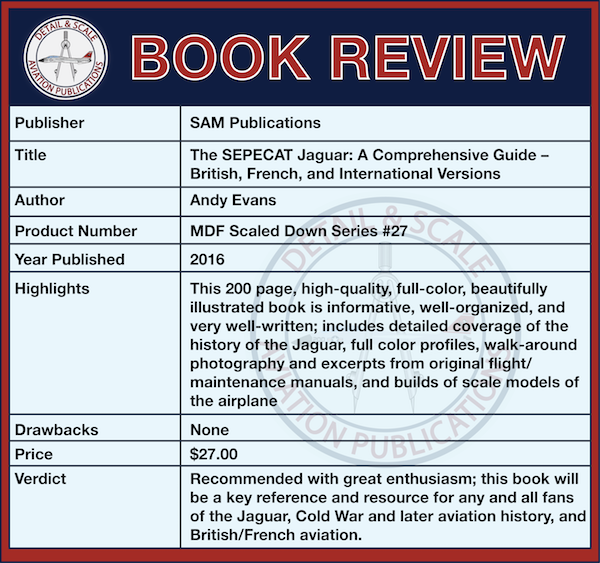 The SEPECAT Jaguar was a prominent a British/French attack aircraft that played important roles in the Cold War and both Gulf Wars, and participated in several smaller conflicts pursued by export customers.  The perhaps slightly unlikely genesis of the Jaguar can be found in the mid-1960s.  Great Britain and France faced similar problems.  England needed a new supersonic jet trainer to replace the Folland Gnat T.1 and Hawker Hunter T.7, while France required an inexpensive, subsonic dual role trainer and light attack aircraft to succeed the Fouga Magister and Dassault Mystère IV.  In 1965, SEPECAT (Société Européenne de Production de l’avion Ecole de Combat et d’Appui Tactique) was established as a joint venture between BAC and Breguet.  The resultant design evolved into a potent and effective strike jet that first flew in 1968 and was retired by France in 2005 and the U.K. in 2007.  In this 2016 SAM Publications title, Andy Evans provides readers a truly thorough look at the history, systems, combat record, and scale modeling of the Jaguar.

Evans’s 200-page book on the Jaguar is printed in full color on high-quality paper.  There’s not a wasted inch of layout on any page, and the book is rich in detail, content, and high-resolution photos and illustrations.  The text is divided into seven chapters: (1) Design and Development:  Origins of an Icon; (2) RAF Service:  U.K. Jaguars in Detail; (3) French Service:  Armee de l’Air Operations; (4) Jaguars for Export:  Foreign Service; (5) Jaguar at War:  Conflicts around the Globe; (6) Walk-Arounds:  Jaguar GR.3, Jaguar A, and Jaguar ACT), and; (7) Modeling the Jaguar in Popular Scales.  Interspersed between Chapter 5 and 6 is a section containing 25 color profiles of Jaguars in British, French, Nigerian, Omani, Indian, and Ecuadorian service.

These chapters represent the primary bulk of the text and illustrations.  There’s really no wasted space or content – it’s all very well laid out, informative, well-written, and I learned a good deal of new information about the Jaguar.  The illustrations are also excellent, from the archival photos to the outstanding walk-around photos.  I especially like the material on the navalized Jaguar variant that never was produced – what could have been…

Chapter 7 features five builds of Jaguar kits:  a 1:48 scale Revell Jaguar GR.1 “RAF Cat” by James Dickerson, a 1:48 scale Revell Jaguar GR.1 “RAF Gulf War” by James Ashton, a 1:48 scale Kitty Hawk Armee de l’Aire Jaguar A by Oliver Soulliers, another 1:48 scale Revell Jaguar by Mario Serelle, but in Omani markings, and a 1:72 scale Hasegawa Jaguar GR.3A “Arctic Cat” by Angel Exposito.  Each of these builds are very well described in varying lengths and levels of detail, but they are all very well illustrated, providing the scale modeler with lots of ideas, construction details, finishing tips, and examples aftermarket products variously integrated into these builds.  These are all very high-quality efforts to be sure and my “IPMS judge’s eye” is quite impressed by all of them.  Yet, Exposito’s work in taking the rather dated Hasegawa kit and turning it into such a masterful final product is the most inspiring (to me, at least!).

The book concludes up with a set of three extensive appendices.  Appendix 1:  Understanding the Subject provides Jaguar line drawings illustrating the external airframe differences between the principal Jaguar variants.  Appendix 2:  Technical Diagrams, provides detailed illustrations of the airframe, systems layout, cockpit layouts, ejection seat, landing gear, and more.  These illustrations appear to be reproductions from the original Jaguar flight and maintenance manuals, and they are very detailed, indeed.  Appendix 3 is an exhaustive “kitography” that lists all the kits, aftermarket decals, and aftermarket accessories ever produced for the Jaguar (dominated by products in 1:48 and 1:72 scales).  For at least a few years now, Kitty Hawk has listed a 1:32 scale Jaguar kit as being in the works, and it will be nice to eventually have a big-scale “Cat” on the market.

I can offer no meaningful critiques of this book.

This book is excellent.  It is informative, well-organized, well-written, and just a pleasure to read.  The graphic design and layout of the volume is first-rate, and every single one of the pictures was carefully chosen for its quality, informational content – speaking to the historian, aviation enthusiast, and scale modeler alike.  It is a key reference and resource for any and all fans of the Jaguar, Cold War and later aviation history, and British/French aviation.