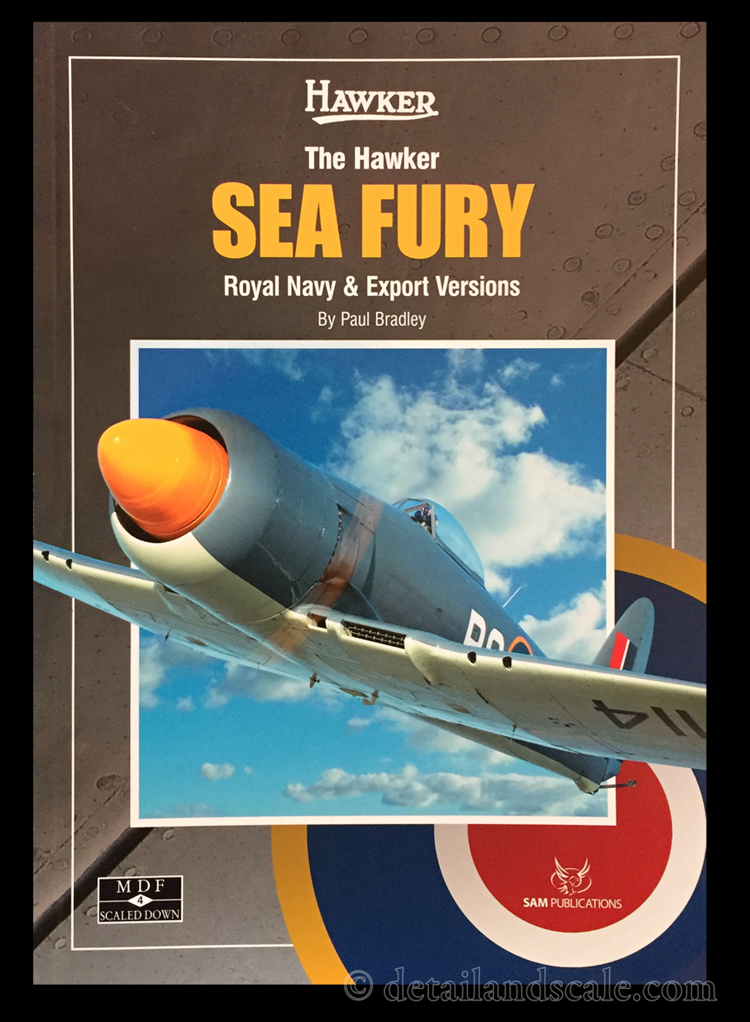 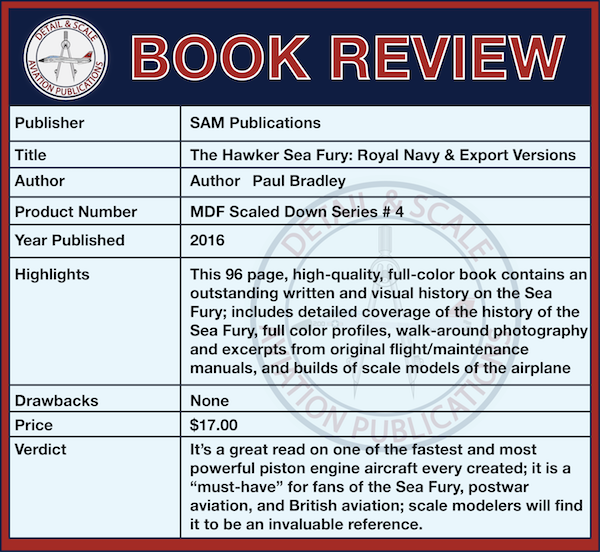 One of the most remarkable fighter aircraft to emerge in the 1940s was the Hawker Sea Fury.  This airplane in many ways was the bridge between the earlier era of piston-engine fighters and the dawn of the jet age.  It was the last propeller-driven fighter to serve with the Royal Navy and was among the fastest single piston-engine aircraft ever built.  Derived from the mighty Hawker Tempest, the Sea Fury entered service in 1947 and made its mark in Korea as both a dogfighter (holding its own and even victorious against the MiG-15) and as a ground attack platform.  In this recent SAM Publications volume, author Paul Bradley explores the background, history, and technical details of the Sea Fury.  The book also includes three builds of scale Sea Fury models and detailed walk-arounds of preserved Sea Furies.  Let’s take a look.

Bradley’s 96-page book on the Sea Fury is printed in full color on high-quality paper.  There’s not a wasted inch of layout on any page, and the book is rich in detail and content.  The text is divided into four chapters (Sea Fury Development, The Sea Fury in Fleet Air Arm Service, Export Sea Furies, and the Sea Fury at War).  Each chapter is replete with detailed information on the structure, development, systems and components, variants, and operational history of the Sea Fury in British and Australian, Canadian, Burmese, Cuban, German, Iraqi, Moroccan, Dutch, and Pakistani service.  An overview of the combat history of the Sea Fury follows, from the Korean peninsula to various Middle Eastern conflicts and Cuba’s revolutionary war period.

Following these chapters, there’s a section containing 20 really excellent color profiles of the Sea Fury by Bradić Srećko that covers the prototype to the two-seat T.20 and dual trainer variants.  The color profiles also feature the diverse markings and color schemes seen on Sea Furies from 1945 into the 1970s and two privately owned airframes as they appeared in the 1970s and 1980s.

The next section comprises three detailed and critically-minded builds of Sea Fury scale models.  These include a conversion of the 1:48 scale Hobbycraft FB.11 to the Sea Fury prototype, a rather striking build of the equally impressive Aki 1:72 scale resin kit, and the Special Hobby 1:72 scale T.20.  These are very thoroughly described and illustrated in with some great photos.  The prototype conversion is particularly neat work, and Bradley really takes it to the house with the Aki resin kit.  The two-place T.20 kit is also a really well done.  Considering that it was a limited-run low-quality kit, the skill of the author as a builder underscores the great final product.

The book wraps up with a set of four extensive appendices.  Appendix 1 features a 26-page detailed walk-around of the Sea Fury preserved at the Canadian Aviation and Space Museum in Ottawa complemented with in-progress photos of the FB.11 under restoration in Duxford. There’s just about nothing that remains uncovered, from the Centaurus powerplant to the cockpit, landing gear, and gear wells.  The last half of this section includes many detailed reproductions from Sea Fury flight manuals, and feature yet more extensive references on the cockpit, engine, and internal structures.  In sum, Appendix 1 is an exceptionally well-done and very useful resource for the scale modeler.  Appendix 2 is an exhaustive “kitography” that lists all the Sea Fury kits, from the Fisher Model and Pattern 1:32 scale resin kit to 1:144 scale Miniwings offering.  Also listed are all the aftermarket decals and aftermarket accessories ever produced for the Sea Fury.  Appendix 3 presents a summary of the entire Sea Fury production run, marks, and serial numbers, and Appendix 4 provides a listing of all Royal Navy Sea Fury units.

There’s very little to critique here, however, I was left wanting more beyond the one sentence describing the actions taken by Dutch Sea Furies against guerillas in the Dutch East Indies in 1947-48.  There’s certainly more about that conflict that could have been discussed.

Overall, I found Bradley’s writing style to be top-notch – well-organized, well-written, and readers will find a very smooth narrative that is a pleasure to read.  I learned a great deal about the Sea Fury from this book, and it is indeed one interesting and consequential airplane.  The graphic design and layout of the volume is excellent, and the every single one of the pictures was carefully chosen for its quality, informational content, and equal appeal to the historian, aviation enthusiast, and scale modeler alike.  In other words, even though it’s not the longest of the SAM publications, you’ll find this book to be a visual treatise on the Sea Fury matched by an excellent and informative text.  It is a “must-have” for all fans of the Sea Fury, postwar aviation, and British aviation.  It is also unquestionably an invaluable reference to any scale modeler building any kit of the Sea Fury.