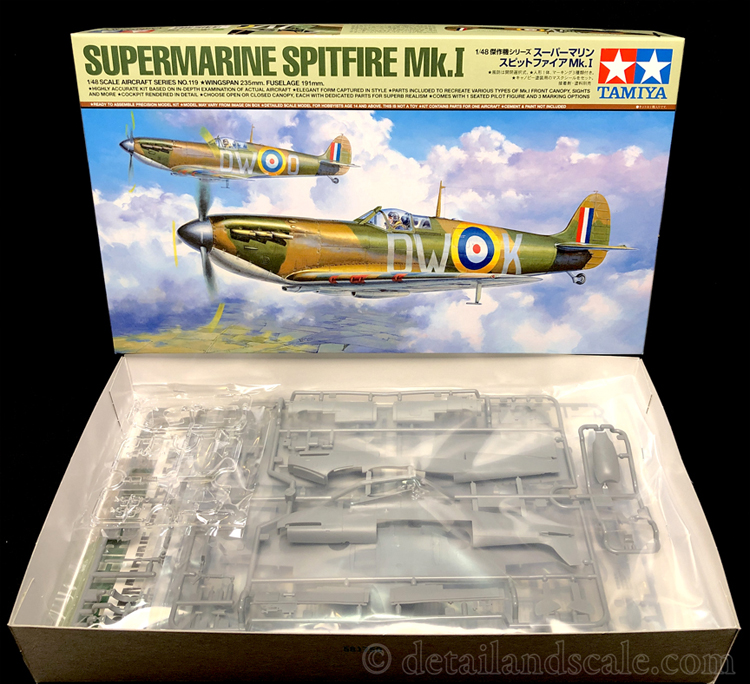 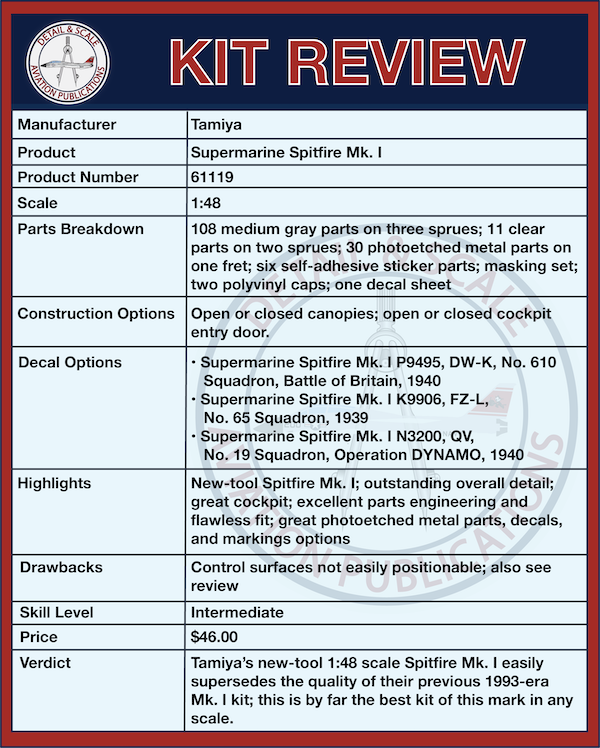 The Supermarine Spitfire took many forms and was produced over many legendary variants, but it all started with the Mk. I.  The Spitfire Mk. I was the pioneer and set the operational standard upon which all future Spitfires would progressively emerge.  In late 2018, Tamiya released a new-tool Spitfire Mk. I.  We recently received a review sample, so let’s check it out.

Supermarine’s production capability was initially not able to handle production of a new airplane, and it was delayed to the point that the first production Spitfire Mk. I took flight nearly two years later in 1938.  It was indeed was a promising aircraft.  The Spitfire Mk. I was quite agile.  It could hit a maximum speed of 362 mph and climb at nearly 2,500 feet per minute until reaching a service ceiling of 31,000 feet.  They were powered by the 1,030 hp Merlin Mk. II engine, until the Merlin Mk. III was introduced with the 175th production airframe.  The first 77 Mk. Is had a two-bladed wooden prop that was superseded by a larger three-bladed propeller that notably improved take-off performance, maximum speed, and ceiling.  A blown canopy replaced the original flat canopy in 1939 to improve visibility.  Beyond these, many dozens of additional small and incremental changes (“fine-tuning”) were implemented over the course of Mk. I production and service lifetime.  A total of 1,567 Mk. Is were produced.

The Spitfire Mk. I achieved operational status with 19 Squadron at RAF Duxford on 4 August 1938.  It was a front-line combat aircraft for a mere 18 months before being replaced by the much-improved Spitfire Mk. V.  Yet, in that time, the Spitfire Mk. I contributed invaluably to the war.  Its first encounters with the Luftwaffe was at Dunkirk and demonstrated that the fearsome Bf 109 had finally met its match.  During the Battle of Britain, Spitfire Mk. Is famously defended Great Britain alongside the Hawker Hurricane and ultimately repelled the Nazi onslaught above England.

Tamiya’s new Spitfire Mk. I kit contains 108 medium gray injection-molded parts on three sprues, 11 clear parts on one clear sprue, 30 photoetched metal parts on one fret, a small sheet of six self-adhesive sticker parts, a self-adhesive masking set, two poly-caps, and one decal sheet.  The 11-page instruction manual guides the build and is accompanied by a multilingual “Background Information” guide and a full-color painting and markings guide.  Markings are provided for three Spitfire Mk. Is:

Strengths:  Tamiya’s reputation as an inspired (and inspiring) kit-maker never ceases to impress the scale modeling world, and this new-tool Spitfire is really outstanding.  I remember in 1993 when their original 1:48 scale Mk. I came out, and it was quite impressive then.  This kit is a completely new-tool and is a testament to the advances in Tamiya’s kit design and production since the early 1990s.

This new Spitfire is relatively simple and should be quick to build.  Molding quality is arguably the best in the industry, from the wings and fuselage to the smallest detail parts.  The quality of surface details are just perfection.  There’s a combination of beautiful recessed and raised details (raised details where they SHOULD be) that are a treat to look at and will be very nice to work with.  Fabric covered control surfaces display a slightly more roughened texture.  The clear parts possess exquisite optical quality.  I’d be almost afraid to treat them with the customary dip in Johnsons/Future floor wax.  The masking set for the clear parts is also a very nice, time-saving touch that will ensure precise masking where its most needed.

Sprue attachments to parts are really very fine across all these three sprues.  Surely, the parts breakdown could be considered “traditional” with right and left fuselage halves and upper and lower wing halves.  Yet, the clever ways that the cockpit builds up and integrates into the fuselage, and the completed wing assembly clicks into the completed fuselage assembly is very neat.  I most like the one-piece main landing gear assembly (most of it winds up hidden inside the completed model) that ensures that your left and right landing gear angle and height are perfectly equal.  So cool!

The cockpit is really well done and is a distinct highlight of this kit.  It includes a great looking pilot seat , sidewalls, bulkhead frames, gunsight, control stick, throttle, trim wheel floor, and restraints.  Decals are provided for the instrument dial faces.  Regular readers will know that this reviewer advocates for the use of photoetched metal parts for shoulder harnesses and lap belts if the builder is interested in making the most realistic replicas of such 1:1 scale items.  Especially here with the Spitfire Mk. I, the shoulder harnesses drape down and forward and onto the seat back from where they are secured to the aft cockpit bulkhead.  The photoetched metal parts in the kit are perfect for this task, and they will look great when installed.  Tamiya also seems to have included an extra, backup pair of harness parts.  There’s also a pilot figure and he has a high degree of detail for an injection-molded figure.

The kit has parts that allow for an open or closed canopy and cockpit door.  Other details, from the engine exhaust stacks, main landing gear wells, radiators, air intakes, antennas, and tailwheel all look great.  These details are supplemented by other photoetched parts (grills and screens).  As noted above, there were various subtle differences among Spitfire Mk. Is depending upon the point they emerged from the production line.  Here, pay attention to the fact that parts such as the antenna masts and pitot configuration vary depending on your choice of markings options.  I also dry-fit all of the major assemblies.  This thing is airtight.  It fits perfectly.  It’s a Tamiya kit.

Speaking of markings options: while there are only three schemes in the kit, they are all great, from a notable participant in the Battle of Britain, to a pre-war aircraft and the Operation DYNAMO Spit at Dunkirk with the undersides of the wings painted in black-and white identification markings.  The decals are printed in perfect register.  Colors look great, and carrier film is very restrained.

Weaknesses:  Only three points of minor critique can be entertained here.  First, there are no raised instrument dial details for the detail painter to work with (and that point, frankly, boils down to builder preference).  Second – while molded with great details, the pose of the pilot figure reminds me of some 1970s Monogram pilot figures: the Tamiya Spitfire Mk. I driver is sitting there with his hands resting on the tops of his legs, gazing forward towards the instrument panel with an expressionless look on his face.  Maybe he’s being philosophical, taking a moment to think about things…but he ain’t flying an airplane.  Third, while the control surfaces are separate parts, they are designed to go straight in (positioned in the neutral).  If one wanted to drop of deflect the ailerons, rudder, or elevators, some modification work will be required.

Tamiya has brought forth another outstanding Spitfire kit, joining their early 1:48 scale and later 1:32 kit lineages of this legendary British fighter.  Their new-tool 1:48 scale Spitfire Mk. I easily supersede their 1993-era Mk. I kit as the best kit of this mark in any scale.  And while this is an “in-the-box” review, I know several very discerning scale modelers who have built this kit.  They universally praise the kit and had a great experience building it.  Bottom line – Tamiya’s Spitfire Mk. I is a beauty and has a lot of appeal to a wide range of scale modelers, from hardcore fans of RAF subject matter and WWII more broadly to builders of many different interests and genres.

Many sincere thanks are owed to Tamiya America and George Canare for their generosity in sharing this review sample with us.  You can find them on the web at https://www.facebook.com/TamiyaUSA and on the web at www.tamiyausa.com.