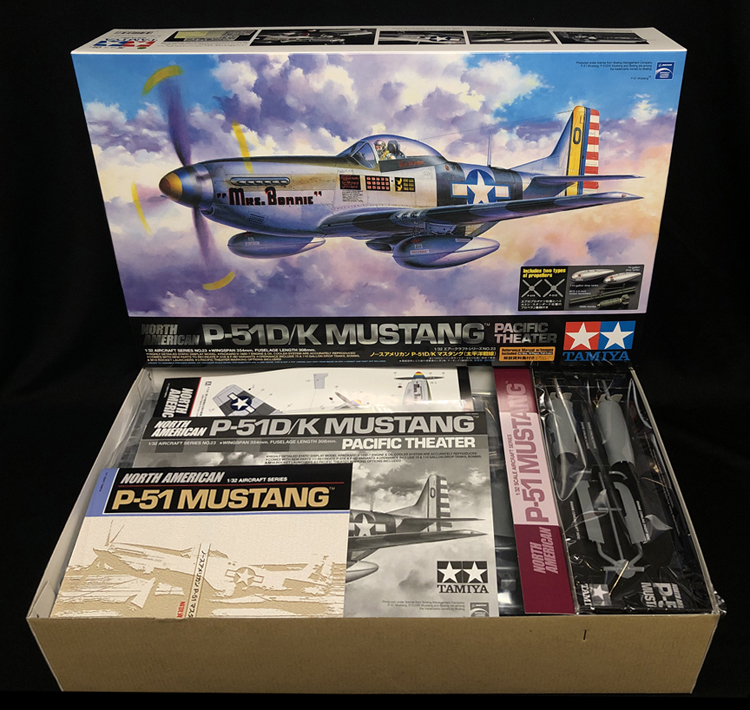 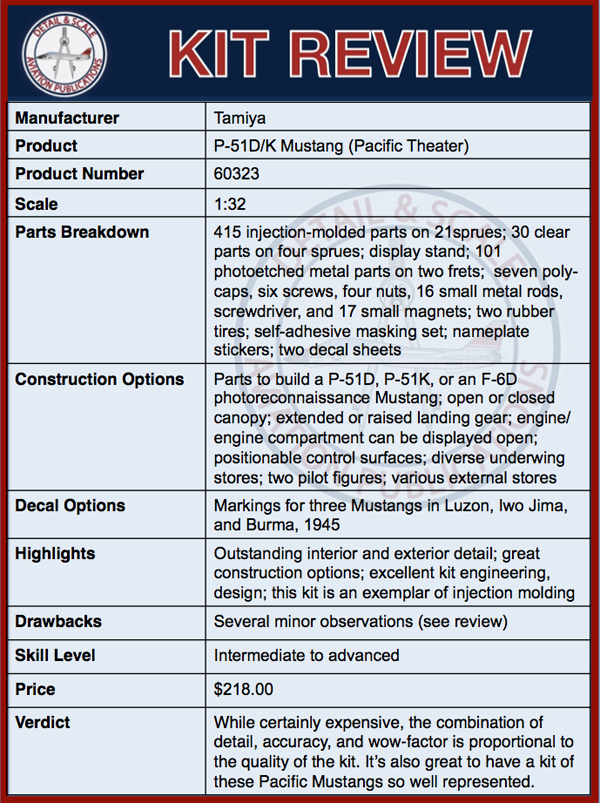 The P-51 Mustang is one of the most famous aircraft of all time.  It was the highest-scoring Allied aircraft of WWII.  Mustangs are forever linked to the defense of Allied bomber formations and ground attack missions that contributed to the collapse of Hitler’s Germany.  However, P-51s also served with somewhat less celebrity in the Pacific theater of operations.  Mustangs were relative latecomers to the air war in the Far East.  In 2011, Tamiya released their first 1:32 scale P-51D, and in 2012, it was followed by a P-51D/K with markings for the Pacific theater.  While it’s been out for a while, let’s sit down with the Pacific Theater edition of Tamiya’s Mustang.

The NA-73X first flew on 26 October 1940.  It incorporated a revolutionary laminar flow airfoil wing derived from NACA flight test data and an innovative under-fuselage ducted engine cooling system.  Mustangs were very fast, maneuverable, and well-armed.  Early versions entered production in May 1941 and went into combat with the RAF 11 months later.  These were powered by Allison engines and were typically equipped with two .50-calibre nose-mounted and four .30-calibre wing-mounted machine guns.  The 1,100hp Allison V-1710-39 powerplant provided impressive performance, but only up to about 15,000 feet.  RAF Mustang Marks I and II were soon followed by the improved P-51As, Bs, and Cs operated by the USAAF and the RAF.  British experimentation with the supercharged Merlin powerplant’s provided for outstanding high-altitude performance, and by mid-1943, Packard-built Merlin engines became standard for new build P-51s.

The definitive P-51D variant was fitted with a Plexiglas bubble canopy providing excellent 360-degree visibility, and the aircraft could reach around 440 MPH while its service ceiling was just shy of 42,000 feet.  Armament consisted of six wing-mounted .50-caliber machine guns while underwing pylons permitted the use of range-extending drop tanks, along with rockets and bombs.

During WWII, P-51s saw action in the European, North African, Mediterranean, and Pacific theaters.  Mustangs claimed 4,950 air-to-air kills.  In USAAF service, P-51s, with their very long range, escorted bomber formations over Europe beginning in 1943.  Mustangs were used increasingly as ground attack aircraft as well, especially in support of the allied ground offensive as Nazi forces were systematically pushed back into Germany.

Once Allied air operations began on Iwo Jima and Okinawa after they had been taken in the Pacific, the Mustang became relevant in the offensive against Japan.  From those locations, P-51s had the range to reach the Japanese home islands.  The first of the “very long range” P-51s were deployed in the Far East later in 1944, operating in close-support and long-endurance bomber escort missions.  Photo reconnaissance P-51Ds, designated as the F-6D Mustang, also started to play increasingly significant roles.  In 1945, Mustangs appeared over mainland China with the Chinese Nationalist air force.  In all, Mustangs accounted for only 221 Japanese kills, partly because their forces had already endured massive attrition by that point in the war.

Strengths:  This kit is based directly on Tamiya’s first 1:32 scale P-51D release.  Tamiya’s Mustang family was a signature achievement of plastic model kit design and manufacturing when it emerged eight years ago, and it remains so in 2020.  These are, without any doubt, the best Mustangs in this scale.

A lot has been said about Tamiya’s big Mustang and arguably, it is pretty well known.  Still, this edition of the kit has several new features beyond the subject matter on the decal sheet.  For one, there are parts to build a P-51K or an F-6D.  The P-51K was a -D model produced by the Dallas factory with the Aeroproducts propeller and spinner.  The optional camera windows and other features of the F-6D recce Mustang (e.g., antennas cockpit camera controls, and several other very subtle items) appear to be very faithfully executed here.  It is gratifying to see these lesser-known P-51 variants get such excellent attention in a kit.

The kit itself is exquisite in its recessed panel and rivet details (though, do see below).  While complex, overall kit engineering is smart so that it builds easily and fits virtually perfectly.  The details and building options are breathtaking.  The detail in the cockpit is simply stunning for an injection-molded kit.  Normally, my go-to is some aftermarket resin cockpit, but here, you don’t really need one.  From the instrument panel to the cockpit sidewalls, the radio set, decal cockpit data placards, gunsight, and photoetched metal shoulder harnesses and lap belts, it is hard to do better than this.  An optional seated pilot figure is included, along with a standing pilot figure wearing a leather jacket and a service cap.  The clear parts possess beyond-perfect optical quality, and there’s an extended fairing around the windscreen to make gluing and painting all that much easier.

The kit also contains a complete Packard Merlin engine and all the associated gear (coolant tank, oil tank, carburetor and carburetor intake duct, various pipes, the engine oil filter, the supercharger, and intercooler assembly).  As noted earlier, the kit also provides the Aeroproducts prop for the P-51K and Hamilton Standard propeller blades for the P-51D and F-6D.  Overall, this scale engine does justice to the great Merlin, and it makes this scale modeler’s heart go pitter-patter.  There are also with two types of exhaust stacks in the kit, and here, you go with the shrouded stacks.  Also, the single piece upper engine cowling is positionable, with magnets that allow it to be both fixed to the model and removable.

All of the control surfaces (ailerons, landing flaps, rudder, and elevators) are separate, moveable parts, as is the radiator exhaust door.  The main gear wells are really outstanding (though see below) and all that’s missing is some plumbing.  Many manufacturers have failed to capture the correct contour and shape of the wells, but Tamiya nailed it here.  The main gear are also rich with detail and feature separate brake lines and photoetched landing gear linkages.  The same attention and fidelity of detail is present in the tail wheel well and tail wheel.  There are also option parts to build the Mustang with its gear up, and hence, the inclusion of the display stand.

In terms of armament, the kit provides optional closed or open left and right gun bays.  If displayed open, you can show off the six .50-caliber machine guns and very nicely detailed ammo belts feeding the guns.  The wrap-around gun port insert ensures that there will be no seams splitting the gun barrels in half (very thoughtful from a design point-of-view).  Underwing stores provide several options, from 110-gallon and 75-gallon metal drop tanks to two M10 rocket launchers, and two 500-pound bombs.

While the masking set is not pre-cut, it will still save scale modelers a lot of time making their own.  The markings options are really impressive with well-chosen markings.  The colors on “Mrs. Bonnie” make that scheme impossible to pass up, at least for me.  The decals look great in terms of quality, register, color, and all other technical attributes.

Weaknesses:  While exceptional, Tamiya’s Pacific Theater Mustang kit is not perfect.  It sure does get close, but a few things are worth noting.  First, the extensive rivet detail atop the wings is technically inaccurate for an operational Mustang.  To achieve laminar flow, most of the rivets and panel lines on the wings were filled with putty at the factory and then covered in silver paint.  The kit has all the wing rivets properly represented in a manner that could be called the “inside-the-factory” appearance.  The one saving grace is that these rivets are quite shallow and fine (unlike what can be seen in the Dragon kit).  A little bit of Mr. Surfacer and some light sanding should make them go away as Mustang aerodynamics intended.  It’s rare to say a kit has too much detail, but this is indeed the case here.

Be vigilant for some poorly-placed ejection pin markings on surfaces inside the main gear well, gun bay access panel, and several other areas of the kit.  Some of these will be more aggravating to remove than others.  I can’t say that I’m a fan (ever) of rubber tires for a model kit.  It’s basically impossible to remove the molding seam separating the tire halves, and they break down over time.  For replacements, I highly recommend the cast resin P-51 wheels produced by Barracuda Studios (https://www.barracudacals.com).  While mentioned earlier that the clear parts are optically flawless, the seam going down the midline of the canopy will require messing with that optical quality, sanding it down and buffing it back into a crystal-clear state.

Tamiya’s 1:32 scale P-51D/K Mustang (Pacific Theater) kit is a modern classic.  The combination of detail, accuracy, and pure allure is impossible to beat.  It’s also great to be able to build a large-scale P-51K and F-6D.  While this kit is expensive, the price is proportional to its quality.  Still, shop around, as some retailers are selling it below its MSRP.  Enjoy this kit – it’s is indeed something special for Mustang fans and extends an invitation to a very wide range of scale modelers.

Sincere thanks are owed to Fred Medel and George Canare at Tamiya America for their generosity in sharing this review sample with us.  You can find them on the web at https://www.facebook.com/TamiyaUSA on the web at www.tamiyausa.com.