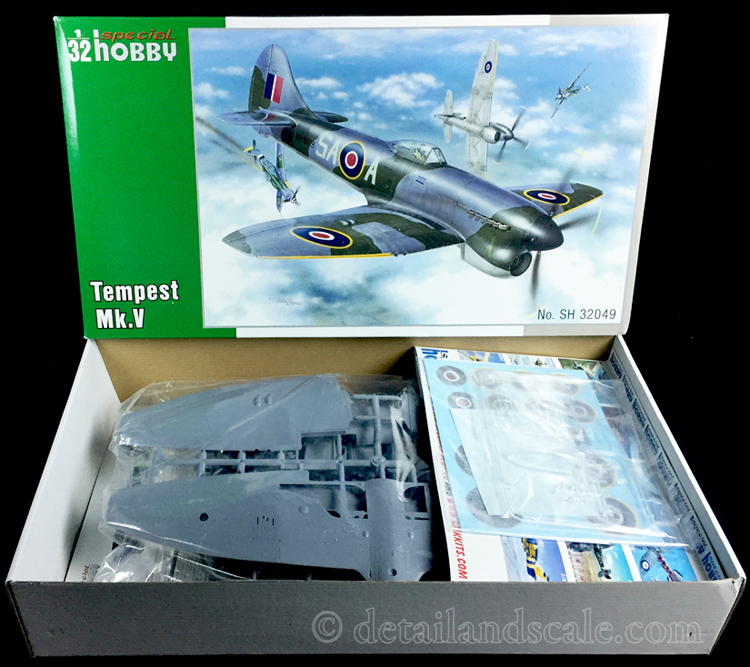 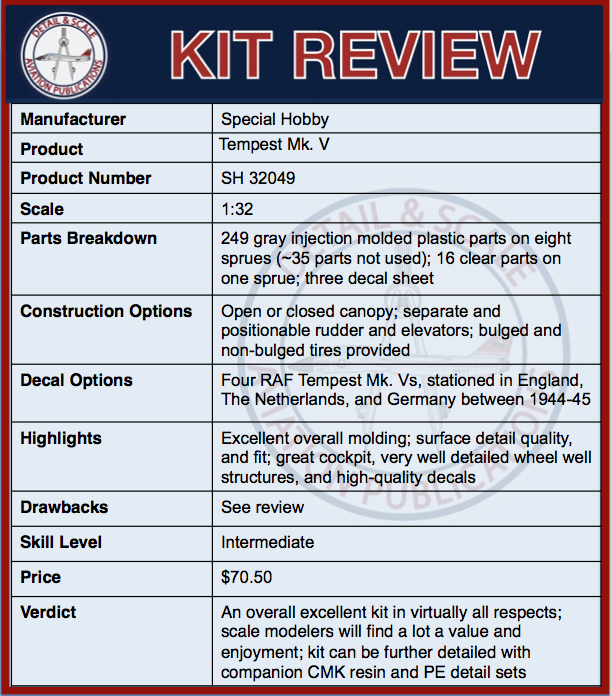 In the latter part of the Second World War, the British developed one of the fastest and most lethal airplanes of the war: the Hawker Tempest.  Originally starting out on paper as an improved version of the Hawker Typhoon, the design evolved into a significantly new airplane, capable to taking on any German target, from the V-1 buzz bomb to armored trains, tanks, and the Me 262 jet fighter. Special Hobby finally released its 1:32 Tempest Mk. V in 2016. It just arrived on our review bench, and here, we’ll take a look at this long-awaited injection molded kit.

The Hawker Typhoon was one of the RAF’s most famous airplanes during WWII but it had some limitations.  The Typhoon’s performance was particularly poor at both high altitude and high airspeeds. Engine troubles and structural flaws also plagued the Typhoon. Hawker engineers, led by Sydney Camm, developed a Typhoon variant in 1941 that incorporated a thinner, laminar flow wing design that was first known as the Hawker P. 1012 or Typhoon II. The wing was redesigned into a near-elliptical shape with a 43 foot span and wing surfaces were very purposefully flush-riveted to optimize laminar flow. The wing also was designed to incorporate 800 rounds of 20 mm ammunition for four Hispano cannons. Additional internal fuel tanks were added to bring internal fuel capacity to 162 gallons. The heart of the new deign was the powerful Napier Sabre IV powerplant.  The accumulated changes prompted a new name for the new design, and the Typhoon II became the Tempest.

Six prototype Tempests were built as a single Mk.I, two Mk.IIs, one Mk. III, one Mk.IV, and one Mk.V variant.  Each example featured a range of different airframe and powerplant configurations. Delays with the other prototypes saw the Mk.V take to the air first in September 1942. Tempest flight tests validated the new design than indeed overcame the Typhoon’s performance shortcomings. By 1943, a production line for the Tempest V was established in Hawker’s Langley facility, alongside the Hawker Hurricane. Low rate initial production fed airplanes into extensive service trials at Boscombe Down using the early Tempests. By April 1944, the Tempest was ready for combat.

The RAF knew it had on its hands one of the most powerful fighters of its day. From about 10,000 feet down to the deck, the Tempest was fastest low-altitude propeller-driven aircraft of the war. Tempests soon flew fighter sweeps and reconnaissance missions. Leading up to D-Day, Tempests frequently flew into northern France, Holland, and the Netherlands to attack German airfields, radar installations, ground vehicles, coastal shipping, and “vengeance-weapon” launch sites. Further, the high-speed performance of the Tempest made it an excellent interceptor of the V-1. Tempests brought down no less than 638 V-1s inbound to England. In September 1944, Tempests supported Operation MARKET GARDEN and by the end of that year, their missions were generally focused on systematic destruction of northern German railways. By 1945, the Tempest’s speed and tactics had begun to accumulate kills against the Me 262, and by the end of the war, the airplane had accumulated an overall kill-to-loss ratio of 6.5 to 1.  Indeed, what had started out as a redesign of the Hawker Typhoon lead to an airplane that produced a definitive contribution to close the Second World War in Europe.

Special Hobby’s 1:32 scale Tempest Mk. V is an injection molded plastic model kit. It contains 249 medium gray parts distributed across eight sprues (approximately 35 parts will go unused) along with an additional 16 clear parts on one sprue. Also included in the box is the color instruction booklet which assembly of the Tempest Mk. V proceeding over 46 steps. Markings are provided for four aircraft:

Strengths:  Over the years, Special Hobby has been steadily improving their game in terms of molding quality, detail, and fit. They began some years ago producing limited run injection molded kits known for monstrous pour gates leading to even the smallest of parts, uneven detail, sometimes questionable parts fits, and irregular or “pebbly” airframe surfaces. If it’s been a while since you looked at a Special Hobby offering, this kit of the Tempest Mk. V truly shows how far Special Hobby has come. This kit is on par with any high-quality modern manufacturer, and I would probably draw the closest comparison with Hasegawa and their peers. Overall size and shapes appear to be very accurate. The surface airframe detail is excellent, featuring crisp and restrained panel lines. Recessed screw, rivet, and fastener detail is likewise very well executed, and also captures the details of the different sized and shaped fasteners on the engine cowling and wing roots.  The rudder and elevators are separate parts and can be positioned deflected though the instructions only show them to be placed in the neutral position.

The kit also comes with a pair of drop tanks and two air-to-ground bombs, though only limited number of Tempests carried air-to-ground munitions during the war. Should you choose to hang anything off your Tempest, to pay attention to the holes that will need to be drilled from the inside of the lower wing half to mount the pylons. Also, two styles tires – bulged and flattened and non-bulged tires – are also provided. I also like the internal propeller hub plate that helps one align the props correctly. I snipped off the fuselage, wings, and tail parts for a test fit.  Everything fits very precisely, and you’ll not likely need much filler here. Also, the full-span wings allow the builder to achieve the proper dihedral angle literally right out of the box.

The cockpit is outstanding. The level of detail and intricacy that is provided translates into the potential for most scale modelers to produce a small masterpiece here. The detail provided just by the kit is excellent, and one can tell the thinking that went into the parts breakdown, from the control column to the throttle, rudder pedals, seat, and surrounding airframe structure was very careful indeed.  To be clear and expose my personal bias, I love using aftermarket parts – as a builder, resin and photoetch is a big part of my enjoyment of the hobby. But there’s not much need here for anything else because the kit parts are just that good. Instrument bezels look great, but there no detail on the instrument faces, as they are to be represented by very nicely detailed decals.

I would almost always opt to use a photoetch metal part to represent the face of the big radiator under the nose. Here, the molding is so finely executed that aftermarket parts aren’t necessary to achieve the greatest degree of detail possible. The engine exhaust stacks also amuse me.  They are divided into an upper an lower half with a hollowed out end (nice!), and the parts come together exactly where there was a physical weld line on the real thing. For their assembly, I would not use any regular cement or superglue, but Tenax 7R, Ambroid ProWeld, Tamiya liquid cement, or something similar to melt (or weld) these exhaust stacks together.

In a similar fashion to the cockpit, scale modelers will also be very impressed by the fidelity of detail in the main gear and tail wheel wells and gear doors. The structures of the main gear wells appear to be very well represented, only lacking wire bundles or plumbing. The main gear themselves and their retraction cylinders and other struts are very nicely detailed and crisply molded. Further, ejection pin marks are nowhere to be seen. Bravo! Other smaller details are to be commended, too, including the exterior lights and very nicely printed decals that represent the straps on the drop tank pylons.  And speaking of the decals, the markings were printed by Eduard. Their colors are accurate, vibrant, and in perfect register. Carrier film is thin and quite well restrained. The print fidelity, including for the finest airframe stencils, is excellent. I also like the choice of schemes represented here, and the two that feature invasion stripes are particularly appealing.

Weaknesses:  There’s only a few critiques that I think can be entertained for this kit. The pour gates are still a bit large proportionally speaking, and for almost every part, a few moments of extra clean-up will probably be necessary. While the rudder and elevators are separate pieces and can be positioned, the flaps and ailerons are integrally molded into the trailing edges of the wings. There are no shoulder harnesses and lap belts for the seat, and the tires are basic, lacking sidewall grooves and the Dunlop imprimatur. Of course, these last two omissions were probably purposeful, as CMK (the sister company of Special Hobby) already produce resin sets that include these details.

Special Hobby’s 1:32 scale Tempest Mk. V appears to be an excellent injection molded kit in all respects.  I’m quite impressed, and I think most scale modelers will find a lot a value and enjoyment here, too.  For those interested in upgrading the kit even further, there are already a wide range of detail parts from CMK for this kit spanning the exhaust stacks to the control column, gun sights, and even sitting and a climbing pilot figures. Eduard, Barracuda, and Quickboost produce additional detail parts, too. Further, another edition of this kit, Special Hobby 32052, is the “High-Tech” offering that has a lot of the CMK resin and photoetch in the box with an additional set of five markings.   If one “reads the sprues” and looks at the tooling, it suggests Special Hobby is thinking about producing a Mk. II at some point, and this will most certainly be a highly anticipated release as well.