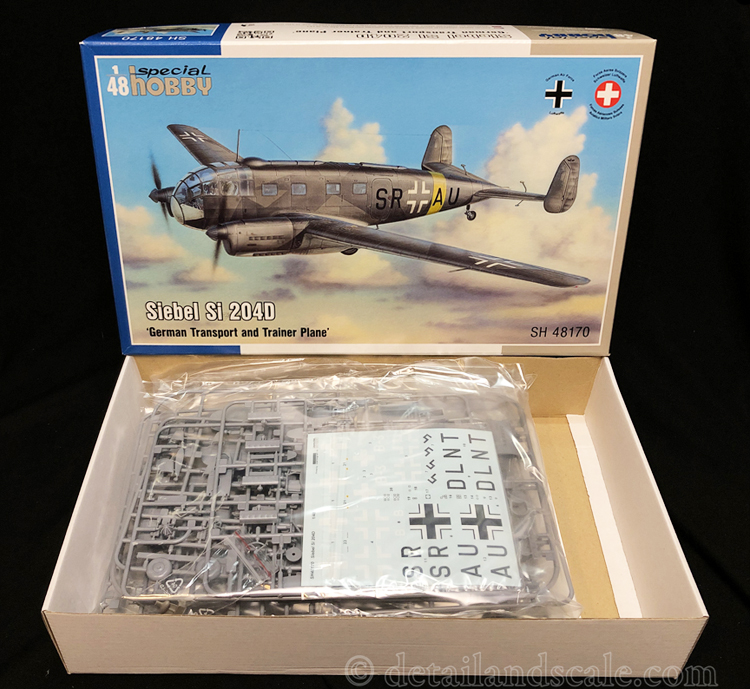 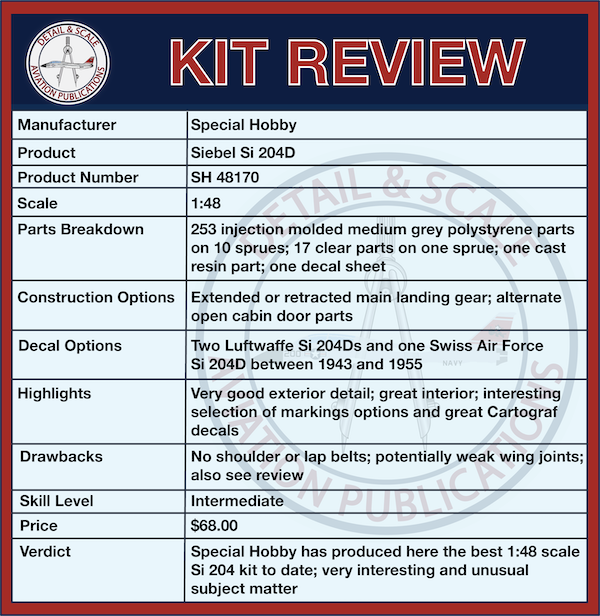 One of the more obscure Luftwaffe aircraft during WWII was the Siebel Si 204 – a twin engine light transport.  A little more than 1,200 were built, and they served mostly in training and mobility roles.  There have been a number of 1:72 scale kits of the Si 204, and they have been mostly limited-run, lower-quality offerings.  In 2019, Special Hobby released a pair of definitive 1:48 scale Si 204 kits, and here, we sit down with their Si 204D.

The Siebel Si 204 started out life as a small, all-metal civilian passenger plane with room for two pilots and eight passengers.  It was based on the Siebel Fh 104 Hallore which dated back to a 1934 design and bore a very strong resemblance to the Beechcraft Model 18.  As WWII loomed, the Luftwaffe began to acquire Si 204s as a trainer with a full “stepless” glass cockpit so as to assist in the training of bomber and transport crews.  This major change in the nose design made the Si 204 resemble a mutant – something akin to the front end of an He 111P or Ju 88A grafted onto a much smaller airframe.  Si 204 production occurred at several different sites across Germany, France, and Czechoslovakia.  Total wartime production reached 1,216 airframes by early 1945.  Yet, postwar production resumed and continued with Aero Vodochody into 1949 for civilian market customers.  Captured Si 204s flew with the Soviets in diverse roles, from Aeroflot to the Tajikistan Regional Air Services and the Soviet Ministry of Agriculture into the early 1950s.  Modified versions served as light bombers with the Czechoslovakian Air Force into the mid-1950s.

During WWII, the Si 204 had a reputation for being very mechanically reliable and a pilot’s airplane, though it cruised only at 210 MPH and had a service ceiling of 24,000 feet.  It was often used to ferry senior officers and train aspiring Luftwaffe pilots in their -B and -C School syllabi.  The Si 204D was an instrument flying trainer developed by ČKD (BMM) in the Protectorate of Bohemia and Moravia and different variants were produced in at least three different plants in Europe.  The first D-0 prototype aircraft was delivered in January 1943.  D-1 variants were produced by Aero Vodochody and BMM.  D-3 aircraft saw a major production change as they were built with wooden wings and tails in an effort to consume less aluminum.  The last German loss of the war was likely a Si 204, downed by a P-38 Lightning over Bavaria.

Special Hobby’s 1:48 scale Siebel Si 204D kit consists of 253 injection molded medium grey polystyrene parts on 10 sprues, 17 clear parts on one sprue, and one resin part.  However, on this version of the Si 204D, only about 230 parts get used in this build.  The full color instruction booklet guides assembly over 87 steps.  Decals provide markings for three aircraft:

Strengths:  Special Hobby continues to be hitting a lot of the right notes.  Their design work keeps improving, the quality of molding just keeps getting better, and they are producing interesting and unique subjects.  No one here can lament, “Oh, not another -109!”  The Si 204 indeed was a unique, rather unusual looking, and underrepresented subject for scale modelers.  All these factors will make Special Hobby’s 1:48 scale Si 204D intriguing to a lot of folks.

The kit features recessed panel lines and rivets.  Fabric control surfaces have their own distinct, slightly roughened texture, different than the rest of the skin of the plane.  The parts breakdown is rather straightforward and this should be a relatively simple, hassle-free build.  Most of your time, however, will be spent on the interior.

This kit might possess one of the best interiors that I’ve seen Special Hobby produce.  There’s a lot of detail, and most of the parts go into the cockpit, radio operator’s station, and cabin.  There’s a lot going on here, from highly detailed cabin floor and ceiling parts (both arranged to hide the upper and lower centerline fuselage seams), seat, seat frames, radio stacks, breathing oxygen bottles, and more.  It’s quite engrossing!  Not only is there a lot of places to look in, both fuselage doors can be displayed open – though you’ll have to cut out the originals from the fuselage and replace them with the doors provided on the sprues.  The instrument panels have raised relief, but decals are intended to represent all the instrument panel dials.  The landing gear and gear wells are also quite well done for injection molded parts.  The all-important clear parts are very well done but could use some additional polishing to make them look even better.

The choice in paint schemes here are quite interesting, from a fairly standard mid-war trainer to a transport (DL+NT) that had Luftwaffe markings removed in May 1945 as it flew the Grand Mufti of Jerusalem to Switzerland seeking asylum.  As a Nazi collaborator and war criminal, his appeal was denied and he was taken into custody while the airplane was seized.  The third scheme in the kit is DL+NT in postwar Swiss AF markings.  The decals were printed by Cartograf and are exceptional, from their solid colors, great print quality, and highly restrained carrier film.

Weaknesses:  This kit has a few weak spots to consider.  There are no shoulder harnesses and lap belts on any of the seats.  The wings attach to the fuselage via a single short mounting stub and gives off the vibe that it would be pretty weak.  I’d make sure to use some very strong glue here.  The engine exhaust stacks are flat-ended and would look a lot better if drilled out, but these have squared-off ends such that a regular pin vice would not really work.

Each fuselage side window is a separate part, and fitting them, eliminating seams, masking, and painting would likely be a bit of a tricky task.  Obviously, here, follow the instructions and get that all done before the fuselage halves go together.  There’s some ill-placed ejection pin markings on the inside of the fuselage that will require elimination.  Some of the pour gates that attach parts (even small parts) to the sprues are pretty large, so use care when separating parts and cleaning them up.

Special Hobby’s 1:48 scale Si 204D has a ton of potential.  It receives strong marks in overall quality, design and parts breakdown, interior detail, and decals/paint scheme options.  CMK also offers some cast resin upgrade parts such as seats, prop spinners, and wheels.  Yet, I would have to say Eduard took it to the house with their photoetched metal detail sets for the Special Hobby Si 204D.  These include a great pre-painted seatbelt set, a pre-painted cockpit detail set, and an interior detail set.  They also produce a masking set – a major help with all that cockpit glazing.  Many builders will be drawn to using the various aftermarket detail sets to bring out even more the strengths of the kit which is, hands down, the best injection molded 1:48 scale Si 204 produced to date.

Sincere thanks are owed to Special Hobby for the review sample.  You visit them on the web at http://www.specialhobby.info and on Facebook at https://www.facebook.com/specialhobby.