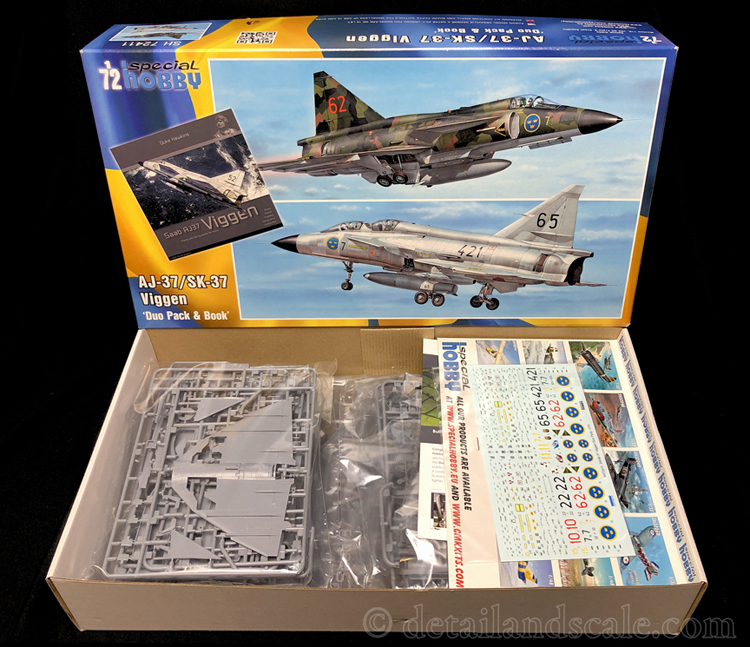 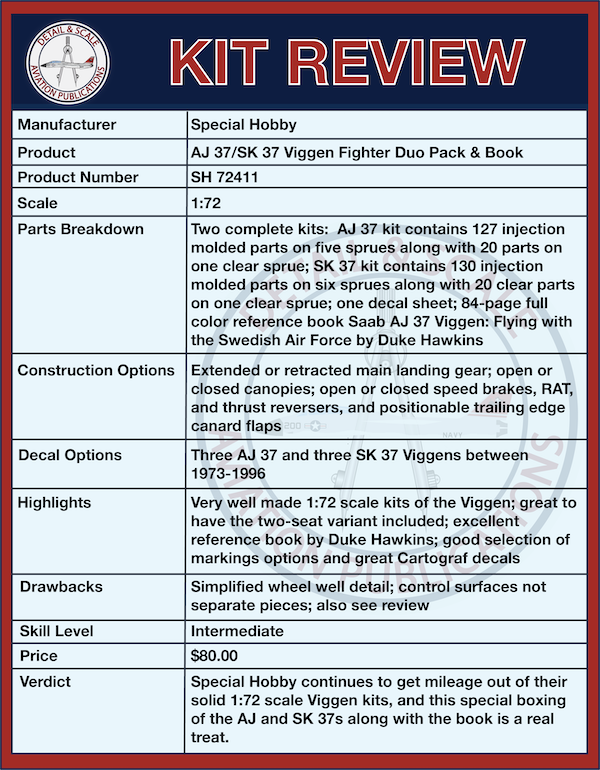 The AJ 37 Viggen was a single-engine multirole combat aircraft produced and flown by Sweden.  It featured a radical delta wing and forward mounted canards.  Viggens were at the forefront of deterrence in northern Europe for the second half of the Cold War.  In 2014, a collaboration between Tarangus and Special Hobby produced the first new tool 1:48 scale Viggen in decades and this has now been the basis of Special Hobby’s 1:72 scale kits of the aircraft as well.  Here, we take a look their special “Duo Pack and Book” set that contains two models – one each of the single seat AJ 37 and two-seat SK 37 – and a book on the Viggen by Duke Hawkins.

During the Cold War, Sweden was technically a neutral country but nonetheless was a frequent recipient of provocative Soviet actions.  If World War III ever erupted, Sweden knew it needed to maintain its readiness to defend against certain Russian attack.  Many incidents occurred between the two nations.  Sweden had fighters and fighter-bombers on five-minute alert and maintained constant radar surveillance of their airspace.  In 1955, the Saab Draken flew for the first time just as the Swedish Air Force (or Svenska Flygvapnet) was already considering requirements for its follow-on aircraft.  A series of studies between 1952 and 1955 explored some 100 different concepts for this new aircraft, each offering diverse solutions to meet the requirements of a platform with supersonic low dash, a top speed of Mach 2 at combat altitude, and the ability to make short landings at low angles of attack (anticipating most the their operations in WWIII would involve short, dispersed, and improvised runways).  In late 1961, Sweden’s defense establishment approved the design known as System 37 that would ultimately become the Viggen.  It became the largest and most expensive industrial effort in Swedish history.

Even today, the Viggen’s configuration is seen as unconventional.  It featured an aft-mounted double delta wing with small, high-set canards equipped with powered trailing flaps mounted ahead of and above the main wing.  The canards allowed the Viggen to balance STOL performance with stability at supersonic speeds at low altitudes.  A thrust reverser also allowed for the required short landing ability.  The Viggen’s powerplant was the Volvo RM8 afterburning turbofan, itself a heavily modified Pratt & Whitney JT8D built under license.

Work on the prototype started in 1964 and it first flew on schedule in February 1967.  By April 1968, the Swedish government formally issued the authorization for Viggen production.  In 1971, the first production AJ 37 aircraft flew, and the production run continued until the last of 329 jets was delivered in 1990.  More than 10 variants of the jet were produced, from the primary AJ 37 and JS 37 attack variants (with air-to-air combat as its secondary mission) to the smaller numbers of two-seat SK 37 trainers, recce, and electronic warfare versions.

Overall, the career of the Viggen was successful and distinguished and it thrived in its low-level, high-speed attack regime operating from improvised and decentralized operational subarctic settings.  Time and time again, they maintained the airspace around Sweden.  It was also successful in making ‘friendly’ intercepts of the SR-71 Blackbird as it overflew Sweden and reportedly was the only aircraft able to break the Blackbird’s powerful jamming and maintain a radar lock on the Mach 3+ black jet.  The Viggen’s safety and reliability record also exceeded expectations.  The Viggen continued on until 2005 when the last jet was retired as the Saab Grippen eclipsed the venerable Cold War warrior.

Special Hobby’s 1:72 scale duo combo set contains one kit of the single seat AJ 37 and one kit of the SK 37.  The AJ 37 kit contains 127 injection molded parts on five sprues along with 20 clear parts on one clear sprue.  The decal sheet provides markings for the following three airframes:

The kit of the two-seat SK 37 contains 130 injection molded parts on six sprues along with 20 clear parts on one clear sprue.  The decal sheet provides markings for the following three airframes:

Strengths:  The 1:72 scale Viggen from Tarangus/Special Hobby does not simply a represent purely scaled-down version of their 1:48 scale kits.  Instead, it is (logically) a simplification of the larger “template” of both the single and two-seat versions from which both kits draw upon.  If you have the 1:48 scale kits, you’ll see a very similar parts design and breakdown (such as the very nice single-piece upper nose and forward fuselage), but there are overall fewer parts and less complex assemblies in this kit.

Still, what’s here is very good for 1:72 scale.  Since both kits share about 98% of the same parts, the comments here apply to both of them.  The surface details are all really well engraved (though a bit simplified, considering the general lack of fastener and rivet details; the same shortcoming affects their 1:48 scale Viggens as well).  Full intake ducts are provided – a nice touch, especially for 1:72 scale.  There’s the option to build the canopies open or closed, upper and lower speed brakes extended or retracted, and the ram air turbine (RAT) deployed or retracted.  The engine exhaust petals can also be built open or closed.  The forward canard flaps can be glued in as either neutral or dropped.  Most of the time when the jet sat on the ground with the power off, these canard flaps were indeed dropped.  There are parts for two external fuel tanks.

The SK 37 features a new sprue (Sprue I) which contains a new forward upper fuselage half with the two cockpits.  Other parts in the kit not used in the single seat issue of the AJ 37 come into play here such as the additional cockpit tub, ejection seat, and canopy.

The markings options are great.  They span what I’d call ‘representative’ options for both jets: variations on the famous geometric disruptive camouflage scheme to earlier natural metal Viggens.  Cartograf printed the decals and they look great, as usual.  Lots of detailed maintenance stencils are also included.

Besides the bundled duo-kit combo, the other immense draw of this set is the book.  Duke Hawkins’s Saab AJ 37 Viggen: Flying with the Swedish Air Force is outstanding.  This is the HMH Publications volume that provides an exceptional scale modeler’s reference of the Viggen across the single- and two-seat variants (including the EW and recce versions).  The book is 84 pages long and contains over 200 photos.  Production quality is excellent.  Detailed reference images span cockpits, ejection seats, landing gear, gear wells, and external airframe details.  There is also a lot of really high-quality photography of the jet in action.  It is top-notch bravo-zulu work by Hawkins and HMH.

Weaknesses:  Only a few considerations here.  The surface details are a bit simplified as noted above, and gear well detail is again really pretty simple.  I also found myself wishing there were more external stores options in the box and the option of separate control surfaces (flaps, rudder).

Special Hobby continues to get mileage out of their solid 1:72 scale Viggen kits, and this special boxing of the AJ and SK 37s along with the book is a real treat.  It extends an invitation to a wide range of scale modelers, and for Viggen fans, this boxing is a “must-have.”  Of course, if you want to add even more detail, CMK (Special Hobby’s sister company) has a wide range of cast resin ejection seats, wheels, speed brakes, RAT, rocket pods, and pilot figures which have a lot to recommend to them – these are definitely better than the plastic kit parts.  Enjoy!

Sincere thanks are owed to Special Hobby for the review sample.  You visit them on the web at http://www.specialhobby.info and on Facebook at https://www.facebook.com/specialhobby.  The relative simplicity, nice detail, and outstanding markings options, I feel, really extends an invitation to a wide range of scale modelers.