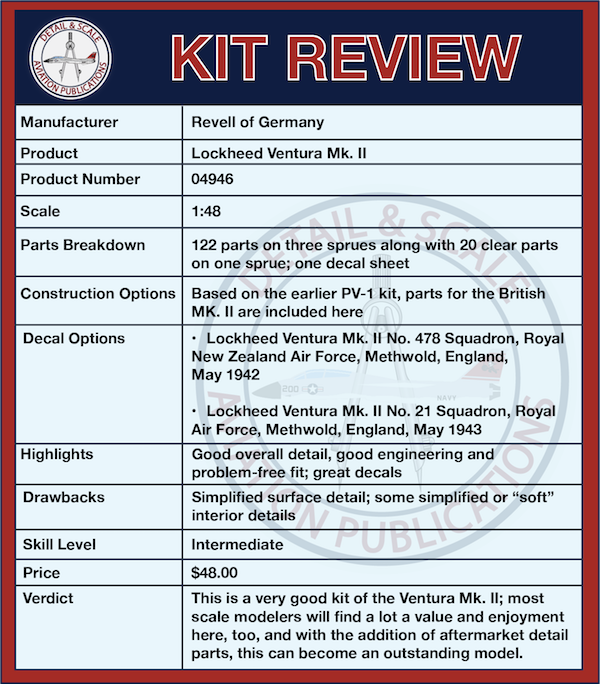 The Lockheed Ventura was one of the less-celebrated (but historically significant) Allied twin-engine medium bombers of World War II, contributing to various outcomes in the European and Pacific theaters.  In British service, Ventura Mk. IIs replaced Lockheed Hudson bombers and eventually became a prominent maritime patrol aircraft.  Following Revell’s success with their 1:48 scale PV-1 Ventura in U.S. Navy markings, Revell of Germany’s follow-on Ventura was the Mk. II variant in RAF markings that came out in 2016.  Here’s our take on this Ventura.

The Ventura was born out of a 1939 British Air Ministry proposal to Lockheed to develop an airplane that would replace the Lockheed Hudson in RAF service.  Lockheed’s response was a militarized version of the Model 18 Lodestar commercial transport.  The Ventura resembled the earlier Hudson, of course, but was larger, heavier, and more powerful.  The internal bomb load was increased to 2,500 lbs.  The top turret, fitted with 0.303 machine guns, was moved forward of the Hudson’s top turret location to confer a greater field of fire.  Additional 0.303s and 0.50 caliber guns were installed in the nose.  The Ventura was powered by a pair of 1,850 hp Pratt & Whitney S1A4-G Double Wasp 18-cylinder air-cooled radial engines.  The prototype first flew on 31 July 1941.  Development proceeded smoothly and quickly, and the first Ventura Mark I arrived in England in April 1942.

The Ventura Mk. II improved upon the original design as it was fitted with 2,000 hp Pratt & Whitney R-2800 powerplants and a new bomb bay that could carry either 3,000 pounds of bombs or a 780-gallon ferry tank.  A total of 487 aircraft were produced, but only 196 Ventura IIs made it to England, as the remainder were diverted to USAAF service.  England initially used the Ventura as a daylight bomber but it soon demonstrated significant vulnerability, particularly to Luftwaffe fighter attacks.  By 1943, Ventura losses were exceedingly high and it never gained much love among aircrews.  Though replaced on the front lines of the air war in Europe by the de Havilland Mosquito, the surviving Venturas still had quite a bit of life in them.  Many were transferred to Coastal Command.  So, while the Ventura Mk. II proved to be a relatively poor medium bomber, it did finally encounter its niche as a maritime patrol aircraft hunting U-boats and conducting anti-shipping, reconnaissance, and search-and-rescue duties around British coastal waters.

Revell of Germany’s 1:48 scale Lockheed Ventura Mk. II is an injection molded plastic model kit.  It contains 122 medium gray parts distributed across three big sprues along with an additional 20 clear parts on one sprue.  Also included in the box is the color instruction booklet that has the builder assembling their Ventura Mk. II across 50 steps.  Markings are provided for two aircraft:

Strengths:  Many readers may already be familiar with the PV-1 kit, and it has a well-earned reputation as a very well fitting, enjoyable, and straightforward build.  In other words, it’s a very solid modern kit.  This Ventura Mk. II shares approximately 90% of the same parts and its assembly should be as trouble-free as the PV-1.  The Mk. II specific parts, such as the nose windows and guns and the bigger bubble top turret appear to be very nicely represented and accurate.  Overall detail is strong.  The main gear well, bomb bay, main gear, and interior details are rather good for injection molding.  Hydraulic brake lines are molded onto the main gear themselves, and they are well-done.  The kit also comes with two 500-pound and four 250-pound bombs to hang from the racks in the bomb bay.  And even though I generally despise it when a double-row radial engine is molded as a single piece part, the engines in this kit pull it off convincingly well.  They are nicely detailed and achieve the proper appearance of depth and surface detail.  The clear parts are crystalline-clear.  Decal quality is also outstanding.

Snipping off the fuselage and wings from the sprues, I found my test fits really hitting the mark.  The fuselage comes together without a second effort.  Correct and easy alignment of the wings is facilitated by a big spar running through the fuselage and aligns the wings right up to the wing roots.  The tail assembly pops into the rear fuselage and holds the entire back end of the Ventura together.  Some good thinking regarding parts engineering is apparent here.

Weaknesses:  Most of my critiques of the kit are minor.  I really like this Ventura Mk. II, but there are some perceptible flaws.  First – the recessed panel lines are pretty nice, but there’s not a single, rivet, screw, or fastener represented on the entire exterior surface of the airplane.  Surface detail appears to have thusly been simplified.  I am personally deeply unimpressed by the molded-on seat belts, but for some scale modelers, they will be good enough.  Also, the instrument panel has dials with no faces, so the detail painter is out of luck, though the decal sheet does supply the appropriate instrument faces.  Further, there’s a lack of bulkheads, it would seem.  Looking behind the nose gunner/bombardier’s position, you’ll be able to catch a glimpse the unglamorous backside of all the cockpit parts, and the open door in the bulkhead behind the pilot leads to a whole lot’a nothing.  I’d suggest blanking off that bulkhead with some styrene sheet.  Quickboost and Vector offer replacement cowlings.  If there’s any shape error in the kit’s engine cowlings, it’s not readily apparent to me, though it might be worth a closer look.

Revell of Germany’s Ventura Mk. II is a very good kit of this historically notable airplane and should build up into a respectable model of this airplane.  I’m a fan, and I think most scale modelers will find a lot a value and enjoyment here, too.  For those interested in upgrading the kit even further, there’s a wide range of resin and photoetch details from multiple manufacturers spanning Eduard to Vector that one can choose from.