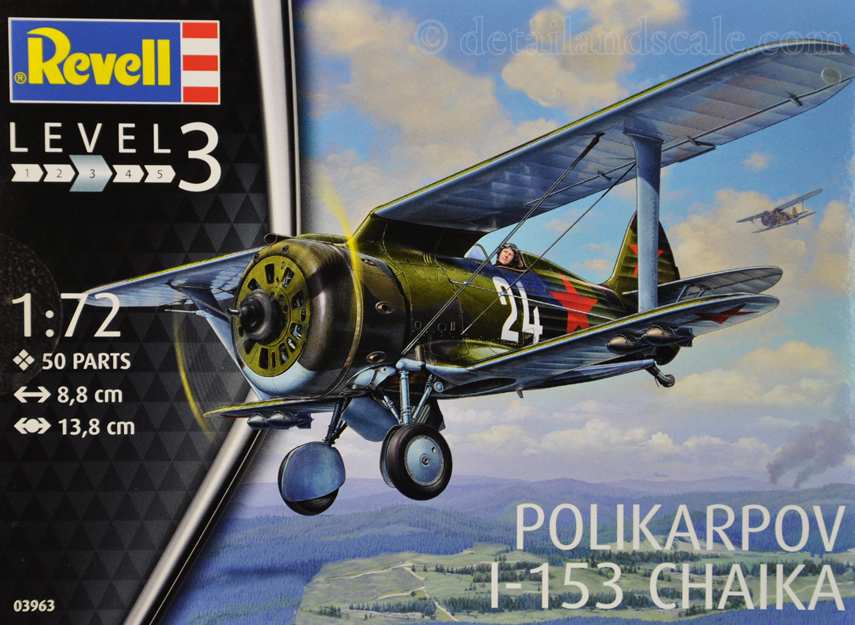 By the late 1930s, monoplane designs were maturing and rendering obsolete the concept of the biplane.  One of the last production combat airplanes produced by any major world power was the Soviet I-153 Chaika. This airplane has been the subject of a few 1:72 scale kits over the years beginning with a Rareplanes vacuformed kit in the 1970s (I still have one!) along with injection molded offerings by Heller, Smer, and A-Model. In 2014, ICM out of Ukraine released an injection-molded kit of the I-153 featuring modern tooling and engineering. The same kit was also re-boxed by Revell of Germany and Hasegawa. Here, we’ll take a look at the Revell of Germany issue of this Soviet biplane fighter.

The Polikarpov I-153 Chaika (meaning ‘seagull’) was a direct descendant of the earlier I-15 biplane fighter. The combat experience of the Russian I-16 monoplane in the Spanish civil war saw them sometimes outclasses by the Italian Fiat CR.32 biplanes flying in support of the Spanish Nationalists. This indicated to the Polikarpov Design Bureau that the age of the combat biplane was not quite over. A design team led by Aleksei Ya Shcherbakov (and with key contributions by Artem Mikoyan and Mikhail Gurevich) created a beefed-up I-15 that still retained the gull-wing configuration and characteristic stubby fuselage but gained greater agility, a stronger airframe, and a more powerful and supercharged Shvetsov M-62 engine. Air-to-air armament consisted of four ShKAS machine guns with more than double the rate of fire. Retractable main landing gear significantly cut down on drag. A hand crank in the cockpit – not unlike that in the Grumman F3F – cycled the gear.

The prototype I-153 first flew in August 1938, and a generous assessment would conclude that the airplane still had a number of bugs. It failed many of the test points set out by Polikarpov and Soviet state. Still, the I-153 production went ahead with the thinking that these deficiencies would be subsequently worked out. Eventually the airplane reached a top speed of 264 miles per hour, found its service ceiling at 32,000 feet, and sustained climb rate of climb around 2,500 feet per minute. Still, not all problems were resolved. The Chaika was quite stable and spin-resistant, but if it was pushed into a spin, it was often deadly. Recovery was exceptionally difficult to the point that intentional spins were prohibited. While much effort was expended to increase the maximum speed of the airplane, aerodynamics prevented coaxing out any more knots out of the biplane.

The I-153’s first engagement was in 1939 during Battle of Khalkin Gol in Mongolia. The Chaika went head-to-head against the Nakajima Ki-27, and the two indeed were relatively evenly matched. Combat revealed another design flaw involving the lack of a firewall between the engine/fuel tank forward of the cockpit, such that fuel tank fires quickly swept back and consumed the cockpit. The production run ended in 1941 after 3,437 I-153s had been built, and not long after, yet more modern Soviet front-line fighters eclipsed the I-153.

Revell of Germany’s re-boxing of the ICM kit contains 74 medium-gray injection molded plastic parts on two sprues (to fit into the Revell box, the single sprue of the original ICM mold was snipped into two) with a third clear plastic sprue holding the single-piece windscreen. Panel lines and access panel screws are recessed. Decals are provided for a single airplane, 24 White, flown by Captain K.V. Soloviyev, 71st Fighter Regiment of the Baltic Fleet Air Force, Summer 1942.

Strengths:  When compared to all previous kits of the I-153, the Revell of Germany/ICM kit is clearly the best Chaika in 1:72 scale. It appears to be shape and proportion accurate. It is also a great little kit beyond that – simple to build, yet very nicely detailed. My test fits between the fuselage halves and lower wings revealed an excellent fit.  The molding is very crisp and high fidelity, with such qualities extending to the smallest of parts, such as the air-to-ground ordnance, could be classified as very. The surface quality of the kit parts, particularly that of the fuselage and wings, is really excellent.  I would place it on par with the finest textures found on some of the best resin kits. I was particularly impressed by the finely recessed panels and screws along with the ribbing effect on the aft fuselage, wings, and stabilizers.  The color instructions are a nice, “modern” departure from the black-and-white line drawings that are the instructions in most kits produced by Revell of Germany.

Weaknesses:  The Revell of Germany/ICM Chaika does have a few shortcomings.  For one, the windscreen is the wrong shape.  The contours of the windscreen should feature rounded corners and be curvilinear in cross-section. Yet, the kit part is sharply angled. None of the engine exhaust pipes are present in the kit, and this is a small but still glaring error with the exhaust pipe ports simply looking like hatch-like recessed coverings. Also, the carburetor air scoop and machine gun ports atop the engine cowling are very shallow and could surely achieve a better scale depth using a pin vise. I was unimpressed by the choice of the single paint scheme. Sure, it’s a classic Chaika three-tone camouflage scheme, but in my research, I found a number of other and far more inspiring schemes on 1-153s in Soviet, Finnish, and even German markings (captured Chaikas). Perhaps keeping the markings and decals simple and not providing alternative markings was a decision related to keeping the cost of the kit down.

Revell of Germany’s reboxing of the I-153 Chaika brings this little kit out into an even broader market where an even wider range of scale modelers can enjoy building it.  It is an overall impressive plastic model kit with much to recommend to it.  With a small explosion of aftermarket parts now available for this kit (ranging from new resin cowlings, wheels, exhaust pipes, control surfaces, and more from manufactures such as Aries, Quickboost, and Atol Hobby), scale modelers have the opportunity to correct some of the oversights in this kit and find the even fuller potential of this excellent Chaika.