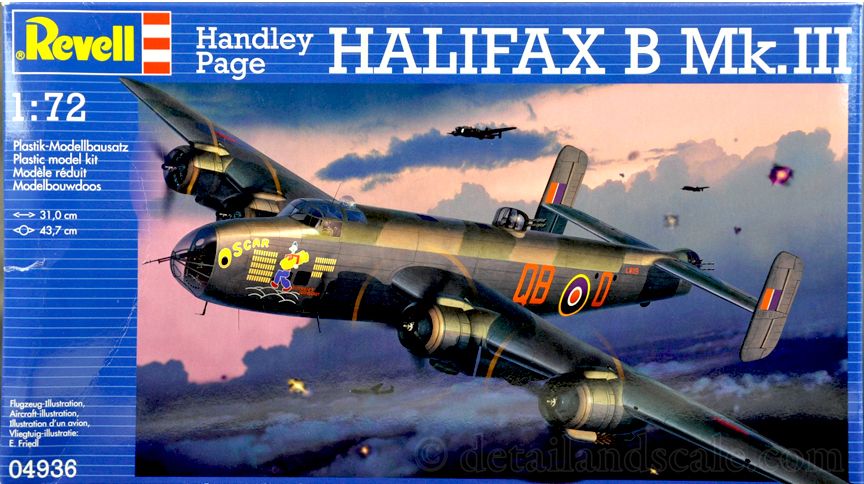 The Handley Page Halifax was one of the principle Royal Air Force heavy bombers of the Second World War. As the war progressed, the Halifax was progressively overshadowed by the Avro Lancaster, though Halifax bombers continued to serve in a variety of roles beyond its original mission of strategic bombing. In late 2015, Revell of Germany released a (semi-) new tool Halifax B Mk. III kit in 1:72 scale. Here, we’ll take a look at this kit of the most numerous Halifax variant ever produced.

In 1936, the United Kingdom’s Air Ministry issued a call for proposal for a twin-engine medium bomber.  By the following year, an Avro design that would become the Avro Manchester was selected. The second place design by Handley Page, designated the HP.56, was wisely also given the green light for development. The order came down from the Air Ministry to redesign the HP.56 as a four-engine heavy bomber and was named ‘Halifax.’ The design could carry 14,500 pounds carried between a fuselage bomb bay and three bomb “cells” in each inboard wing. By November 1940, the airplane entered operational service, and less than five months later, went to war over France.

A total of 6,178 Halifax airframes were produced spanning 33 variants before the production line came closed in April of 1945. At peak production, one Halifax was completed every hour. In service with RAF Bomber Command, the Halifax flew 82,773 sorties and dropped 224,207 tons of bombs. A total of 1,833 Halifax bombers were lost in combat.  As the Halifax was increasingly overshadowed and replaced by the Avro Lancaster, it was progressively transferred away from the front lines of strategic bombing into North Africa and Italy while also modified for roles that included paratrooper transport and glider tug, an early electronic warfare platform, reconnaissance, weather observation, anti-submarine duties, and a special operations support role that involved dropping agents and weapons into occupied Europe. While the RAF was quick to retire the airplane at the end of the war, the Halifax remained in service with Coastal Command and RAF Transport Command for several years. The Royal Egyptian Air Force and the French Armée de l’Air flew second-hand Halifax bombers into the early 1950s. The final Halifax operator was the Pakistani Air Force who retired their last airplane in 1961.

The most numerous Halifax version was the B Mk III. A total of 2,091 were built. Entering service in 1943, the Mk III differed from the Mk I and II in fairly notable ways. The nose turret was deleted and replaced by a transparent nose dome. The earlier Merlin engines were replaced with the more powerful 1,650 hp Bristol Hercules XVI radial engine. Other changes included de Havilland Hydromatic propellers and rounded wingtips. The nose dome was fitted with a single machine gun, and the defensive armament was rounded out with a Boulton Paul dorsal turret and tail gunner position, each fitted with four .303 caliber machine guns.

Revell of Germany’s Halifax B Mk. III kit comes on 11 sprues containing 297 parts, though about 26 of these parts won’t be used on the Mk. III variant. The quality of the clear parts appears excellent, and these come on one large single sprue. The parts are cast in Revell of Germany’s characteristic light gray-colored plastic that has almost a tan tint. The model features fine recessed panel lines. Other details, such as bolts found on interior bulkheads or landing gear are raised details.

This new issue of the Mk. III variant of the Halifax is based on their earlier Mk. I and II kits, but has the new wingtips along with nose dome, turrets, and the appropriate Bristol Hercules XVI radial engines and props. This is a fairly complex kit, with assembly playing out over 92 separate steps.  Decals are provided for two different Halifax bombers:

(2) a Halifax A Mk VII, No.644 Sqn, RAF Tarrant Ruston, April 1945. Incidentally, this second aircraft on the decal sheet is the same airframe that is today restored and on displayed at the National Air Force Museum of Canada in Trenton, Ontario, Canada. It is also the only fully restored Halifax Mk. III in the world, and we understand that Revell of Germany carefully studied this airplane during the development of this kit.

Strengths:  This model has many high points.  The exterior of the airframe is beautiful, with delicately engraved panel lines.  While I am not an expert on the Halifax, a quick consultation of some line drawings of the airplane indicate to me that the panel lines are accurate and the shape of the model is correct. The interior, including the cockpit, tail gunner’s position, wheel wells, and the bomb bay are relatively rich with a high level of detail, especially for 1:72 scale.  The Hercules engines also sport a solid level of detail for injection-molded kits in this scale.  Control surfaces, such as the flaps, rudders, and the trailing edges of the horizontal stabilizers are separate and positionable.  The rudders and elevators are engineered to be moveable after construction, though some modelers will likely opt to glue them in one position (up or deflected). Small detail parts that are often neglected in 1:72, such bomb bay door actuators are not only present, but they are cast in impressive detail.

A helpful construction feature involves internal wing spars that help guide the wings to a solid fit with the fuselage. I snipped off the wings and fuselage from the sprues did some test fitting. It reveals a good fit between the principle assemblies all around. While a detailed kit with lots of parts, I would certainly not classify this Halifax model as ‘over-engineered.”

The decals are of an excellent quality.  Though it only says ‘Printed in Italy’ on the decal sheet, I suspect that Cartograf had something to do with these. The decal color and print quality is simply gorgeous while the carrier film is very restrained and practically invisible.

Weaknesses:  The box is over-sized for its contents, and that empty space within the cardboard box makes it vulnerable to crush damage. Indeed, my sample box displayed crush damage. If you have this kit in your stash, make sure it’s towards the top and not bearing much weight!

Mold ejection pin markings are rather prevalent in pretty hard-to-clean-up places. You’ll find quite a few such blemishes among the finely raised details of the cockpit sidewalls and the bomb bay ceiling. Filling and sanding them without doing damage is do-able, but it will be time consuming. That’s my diplomatic way of saying it might be just a little aggravating, given that: (1) some will be difficult to eliminate without marring some interior detail, and; (2) that a growing number of kit manufactures these day are figuring out some very clever ways to place ejection pin points in hidden areas of the model. Also, the bomb bay lacks detail, represented only by spars and longerons. There’s a lot more detail in there in the actual aircraft.   There were also bomb cells in the wings just inboard of the number 2 and 3 engines. Interior detail of the wing bomb cells are absent in the kit.

There’s not a lot of raised rivet or sunken screw detail on the model. There’s a few recessed screws on the engine nacelles and on the access panels on the tops and bottoms of the wings. The fuselage halves, by my count, have three recessed screws per side.  Since I have not had access to a real Halifax bomber to study its skin, I can’t say if this is accurate. Still, from what I understand, the Halifax was flush-riveted, and this would seem to be a case of surface detail reduction in this 1:72 scale kit. Also – modelers will need a razor saw if they wish the their wheel well and bomb bay doors in the open position. These multiple parts are cast as single pieces.

Revell of Germany should be congratulated for this new Halifax kit.  It certainly fills in multiple gaps in the world of 1:72 four-engine WWII bombers. This represents a far superior model when compared to the decades-old Halifax Mk. III by Airfix. Just out-of-the-box, it is a very good model kit that can certainly be a contest winner.  Currently, aftermarket details are virtually non-existent for the Mk. III, though it is still a new release and detail sets will undoubtedly emerge. Manufactures such as Eduard have released several photoetched metal detail sets for Revell of Germany’s Halifax Mk. I and Mk. II kits.  Obviously, any Mk. I or II engine aftermarket details (such as the resin parts by Quickboost) would be inappropriate for this Mk. III kit.  Beyond that, we’ll leave it up to the judgment and research of the modeler to determine how, if any, of other detail sets, such as Eduard’s photoetched bomb bay, can be accurately adapted to the Halifax B Mk. III.  Such effort will only enhance the quality of this scale model of this distinctive RAF bomber that played key roles in the air war over Europe and North Africa.