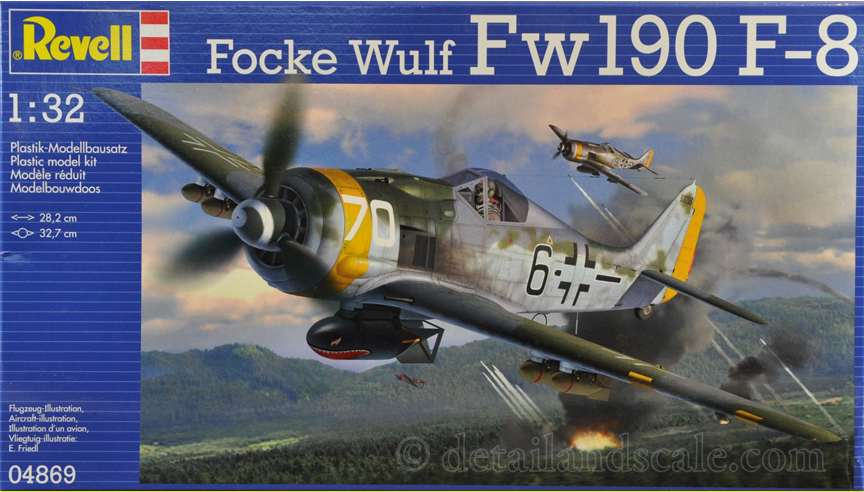 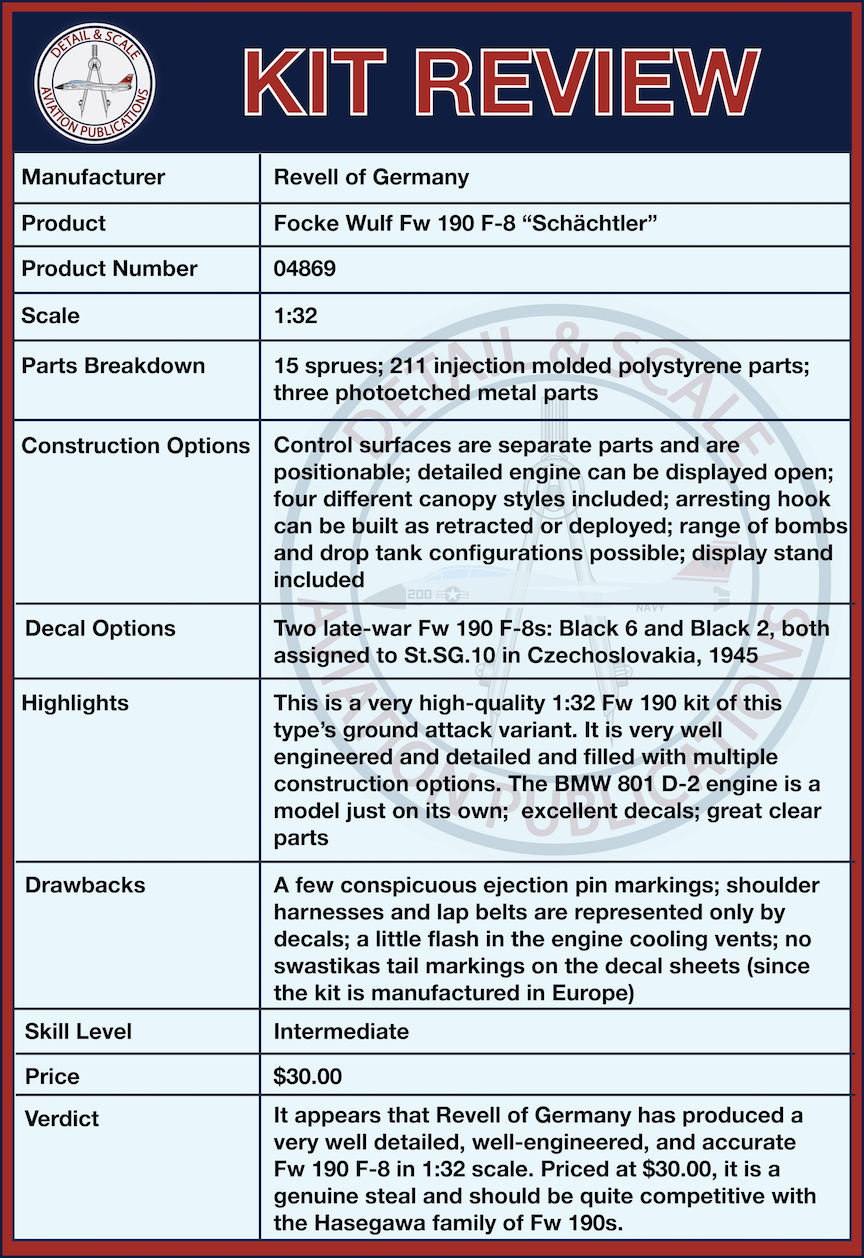 The Fw 190 aircraft was one of the most prolific and famous combat aircraft of World War II and it needs no introduction.  In 2015, Revell of Germany released this newly tooled 1:32 kit of the Fw 190.  Compared to many other 1:32 kits of this iconic airplane, this is a relatively low cost kit.  Yet it is a high-quality alternative to the Hasegawa family of Fw 190s or the multimedia Pacific Coast Models kit.  It also represents the F-8 variant with all the underwing stores to go along with the aircraft’s ground attack mission.

In 1934, the German Ministry of Aviation (RLM) issued a call for proposal for a modern fighter design to definitively rearm and modernize the Luftwaffe.  The Bf 109 was selected in 1936, but by 1937, the RLM saw a need for a second fighter to complement the Bf 109.  Focke-Wulf designers led by Kurt Tank took another look at their losing Fw 159 prototype.  The design reached maturity with inclusion of an air-cooled, 14-cylinder BMW 139 radial engine, a low-drag cowling and other aerodynamic improvements, and extensive use of electrically driven controls that made handling crisper and more responsive.  The first of nearly 20,000 Fw 190 Würgers (or Shrikes) flew on 01 June 1939.  The Fw 190 was arguably the Luftwaffe’s most effective day fighter, serving in every corner of Europe and North Africa.  Many pilots felt that the Fw 190 was superior to the Bf 109 in terms of armament and low to mid-altitude performance.

The Fw 190 excelled as a fighter-bomber, and the Fw 190F-8 was a dedicated ground attack variant.  It was derived from the Fw 190A-8 air-to-air fighter.  As such, the F-8 featured some tweaks to its BMW powerplant to optimize low-altitude performance.  It was also fitted with up to four ETC 50 underwing bomb racks and one centerline ETC 501 bomb rack for carriage of diverse air-to-ground stores up to a 500 kg bomb.

Revell of Germany’s Fw 190 F-8 comes on 15 sprues containing 211 parts, though approximately 13 parts won’t be used on the F-8 variant.  The parts are cast in Revell of Germany’s characteristic light gray plastic.  The 15 clear parts are blemish-free and feature excellent optics.

The model possesses fine and nicely executed recessed panel lines and screws.  Overall, the quality of molding and level of detail is excellent for an injection molded kit.  It does appear to have an accurately shaped airframe.  The decal sheet features markings for two late-war Fw 190 F-8s: Black 6 and Black 2, both assigned to St.SG.10 in Czechoslovakia in 1945.  Though assembly plays out over 72 separate steps in the instruction booklet, it is a fairly straightforward process.

Strengths:  This model has much to recommend to it.  Interior details feature an accurate and reasonably well-detailed injection molded cockpit and wheel wells.  In the cockpit, instrument bezels are raised while the instrument dial faces are represented in the kit by high-quality decals.  The quality and detail of the BMW 801 D-2 engine is a true highlight.  It is a small model on its own.  Thankfully, the various engine bay access panels can be displayed opened-up, allowing viewers to enjoy these details.

All of the airplane’s control surfaces are provided as separate parts.  There’s a big spar in the inside center of the lower wing assembly, and it will help modelers achieve the proper anhedral as they assemble the wings to the fuselage. Other optional details include provisions for retracted landing gear, the pilot’s step, smooth or treaded tires, and gun covers for the top of the wings.  To match the late war markings in the kit, I think modelers should go with the smooth tires, but check your references to be sure.

It appears that all the key Fw 190 F-8 details were accurately captured in this kit.  For instance, it has the proper wing configuration with the deleted wing guns and ejection chutes.  The proper metal propeller is represented in the kit.  No less than four versions of the canopy are in the kit, and include open and closed versions of the flat and bubble canopy.  The canopies lack a centerline seam.

The underwing stores include a diverse set of well-detailed pylons and air-to-ground bombs.  Revell of Germany’s F-8 can be bombed-up with one big SC500 or the smaller SC250 bomb on the centerline.  On the wings, up to four SC50 bombs can be mounted, or one can fit two 300 liter drop tanks.

The kit also comes with a circular stand to mount the model on with the gear up or down.  It has a range of motion that allows for both tilt and swivel.  I snipped off the wings and fuselage from the sprues and did some test fitting.  My sample demonstrated a very good fit between the principal assemblies.

The decals are of an excellent quality.  Though it only says ‘Printed in Italy’ on the decal sheet, they’re printed by Zanchetti.  Their decals are Cartograf-like in their clarity, color, and print quality, which are all outstanding here.  Carrier film is very restrained and practically invisible.

It appears that Revell of Germany has provided scale modelers a very well detailed, well-engineered, and accurate Fw 190 F-8 in 1:32 scale.  Priced at $30.00, it is a genuine steal.  It looks like it will be competitive alternative to the Hasegawa family of Fw 190s.  It’s a recent release, and as of this writing, many scale modelers are still waiting for aftermarket detail sets to supplement this kit – but as an injection molded kit, it holds its own in respect to level of detail.  It will build into a very strong replica of a distinctive variant of one of the most iconic airplanes of WWII.