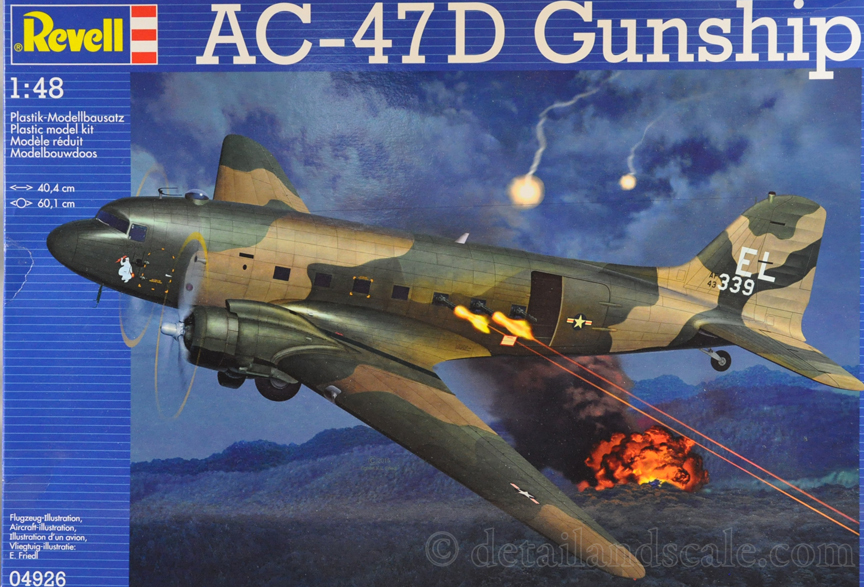 The Monogram C-47 Skytrain in 1:48 scale is a classic kit from the late 1970s. These molds were also the basis for Monogram’s AC-47 Vietnam-era gunship kit, first released in the 1980s.  In 2015, Revell of Germany brought back the AC-47 in 1:48 scale. This time, there are some new interior parts that bring new life the Spooky gunship.

Beginning in World War II, development began on an airborne gunship concept to provide close air support for ground troops. By 1964, the Vietnam conflict provided the impetus for this concept take concrete form. USAF experiments with a Convair C-131 fitted with single GAU2/A minigun demonstrated that a pilot flying a tight left-hand pylon turn could allow the gunship to hit a target area on the ground with considerable accuracy and firepower. Flight tests soon led to the conversion of a pair of C-47 Skytrains at Bien Hoa airbase that were fitted with three 7.62 mm General Electric miniguns, ground illumination flare dispensers, and associated gear.

Assigned the radio callsign “Puff,” the newly inaugurated AC-47Ds carried 24,000 rounds of ammunition and some 45 flares. They went straight into combat, demonstrating a consistently effective ability to repel North Vietnamese ground attacks and the protection of assets, such as Special Forces operators on the ground.  Put in plain terms, an AC-47 could put a round into every square yard of a football field-sized target area in less than 10 seconds. The AC-47 also held enough gas to loiter over target areas for hours, ready and available when needed.  The gunship concept was more than validated – it became a highly valued and often critical asset in the close air support role.

By 1965, the illustrious gunship’s radio callsign had changed to “Spooky” as more AC-47 conversions were completed. A total of 41 served with the USAF during the Vietnam conflict, 12 of which were lost in combat. The AC-47 played a particularly key defensive role in the 1968 siege of Khe Sanh.  As the war progressed, so too did gunship design. The AC-130A and AC-119G/K became the direct replacements for the AC-47D. The Hercules-based platform began flying out of South Vietnam in 1967, while combat flight tests of the AC-119 began in 1968. AC-47s were progressively phased out, with some transferred to the South Vietnamese and other Southeast Asian air forces. Even today, some Latin American air forces, such as Colombia, operate various armed versions of the C-47 aircraft, continuing the AC-47’s legacy in ways unforeseen half a century after the concept of a Skytrain-based gunship first took flight.

Revell of Germany’s AC-47D gunship is in essence a reissue of the classic Revell kit from 1978 that’s also been boxed more frequently under the Monogram label over the years.  The kit consists of 112 parts on just five sprues, and only four of these parts are not intended for use on the AC-47. It comes together following 47 steps in the instruction booklet. This is a kit that’s approaching 40 years old, and it reflects a state-of-the-art kit from the late 1970s. Its quality and characteristics are certainly on par with other Revell and Monogram classics of that era. In other words, it is a well-designed kit that accurate in its shape. It’s also pretty large when completed. All the panel lines and rivets are finely raised detail. The kit also provides a relatively well-detailed cabin interior for a plastic kit (cockpit, radio room, gun compartment, and even the lavatory in the aft end of the fuselage). The large aft cargo door can be positioned open or closed.

Strengths:  This kit has aged relatively well, considering the many advances in kit engineering and production since 1978. This AC-47 kit will build into a very respectable replica of the Spooky gunship, but lacks many of the features of today’s best kits, such as recessed panel lines, rivet details, or separate parts for control surfaces. The interior gives the average modeler quite a bit of detail to work with and enjoy, while a more advanced modeler will see a starting point for adding as much detail as they wish.

The new parts here are the ones that start with the number 200.  These are the interior elements for the miniguns, minigun mounts, flare dispensers, and crew seats, and other details in the ‘business side’ of the AC-47. These certainly reflect more modern molding technology and the parts look good.  The main landing gear from the original issue are also nicely done.

Big ejection pin marks are well placed, as nearly all of them should be invisible when the interior is assembled.  Just look out for the ejection pin mark just aft of the inside of the pilot and co-pilot’s side window.

I snipped off the wings and fuselage from the sprues and did some standard test fitting. My sample demonstrated a good fit between the principle assemblies.

The decals are of an excellent quality.  Though it only says ‘Printed in Italy’ on the decal sheet, they’re printed by Cartograf, and are outstanding decals in all respects. Carrier film is very restrained and practically invisible.

As a late 1970s kit, wheel well interior details are practically non-existent. None of the control surfaces are molded separately, and can only be displayed in the neutral position. The raised panel lines might turn some off some model builders who prefer recessed panel details. There are no shoulder harnesses or lap belts provided for seats occupied by the pilot, co-pilot, and radioman. The rear of the Pratt and Whitney (formerly Wright) R-1820 engines are molded flat into the engine’s firewall, and even though these were twin-row radial engines, the kit parts depicts only one row.  The three crew members are well-known characters, also appearing in the Monogram B-17 and B-24 kits. Their attire and flight gear is appropriate for WWII aviators and ground crew – but not for those of the late 1960s to early 1970s.

Though it is an older kit with some new parts, Revell of Germany’s 1:48 scale AC-47D remains a respectable model that is still be enjoyable to build. It is certainly recommended. To further make the case, a high-quality aftermarket details are available for this kit. A variety of comprehensive photoetch metal detail sets by Eduard (e.g., interior, exterior, and landing flap details), along with some resin detail parts by Quickboost (ammo boxes and minigun barrels) will enhance this venerable kit even further if the modeler wishes.