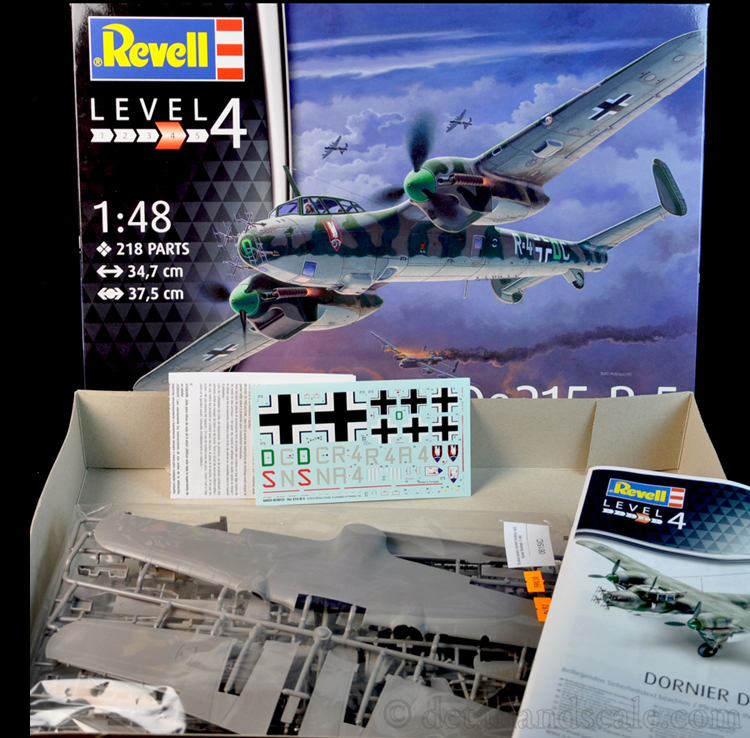 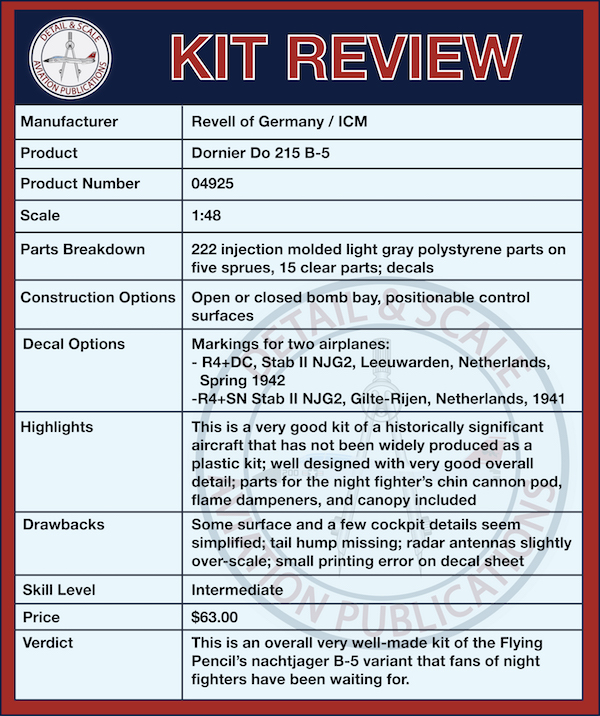 Night fighters of the Second World War carry with them a special allure. They flew unique and dangerous missions using pioneering technology while exploiting the cover of darkness. They reflect some of the earliest thinking surrounding low-observable “stealthy” aircraft, particularly regarding making night fighters hard to visually acquire at night. The Germans were particularly prolific their development of night fighters, in part driven by the effort of countering British night bombing tactics. One such aircraft to emerge from this era was the Dornier Do 215 B-5. ICM released a 1:48 scale injection molded kit of this aircraft in 2015. In this review, we’ll examine Revell of Germany’s even more recent 2016 reissue of this kit that includes new parts.

The origins of the Do 2015 B-5 can be found in the Do 17, which was a German light bomber. Designed and manufactured by Dornier Flugzeugwerke, the Do 17 reflected mid-1930s design philosophy, with two engines mounted on the wings and combined with a twin tail fin configuration. Its thin fuselage earned the nickname Fliegender Bleistift, or the “Flying Pencil.” It was conceived of as a schnellbomber, or a speedy light bomber that could outrun any intercepting aircraft. The Do 17 was considered a solid airplane by its crews and its agility and speed at low-altitude made it a very elusive target. The Do 17 was one a member of what could be called the original Luftwaffe “bomber triad” during the first three years of WWII. The production run ended in 1940, and the Ju 88 began to replace the Flying Pencils. However, one descendant of the Do 17 took to the night skies over Germany.

The Do 215 started out life as an export version of the Do 17 in 1937.  This design featured uprated engines that provided significantly improved performance. It also caught the attention of the Luftwaffe and led to the production of ten Do 215 variants. In all, Dornier built 105 Do 215s between 1939 and 1941 at their Oberpfaffenhofen production line. Do 215s served again as light bombers and also took on reconnaissance roles and that of a nachtjager, or night fighter, in the B-5 version.

Officially known as the Kauz III, the B-5 still carried the Flying Pencil nickname. The B-5s were not new-build aircraft, but were converted Do 215 B-1 and B-4 airframes. The glass nose was replaced with a solid nose and flame dampeners were also fitted over the exhaust pipes to reduce visibility at night. Initially, they were fitted with an infrared searchlight in the nose and armed with 7.92 mm MG 17 machine guns above the infrared sensor and two 20 mm MG FF cannons in in a pod fitted to the underside of the nose.

In combat, the infrared searchlight system was a deemed a failure, so the FuG 202 Lichtenstein B/C radar was installed on a number of Do 215 B-5s beginning in mid-1942. This was a low band UHF search radar that operated at a maximum RF output power of 1.5 kW in the 490 MHz range. The Matratze (mattress) antenna configuration mounted on the nose consisted of 32 dipole antennas configured in four groups of eight at the far end of one of four forward-projecting radar masts.  The B-5s flew night combat missions from 1941 to 1944 and were retired when more advanced night fighter variants of the Bf 110, He 219, and Ta 154 achieved operational status.

Revell of Germany’s reboxing of the 1:48 scale ICM kit comes in a large-format box with dramatic box art (though with flames shooting out of the flame-dampened engine exhausts, it looks like a little artistic license was exercised). Within a single re-sealable plastic bag, you’ll find five greyish-brown injection molded sprues containing a total of 222 parts, one clear sprue with 15 parts, and one decal sheet. The instructions are printed in color and feature 76 steps. Markings for two Do 215 B-5s are provided:

Strengths: The ICM-derived Revell of Germany Do 215 B-5 is overall a very good-looking model. Parts are very cleanly cast with lots of quite high-fidelity detail. Panel lines are all recessed and are very cleanly executed.  Test fits of the major assemblies (fuselage, wings, and wings to fuselage) revealed an excellent fit and panel line alignment across fuselage and wing halves.  The kit also features a straightforward parts breakdown. It’s not over-engineered, and the relatively small number of parts should make for a generally enjoyable build.

A new canopy is provided with the appropriate configuration for the B-5 night fighter including the cutout to accommodate the pilot’s night sight.  A central critiques of the first issue of the ICM kit was the lack of the chin pod for the 20 mm cannons and the missing flame dampeners over the engine exhaust stacks. Considering these were existential parts of the Do 215 B-5’s configuration, their absence in the original ICM issue of the kit could be considered both inexplicable and egregious. Thankfully, the Revell of Germany kit contains new parts featuring the chin cannon pod and flame dampeners. Though the instructions show installation of the landing flaps, rudders, and elevators located in the neutral position, they can all be positioned down or deflected if the builder wishes. The bomb bay can also be built up and positioned open or closed (you’ll need to cut apart the bomb bay door halves) but be sure not to load up your night fighter with the bombs that come in the kit, as those are leftovers from ICM’s earlier releases of the bomber versions of the airplane.

The more contemporary ICM kits I see, the more I become a fan of ICM.  They are doing really great work in terms of subject matter, but I am particularly enamored of their overall engineering and molding quality (though for a few exceptions see below). ICM is really achieving some very intricate detail on their plastic parts, such as the thatch seats, tail wheel tire hub, and cockpit details (though again, see below for a few observations). The surface quality of their parts is also hard to beat. I also find the second marking option in an overall black scheme to be particularly striking.

Weaknesses:  This kit has a few issues, none of which are particularly significant but that do register on one’s radar, so to speak. The box is significantly oversized for its contents (probably could be about ~ 40% smaller) and is susceptible to crush damage if there’s a lot of weight placed atop it. While the surfaces of the exterior airframe parts are really just beautifully executed, there is a near total lack of rivet, screw, and fastener detail. Of course, almost no one has a surviving Do 215 to compare the kit to (the only exception was the partial wreckage of one Do 215 that was recovered from waters just off the Dutch coast in 2007). This means that I can’t say for certain if the real airplane was like the kit in this respect. If Dornier manufacturing techniques were consistent, then the Do 215 might have used the same ultra-smooth flush riveting that I’ve observed on the Do 335, and you have to look at the skin of the 1:1 scale airplane at quite an angle and catch it in the shadows to really see the rivets on the skin. Doing my background research on this review, period photos of the Flying Pencil were of no use in resolving this question. So, if we’re talking super-flush rivets, there’s really no foul here in 1:48 scale.

The Lichtenstein B/C Matratze antennas are overscale (dipoles seem thick in cross-section), but frankly this is one of the technical limitations of injection-molded plastic. Eduard produces photoetched metal antennas for the Do 215 B-5 and are recommended to solve this problem. While much of the cockpit is nicely detailed, the radar and radio sets seem a bit oversimplified just as some engine details. The tail contains a shape error: there should be a distinct hump where the aft portion of the fuselage meets the horizontal stabilizers. Vector models makes a corrected resin replacement tail to fix this shape error, and it features a new multi-part tail wheel assembly that looks superior to that in the kit.  There is one red stripe (walkway marking) on the decal sheet that does appear to be misprinted as it looses its resolution and its defined border for about half of the length of the decal.  As this kit is produced, marketed, and sold in Europe, there are no swastikas on the decal sheet but those can be obtained from various aftermarket decal sources.

Revell of Germany’s reboxing of the ICM Do 215 B-5 night fighter is an overall very well-made and interesting kit.  There aren’t that many kits of the Do 215, and this is the only one in 1:48th scale with the correct parts for the night fighter variant. Out-of-the-box, this is a solid plastic model kit to be sure, and if one wishes to add more detail, Eduard makes a range of photoetch metal interior and exterior detail parts, Quickboost makes resin props, metal landing gear can be added using Scale Aircraft Conversion parts, and Pmask and Montex offer a range of painting masks. In sum, this is the Do 215 B-5 kit to add to one’s night fighter collection, and does a fine job of capturing this early to intermediate stage in the development of Luftwaffe night fighter technology, design, and history.