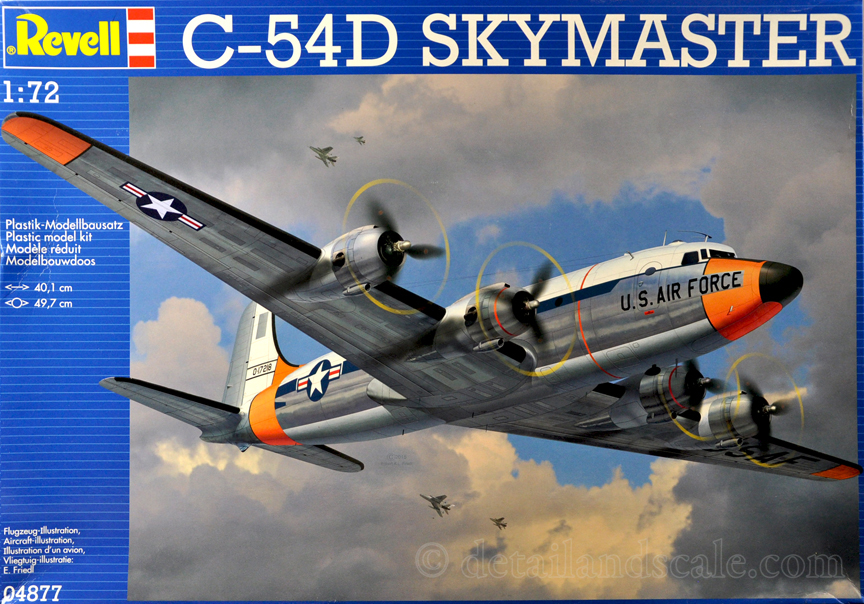 Airlift has been a fundamental component to all modern conflicts, and one of the most vital contributors to U.S. airlift efforts in the mid-20th century was the Douglas C-54 Skymaster. In 2015, Revell of Germany released a new tool injection molded C-54D kit in 1:72 scale. Previously, very few C-54 kits were available in any scale, and the majority that did exist were either in 1:144 scale or limited production injection molded or vacuform kits that often left much to be desired. In this review, we take a look at Revell of Germany’s Skymaster.

The U.S. Army Air Corp’s C-47 Skytrain, which capitalized on the strengths of the Douglas DC-3 civilian airliner upon which it was based, is widely considered as the most versatile transport aircraft of WWII. Yet, the C-47’s “big brother,” the four-engine C-54 Skymaster, was working just as hard behind the front lines. The development of this airplane followed a similar path in that it was derived from the design of another Douglas civilian airliner – the DC-4. But when compared to the C-47, the C-54 could fly 50-75 knots faster, hauled twice the maximum cargo capacity of 28,000 pounds, and its 3,900-mile range made it America’s first transport aircraft with non-stop transatlantic capability.

The first C-54 Skymaster flew on 14 February 1942, and quickly went into service. The production run went into 1947, with a total of 1,170 C-54s built across six major variants produced between the Douglas plants in Santa Monica and Chicago. Most C-54s went to the USAAF/USAF. The Navy also acquired the type under the designation of R5D, and export C-54s flew with 14 other nations.  A specially equipped VC-54C, named Sacred Cow, served as President Franklin Delano Roosevelt’s personal transport, ferrying him to the Casablanca Conference among other destinations. Sacred Cowalso was President Truman’s initial aircraft. He signed the National Security Act of 1947 aboard the airplane, thus giving birth to the United States Air Force and the plane became first aircraft to carry the callsign of Air Force One (as an aside, Sacred Cow and the rest of the Presidential Aircraft Collection is on now on public display in the new fourth building at the National Museum of the United States Air Force in Dayton, Ohio).

The C-54 was a true workhorse whose duties included transport, search and rescue, training, flight test, weather observation, support of nuclear weapons tests, and missile tracking and recovery. Its most prominent place in history was established by its participation in the Berlin Airlift.  Some 300 C-54s and R5Ds were the principal U.S. lifeline to Berlin between 1948-1949. The Skymasters accomplished this feat despite that the fact that the C-54 was operating near the edges of its performance envelope. The high operational tempo involving lots of repeated maximum power takeoffs dramatically shortened the lifetimes of the engines, while continuously heavy landings near maximum gross weight loosened screws and rivets, fractured airframes, and predictably took a toll on tires, brakes, and the many nose gears. This was complicated by the fact that MATS and USAFE supply chains and infrastructure were ill-prepared to meet the suddenly increasing maintenance demands, especially at the beginning of the Berlin Airlift.

Following the end of WWII, hundreds of C-54s were de-accessioned and sold to dozens of airlines around the world and were converted into airliners. Those that continued on in USAF service held a prominent role as the primary airlifter during the Korean conflict. By the early 1950s, many C-54s were nearing 14,400 hours on their airframes, which was considered the maximum safe operating lifetime. The Douglas C-124 Globemaster was fortunately entering the inventory by then and began to phase out the Skymaster. The final USAF C-54 flight was in 1972 and the U.S. Navy Test Pilot School at NAS Patuxent River, Maryland, bid farewell to the final operational C-54 in 1974.

Revell of Germany’s C-54D kit comes on 14 sprues (designated by letters A, B, D, E, F, J, K, and L) containing 326 parts cast in Revell of Germany’s characteristic light gray-colored plastic. A fifteenth sprue (Sprue O) contains an additional 20 clear parts that are of excellent optical quality. The model features fine recessed panel lines. Rivet and screw detail is only represented on access panels on the bottom of the wings.

This is a fairly complex kit, with assembly playing out in 98 separate steps.  Decals are provided for two different postwar USAF Skymasters: (1) 0127218 as it appeared in 1949 in a white over natural metal scheme with dayglo orange on the nose wingtips, and tail, and (2) 317227 as it appeared during the Berlin Airlift between 1948-1949 in an all metal scheme.

Strengths:  This kit has many high points.  The exterior of the airframe is outstanding, as the plastic is perfectly smooth and the delicately recessed panel lines are rather sublime. From my references and photos, the panel lines appear accurate and the shape of the model appears correct. The interior of the RoG C-54D – from the cockpit to the radio operator and navigator’s position to the cargo/troop compartment – is all very well done and full of well-executed details – we’re talking at upper end of the injection-molded technology. The sides of the troop compartment are molded as separate pieces, and as such, are filled with ribbing details quite amenable to pre- or postshading painting techniques. In a thoughtful bit of engineering, the cabin windows slip between the inside of the fuselage and the outside of troop compartment clamshell assembly, so the long strip of clear plastic that connects all the windows to each other are effectively hidden from view.  Following a trend seen with some manufactures, the windscreen is part of a much larger clear part that includes some of the upper nose of the C-54. Technically speaking, the one does not have to fair in the windscreen, as you’ll be working in the nose well below the glass.  This thoughtful engineering is much appreciated.

The parts for the troop seats are also very well done and well-detailed, though technically, the seat back mesh is notably over-scaled in terms of thickness. The Pratt & Whitney R-2000 engines are particularly well executed, especially for a 1:72 scale kit. Optional parts for open and closed cowl flaps are included, and the crew access door and cargo door can be positioned either opened or closed. The landing gear are also well represented and missed barely a detail, including parts even for the main landing gear brake lines. The rudder, flaps, and and elevators can be positioned in either neutral or dropped/deflected positions.  Small detail parts that are often neglected in 1:72 scale, such as flap actuators, are also included in this kit.

The decals are of an excellent quality.  Though it only says ‘Printed in Italy’ on the decal sheet, the small ‘Z’ following the product number means that they were printed by Zanchetti. The decal color and print quality is generally excellent while the carrier film is restrained and mostly invisible.

Weaknesses:  The box is a bit over-sized for its contents, and that empty space within the cardboard box makes it vulnerable to crush damage. Indeed, the box for my sample kit was a bit smashed. If you have this model in your stash, make sure it’s not at the bottom of a pile of kits.

The cockpit instrument panel is not my favorite part in this kit, as dial faces are simply sunken circles. There’s not much there for the detail painter, but this is probably because Revell of Germany intended builders to use the decal sheet’s instrument panel dial faces that are indeed adequate for this scale.  Earlier in the review, the rivet/screw detail on the bottom of the wings was discussed.  Many of these are very shallow, and if a scale modeler uses washes to bring out such surface detail, controlled and thin applications of paint will be needed to ensure that the depressions for the screws. This unevenness of depth is especially an issue on the engine nacelles where rivets seem to be most shallow and can easily be filled with paint and become indistinct. The wheel wells are a bit sparse and simplified, and could use more detail. Also – modelers will need a razor saw if they wish the nose wheel doors in the open position, as the left and right doors are molded as a single, closed piece. Finally, the C-54 has a center of gravity that is aft of the main landing gear: she’s a tail-sitter. Don’t forget to add the two areas of nose weights as suggested by the manufacturer. Finally, it does appear that the blue in the national insignias is a bit too light, though many may not perceive of this slight shade anomaly.

Revell of Germany has done a real solid job on this new-tool C-54D kit. It fills various gaps in the world of 1:72 scale WWII aircraft, early Cold War subjects, and transport aircraft alike. Just in the box, it is by far the best C-54 in any scale.  Some aftermarket details have now been released from Eduard for the cockpit, interior (including some great pre-painted photoetched parts to replace the kit seats in the cargo compartment), engines, exterior details, and masking sets. Caracal Decals has also produced a decal sheet including what might have been the most colorful Skymaster bearing the markings of Blue Angel Number 8.  Overall, the high quality and attention to detail makes this a very attractive kit for builders of multiple genres and interests.