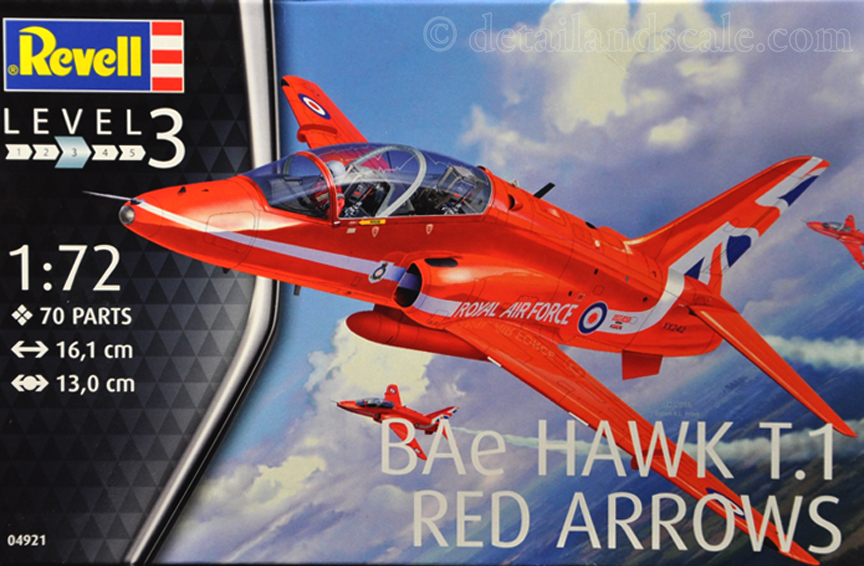 The Red Arrows of the Royal Air Force are among the world’s great aerobatic demonstration teams.  In 2015, Revell of Germany released a new-tool 1:72 scale injection molded plastic kit of the BAe Hawk T.1 in Red Arrows markings for their 2015 season. In this review, we’ll take a look at this small but notable model kit.

Britain’s first bona fide aerial demonstration team emerged between 1920 and 1925. The Second World War understandably provided a hiatus in air demonstration activities, but between 1947 and 1966, multiple RAF aerobatics teams emerged – now flying jets – and included such storied demo teams as the Blue Diamonds, the Black Arrows, the Tigers, and the Red Pelicans.  In 1966, the Royal Air Force Aerobatic Team was formed, and took the name of the Red Arrows. The team started out with the Hawker Siddeley Gnat and was replaced by the BAe Hawk T.1 in 1979. Red Arrow Hawks are slightly different than the those assigned to advanced pilot training, as the Red Arrow jets possess an upgraded uprated engine smoke generating system that can produce red, blue, or white smoke. Currently based at RAF Scampton in Lincolnshire, the Red Arrows, by the end of their 2015 season, have flown 4,725 shows in 56 countries over 51 years.

Revell of Germany’s new-tool 1:72 Hawk four sprues containing 70 parts. Everything but the clear parts are cast in red plastic, as perhaps Revell of Germany has younger or entry-level modelers in mind with this kit. The model features fine recessed panel lines and screw/rivet detail, while some rivet detail (e.g., on the inside of the main landing gear doors) are raised. Decal options provide markings for customizable schemes where with a second, smaller decal sheet features the tail numbers of any of the nine Hawks that flew during the 2015 airshow season.

Strengths:  This model strikes the observer as being very well made. In other words, this is a cool little kit.  Parts breakdown is straightforward and uncomplicated, and the kit engineering is straightforward. It is also a well-engineered kit in that most ejection pin markings are well hidden. I snipped off the wings and fuselage from the sprues did some test fitting. It reveals a good fit between the principle assemblies all around. The panel lines are subtle and restrained, though the external airframe screw/rivet details are so ultra-fine that they may get filled in by even a light application of paint.

For a 1:72 scale model, the overall level of exterior and interior detail is admirable. The cockpit detail is generally quite impressive despite the lack of sidewall details. Landing gear and wheel wells are also well-done, though are somewhat basic. The Martin Baker Mk. 10 ejection seats are just excellent, save one point (see below).

The decals are of an excellent quality.  Though it says ‘Printed in Italy’ on the decal sheet, it appears that Cartograf produced the kit decals for Revell of Germany. The decal color and print quality is outstanding while the carrier film is very restrained and practically invisible. Of note: the white markings on the Red Arrows Hawks are provided as decals. A perennial problem with white decals on a red or orange base color often involves the translucency of the white decals, making many modelers quite frustrated (quite appropriately!). The problem lies with a thin, white decal, and the look of all that red or orange will show through the white decal. On this decal sheet, the white ink on the decals appear to be printed extra thick and should not be translucent.

Weaknesses: This kit only has a few shortcomings. First, A few large ejection pin marks are on the lower part of the cockpit sidewalls and exhaust interior, are conspicuous enough to probably necessitate removal.  It seem obvious that decals should have been included for the canopy explosive (or det) cords since they are such conspicuous and well-known features of the Hawk. Yet, in this kit, the det cords are represented, but they are are just recessed areas in the canopy parts.  The shoulder harnesses and lap belts of the Mk.10 ejection seats are notably inaccurate and idealized representations of the real thing, as the shoulder harnesses are far too long and they certainty do not connect to the lap belts!

The underside white triangle decals cross the main landing gear bay doors, but these will need to be appropriately cut if the model is built with the wheels down. Considering the sophistication of decal manufacturing today, these decals could have been sized and separated for the wheels-down configuration. Also, the instructions only provide a guide for markings of just one of the 2015 Reds, XX242. Yet, the smaller, second decal sheet has tail numbers for 12 additional Red Arrow T1s that are not in the instructions, and the scale modeler might have to do a little research/reference photo checking if they wish to accurately represent any of these other airplanes.

Revell of Germany has produced a nicely executed kit of the Red Arrows Hawk in 1:72 scale that appears to be a straightforward and enjoyable build. Despite a few minor shortcomings, this kit of will build into an excellent replica of the Hawk T1s flying with one of the world’s greatest aerial demonstration teams.