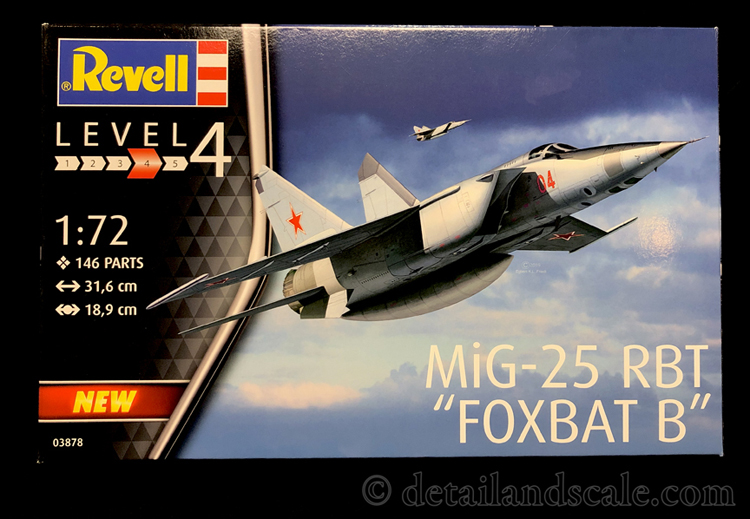 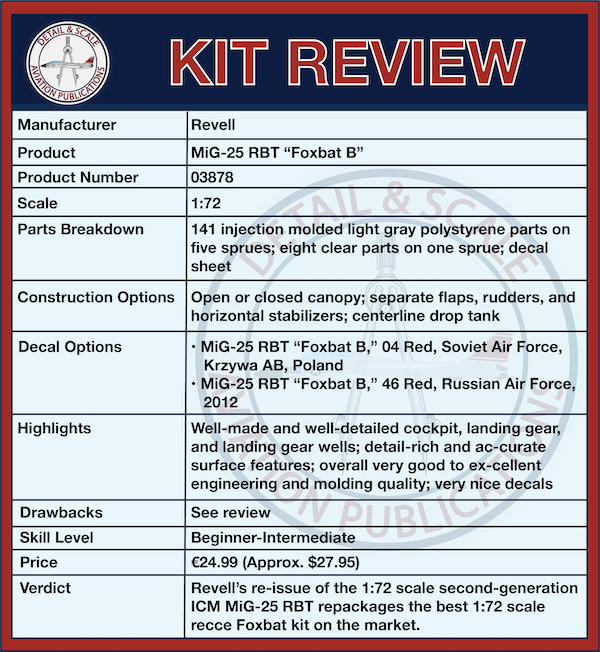 The MiG-25 was in various ways a pinnacle achievement of Soviet aircraft engineering.  It was among the fastest and highest-flying airplanes in history.  It is the fastest aircraft in operation today.  The MiG-25 has also been the subject of a few 1:72 scale kits over the years, such as Hasegawa’s late 1970s release in part inspired by the defection of  Viktor Belenkno.  For a while, ICM Foxbats have ruled the roost with their excellent 1:72 scale MiG-25s, and here, we take a look at the second-generation ICM MiG-25RBT kit that has been reboxed by Revell.

The Cold War arms race was at a fever pitch in the late 1950s.  Soviet defense planners accurately gauged that their current fighters were not up to the task of intercepting the high-flying U-2 reconnaissance plane, the Mach 2+ Convair B-58, and the Mach 3+ North American B-70 Valkyrie.  This led to the 1958 requirement for an interceptor capable of reaching airspeeds up to 1,800 mph at altitudes in excess of 88,000 ft.

The Mikoyan Design Bureau started work on the new aircraft in mid-1959, and according to some sources, the North American A-5 Vigilante was its design inspiration.  It was the last plane designed by Mikhail Gurevich before his retirement.  The first prototype was designated in-house as the Ye-155-R1 and was a reconnaissance variant.  The interceptor prototype Ye-155-P1 flew in September 1964.  It was unveiled to the public in 1967 and the type began to set multiple speed and performance records, including one zoom climb that reached 123,000 feet.  The jet was given the NATO reporting name “Foxbat.”  More than 1,100 airframes were produced into the 1980s across several variants operated primarily by the Soviets, though export versions were sold to Iraq, Libya, India, Bulgaria, Syria, and Algeria.

Foxbats used large proportions of nickel steel in their construction partly because Mikoyan engineers not yet worked out titanium manufacturing to the same degree as seen in the West, and the cost of titanium was prohibitive for such a large production run.  Typical armament included four long-range R-40T/TD (NATO reporting name: AA-6 Acrid) air-to-air missiles.  The massive Tumansky turbojet engines could push the MiG-25 into a Mach 3.2 dash, but just one such speed run would fatally damage the engines.  Thus, the operational maximum airspeed was established at Mach 2.8 with an optimal cruising speed of Mach 2.3.  Maximum airframe loading was just 4.5 g, and with external stores, limited to 2.2 g.

The MiG-25 became operational in 1970 and it was a major source of consternation for Western intelligence.  Its existence shaped a number of design features of the F-15 Eagle.  The Foxbat remained shrouded in mystery until 1976 when pilot Victor Belenko defected to Japan, allowing for systematic study of his airplane before it was returned.  The MiG-25 was certainly a dangerous adversary but it was not the terrifying super-fighter that West had long dreaded.

Operationally, Soviet MiG-25s regularly performed intercepts of SR-71s, with some attempts getting closer to the Blackbird than others.  MiG-25s participated in a host of Middle Eastern wars since the 1970s including the Iran-Iraq war where Iraqi AF jets accumulated upwards of 20 kills.  Elsewhere, when faced by F-15s flown either by Israeli or American forces, Foxbats were on the losing end of air combat engagements.  Still, an Iraqi MiG-25 did down a U.S. Navy F/A-18C Hornet in Operation DESERT STORM and a Predator UAV in 2002.  Today, dwindling numbers of MiG-25s remain operational, mostly in Russian service as the sun has yet to set on the Foxbat’s 50+ year-long career.

Revell’s 1:72 MiG-25RBT is a re-boxing of the ICM Foxbat kit that contains 141 injection molded parts on five sprues and eight clear parts on one clear sprue.  The full-color instruction booklet guides the build over 64 steps.  The decals provide markings for three airplanes:

Strengths:  As I have stated on many occasions, Revell makes good decisions on reboxing other manufacturers kits in their product line.  This MiG is no exception.  ICM’s first generation of 1:72 scale Foxbat kits came out in 2008, and they were okay.  In 2018, ICM had come a long way in terms of design, tooling, and injection molding.  Their second generation 1:72 scale MiG-25 kits started to be released that year and feature much sharper detail, better fit, and better engineering.

The ICM/Revell Foxbat B features awesome surface detail – beautifully engraved recessed panel lines and rivet/fastener details, and done just right for 1:72 scale, too.  It rivals the best that out there by any other manufacturer of 1:72 scale kits, and it’s a fairly straightforward and uncomplicated kit.  Parts breakdown is simple and “traditional” – upper and lower fuselage halves, upper and lower wing halves, and so on.  No real surprises or engineering tricks.  Overall, the kit fits quite well, too, judging from my test fits of the nose and fuselage subassemblies, along with what I have informally gathered from conversations with a few past builders of the kit.  The kit’s cockpit and ejection seat details are generally really well done with great side consoles and sidewalls.  There are no surface dial details for the detail painters to work with on the instrument panel, and a decal is intended to provide those features.  Alternate decals are also provided for the cockpit side consoles.

The wheel wells and landing gear are also sharp, crisp, and appear quite accurate in form (but there’s zero plumbing; see below).  Another very nice feature is the fact that the intakes feature full intake trunks that lead to the very visible first stage compressor blades.  At the back end of those you’ll find really nice engine exhaust nozzles (I’ll never be unimpressed with how large they are!).  Trailing edge flaps, rudders, and horizontal stabilizers are all separate parts and can be positioned as desired.  The reconnaissance systems (here, camera windows represented by decals and clear plastic windows) does an accurate job of representing the RBT configuration (but again, see below).  The kit also provides the whopper centerline external fuel tank that the MiG-25 RBT needed for its extended range requirements.

The two markings options are basically identical apart from the Bort numbers and era in which the two aircraft operated.  The jet from 2012 does have some more features including recce mission markings and a slogan on the side of the fuselage, though.  The decals appear to have been printed by Cartograf and appear flawless in their print quality.

Weaknesses:  The one major drawback to the ICM tooling in this Revell box (and it’s not a huge drawback) is that the camera windows on the sides and bottom of the nose lack detail.  I’d debate with folks who say you could not do better in this scale, but here, they are a mix of details you are supposed to paint or add a clear piece of plastic to a recessed camera window surface.  Also note that there are no shoulder harnesses or lap belts provided for the ejection seat.  And as nice as the gear and gear wells are, there is zero plumbing – which is surprising.  That is, the level of detail in other parts of this kit shows ICM could have added these features if they wanted to, but alas, it’s up to the builder.  A few parts, such as the pitot tubes, were pretty badly bent on the sprues.  This looks like a mistake at the point of production (not Revell’s fault), and these parts were damaged such that replacements would be necessary.

For fans of the Foxbat, you’ve got a great basis here for a great model of the MiG-25 RBT.  And in 1:72 scale, it’s not that small, either!  There’s also a very nice range now of aftermarket sets for this kit, ranging from cockpit/ejection seat detail sets, single-piece cast resin intakes from XMM Models, airframe details from Quickboost, and more.  In other words, you can go places with this well-priced and affordable kit, whether its out-of-the-box or with as many added features as you might wish.  Either way, it looks to be the best MiG-25 RBT in 1:72 scale that is currently on the market.