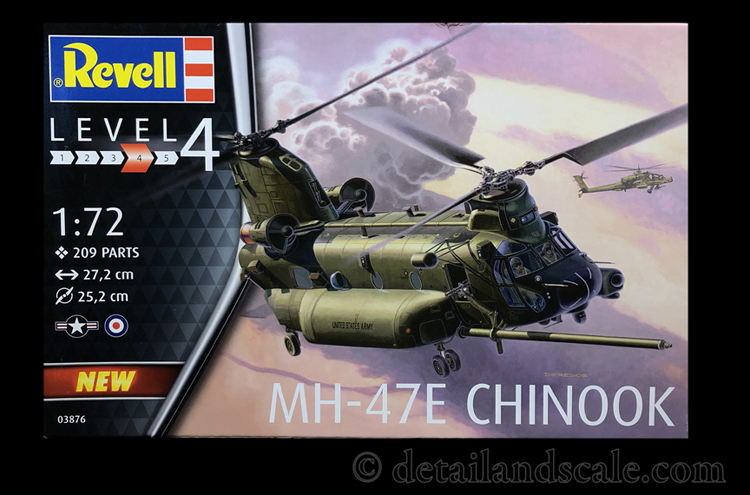 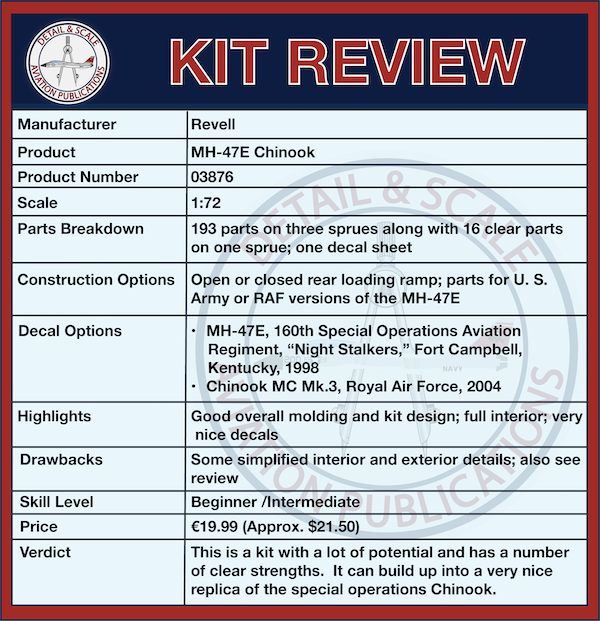 The Boeing CH-47 Chinook is a twin-engine, tandem rotor, heavy-lift helicopter whose first incarnation flew in 1961.  One of is descendants was the MH-47E, which was highly optimized for a variety of special operations work.  In this kit, Revell has released the second issue of the 2005-era boxing of their 1:72 scale MH-47E.  Let’s see what we’ve got.

In 1957 Vertol began work on its Model V-107:  a twin-engine heavy lift rotary wing design.  Nearly simultaneously, the U.S. Army was looking just such a helicopter.  In June 1958, the U. S. Army ordered a small batch of Vertol’s follow-on YHC-1A.  While the Marines purchased the YHC-1A in numbers (where it became the CH-46 Sea Knight), it turned out to not quite be what the Army needed.  Vertol responded with the Model V-114 that became CH-47A Chinook in 1962.

The CH-47 had a wide loading ramp at the rear of the fuselage and three external ventral cargo hooks to carry underslung loads.  Capable of an airspeed of just under 200 MPH, it was fast, powerful, and quite successful in various operational roles throughout the Vietnam conflict.  The significantly upgraded CH-47D entered service in 1982 and had new powerplants, avionics, flight controls, and composite rotor blades.  Today, the Chinook remains in both production and frontline service spanning a 50 year-plus service life.

The MH-47E was a highly derived Chinook variant primarily operated by U. S. Army Special Operations units.  In 1991, the first of 25 special operations Chinooks were delivered to the legendary160th SOAR(A) Night Stalkers based at Fort Campbell, Kentucky.  The MH-47E has similar baseline capabilities as the earlier MH-47D, but had a lot of specialized tricks up its sleeves to make it highly survivable on missions deep in enemy territory and during low-level flight at night and in poor weather.  The -E featured an expanded fuel capacity and in-flight refueling capability, terrain following/terrain avoidance radar, and other features used for the insertion and extraction of special operators.  The MH-47E fleet was upgraded to the even more capable MH-47G starting in 2003.

In 1995, the Royal Air Force ordered eight Chinook HC3s, which was a less expensive version of the MH-47E for the U.K.’s special operations work.  While first delivered in 2001, they did not enter service until 2008 as complex avionics issues plagued their early days.  Today, the HC3 has been upgraded to the HC5 standard that fields a digital automated flight control system.

Revell’s 1:72 MH-47E is a re-boxing of their 2005 Revell of Germany kit.  It contains 193 injection molded parts on three sprues and 16 clear parts on one clear sprue.  The full-color instruction booklet guides the build over 68 steps.  The decals provide markings for two special operations Chinooks:

Strengths:  This kit has a number of nice things going for it.  While I am not a MH-47E subject matter expert, it very much passes the “eyeball test” and appears to capture well the lines, shapes, and overall configuration of this highly specialized Chinook.  These include its many other specialized gear including the nose-mounted FLIR turret, refueling probe, and a veritable constellation of antennas and sensors arrayed all around the airframe.  Exterior surface details feature recessed panel lines (though see below).  Molding quality is excellent.

Of note:  for the Night Stalkers version of the kit, you do indeed need to cut away (preferably, using a razor saw) the side sponsons on the left and right fuselage halves and replace them with Parts 60 and 61 that represent the significantly enlarged and differentially-shaped sponsons (filled with lots more gas) seen in the U. S. version.

The kit provides a full interior (though a bit basic; again, see below) that is pretty good for 1:72 scale.  There’s a decent instrument panel and center console, but buttons are varyingly over-scale and there’s no dial detail, so it is best to sand that part flat and just use the kit-provided decal or something from the aftermarket world.  The pilot and co-pilot seats are decent and include molded-on shoulder harnesses and lap belt details.  The sticks, collectives, and rudder pedals are also all there.  The aft cargo bay (which makes up most of the internal volume of the MH-47E) is there and you can position the aft ramp up or down.  Parts are also provided for the left and right forward door gunners and their miniguns.  The rotorheads also look very nice, as do the rotor blades which appear to have been molded with a bit of an appropriate droop (curvature).

The decals were printed by Zanchetti and look fine in terms of printing quality, color, and register.  They include markings for both U. S. Army and RAF versions, with each sharing a significant range of stenciling.  Anti-skid walkways are also provided as are decals for various intake screen meshes.

Weaknesses:  A few things to note:  the interior is nice but it is simplified overall.  Eduard produces a few sets for this kit and they can really improve the fidelity of detail in this kit.  The miniguns and their ammo shell chutes are also simplified, and the guns themselves end in a featureless, solid cylinder that represents the gun muzzle.  I also think those guns are fitted with flash suppressors, so the shape is okay but the muzzle detail is missing.

There are very significant and obvious ejection pin markings throughout the inside surfaces of the fuselage.  These will be visible if you have the cargo ramp down.  It will take some work to fill in those defects.  There are a few different depths and widths for the recessed panel lines, from finely recessed lines to a few engine access panels and the starboard side crew door that would be over-scaled (too deep and too wide) for a 1:32 scale kit.  The contrasts will be a little jarring for some folks.  You will also notice that many of the sprue gates that connect to the parts are really quite big.  This was arguably acceptable for kits produced in the early-to-mid-2000s, but some additional clean-up will be necessary when compared to today’s latest kits.

Overall, Revell’s re-issue of their 1:72 scale MH-47E has a lot of potential.  On its own, it can build up into a very nice replica of the special operations Chinook.  For the detail-oriented scale modeler, I do recommend whatever aftermarket detail parts you can use, and they will definitely bring out the even greater promise of this kit.  Helicopter modelers, fans of special operations aircraft, and builders of U. K. subject matter will want to get this kit, especially at this affordable price.

Overall, Revell has done a great job with their 1:72 scale Shackleton MR.3, and I think it edges out the very nice Airfix kit to be considered the best of its kind in this scale.  Fans of RAF, Cold War-era, and maritime patrol subject matter will certainly enjoy this issue of the kit, and its overall quality, nice detail, and unique subject matter extends a pretty broad invitation to a wide range of scale modelers.