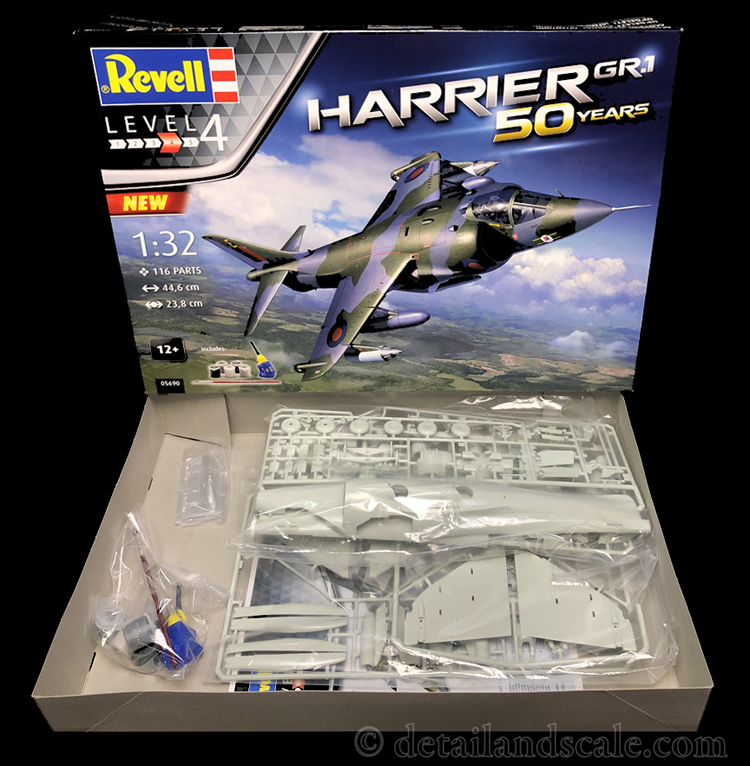 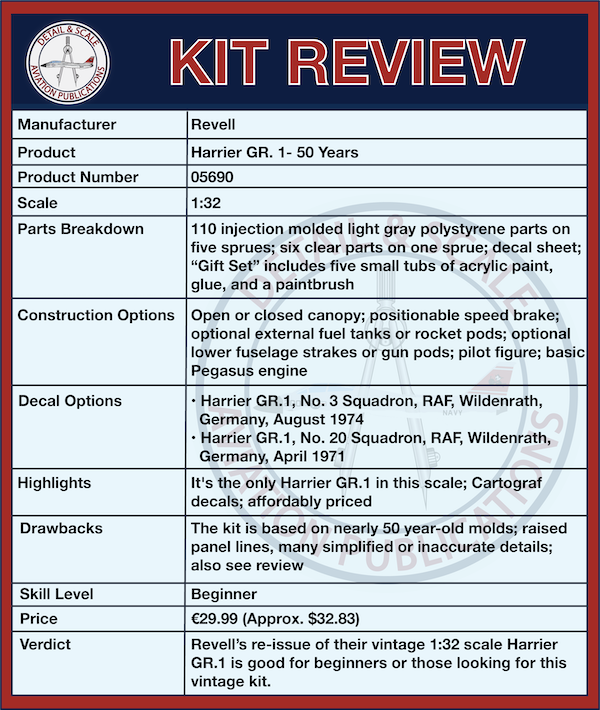 The Harrier is one of the best-known aircraft of the latter 20th century.  It was the first operational combat aircraft with vertical takeoff and landing ability.  While the Harrier is today in the twilight of its distinguished career with the U. S. Marine Corps, kits of the Harrier are prolific.  In 2019, Revell marked the 50th anniversary of the Harrier’s operational debut.  They dusted off nearly 50 year-old molds with a re-issue of their original 1:32 scale Harrier GR.1 but included new decals and a five-color paint set, some glue, and a paintbrush.  Let’s check it out.

During the Cold War, the prospect of a European theater-wide thermonuclear war meant that large airbases with long runways were particularly vulnerable to complete annihilation.  The development of directed thrust jet engine designs in the late 1950s opened up the prospect of aircraft that could be achieve vertical/short takeoff and landing (V/STOL) capability.  Such a capability would allow operation from dispersed, decentralized, and otherwise unimproved settings to mitigate the risk of nuclear attack on force strength.  This line of thinking underscored the genesis of the Hawker Siddeley Harrier in the 1960s.  The Harrier eventually spawned some 36 variants and had a distinguished combat career, from the Falklands to Afghanistan.

The first generation of the Harrier was the RAF’s Harrier GR.1/GR.3, which earned its fame as the world’s first operational close air support and attack aircraft with V/STOL capability.  On 18 April 1969, the Harrier GR.1 officially entered service with the RAF.  The British Aerospace FRS.1 and FA2 Sea Harriers were developed for the Royal Navy’s Fleet Air Arm and operated between 1980 and 2006.  Other variants included the AV-8A and AV-8B flown by the Unites States Marine Corps.  Later, McDonnell Douglas and BAe developed “second-generation” Harrier IIs beginning in the mid-1980s leading to variants such as the AV-8B+ and the GR.7 and 9.  The last of the British Harriers were retired in 2010 but the type continues to fly on with the U. S. Marine Corps.

The Revell 1:32 scale Harrier GR.1 – 50 Years kit contains 110 light gray injection molded parts on five sprues and six clear parts located on one clear sprue.  The instruction booklet is printed in color and assembly is detailed over 44 steps.  The markings come on a single Cartograf-printed decal sheet for the following two airplanes:

Strengths:  Good bottles of wine are often considered “vintage.”  This kit is “vintage” plastic, but unlike wine, I cannot say that it has aged well.  It’s not what we’re used to as scale modelers for about three decades.  That said, you can think of this in terms of being a blast from the past and an earlier era of our hobby.  It reminds me of Monogram’s Selected Subjects release program that reintroduced of classic kits into the 1990s-era scale modeling market.  I’d say this kit is quite good for beginners.  If building a cherished vintage kit or taking on entry-level 1:32 scale subject matter happen to be what a scale modeler is looking for, this is your ticket.  I also know two people who have built other incarnations of this kit and used it as the basis to do a lot of super-detailing.  After all, it is the only 1:32 scale Harrier GR.1 that has ever been produced.

Overall shape is good and quite accurate.  The decals are of excellent quality.  External stores options include two 100-gallon external fuel tanks and two 155 mm Matra rocket pods.  There are alternate gun pod or fuselage strakes for the bottom of the fuselage.  A pilot figure is included.  There’s a basic Pegasus engine as well, though the Harrier’s mighty powerplant just about all disappears inside the completed model.  Connecting rods inside the engine allow the forward and rear engine nozzles to rotate together.

Weaknesses:  Panel lines are all raised, and no rivet and fastener details are present.  Parts and sprue gates are all pretty thick.  The cockpit is very poor.  The instrument panel is flat (though a good decal provides all the detail there) and the side consoles are very low and feature almost no detail.  Consulting my Harrier references, I can say that what’s represented here is basically fictious.  The same can be said for the ejection seat.  It is highly inaccurate.  The depth of the intake seems to be foreshortened.  The auxiliary air intake doors are molded integrally to the aft intake cowls and are in the “closed” position.  Landing gear shapes are basically correct but simplified.  There are no gear well details (and no gear wells at all).  The nose and main gear plug into the bottom surface of the fuselage.  The wheels are designed to roll, which is a toy-like feature not uncommon to 1960s and 1970s era kits.  The quality of the clear parts is not great and they are thick and distortive.  As the molds are pretty old now, there’s flash here and there.

The “gift set” portion of the kit includes some glue, five bottles of a medium-quality acrylic craft paint, and a #2 round paintbrush.  The brush was smashed up against the inside of its bag and was ruined – unusable.  The glue is akin to Tamiya Thin (smells like toluene or a related compound).  The paint is quite thick (not something that could be airbrushed), and I’d hope there’s enough of each color to cover this big Harrier.  These plastic tubs of paint are pretty small.

Revell’s Harrier GR.1 – 50 Years kit celebrates the 50th anniversary of the Harrier’s entry into RAF service with plastic that is about the same age. It is well priced. If you’re looking for the only Harrier GR.1 in this scale, an introductory-level large-scale kit, or to reconnect with a memory of a build from your past, Revell has you covered here.

Sincere thanks are owed to Revell for the review sample. You can find them on the web at http://www.revell.com/germany.