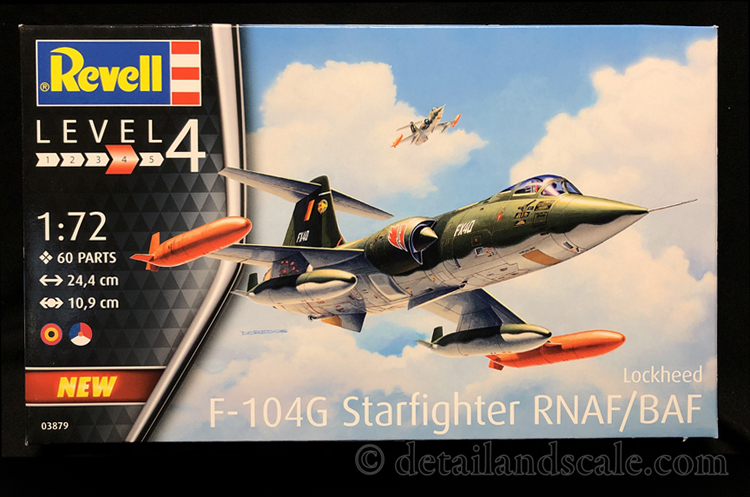 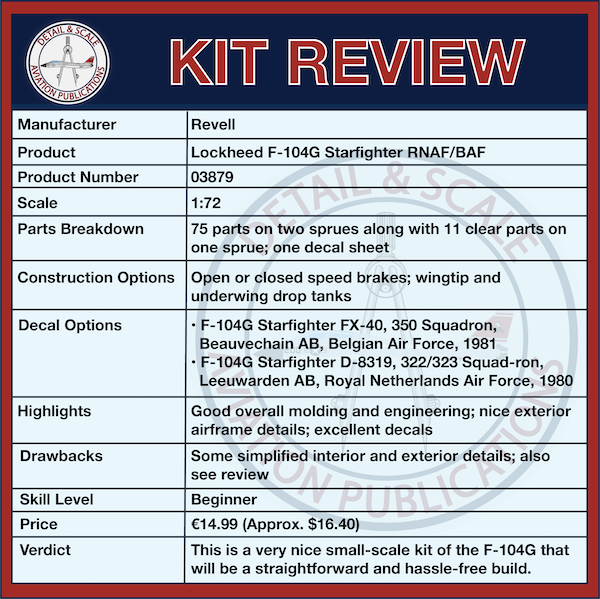 The Lockheed F-104 Starfighter was an aircraft in a class of its own, defined by an innovative and sleek design, high speed, and a relatively legendary reputation drawn from its status as a multiple world record holder.  There have been lots of kits of the “Missile With a Man in It” and here, we take a look at the most recent reissue of Revell’s 1:72 scale 1995-era tooling that features new decals for a pair of Dutch and Belgian F-104Gs.

The F-104 was one of the early “Century Series” aircraft that applied lessons from the Korean War to early jet fighter design.  The legendary Kelly Johnson and his team created the lightest, most aerodynamically efficient airframe combined with a single powerful engine (in this case, the General Electric J79).  Less than a year elapsed between contract finalization and first flight, with the prototype taking to the air on March 4, 1954 at Edwards AFB.  Its high tail, unusually thin mid-fuselage-mounted trapezoidal wings, and low drag conferred Mach 2+ performance.  Between 1958 and 1977, F-104s set multiple speed, altitude, and time-to-climb records.

Originally conceived as a fighter and interceptor, the F-104 was a venerable aircraft.  Yet, its turning performance, propensity for high-alpha stalls, limited missile carriage, and growing mishap record were generally seen as problems.  Following service in the USAF’s Air Defense Command, F-104s went to work in TAC (with deployments during the early days of the Vietnam War) and later in stateside ANG squadrons.  The last F-104 in U. S. service hung up its spurs in 1975 when the Puerto Rico ANG transitioned to the A-7.  However, the F-104 was exported to many European nations including The Netherlands and Belgium.  They were both key NATO Starfighter operators until the F-104 was finally were replaced by the F-16 in the 1980s.  Italy retired the last operational Starfighter anywhere in 2004, ending a remarkable service life of 50 years.

The F-104G was arguably the ultimate Starfighter.  Later 104s were made (such as the -J, -N, and -S variants), but they were all derived from the -G in one way or another.  The G model was a multi-role fighter-bomber.  A total of 1,122 F-104Gs were manufactured by Lockheed and under license by Canadair, and with a consortium of European companies between Messerschmitt/MBB, Dornier, Fiat, Fokker, and SABCA.  F-104Gs featured strengthened fuselages and wings, increased internal fuel, an enlarged vertical stabilizer, stronger landing gear with bigger tires, and revised flaps for improved maneuvering.  F-104Gs also featured a new radar with an early combination of air-to-air and air-to-ground modes and a new INS system.

Revell’s 1:72 scale F-104G kit consists of 75 injection molded parts on two sprues and 11 clear parts on one sprue (the count of 60 parts on the box top appears to be a little off).  The full color instruction booklet guides assembly over 30 steps.  Decals provide markings for two European F-104Gs:

Strengths:  Revell of Germany (and now, it’s just Revell) released the first version of this kit based on this tooling in 1995.  I remember when it was still a hot new item when it came through the hobby shop I was working in.  For a small 1:72 scale kit, it’s indeed nicely detailed.  The kit features what appear to be spot-on shapes and proportions, very nice recessed panel lines, and a good level of detail in this scale (though see below).

The parts breakdown is straightforward and it will be a relatively simple, hassle-free build.  The cockpit, wheel wells, landing gear, intakes, and afterburner nozzle interior are nicely done.  The instrument panel has raised relief but decals are intended to represent all the instrument panel dial details.  I am usually hesitant to use decals for any instrument panel, but here, I think the decals work since they are finely printed and have a lot of detail.  You get a pair of early generation AIM-9s (I’d argue these are AIM-9Bs but the Sidewinders are not used in this version of the kit), wingtip fuel tanks, and under wing drop tanks.  Construction options are pretty limited, but the speed brakes can be positioned open or closed.  While the panel for the cannon access bay is a separate part, there’s nothing included in the kit to go in there.

The choice in paint schemes are very cool, and Revell is clearly marketing this issue to their European customers.  These are two classic schemes from the BAF (love those orange wingtip tanks!) and what was effectively a splinter scheme flown on the Royal Netherlands AF F-104s. The decals were printed by Cartograf and are exceptional, from their vibrant colors, great print quality, and highly restrained carrier film.  The decal sheet might be physically small, but don’t let that fool you.  There’s a ton of seriously great stencil detail that will add a lot to the final look of the completed model.

Weaknesses:  It’s too bad the windscreen and canopy are a single part and that the canopy cannot be positioned open with some cutting.  The clear parts were not bagged separately and therefore placed with the sprues; and the canopy in my review copy of the kit was lightly but extensively scratched.  Look out for a pair of pesky ejection pin markings on the roof of the nose gear well.  And while the overall wheel well and speed brake well detail is okay for 1:72 scale, it’s also a bit basic and could benefit from some extra detailing.  The Martin-Baker ejection seat features some very unrealistic shoulder harnesses and it is missing lap belts entirely.   The face curtain ejection handles are also shaped a bit oddly.  I recommend spending a few bucks for a cast resin aftermarket seat and you will have a major improvement over the kit parts.  I would also say that the surface details of the airplane are a bit simplified, as there is minimal rivet detail and other rivet details that are missing.

It’s great to see this latest issue of the Revell 1:72 scale F-104G in classic Belgian and Dutch markings.  It’s a solid little kit that is indeed comparable to the Hasegawa family of Starfighters in this scale, though I do rank the Hasegawa kit as the more detailed of the two.  If you have reason to seek an alternative to the Hasegawa kit, this is a fine choice with clear value.