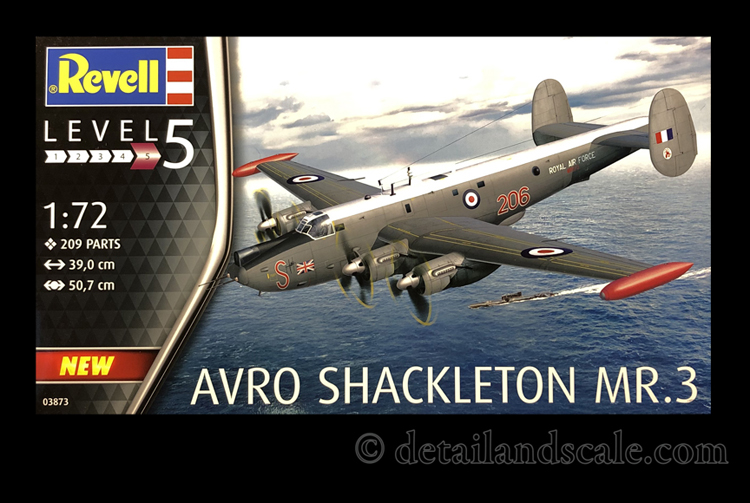 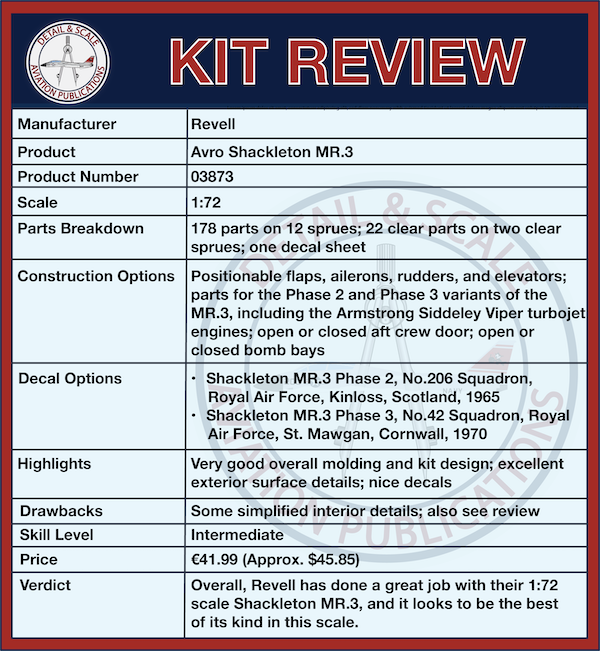 The Avro Shackleton was a British long-range maritime patrol aircraft used by the Royal Air Force (RAF) and the South African Air Force (SAAF).  The Shackleton had a long career as sub-hunter and was first developed during the late 1940s as part of the U. K.’s response to the rapid expansion of the Soviet submarine fleet.  In 2016, Revell released the first of their new-tool injection-molded Shackleton kits in 1:72 scale.  In late 2019, the second issue in their of the Shackleton family arrived with new parts and markings for the MR.3 variant.  Let’s check it out.

As the Cold War burgeoned in the late 1940s, it was clear that the growing Soviet submarine force posed a major threat to the West and to the British Isles specifically.  Avro drew upon their Lincoln bomber design (itself a derivation from the Avro Lancaster) to produce the Shackleton for the anti-submarine warfare (ASW) mission.  In April 1951, the Shackleton entered service with the RAF in ASW and maritime patrol roles, though sometimes it was also employed in search-and-rescue (SAR) and other duties a necessary.

The Shackleton was built around the ASV Mk 13 radar that could detect a destroyer at a range of 40 miles, a surfaced submarine at 20 miles, and a submarine’s conning tower at eight miles.  The airplane also employed electronic warfare systems and a diesel fume detection system (though it was well known as being prone to false alarms).  A camera bay housed several cameras used for low/medium altitude and nighttime photography.  Stores carried included up to nine unguided bombs, three homing torpedoes or depth-charges, sonobuoys, and for self-defense, two 20 mm cannons in a dorsal turret.

The MR.3 was a maritime reconnaissance and anti-shipping specialist.  It featured a tricycle landing gear configuration, a new nose entrance hatch, and wingtip fuel tanks.  The cabin was further sound proofed and reconfigured to improve crew comfort.  It entered service with the RAF’s 220 Squadron in August 1957.  A total of 34 MR.3s were delivered to the RAF and another eight went to the SAAF.  The MR.3 underwent three major upgrades.  The Shackleton MR.3 Phase 1 featured a variety of enhancements to internal systems.  The Shackleton MR.3 Phase 2 was fitted with an improved ECM suite and radios.  The Shackleton MR.3 Phase 3 saw the addition of two Armstrong Siddeley Viper turbojet engines at the rear of the outboard engine nacelles.  The wing main spar was accordingly strengthened and navigation systems also were upgraded and the operator stations were expanded.  By the 1970s, the Hawker Siddeley Nimrod came on the scene, and the Shackleton became increasing obsolete and was phased out.

Strengths:  The Shackleton has long been a neglected subject.  Revell’s principle competition is the new tool 1:72 scale Airfix kit.  That kit is very well done (and see our review of the Airfix Shackleton AEW.2 kit HERE) but I think there may be even more to like with the Revell kit.

The quality of the Revell kit is overall quite high.  The molding looks great, and here’s one area where this Shackleton beats out the Airfix kit:  exterior surface detail.  The Airfix kit has fairly large (wide for the scale) recessed panel lines and no rivet detail to speak of.  The Revell kit has gorgeous and very rich surface details, with panel lines that are more appropriately narrow and in-scale.  The Revell kit also has eye-watering rivet/fastener detail.  Also, I test fit the wings and fuselage and found a virtually airtight fit.  There are also two main wing spars that extend out from the mid-fuselage and will help ensure proper wing alignment and a strong support for the large wings themselves.

Construction options include positionable flaps, ailerons, elevators, and rudders.  Bomb bay doors can be open or closed, and the aft crew door can be opened or closed.  Parts for the standard engines of the Viper powerplant-equipped MR.3 Phase 3 are provided, and optional parts are provided for open or closed engine cowling doors.

The Revell Shackleton cockpit is overall really nicely done for 1:72 scale, and the instrument panel may be painted or is represented by an optional decal.  The midsection interior is absent, and the interior picks up with the aft fuselage station.  Even though very little of that interior will be visible in the completed model, it is rather well done as injection molded parts.
Turning back to the exterior, the props, engines, and engine cowlings look good, and the main gear wells, main gear, and bomb bays are very well done.  The major details are all there, and the builder certainly can add any plumbing and wiring if they wish.  The kit also supplies parts to replicate the veritable farm of antennas that can be found from nose to tail.

The two markings options are similar.  The Shackleton never carried particularly high-visibility colors, and both markings options feature an overall dark sea gray scheme with a white upper fuselage.  The first markings option is however the most colorful, and the decals provide some color to contrast with that canvass, from roundels to underwing ID numbers and the very complete and colorful airframe stencils/walkway markings.  The second option is more subdued.  The decals themselves look to have been printed by Zanchetti and are about perfectly printed.  The carrier film is quite thin.

Weaknesses:  I cannot offer any substantive critiques of this kit.  Only a few minor observations come to mind.  Crew seats have belts represented by decals (reflecting my own personal bias on belts, decals are never good for the task).  One look at the completed model suggests to me that it could be a tail-sitter, but the instructions do not seem to suggest adding weight to the nose.  Adding some weight could be a good idea.  A little ordnance for the bomb bay could have added a nice touch, but no weapons are included in the kit.  Also, keep an eye out for some ejection pin markings on the fuselage and gear well interiors.

Perhaps my biggest gripe is the box.  Revell has long had an affinity for these thin-walled, side-opening boxes. By virtue of their design, they are mechanically weak.  The shipping box took at least one bad hit while on its way to me, and the Shackleton kit box was both crushed and torn on the sides.  Fortunately, the plastic was fine, and the decal sheet was only badly bent.  Still, a different type of box could have prevented this kind of crush damage.

Overall, Revell has done a great job with their 1:72 scale Shackleton MR.3, and I think it edges out the very nice Airfix kit to be considered the best of its kind in this scale.  Fans of RAF, Cold War-era, and maritime patrol subject matter will certainly enjoy this issue of the kit, and its overall quality, nice detail, and unique subject matter extends a pretty broad invitation to a wide range of scale modelers.