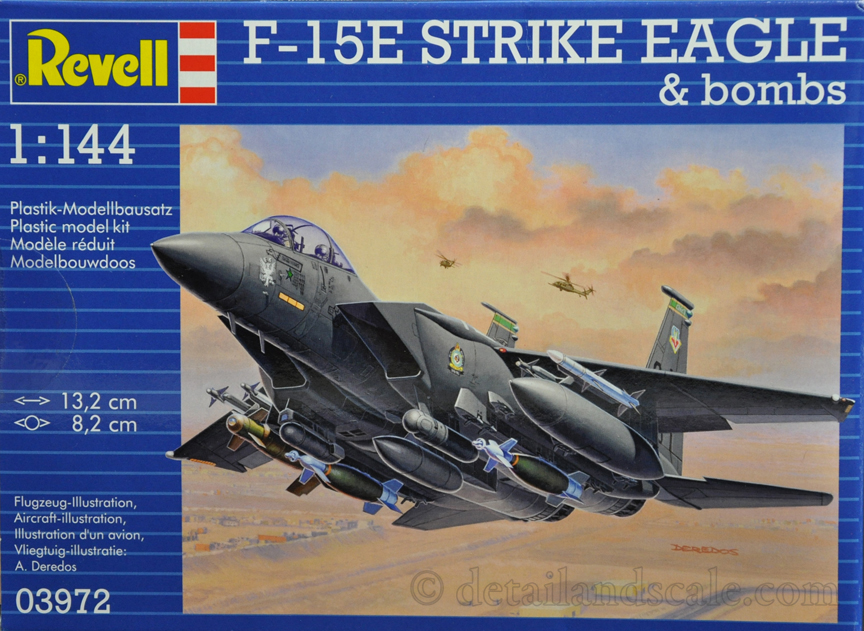 In this review, we have a look at the new F-15E Strike Eagle kit from Revell of Germany. They’ve taken the legendary ground-attack aircraft and shrunk it down to a diminutive 1:144 scale, and this time, they’ve provided a new sprue with some air-to-ground ordinance to load out your Eagle jet.

When the F-15 Eagle was developed from the lessons of the Vietnam war, significant philosophical and engineering effort was aimed at the Eagle to make it the most potent air superiority aircraft in the world. During those early days, the phrase, “Not a pound for air-to-ground,” was coined in the Systems Program Office (SPO) at Wright Patterson AFB.  And with the F-15’s current air-to-air kill ratio of 104-0, that effort certainly paid off.

Still, McDonnell Douglas marketed the idea of an F-15 carrying bombs even in the 1970s. By the early 1980s, development work on the F-15E Dual Role Fighter began, and the first F-15E flew in December 1986.  The Strike Eagle first achieved fame during the 1991 Gulf War, employing its then-unique navigation and targeting pod system, coupled with with its long range, high speed, and precision-guided bombs. The F-15E has been continuously upgraded, and has played crucial roles in every U.S. conflict since then.  Export versions of the Strike Eagle are currently operated by Israel, Saudi Arabia, and Singapore.  The F-15E will no doubt remain a mainstay of American air power for many years to come.

In 2015, Revell of Germany (RoG) released their second 1:144 F-15E kit.  Their first offering of the 1:144 F-15E was in 2005 - a Tiger Meet-marked F-15E, but it lacked the LANTIRN pods and any form of munitions.  Here, the basic kit is the same, but a new sprue has been included with that which was missing last time (more on this below). The kit is comprised of 71 grey injection molded parts on five small sprues and two clear parts (a separate windscreen and canopy) on its own sprue. Overall, the kit parts are very crisply molded, and nearly all the panel lines (as I know them) on the F-15E are well represented, executed, and recessed.  The shape and size the airplane look spot-on. There’s even parts that represent the first-stage compressor blades so that one can look down the intakes and see what’s supposed to be there.   The decals cover just one F-15, but it’s a good choice: F-15E 89-0487, marked as it was deployed to Bagram Air Base, Afghanistan in January 2013 and was the first F-15E to reach the 10,000 flight hour milestone. 487 was the same airplane that creatively splashed an Iraqi Mi-24 using a GBU-10 laser guided bomb during Operation Desert Storm.

Strengths:  For a 1:144 scale model, this kit represents excellent quality and very good fit. Even the cockpit with its good (and very small) instrument panel decals will build up nicely. All of the external stores look very good (with one exception; see below). The missile bodies of the AIM-9s are probably one of the most delightfully delicate looking pieces of injection molded plastic I have ever seen.

Weaknesses: Several points can be raised that lead to small scale nitpickery, indeed. The panel lines on the horizontal stabilizers look oversized and too wide. In fact, I think these should be raised stiffeners. The afterburner nozzles are rather inaccurate, though admittedly, casting such fine structures in plastic is technically rather difficult. The decals are generally okay, but the more complex, multi-color decals such as the squadron and TAC badges are “fuzzy” and maybe even a little out of register - even for 1:144 scale.  The decal sheet does have yellow decal stripes for the bombs and missiles (a very good touch – thank you, RoG!). Yellow on munitions denotes the presence of a live warhead on the round, but the decals for the aft brown stripes on the Sidewinders and AMRAAMS (brown denotes the presence of a live rocket motor in a missile body) is positively red in color. It’s a small but obvious mistake. Also, use some care when applying these decals.  Printed in Portugal, they appear to use the same kind of very thin and fragile decal film that came with some Hasegawa kits in the 1990s. Perhaps consider adding a little liquid decal film to each before application – just to be on the safe side. This will reinforce the tensile strength of the decal, making it harder to rip or splinter.

Something looked a little off regarding the GBU-15s, and an Internet search turned up some research that concluded that all the fins are both misshapen and too small.  This is frankly a mistake that virtually no one would ever notice on the built model. Perfection-minded scale modelers can correct this easily by making new fins out of plastic card.

If you’re looking to build a small Strike Eagle, look no further. This kit will build up into a very solid, small-scale replica of the F-15E. If a modeler is looking to go even further with detailing this kit, Zactomodels (http://www.zactomodels.com/) offers superdetailed resin-cast ACES II seats and engine nozzles that correct/enhance the level of detail when compared to the kit parts.

Many thanks to Revell of Germany and Volker Vahle for the review sample.