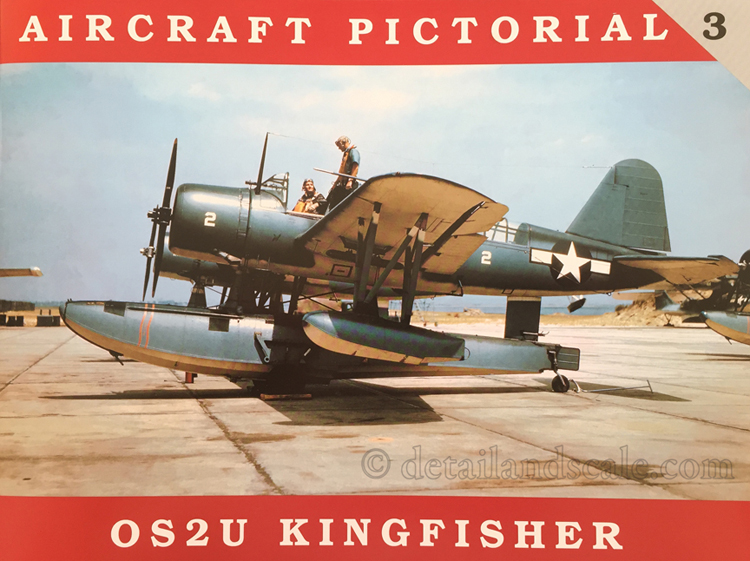 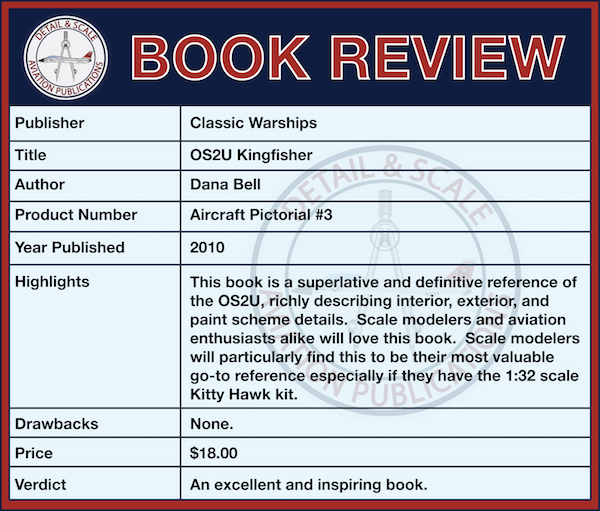 One of the most important U.S. Navy airplanes of the Second World War never operated from an aircraft carrier, dropped torpedoes, or sank anything.  Instead, the catapult-launched OS2U Kingfisher was the Navy’s principal light scout aircraft during most of the war, and it played key roles in reconnaissance, observation, and search-and-rescue.  At detailandscale.com, we recently reviewed Kitty Hawk’s 1:32 scale kit of the Kingfisher. Here, we’ll take a look at Dana Bell’s 2010 book OS2U Kingfisher, which looks like a definitive reference for scale modelers and aviation enthusiasts alike.

Dana Bell’s OS2U Kingfisher is a softcover book in 8.5” x 11” format, with pages printed on glossy paper, and t he print quality is first rate.  The book is rich with detailed written narratives, captions, and a wealth of visual information.  The text and captions are well written and edited, and the writing style is both concise and highly informative.  A main body of text opens the book, summarizing the history of the design requirement, production, and deployment of the OS2U.  Thorough attention is also paid to the evolution of Kingfisher colors and markings, from the early days of aluminized lacquer and yellow wings to the sea blue camouflage schemes worn throughout the war.

The wealth of archival photos and original Vought engineering drawings in this book take readers all the way back to the late 1930s starting with coverage of the XOS2U-1.  Excellent and detailed coverage of production aircraft airframe details and structure follows, from floats, beaching gear, flap and spoiler configurations, the powerplant and engine accessory bay, and even the experimental “Zap flaps” configuration.  Cockpit (both fore and aft) configuration photos are extremely thorough and leave no area uncovered.  Though the cockpit photos are of an OS2U-1, the basic configuration never changed, and the elements that did, such as the unarmored “Type A” and armored “Type B” pilot’s seats that also contained different restraint configurations, are carefully illustrated.  Aft cockpit details, such as the flexible mount for the .30-calibre machine gun, the use of bungee cords to stow the gun, and aft cockpit armor plating modifications are illustrated using original photos and Navy tech manual diagrams.

Kingfishers flew with two types of floats and beaching gear.  One was the original Vought factory-designed floats which were eventually phased out in favor of the EDO main and wingtip float design.  By the time the OS2U-3 was in production, EDO floats were standard, and the subtle and not-so-subtle differences between the factory and EDO floats and associated beaching gear are demonstrated clearly in the book.  Other photos detail the fixed landing gear that could be alternatively fitted to the Kingfisher when the floats were removed.

Colors and markings of the Kingfisher are covered in both color illustrations and a wide variety of additional in-action photos of OS2U operations.  Dana Bell considers three of these to be the best combat photos ever taken of the OS2U, and I cannot disagree!  One of the more intriguing and lesser-known markings variants were overall white and gray-over-white antisubmarine schemes flown on some East Coast inshore defense squadrons.  Of significant note: there are no known surviving specification drawings for Kingfisher graded camouflages, but Dana Bell’s meticulous reconstruction of these paint schemes from small schematics and BuAer’s written instructions are invaluable.

Previously, I understood that the OS2U variants were externally virtually identical apart from the two float variants.  However, Dana Bell uncovered extremely subtle production variations, including a slightly different windscreen introduced on the OS2U-3 ( which were retrofitted to earlier variants when needed beginning in 1942) and an IFF whip antenna that was added to all Kingfishers beginning in 1943.

I can find no shortcomings in this book.

Dana Bell’s OS2U Kingfisher book is a superlative volume on this aircraft.  As with all of Dana Bell’s work, it is engaging, impeccably researched, and immensely informative.  Fans of naval aviation of all eras will find this book to be a cherished reference, and scale modelers will need no other reference, regardless of the scale or kit of the Kingfisher they choose to build.

You can find OS2U Kingfisher available at amazon.com, hopefully at your local hobby shop, and at Classic Warships website (http://www.classicwarships.com/) where you can also browse their other titles.