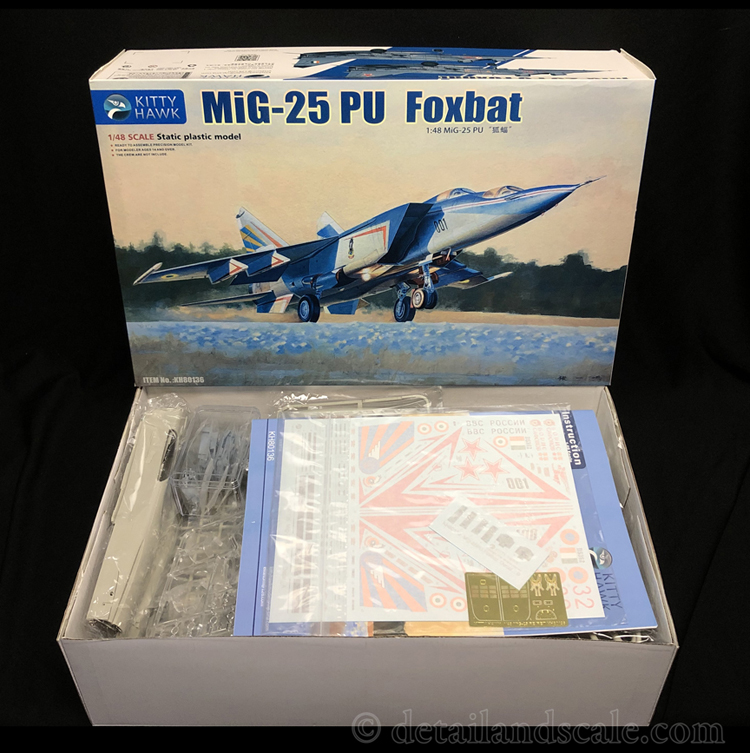 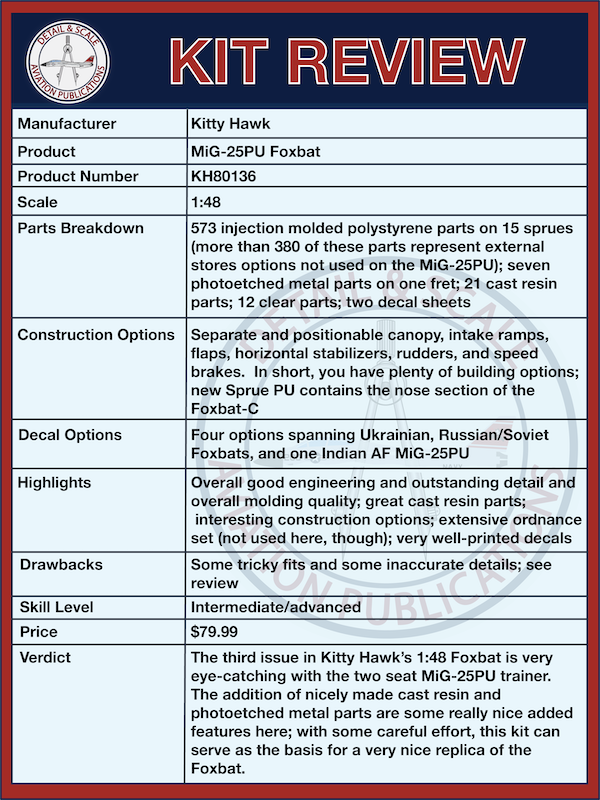 In the light of history, the MiG-25 proved to be an extraordinary aircraft and a signature achievement of Soviet aircraft engineering.  It was among the fastest and highest-flying airplanes in history – and is still in operation today.  The MiG-25 has also been the subject of a few 1:48 scale kits over the years, such as Revell’s long-lived 1977-era kit and more recent new tool kits from ICM and Kitty Hawk.  A sample of Kitty Hawk’s third MiG-25 kit, which represents the PU trainer variant of the Foxbat, recently arrived on our review bench.  Let’s take a look at this very unique variant of the famous Foxbat.

The Cold War arms race was at a fever pitch in the late 1950s.  Soviet defense planners accurately gauged that their current fighters were not up to the task of intercepting the high-flying U-2 reconnaissance plane, the Mach 2+ Convair B-58, and the Mach 3+ North American B-70 Valkyrie.  This led to the 1958 requirement for an interceptor capable of reaching 1,800 mph at altitudes in excess of 88,000 ft.

The Mikoyan Design Bureau started work on the new aircraft in mid-1959, and according to some sources, the North American A-5 Vigilante was its inspiration.  It was the last plane designed by Mikhail Gurevich before his retirement.  The first prototype was designated in-house as the Ye-155-R1 and was, in fact, a reconnaissance variant.  The interceptor prototype, the Ye-155-P1, flew in September 1964.  It was unveiled to the public in 1967 and the type began to set multiple speed and performance records, including one zoom climb that reached 123,000 feet.  The jet was assigned the NATO reporting name “Foxbat.”  More than 1,100 airframes were produced into the 1980s across several variants operated primarily by the Soviets, though export versions were sold to Iraq, Libya, India, Bulgaria, Syria, and Algeria.

Foxbats used large proportions of nickel steel in their construction partly because Mikoyan engineers not yet worked out titanium manufacturing to the same degree as seen in the West, and the cost of titanium was prohibitive for such a large production run.  Typical armament included four long-range R-40T/TD (NATO reporting name: AA-6 Acrid) air-to-air missiles.  The massive Tumansky turbojet engines could push the MiG-25 into a Mach 3.2 dash, but just one such speed run would fatally damage the engines.  Thus, the operational maximum airspeed was established at Mach 2.8 with an optimal cruising speed of Mach 2.3.  Maximum airframe loading was just 4.5 g, and with external stores, limited to 2.2 g.

The MiG-25 became operational in 1970 and it was a major source of consternation for Western intelligence.  Its purported “super-fighter” status shaped a number of design features of the F-15 Eagle in response.  The Foxbat remained shrouded in mystery until 1976 when Victor Belenko defected to Japan in his Foxbat. This allowed for systematic study of his airplane before it was returned.  The MiG-25 was certainly a dangerous adversary, but was not the extraordinary super-fighter that West had long dreaded.

Operationally, Soviet MiG-25s regularly performed intercepts of SR-71s, with some attempts getting closer to the Blackbird than others.  MiG-25s also participated in a host of Middle Eastern wars since the 1970s including the Iran-Iraq war where Iraqi AF jets accumulated upwards of 20 kills.  Elsewhere, when faced by F-15s flown either by Israeli or American forces, Foxbats were on the losing end of all air combat engagements.  The only exceptions were Iraqi MiG-25s that downed a U. S. Navy F/A-18 Hornet in Operation DESERT STORM and a Predator UAV in 2002.  Today, dwindling numbers of MiG-25s remain operational, mostly in Russian service as the sun has yet to set on the Foxbat’s 50+ year-long career.

The MiG-25PU was a trainer.  They were all conversions of the single-seat, all-weather interceptor, the Foxbat-A.  This version had a new nose section with a unique and very distinctive staggered cockpit for a student pilot and an instructor pilot. They had two separate cockpits, no radar, and lacked all combat capability.  NATO designated the MiG-25PU as the Foxbat-C.

Kitty Hawk’s 1:48 MiG-25PU Foxbat-C kit contains 573 parts on 15 sprues (139 parts build into the airplane and the remainder are all parts for external stores), 12 parts on a single clear sprue, 21 cast resin parts, seven photoetched parts on one fret, and two decal sheets.  The instructions play out over 19 steps, and markings for five MiG-25PUs are included:

Strengths:  This is Kitty Hawk’s third 1:48 scale MiG-25.  This kit is mostly based on their 2013 new-tool Foxbat release but there’s a range of new parts here as well.  Much of the plastic is common to that early-generation Kitty Hawk kit and the more recent MiG-25 RB/RBT Foxbat-B.  It has some areas of concern to keep in mind during the construction process (see below).  Since most of this kit has been around for some time, it is likely familiar to many readers.  But to recap, the kit features a fairly high level of recessed panel line and fastener/rivet detail.  Molding is crisp and there’s no flash anywhere.  It has a relatively decent cockpit and ejection seats (with photoetched metal belts provided) but the instructions ignore those and just describe the resin cockpit assembly process.  There’s also a separate and positionable canopy, intake ramps, flaps, horizontal stabilizers, rudders, and speed brakes.  In short, you have plenty of building options.

Sprue PU containing all the new parts for the Foxbat-C is new, and it contains the extended and lowered nose section of the trainer version, a second cockpit tub, and an ejection seat.  Sprue GP also has the second canopy as well.

Other new parts here include the resin items in the kit.  Among them are parts for a complete forward and rear cockpit, two ejection seats, the instrument panels and instrument panel coamings, and two pilot figures: the student and his IP, both wearing some serious Soviet-era pressure suits and astronaut-style helmets.

Single-piece landing gear are also provided, and they are quite detail-rich.  The more I look at them, the more I like them!  Further, these cast resin landing gear are cast around a solid metal core, so they will bear the weight of the completed model.  Kitty Hawk’s resin parts design and casting is up there with the best of them.  Quality is excellent and detail painters will love the “canvas” they have with the cast resin cockpit parts.  The photoetched metal parts come on a single fret and include the intake splitter plates with perforated boundary air holes, ejection seat harnesses, and a few other detail parts.  Still, if that’s not your game, alternate decals are provided for the cockpit details.

The kit comes with two sets of Sprues J, I, and Weapon_1 which provide an overwhelming set of munitions, but for the MiG-25PU, you’ll be using…none of them. This version of the jet did not carry weapons, so you get a “bonus” Soviet/Russian weapons set. I think the only stores that apply here is the distinctive centerline drop tank.

The decals seem very well printed from a technical point of view, and the markings options are all quite good and diverse.  However, I cannot take my eyes off of the Ukrainian option.

Weaknesses:  Since this kit is based mostly on Kitty Hawk’s 2013 Foxbat tooling, its shortcomings carry over here, too.  A standard refrain by some, it can be argued that the kit is somewhat overengineered where what could be simple single piece molded parts are broken up into many parts, such as with the speed brake assembly or the separate outboard wing tips.  This kit can also present a number of rather tricky fits during assembly.  For example, take your time with the intakes and forward and rear fuselage fits especially with the conflicts between some mounting tabs.  These are rather well-known “fit gremlins” in this kit – so test fit!  It might represent a little more work and time, but these are not project-ending challenges.

Also, the kit instructions show the intake ramps closing off the intakes as in a MiG-29 or Su-27.  This feature is fictitious, as the MiG-25 had no such FOD doors and it also lacked alternative intake doors.  Of course, when you fix this error, another problem manifests:  there is no intake trunking and you can see all the way inside the model.  The “EW pods” on the wingtips are misidentified.  They are actually mass balancers.  I also lament that fact that unlike their MiG-25RB/RBT kit, there are no resin exhausts included in this issue of the kit.  Those were real highlights of their previous Foxbat, and really went far in terms of detail way beyond the injection molded exhaust parts.

There’s a moderate lack of color call-outs for various parts and subassemblies, and the cockpit should be the distinctive blue-green/turquoise used by the MiG OKB and the ejection seat frame is black.  The closest match for the colors of the various dielectric panels and the wheel hubs is FS 34227.  Also note that the markings guide at the center of the instruction booklet are interleaved with one another.  Only the centerfold illustration shows the complete markings guide for that one aircraft.  To get a full look at the colors and markings for the option you build, you’ll have to take out the staples holding the instruction booklet together.

Kitty Hawk’s third issue of their 1:48 MiG-25 family is perhaps the most interesting of all:  the two seat MiG-25PU trainer. The addition of really nicely made cast resin and photoetched metal parts are some really nice added features here.  The kit is shadowed by some fit issues that are well known, but so are the solutions.  With some work and careful effort, this kit can serve as the basis for a very nice replica of the Foxbat-C.

Sincere thanks to Glen Coleman and Kitty Hawk Models for the review sample.  You can find out more about them and future releases at www.kittyhawkmodel.com