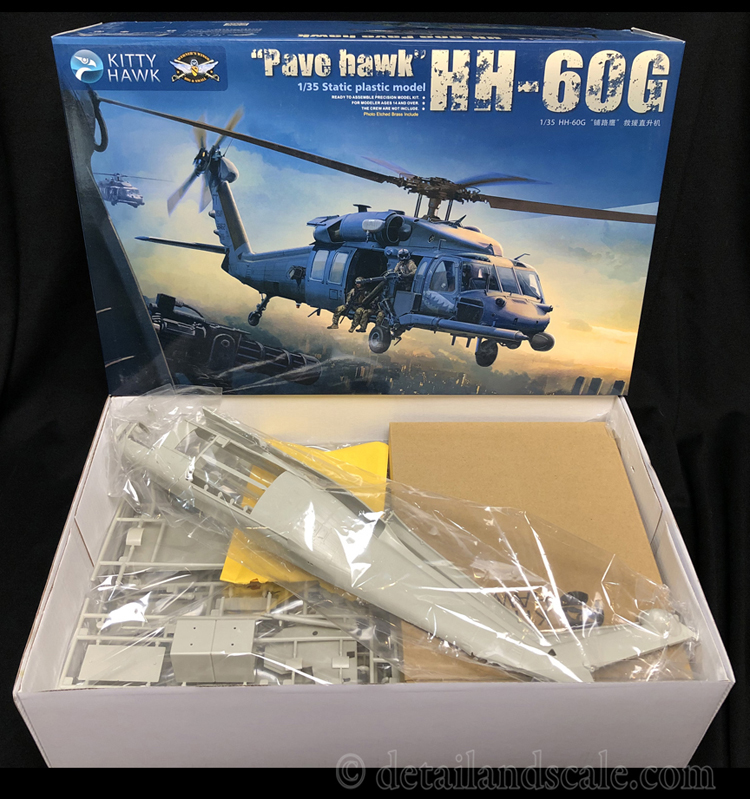 The Combat Search and Rescue (CSAR) mission represents one of the most important and dangerous missions in wartime: the recovery of personnel from behind enemy lines.  To these ends, the U. S. Air Force developed the rather remarkable HH-60G Pave Hawk helicopter for special operations that span CSAR, civil search and rescue, medivac, disaster response, NASA spaceflight support, and other special mission responsibilities.  Kitty Hawk released their 1:35 scale HH-60G in late 2019, and here, we are pleased to share our review of this kit.

The roots of the HH-60G go back to 1981 when the U. S. Air Force chose the UH-60A Black Hawk to replace the venerable HH-3E Jolly Green Giant.  These UH-60As, called Credible Hawks, were upgraded with an air refueling probe and additional fuel tanks in the cabin, and door guns were upgraded to .50 caliber machine guns.  By 1990, the UH-60A Credible Hawk was replaced by the HH-60G Pave Hawk.  While based on the earlier UH-60A, Pave Hawks had completely new communications and navigation suites that includes an integrated inertial navigation/global positioning and Doppler navigation systems, satellite communications, secure voice communications, HAVE QUICK radios, and sophisticated datalink communication systems.  They were also equipped with autopilot, night vision goggle lighting, and a FLIR system for nighttime low-level operations.  Some Pave Hawks have color weather radar and an engine/rotor blade anti-ice system conferring an all-weather capability.  They also carried over the retractable in-flight refueling probe to extend its range, 7.62 mm miniguns or .50-caliber machine guns on the doors, and an 8,000 lb.-capacity cargo hook.  Often operating in hot LZs, Pave Hawks were also equipped with a formidable self-defense capability involving sophisticated radar warning receivers, infrared jammers, and a flare and chaff countermeasure dispenser system.  The MH-60G was the U. S. Army’s version of the HH-60G.

Pave Hawks first saw action in Operation DESERT STORM and provided CSAR support for coalition forces throughout the conflict, as well as inserting and recovering SEALs in various locations.  The USAF Special Operations Command started off with MH-60Gs, but later in 1991, they were re-designated as HH-60Gs.  Pave Hawks have been called into action, again and again, from Operations ALLIED FORCE to ENDURING FREEDOM, IRAQI FREEDOM, ODDESSEY DAWN, and INHERENT RESOLVE.  Other notable activities include their roles in diverse humanitarian relief activities such as the 2005 Pacific tsunami to rescue operations in the aftermath of Hurricane Katrina.  The HH-60G has been showing its age, and since 2012, efforts have been underway to develop its replacement.  In 2019, the HH-60W first flew, and it represents the future of the Pave Hawk lineage in the special operations role in the decades to come.

Strengths:  It seems that Kitty Hawk continues to progressively improve elements of their kit design, and this HH-60G kit really appears to shine.  First up, the kit interior is outstanding and rich in detail.  In the past, I’ve critiqued Kitty Hawk for “soft” instrument panel or side console details, but here, such parts bristle with sharp relief, and detail painters will be very happy.  The flight deck and cabin are replete with other great features, such as detailed seats and seat frames (for both pilot and passenger seats), great stick, rudder pedal, and collective details, very nicely made photoetched restraints and belts (down the stitching details), the optional rear cabin Robertson extended range fuel tank, and two very nicely made pilot figures wearing the appropriate USAF-style gear.  The casting and detail looks really good on the figures, but while the instructions show them coming with optional helmet-mounted NVGs, the goggle parts do not appear to have been included.

Door gunner positions can also be fitted with optional .50 caliber machine guns (but see below).  Ammo belts are very well represented by some excellent photoetched parts.  Flight deck and main cabin doors are separate parts that can be positioned open or closed.  With all that detail, opened doors are an obvious choice.  Show off what’s inside.  As usual, Kitty Hawk does amazing clear parts, and the optical quality is sterling.

The kit comes with a really well detailed set of T-700 engines.  One can certainly add some of the finer plumbing that’s absent, but the larger pipes and lines are included as separate parts.  Engine access doors are also positionable.  The rotor head and swash plate also look very complete, and the engine exhausts feature very nice exhaust shrouds.  I like the way that the entire engine assembly drops down onto the top of the airframe.  It’s a smart way to produce this assembly.

Other nice features include an optional extended or retracted refueling probe, an open or closed nose avionics bay, great chaff, flare, and IR countermeasures gear, various antennas, hand-holds, FLIR turret, radome, windshield wipers, cable cutters, the hoist system, and plenty more.  The landing gear are excellent, and the tires even feature the manufacturer’s imprimatur.  Nice!  Photoetched details also provide a number or exterior airframe details, such as grills, vents, and trailing edge static wicks.  In 1:35 scale, you have to be very detailed, and this kit appears to nail it.

The kit also comes with additional external stores:  30mm chain guns, seven and 19-shot rocket pods, and four AGM-114 Hellfire missiles.  Their assembly and placement is not described in the instructions, and I am pretty sure these are not to be used on these Air Force Pave Hawks.

The decal sheet covers two HH-60Gs, one in a Euro One-style camouflage scheme and the other in the modern overall low-vis gray scheme (but sporting a full-on shark mouth).  The decals look very good and well-printed, especially the instrument panel and console details.
While the test fits between the left and right fuselage halves revealed no issues, there’s a lot of interior, but this is an “in-the-box” review that does not get into assembly.  My unscientific poll of a few folks who have built this kit report that this kit indeed fits very well.  In the past, various Kitty Hawk kits have been plagued by fit glitches here and there, so this news is nice to hear.  This kit has a lot of potential and it sounds like fit issues do not limit that potential.

Weaknesses:  While I am a fan of the HH-60G and that it is one of my favorite rotary wing photographic subjects, I am far from a Pave Hawk subject matter expert.  That said, I see no glaring or obvious accuracy issues.  However, a few points in the instructions raised an eyebrow.  It has also been reported that some part numbers in the instructions are miss-numbered, and while that might slow you down for a moment, they are easy to figure out.  There seem to be no instructions involving how to position the separate engine access doors in the open position.

While there is an optional fit for window-mounted miniguns and floor-mounted GAU-21s depicted in the very last set of instructions (which also seems a bit out of sequence), the minigun assembly seems not be depicted anywhere in the instructions.  I am also not sure that that door gun configuration is appropriate for USAF Pave Hawks.  The instrument panel dial faces have no raised detail, and while they are provided as part of a single decal sheet, separate dial faces would accommodate the detail painter.  I’ll likely use a punch and die set to render them separate from the decal sheet.  Also note that with the way the painting and markings guide is printed, one will have to undo the staples in the instructions and remove the centerfold markings guide to get a complete look at 92-6465.

Kitty Hawk’s 1:35 scale HH-60G Pave Hawk kit is a fairly complex and expensive kit, and it is quite impressive.  As someone who enjoys working in larger scales, I find this kit to be very inviting, and the subject matter is really interesting.  Furthermore, we recommend aftermarket decals by Werner’s Wings if you’re looking for markings other than those in the kit, and Live Resin does some excellent pilot and door gunner figures wearing the HGU-56/P helmets, the PSGC Air Warrior System gear, and those fearsome-looking “Predator” style facemasks.  It’s hard to pass those up!

Sincere thanks to Glen Coleman and Kitty Hawk Models for the review sample.  You can find out more about them and future releases at www.kittyhawkmodel.com and on Facebook at https://www.facebook.com/Kitty-hawk-736521713066784/.