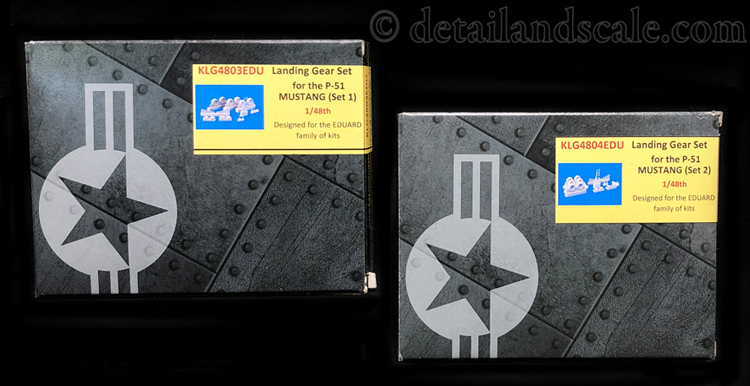 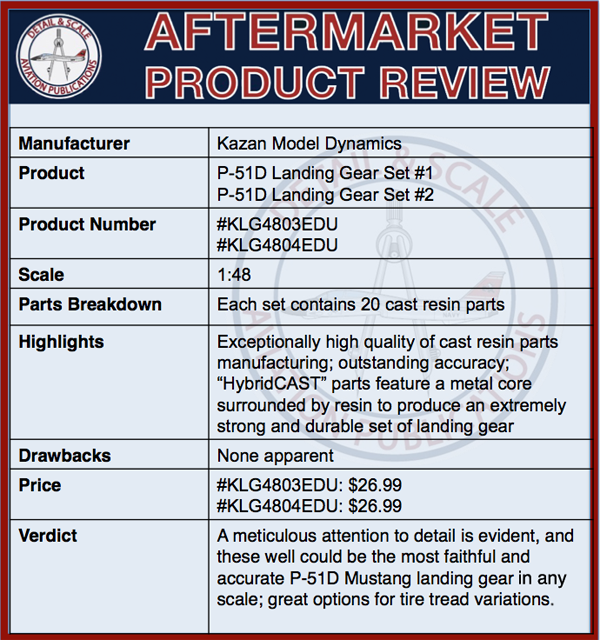 The landing gear of a model aircraft is often treated as less of a “focal point” for both builders and viewers, but when they are done well, landing gear can draw a lot of attention.  Eduard’s 1:48 scale P-51D Mustang has gear that can be rated as “okay” in terms of detail.  Further, the kit gear has been consistently described as somewhat mechanically weak by those who have built it (I’ve got the kit on my bench right now, and I tend to concur with that assessment).

Fortunately, Kazan Model Dynamics released two sets of 1:48 scale P-51D Mustang landing gear that are not just stronger but feature far superior detail than what the kit offers.  Kazan Model Dynamics has been releasing a number or exceptional aftermarket detail sets over the last year or so (you can find these reviews HERE).   Not only is their work exquisitely designed, but the casting and detail is exceptional in quality and accuracy.

First up: #KLG4803EDU P-51D Landing Gear Set #1.  It contains 20 cast resin parts.  These are complete replacement parts for the Eduard kit’s main gear and they are designed to be drop-in replacements.  This set reproduces the Mustang’s gear to the point that these are the most exquisitely detailed and accurate P-51D gear that I’ve seen in any scale.

Everything is there, from the brake lines to the landing gear door attachment braces, gear door actuators, separate inner and outer wheel hubs, and a new set of main gear well doors.  Three styles of tires are featured in Set 1: Brick Tread pattern, Oval Tread pattern, and Diamond Tread pattern.  All of these parts are by far superior to the kit parts, especially the tires. The detail and fidelity of casting is stunning.  Furthermore, Eduard’s P-51 tires are underwhelming (that’s mostly on purpose, as they try to direct most scale modelers to aftermarket parts for the wheels).  These are a very welcomed replacement.

The gear bodies and gear door actuators are cast around a solid metal core – hence the “HybridCAST” label.  These parts will more than sufficiently tolerate the weight of the model.  Unlike a solid resin casting, these physically cannot (and will not) bend or distort over time.  It’s impressive.  Another nice feature (and rather ingenious when it comes to the molding and production process) is that the silver struts on the door actuators (the metal cores themselves) are left exposed and do not require any painting.

The second set, KLG4804EDU P-51D Landing Gear Set #2, is essentially the same as Set #1.  However, it contains a different combination and range of tire treads for the P-51D:  the Rounded Diamond Tread pattern, the Connected Square Tread pattern, and the “+” Tread pattern.

Overall, these landing gear sets are outstanding.  The meticulous attention to detail is evident for all to see, and these are the most faithful and accurate P-51D Mustang landing gear that I’ve seen in any scale.  Detail-oriented builders will love it and Mustang specialists will geek out with this set.  Keep the great work coming, Kazan Model Dynamics!

Sincere thanks are owed to John Bubak at Kazan Model Dynamics for the review sample.  You visit them on the web at https://www.kazanmodeldynamics.com where you order this set directly (and any of their other items), follow their blog, and read their build articles.