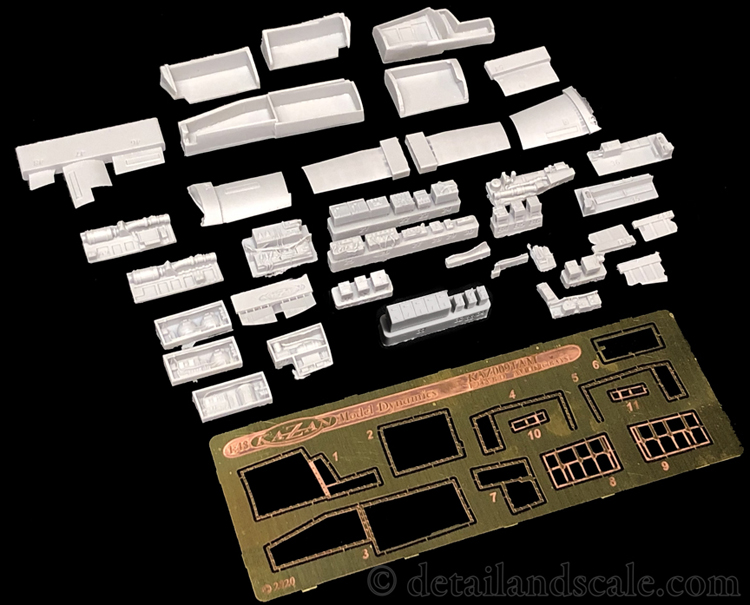 The F-14 Tomcat is always a popular subject for scale modelers.  The 1:48 scale Tamiya Tomcat kits rank exceptionally high on the personal opinion polls of just about every scale modeler who have built them (and here, you can read see our reviews of the 1:48 scale F-14A and F-14D).  However, if you wish to really explore territory in which to super-detail your Tamiya Tomcat, Kazan Model Dynamics has been releasing a number of F-14 detail sets (which you can read our reviews of HERE).  Kazan Model Dynamics recently released another 1:48 scale detail set for the Tamiya Tomcats, and this one features the F-14A/B/D avionics bays.

Kazan Model Dynamics # KAZ48009TAM F-14A/B/D Avionics Bays (MSRP:$49.99) is a very extensive set that contains 54 cast resin parts and 11 photoetched metal parts on one fret.  It features:  (1) the forward left and right avionics bays just behind the radome which house the boxes for the radar’s processor computer, fire control computer, radar transmitter, and ILS receiver system; (2) the two left and right avionics bays in the upper aft forward fuselage (the “gull panel” bays) that contained the air inlet ramp control system computers, mission computers, radios, and other gear; (3) the liquid oxygen breathing supply or OBOGS unit (see below), the emergency reserve oxygen breathing supply, and; (4) the environmental control system (ECS) bay on the lower right forward fuselage.  As with all Kazan sets, these parts were designed first in a digital environment, followed by the 3-D printing of masters, and then refined for ideal fit and resin casting.  The instructions are very well written, typically thorough, and very clearly rendered.

I remember well my first attempt to superdetail an F-14 using the classic Verlinden set for the Hasegawa F-14A.  In comparing that to this Kazan set, I think about how far this hobby has come.  Kazan’s F-14 detail set here is also a lot more comprehensive.  This set captures some really cool features of the F-14’s inner workings for those scale modelers who aim to open up their jet.  This is also the first set of its kind designed for the Tamiya F-14s.  Just as a point of comparison, the detail, accuracy, and fidelity casting is somewhat superior to the Black Dog detail set for the AMK F-14D kit, and which covers only some of the same open bays.  Here, I am very impressed by the scope of Kazan’s detail, from the surface features of the avionics boxes the wiring bundles to the inclusions of the gull wing bays – which I do not think any aftermarket detail manufacturer has ever produced.

The approach to parts breakdown is very well thought-out. The left and right forward avionics bays and the gull panel bays are provided as empty bays which the scale modeler then populates with boxes and other gear added as separate parts (just like the real thing).  This approach allows for maximum detail in casting and ease of painting.  Three optional sets of breathing oxygen gear are provided.  In very early F-14As, two bright green-painted LOX bottles were fitted, but one bottle became standard in production F-14As and F-14Bs.  In the F-14D, the “legacy LOX” system was completely replaced by an OBOGS (Onboard Oxygen Generating System) unit fitted to the same location.  This set has all three options very nicely represented as alternate parts.  Other alternate details include differences in the boxes in the lower ECS bay that have some minor version and time period-specific variations in layout.

All the bay doors are included as cast resin items and feature excellent detail inside and out, including wiring and even the extended panel fasteners.  The majority of the photoetched metal parts cover the open panel frame surfaces and look quite good, right down to the number of fastener holes on the frame themselves.  The gull bay doors get some photoetched details, too, and it produces a very accurate appearance of the complex inner surface structures of these doors.

A few notes that represent really fine-grained Tomcat minutia:  the boxes in the forward and gull avionics bays differed ever so slightly in small details between the hardware for the F-14A/B and F-14D.  The instructions note this, and those details range from rather minor to nearly unnoticeable in 1:48 scale.  Check your references for the F-14D as well, as the box configurations in the ECS bay (Parts A9/B10; discussed above) in the F-14D was a little different with its JTIDS processor, ASPJ system, and a mission computer fitted below the big pipework in there.  Also note that the instructions call for Part 38 (the OBOGS system) for its use in “F-14A, some Bs and likely all Ds.”  All F-14Ds rolled off the production line with OBOGS, and they were never retrofitted to the F-14A or F-14B.  Therefore, use Part 38 only if you are building an F-14D.

Also, a tip to the builder: while these panels were hinged, each one stayed propped up and open via the use of single brace.  These are not included here, but any scale modeler will be able to make their own out of styrene or brass rod.  This is not a critique of Kazan’s set, but a response to a few completed builds that I’ve seen over the years that had their F-14’s bays opened up, with panels swung high, yet unbraced.  It is a good detail point to keep in mind.

This set is not for beginners, and a little experience working with cast resin and PE are needed to get the most out of it.  Pay careful attention to the construction notes and advice in the instructions.  Note that shortening the forward nose gear well by about 3mm is be necessary to squeeze in the forward avionics bays.  I would also invest in a very good (both sharp and fine) razor saw to cut out all these panels from the kit.

Overall, this set is really outstanding.  It holds a great deal of potential to superdetail the 1:48 Tamiya Tomcats in ways that have been previously unattainable.  Personally, your reviewer is quite excited about it and is planning a new project thanks to this set!  Many thanks are owed to John Bubak of Kazan Model Dynamics for the review sample.  You can find out more, follow their blog, and order this set and more from Kazan’s website at an https://www.kazanmodeldynamics.com.

I thank Nick Kessel for his contributions to this review in the form of several very interesting conversations involving his deep, maintenance instructor-level knowledge of Tomcat avionics.