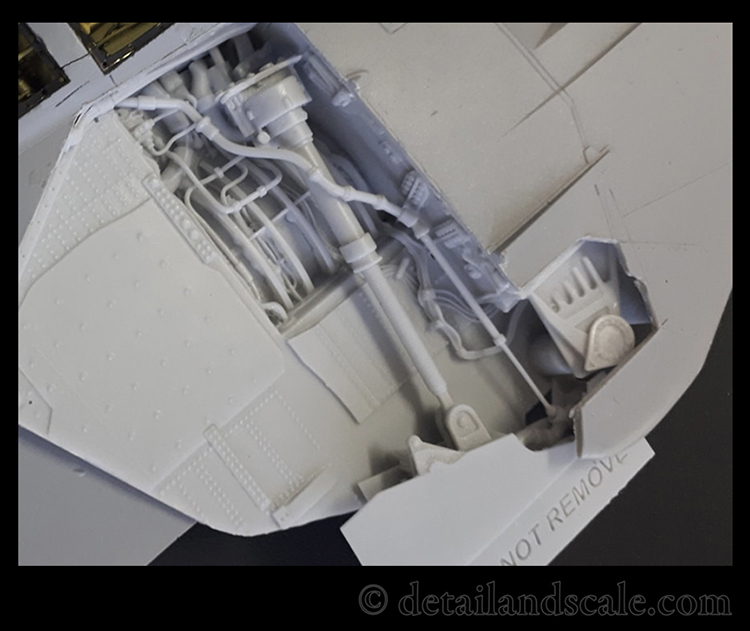 In the 1960s, aircraft engineers saw the variable sweep wing as the solution to achieving maximum aerodynamic efficiency at low and high airspeeds – where an aircraft would literally change its shape in flight to achieve optimal lift and drag coefficients.  Such technology was used in aircraft such as the XF10F,  F-111, MiG-23/27, and B-1 bomber, but variable geometry wings are probably most famously associated with the Grumman F-14 Tomcat.

Kazan Model Dynamics recently made some waves with their release of a 1:48 scale aftermarket resin and photoetched metal detail set for the interior of the F-14’s spine, from just to the rear of the aft canopy edge all the way down into the boat tail (see our review HERE).  Their second release is the F-14 wing box set that allows builders to open up this portion of the Tomcat.  This set is designed for use in the 1:48 scale Hasegawa F-14, since it was under development before the Tamiya Tomcat was released in the late summer of 2016.

This set (Kazan Model Dynamics # KAZ006HAS F-14A/B/D Wing Box Set, MSRP: $45.99) contains 42 cast resin parts and eight photoetched metal parts on a single fret that provide the parts to depict the F-14’s wing sweep mechanism on both sides of the jet.  The set includes the entire left and right sides of the top of the wing sweep mechanism compartment, sidewalls, servos, servo arms, jackscrews, individual pipes, prominent cable bundles, the inboard surfaces of each wing, and other various hardware – all of which are provided as cast resin details.  While the set is called the “Wing Box,” I’d split hairs just a bit and say that technically speaking, the F-14 wing box was a discrete structure mostly forward of where this set covers, but the wing pivot mechanism exposed here indeed does catch the outboard part of the box, strictly speaking, of course.

I’ve worked with aftermarket superdetail parts for almost 30 years.  As with Kazan Model Dynamics F-14 Spine Set, this has got to be again one of the most exciting and best produced sets I’ve seen in a long time.  Kazan’s research, design work, and casting is quickly earning a very strong reputation.  Further, this set provides an awesome opportunity to open up your Hasegawa F-14.  You’ll be able to show off like never before some really distinctive and impressive details and highlight some of the complex mechanics at the heart of the venerable Tomcat.  It’s unique.  No one has ever done something like this before, and that adds even more appeal – it’s not just another aftermarket cockpit.  It will make your build that more notable.

There are many highlights to this set.  First, the quality of the parts design, resin casting, and PE metal parts are equally excellent.  It’s up there with Eduard.  Kazan might be a new manufacturer, but their standards are as high as their execution.  These parts are all flawless and richly detailed.  There are ribs, bulkheads, wires, raised rivets, clamps on pipes, clips on wire bundles, and so forth.  This all demonstrates an outstanding attention to detail.

Moreover, I’ve gone through my F-14 references and photos and I am deeply impressed with this set.  I really cannot identify a single inaccuracy or oversight.  Depending on how you want to build your Tomcat, these parts (unmodified) will give you a full-forward wing sweep at 28°.  For a swept wing, you just have to reposition the wing sweep jackscrew housing and shorten the jackscrew itself.

This detail set isn’t for novices.  It is complex and requires a good deal of surgery to the base kit. The parts prep will take some time.  Still, it is designed with a minimum of parts and the parts breakdown is straightforward so as to be inviting to scale modelers of an intermediate skills level.  For me, I think the most challenging item here is freeing some of the cast resin pipes from their casting blocks.  Finesse and slow deliberateness with a brand-new No. 11 blade will be involved in my approach.

The instructions are excellent – very well detailed, clearly written, and illustrated in color.  Also, Kazan Model Dynamics has an outstanding tutorial and guide to the assembly of the wing box set at their website:  https://www.kazanmodeldynamics.com/wing_glove_article.html

Also, if used in conjunction with Kazan’s F-14 spine set, it is stated in the instructions to incorporate either one firstinto the model, and then the other.  Otherwise, the top of the fuselage will be very physically weak owing to all the removed plastic.

As noted, the Kazan wing box set is designed to fit the 1:48 scale Hasegawa Tomcat of which there are many diverse releases since the late 1980s.  Of course, the Tamiya kit has transcended the Hasegawa F-14 in a lot of ways including avoiding the many tricky and awkward fits of the Hasegawa kit.  Yet, the Hasegawa kit is still good and overall quite accurate.  I unreservedly recommend Dave Aungst’s series of articles over at HyperScale to help transcend the quirks and issues of the kit:  http://www.hyperscale.com/features/2001/f14constructiondwa_3.htm.

As the wing sweep hardware was unchanged across all F-14 variants, this set is good for any F-14A, B, or D.  Some of us will be tempted to see if this set could also work in the Tamiya F-14.  I say experiment at your own risk.  Still, this set could work on the Tamiya F-14 with little modification.  These parts seem to align quite closely indeed with the panel lines of the Tamiya upper fuselage…

Sincere thanks are owed to John Bubak at Kazan Model Dynamics for the review sample.  You visit them on the web at https://www.kazanmodeldynamics.com where you order this set directly (or bundled with the spine parts in their F-14A/B/D Upper Fuselage Access Set), follow their blog, and read the aforementioned article on building the wing box set.  Tomcats forever, baby!