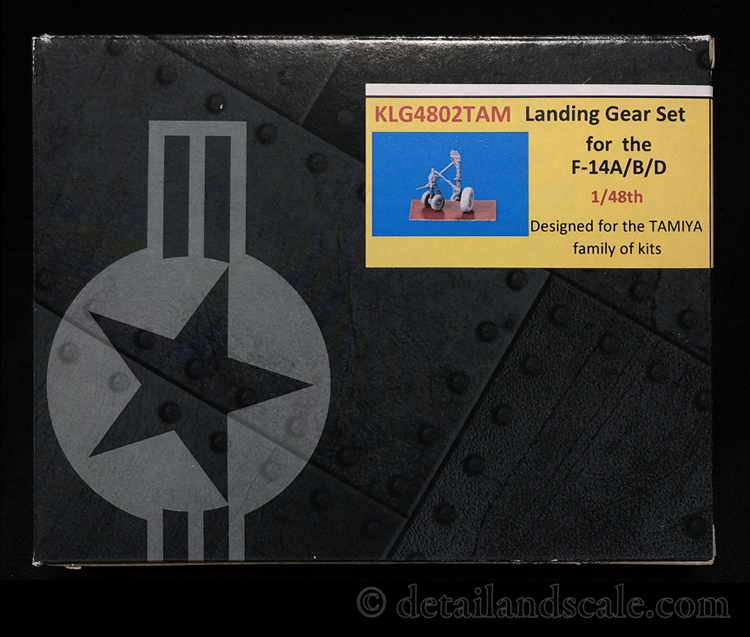 Kazan Model Dynamics has been releasing a number or exceptional aftermarket detail sets for the Hasegawa 1:48 scale F-14 Tomcat (you can find our reviews of these sets HERE). Not only is their work exquisitely designed, but the casting and detail is exceptional in quality and accuracy.  In this new set, Kazan Model Dynamics offers a new set: F-14A/B/D Landing Gear for the Tamiya kits.

This set (Kazan Model Dynamics # KLG4802TAM HybridCAST Landing Gear Set for the F-14A/B/D; MSRP = $34.99) contains 42 cast resin parts. These are complete replacement parts for the Tamiya F-14’s nose gear and main gear and they are designed to be drop-in replacements, designed and cast with such precision that various parts can be assembled with a “friction fit” (but of course, I always recommend CA glue!).  The Tomcat’s landing gear are rather complex engineering affairs, and this set reproduces them to the point that these are the most exquisitely detailed and accurate F-14 gear that I’ve seen in any scale.

Starting with the gear bodies themselves, both nose and main gear are cast around a solid metal core – hence the “HybridCAST” label. These parts will more than sufficiently tolerate the weight of the model. Unlike a solid resin casting, these physically cannot and will not bend or distort over time. It’s impressive!  Another nice feature (and rather ingenious when it comes to the molding and production process) is that the silver oleos (the metal cores themselves) are left exposed and do not require any painting.

The nose gear is all there, from the catapult bar to the approach indicator, the nosewheel hydraulic steering cylinder, oleo scissors, holdback attachment point, and the retraction drag brace. The nosewheel tires capture the tire tread perfectly, and the “Michelin Air” imprimatur is perfectly reproduced on the outboard tire sidewalls. All that you can add are the electrical lines to the landing light and small hydraulic lines to the nosewheel steering cylinder.

The left and right main gear are similarly accurate and detailed. The main mount, the big side brace, the brace actuator, scissors, and even the hydraulic lines mounted on the scissors are included here. The surface detail especially on the main gear is amazing, and it captures in very fine detail hydraulic lines, braces, and tie-down rings just perfectly. The circumferential tire tread, disk brake assembly, and “Goodyear Aircraft Rib” imprimatur on the outboard main gear tire sidewalls all look great.  This is light years beyond the kit parts.

A nice touch here: there are three styles of main gear wheel hubs provided in this set. For those outside of the F-14 community you might be surprised that there were different styles of wheel hubs on the Tomcat, differing between with early production jets featuring an initial style into the early 1980s.  This was followed by second style that persisted into the mid-1990s and was replaced by a final hub design fitted until Tomcat retirement 2006. Contrary to some sources out there, these styles were not variant-specific, but time period-specific. These different hub shapes and details, each intricately and subtly different in their own ways, are accurately represented here.

Overall, this landing gear set is awesome. It gets a solid “brazo-zulu” rating from me.  The meticulous attention to detail is evident for all to see, and these are the most faithful and accurate F-14 landing gear that I’ve seen in any scale. Detail-oriented builders will love it, and Tomcat specialists will geek out with this set. I surely did!