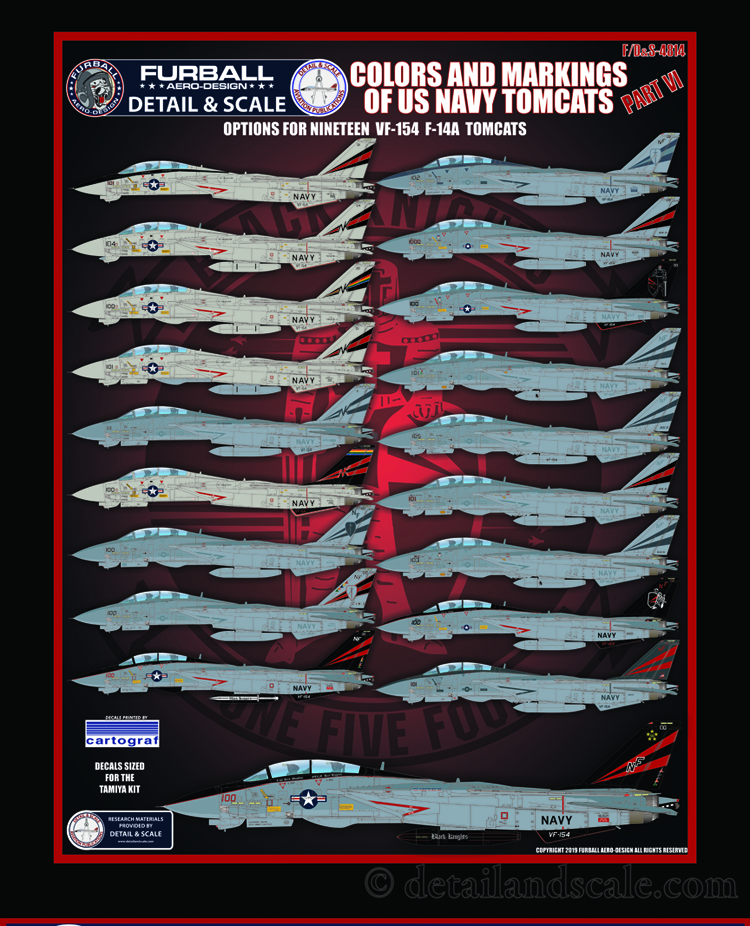 The Grumman F-14 Tomcat carried some of the most interesting, eye-catching, and unforgettable paint schemes over its service lifetime – even into the “drab days” of the low-visibility TPS (Tactical Paint Scheme).  Furball Aero-Design continues on with their Colors and Markings of the U.S. Navy Tomcat series with Part VI. This set is dedicated to a selection of F-14A from VF-154 Black Knights as they appeared between 1984 and 2003.

This decal sheet was made possible with research materials provided by Detail & Scale.  It is designed to complement Detail & Scale’s digital reference books, Colors and Markings of U.S. Navy F-14 Tomcats, Part 1: Atlantic Fleet Squadrons, and Part 2: Pacific Fleet Squadrons.  Both eBooks were written by Bert Kinzey with art by Rock Roszak.  In the interest of transparency and impartiality, I wish to disclose that your reviewer had nothing to do with the development of this sheet.  Further, I’m a hardcore Tomcat guy since I was a kid growing up next to Grumman – so if I see any errors, you’re going to hear about it.

In this set, there are decals for 19 different F-14A marking options, the only model Tomcat that the Black Knights flew. Also included are also stencil and data decals provided to for two complete jets. The Tomcats covered here are:

As is expected, these decals are typical Furball – straight-up awesome. The quality of both decal design by Furball and printing by Cartograf is superlative.  Black Knights jets have never been treated so well in 1:48 scale.  You get every CAG jet scheme I know about as well as a few CO and line jets from the mid-1980s onward. They cover the overall Gull Gray scheme to the many variations on the TPS theme until the squadron disestablished after their first cruise at the beginning of Operation IRAQI FREEDOM. The sheet very satisfyingly captures the historical evolution of the Black Knights and these include some of the best looking and most distinctive CAG tails in F-14 history.

There’s a lot of subtle, unique, and quite individualized touches to the different Black Knight schemes and this set really does a great job representing them all. The last set of markings represents the CO’s jet at the close of their now famous secret detachment during the opening of Operation IRAQI FREEDOM in 2003. At the request of CENTCOM, VF-154 sent four Tomcats ashore to Al Udeid Air Base to support Special Forces, especially in northern Iraq. The Black Knights F-14s had the range, loiter time, LANTIRN pods, and weapons loads to serve as FAC-As. They designated targets for other assets while strafing lots hostile targets and dropping some 50,000 pounds of precision guided munitions. In doing so, the jets and their crews received high praise from the special operators on the ground. The slew of bomb silhouettes on the decal sheet belongs to this airplane. It was a unique chapter in the Tomcat story.

One of my favorite options among the markings options on this sheet is the humorous and satirical “Oop, Ack Baby!” badge worn by NK 104 on the inside of the vertical stabilizers in 1987 (a few jets from VF-21 Freelancers, the Black Knight’s sister squadron, also wore this marking for a time).  It was a combination of Grumman’s classic Tomcat, the “Anytime, Baby!” logo and the Bloom County comic strip character “Bill the Cat,” who was an exasperated, mangy, mind-blown, and hairball-hacking feline. There are a few stories out there as to the design’s satirical origins possibly as early as 1985.

As noted, the printing (including the incredibly restrained and thin carrier film) by Cartograf is impeccable. The set also includes Furball’s F-14 stencil set (#48-059) on a second, smaller sheet. It covers both Gull Gray and TPS marked aircraft. Beyond the awesome printing, it’s the attention to little details that impresses just as much, including the fidelity of the airframe stencils which include markings for the GRU-7A ejection seats, helmet decals for the pilot and RIO, the various and correct styles of “No Step” and “No Step/Lift” stencils, and other airframe markings.

These decals are sized for the Tamiya 1:48 scale Tomcat, and the angle and size of the trailing edge of the tail (which matters in a lot of VF-154 schemes) is, in fact, a bit different than the Hasegawa kit. Other schemes on this sheet decals are “generic” enough in their sizing so as to fit on any 1:48 scale F-14.

I can offer no substantive critiques of this decal set.  Bottom line: it’s gorgeous, baby!

Again, Furball Aero-Design does another great job with this offering and it will allow scale modelers to model Black Knights Tomcats from their early days to the end of the squadron’s service.  The high standard of research also shines through on the accuracy of these decals.