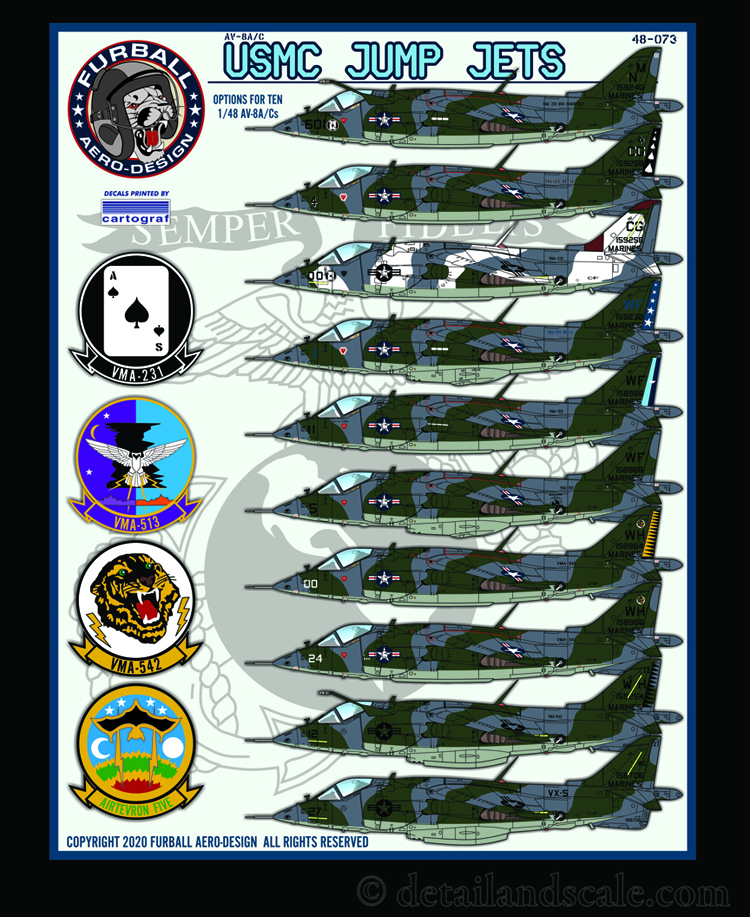 Few aircraft are as distinctive and iconic as the Harrier.  With World War III looming on the horizon in the 1950s, the specter of atomic devastation would have involved the annihilation of NATO airfields in Europe.  There was a need to develop aircraft that could operate from forest clearings or other decentralized or impromptu settings.  A combat aircraft with VSTOL (Vertical/Short Take-off and Landing) capability was explored as a solution to this problem.  The British manufacturer Hawker Siddeley first conceived the Harrier in in the 1960s, and many variants of the Harrier served the RAF and Royal Navy into 2010.  The other major operator of the Harrier has been the U. S. Marine Corps, who still fly an advanced version of the AV-8B, long capitalizing on the jump-jet’s versatile and lethal capabilities for the Marine Corps mission.  The first generation of USMC Harriers were the AV-8A and AV-8C.  The Marines acquired 102 AV-8As for ground attack, close air support, and reconnaissance roles.  They were powered by a Pegasus 11 engine and had a simplified nav/attack system compared to its British contemporaries.  The AV-8C was an upgraded AV-8A and featured installation of new ECM gear, a new inertial navigation system, and upgraded VTOL performance.

There have been a few 1:48 scale kits of the AV-8A over the decades, such as Tamiya kit in 1979 and a few issues of Monogram’s molds beginning in 1981.  In 2020, Kinetic released the first new tool 1:48 scale AV-8A in nearly 40 years.  In early 2021, Furball Aero-Design released a decal sheet, USMC Jump Jets (# 48-073; MSRP: $19.99) to provide a much wider range and higher quality of markings options for the new Kinetic kit.  This set features ten different schemes covering first-generation USMC Harriers:

Furball has a long-established reputation for producing excellent decal sheets, and this set does not disappoint.  The quality of both the decal design and artwork by Furball, paired with the printing by Cartograf, produces a superlative result.  Decals simply do not get any better than this.  The markings are highly accurate in all respects, all the colors are spot-on (including the correctly muted yellows for the low-voltage formation lights), printing is razor-sharp, and carrier film is thin and very restrained.  The high standard of research also shines through on the accuracy of these decals.  These markings are sized and optimized for the Kinetic kit, which has received a lot of accolades.  However, if you have the earlier 1:48 scale Tamiya or Monogram AV-8A kit, just about all of these markings can be adapted to those kits without any trouble.

The sheet includes a very detailed set of complete airframe stencils for two aircraft.  The choices in schemes are all visually interesting and unique.  Many of the AV-8As and AV-8Cs did not deviate from their overall green and gray camouflage paint scheme, but individual squadrons put a variety of color on their jets, and here, I am really drawn to the Harrier markings options from VMA-513 and VMA-532.  Of course, the most unusual scheme here is VMA-231’s temporary winter camouflage, where the most of the dark green – but not all – of the camouflage scheme was overpainted (likely brush painted) with white.  It is unique!

It’s great to see this set from Furball Aero-Design, and the Kinetic AV-8A gets the deluxe treatment here.  It will allow scale modelers to represent a range of first generation USMC Harriers.