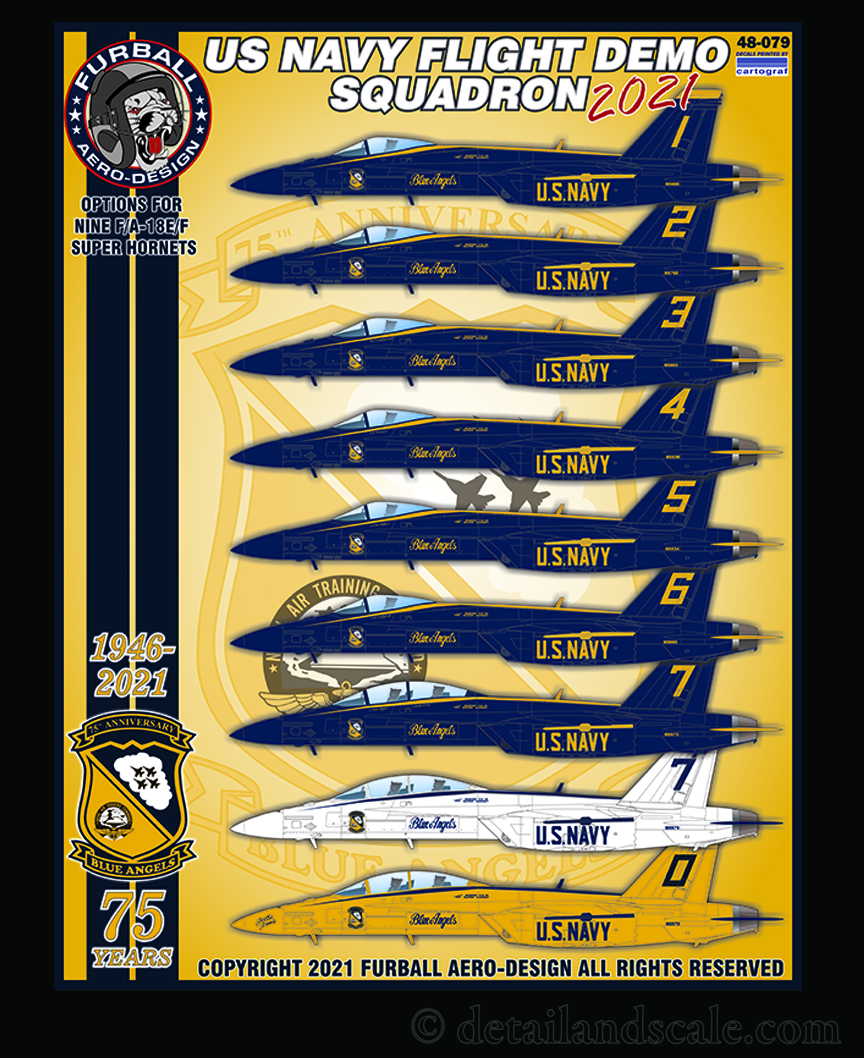 The Blue Angels are known around the world as the U. S. Navy’s Flight Demonstration Squadron.  Since their inception in 1946, they have performed for an estimated tens of millions of people in their mission to showcase the teamwork and professionalism of the United States Navy and Marine Corps through flight demonstrations and community outreach.  More broadly, they seek to inspire a culture of excellence and service to country.  In 2020, the U. S. Navy’s famous Blue Angels traded in their aged Legacy Hornets for F/A-18E and -F Super Hornets (and you can find out more about Detail & Scale’s book on the Super Hornet, including how to order your copy HERE).  The conversion to the Super Hornet was a change long in the works, especially as the Navy had retired the last Legacy Hornets in 2019 and that the Blues operated the very oldest F/A-18Cs and -Ds.  The exceptional dedication of their sailors and maintenance officers kept their jets aloft, even though sometimes they would be down a jet or would have to endure a mid-demo abort.  A lot of excitement and fanfare surrounded their transition to the Super Hornet in 2020.  The debut of the new aircraft during the 2021 airshow season also coincided with the 75th anniversary of the Navy’s flight demo team.

This decal set is the first to provide the markings (in any scale) for the new F/A-18E/Fs flown by the Blues in 2021.  It provides makings for nine aircraft:

These decals are characteristic Furball – they are of the highest quality decals available on the market today.  They can fit the Hasegawa, Meng, Revell, or Italieri kits with equal precision.  The outstanding quality of both the decal design and artwork by Furball is matched only by the printing by Cartograf.  They are both superlative.  The yellows on this sheet are printed very thick and are very solid.  Transparency of a yellow decal upon a dark blue background should not be an issue.  Further careful attention to detail is reflected in the accuracy of these decals.  While these are “new” jets for the Blue Angels, they are still old Block I F/A-18E/F airframes (not much changes, and even “new jets” for the Blues have once again turned out to be old airframes).  Furball’s sheet is very well-researched.  Note that Blue Angel # 4 and # 5 have a uniquely clean nose for a Super Hornet.  They were both very early LRIP (Low Rate Initial Production) aircraft and lack the the low observable “pizza box” cover and evidently the AN/APX-111 “bird slicer” IFF antennas underneath it.  All the aircraft carry the team’s special 75th anniversary markings as well.  Blue Angel #7 and # 0 should have the original Block I rear cockpit, and not the Block II ACS cockpit configuration.  Speaking of the “Casper” and “Beetle Bomb” schemes, they are indeed hypothetical.  These fun “what if” schemes are call-backs.  The all-white “Casper” F/A-18F scheme pays homage to the white TA-4J flown by the team during the 1986 season.  The overall yellow “Beetle Bomb” scheme harkens back to the early years of the Blue Angels, when the team flew a yellow F8F Bearcat in an adversary role.  Perhaps one day, we will see Casper and the Beetle Bomb at airshows again.

Furball Aero-Design has done an excellent job with this decal set.  Fans of the Blue Angels and U. S. naval aviation subject matter will really find a lot of value here.

We thank Furball Aero-Design for the review sample.  You can find them on the web at http://www.furballaero-design.com/default.asp and on Facebook at https://www.facebook.com/FurballAeroDesign