Colors and Markings of U.S. Navy Tomcats Part I 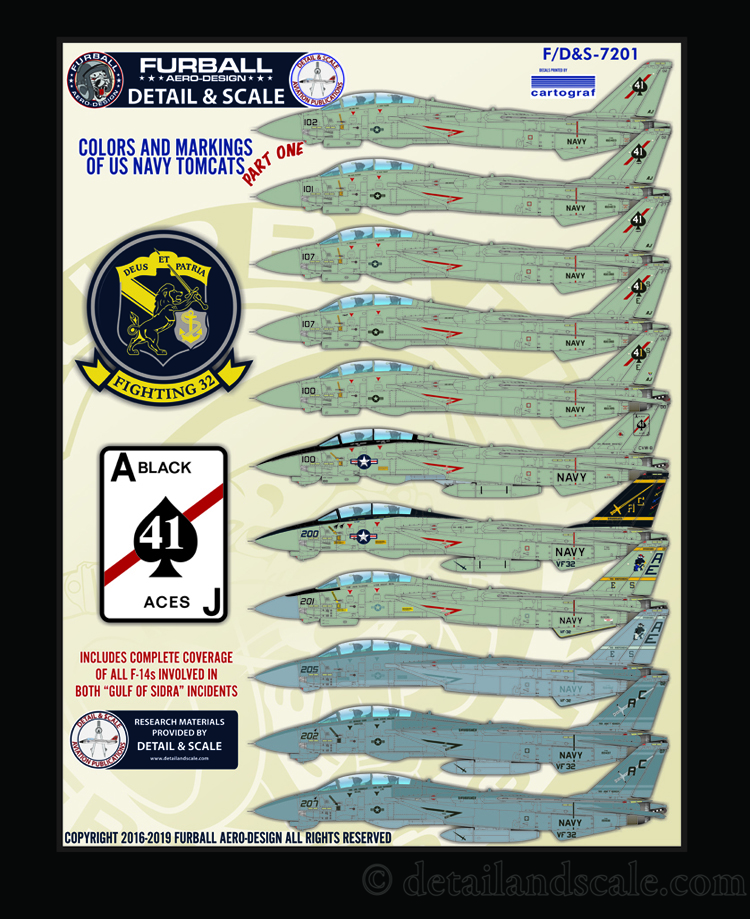 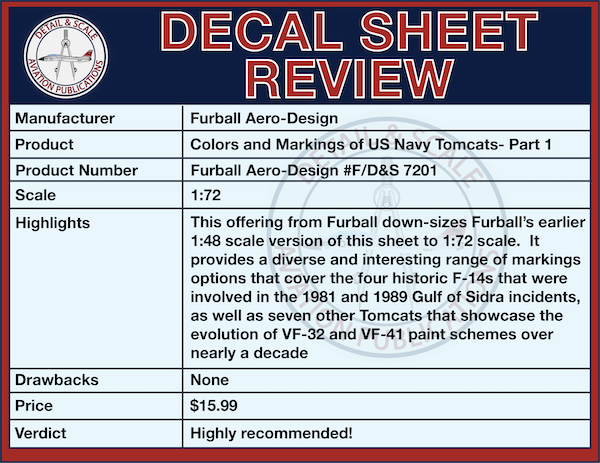 The Grumman F-14 Tomcat was the U. S. Navy’s premier fleet defense interceptor and air-superiority fighter during the final two decades of the Cold War.  Tomcats also played crucial roles in the global war on terror and Operation Iraqi Freedom before the last F-14Ds were retired in 2006.  For all the tens of thousands of combat hours and thousands of bombs dropped, U. S. Navy F-14s only employed its deadly air-to-air capability five times in combat.  Four of those kills took place over Mediterranean waters just north of Libya in the Gulf of Sidra, first in 1981 when two F-14As of VF-41 Black Aces scored against a pair of unfortunate Libyan Su-22 Fitters.  The second engagement saw a pair of F-14As from VF-32 Swordsmen downing two Libyan MiG-23 Floggers in January 1989.

Furball Aero-Design continues to produce a very popular range of “Colors and Markings of U. S. Navy Tomcats” in 1:48 scale, and now, they have released the first of these decal sets in 1:72 scale.  This is essentially the 1:48 scale sheet and artwork resized at what some readers like to refer to as “the one, true scale.”  This decal sheet was made possible with research materials provided by Detail & Scale and are designed to complement Detail & Scale’s line of digital reference books covering the F-14.  In the interest of transparency and impartiality, I wish to make it clear that your reviewer had nothing to do with the development of these sheets.

The sheet has markings for 11 airplanes:

This offering from Furball provides their typical wide range of diverse and interesting marking options that cover the four historic Fitter and Flogger killers as well seven other jets that showcase the evolution of VF-32 and VF-41 paint schemes over nearly a decade.  While these decals are sized for the Hasegawa family of 1:72 scale Tomcats, a good number (especially all of the VF-41 schemes) could probably be adapted to 1:72 scale F-14s from other manufacturers as well including the new kits from Academy and Great Wall.

The quality of the decal design is top-notch, and the printing by Cartograph is impeccable.  The decal sheet includes full stencils for two jets.  Beyond the gorgeous printing, it’s the attention to little details that impress me just as much, including the fidelity of the airframe stencils which include markings for the GRU-7A ejection seats, gun gas purge vents, and panel line decals to represent the glove vanes which the Hasegawa kit does a poor job in representing in their F-14A kits.

Overall, Furball Aero-Design does a great job with this offering and it will allow modelers to cover in 1:72 scale some of the most historic Tomcats along with other distinctive F-14s from these two squadrons.  Just when you might think the world of aftermarket F-14 decals is saturated, Furball proves that notion to be incorrect with these high-quality decals.

Many thanks to Furball Aero-Design for the review sample. You can find them on the web at http://www.furballaero-design.com and on Facebook at https://www.facebook.com/FurballAeroDesign